Editor's note: The below are intended to be general recommendations for yoga practitioners and teachers. They are not a replacement for the personal advice of a health professional. Yoga teachers should remain within their scope of practice: This means not attempting to diagnose, treat, or offer medical advice to students.

If you have sensitive knees, you may have discovered that every yoga pose won’t work for you exactly as-is. You may be unsure, however, exactly how to vary poses in order to make them more comfortable.

According to physical therapist Bill Reif, author of The Back Pain Secret: The Real Cause of Women's Back Pain and How to Treat It, when it comes to minimizing knee discomfort, there is one big caveat: Do not place more pressure on the knee than it can comfortably handle. Pressure can derive from a deviation from your optimal alignment, from the degree to which the knee is bent or turned, or from the amount of weight the joint is asked to bear.

The following pose modifications aim to remove pressure from injured or vulnerable knees in order to make poses more accessible and comfortable.

1. Find the degree of bend in your knees that works for you.

“For those with some knee issues, the greater the bend to the knee, the greater the discomfort,” says Reif. “Some people may be better off not even approaching the 90-degree bend often given as a goal in poses like warrior I and II.”

However, Reif amends that for others, for instance, those with patellofemoral syndrome (pain near the kneecap, sometimes called “runner’s knee”), deeper bends may actually feel better. “This is not an absolute—it depends on many factors, and many people with patellofemoral syndrome have pain throughout the range of knee movement—but, generally, the deeper the bend, the more contact the patellae has with the underlying femur. And the greater the contact area the lesser the load per inch.”

Experiment with bending the front knee less or more than usual in poses like warrior I, warrior II, and squats, and see what feels best for you. Any feeling of discomfort or strain in your knees would likely indicate that your knees have bent too much. “Learn where your ‘edge’ is and don’t go over it,” Reif advises. 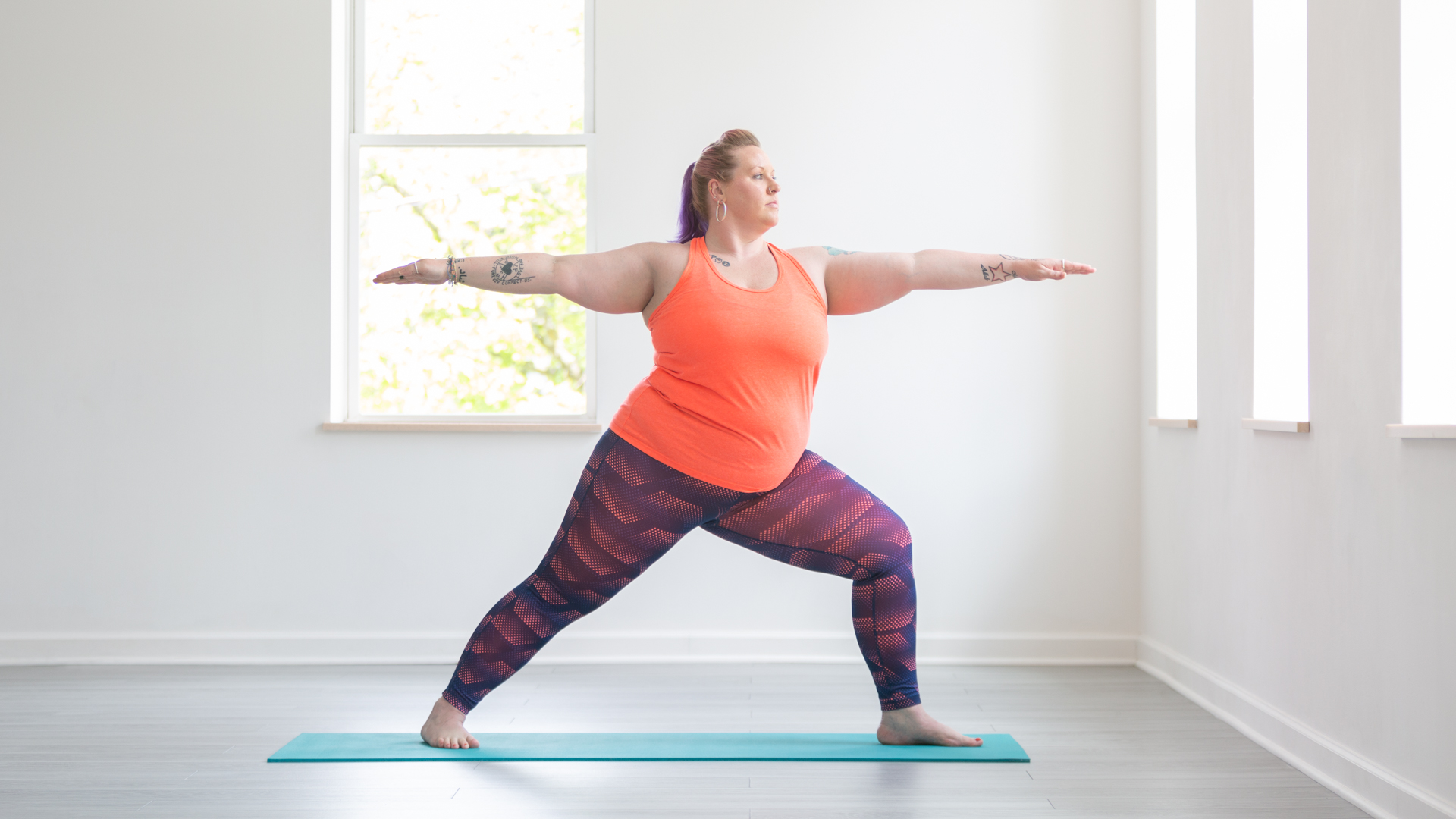 In poses like warrior I and II, experiment with more or less bend in your front knee and find what feels best for you.

2. Don’t worry about “heel to arch” alignment in poses like warrior II.

The foot alignment generally suggested in externally rotated standing poses like warrior II, reverse warrior, and extended side angle may make it impossible for those with knee issues to track their knees toward the center of the front foot. If your front heel is in line with the arch of your back foot in warrior II or similar poses, Reif says, and “if you are unable to externally rotate the front leg fully, the medial [inner] knee will be pulled inward.”

Instead of arranging yourself on a tightrope in poses like warrior II, if your right foot is forward and the left back, try moving your right foot farther to your right, so your stance is heel-to-heel—or wider—rather than heel-to-arch. 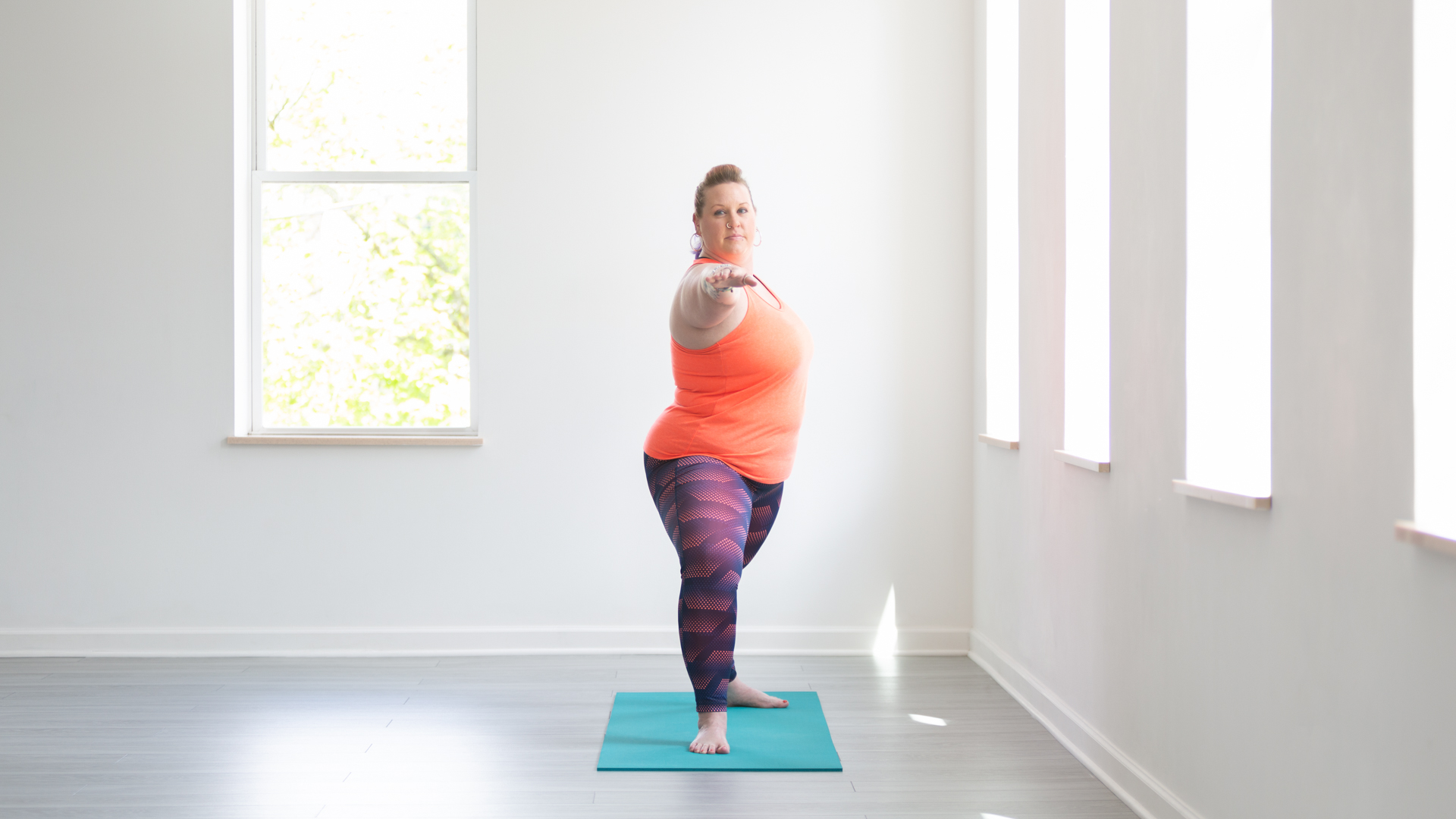 3. When necessary, use support in standing balance poses.

In standing balance poses like tree, warrior III, and half moon, all the body’s weight is moving to the standing leg and wobbliness could disrupt your optimal knee alignment. Reif says, “There’s 100% reliance upon that standing leg in these poses, which can make them more stressful to the knees than warrior I and warrior II,” poses where the weight is evenly distributed between both legs.

If you are at all unstable in a balance pose, hold on to support while honing your knee alignment, or keep the foot of the leg that usually lifts down as a kickstand. 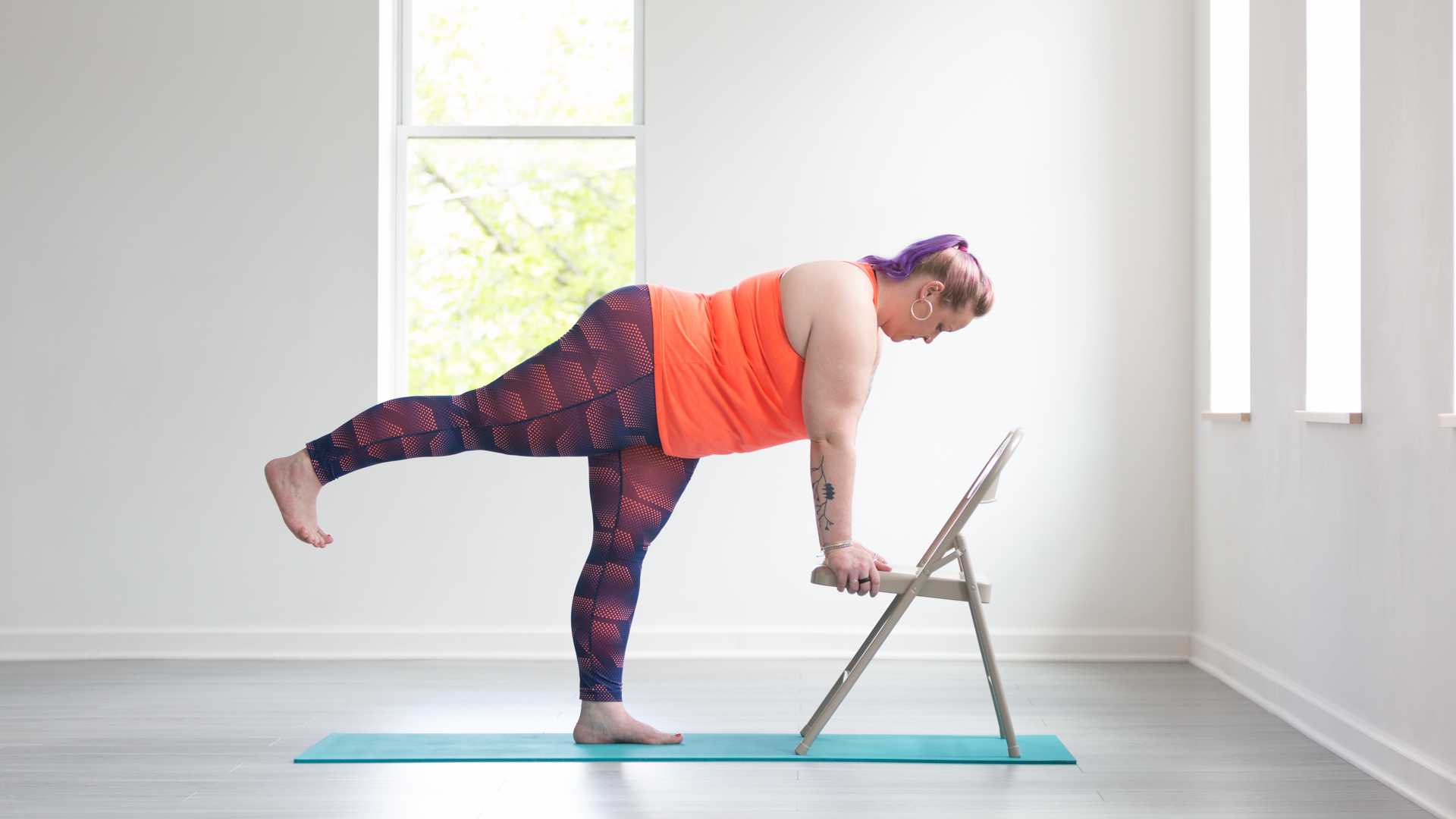 4. Avoid placing pressure from your hands (or your foot) near your knee.

According to Reif, for those with knee problems, sideways pressure from the foot near the knee of the standing leg in tree pose could be injurious, as could too much weight in the hand resting near the knee of the straight leg in gate pose. Additionally, placing your hand on your shin in triangle, or placing hands to your shins in half forward fold without mindfulness could encourage misalignment. “Hand pressure to the tibia could cause hyperextension,” Reif points out. (However, placing your hands on your shins lightly, and then pressing your shins forward into your hands, would probably be just fine.)

In tree pose, try placing your lifted foot on the ankle or shin of the standing leg, or bring it to your thigh (and feel free to touch a wall or chair for balance). In gate and triangle, try placing your hand on a block instead of on your shin, or keep your hand very light. In half forward fold, you could use blocks to support your hands, or press your shin(s) forward into your hands until the shin bones are vertical and your quadriceps engage (or just bend your knees). 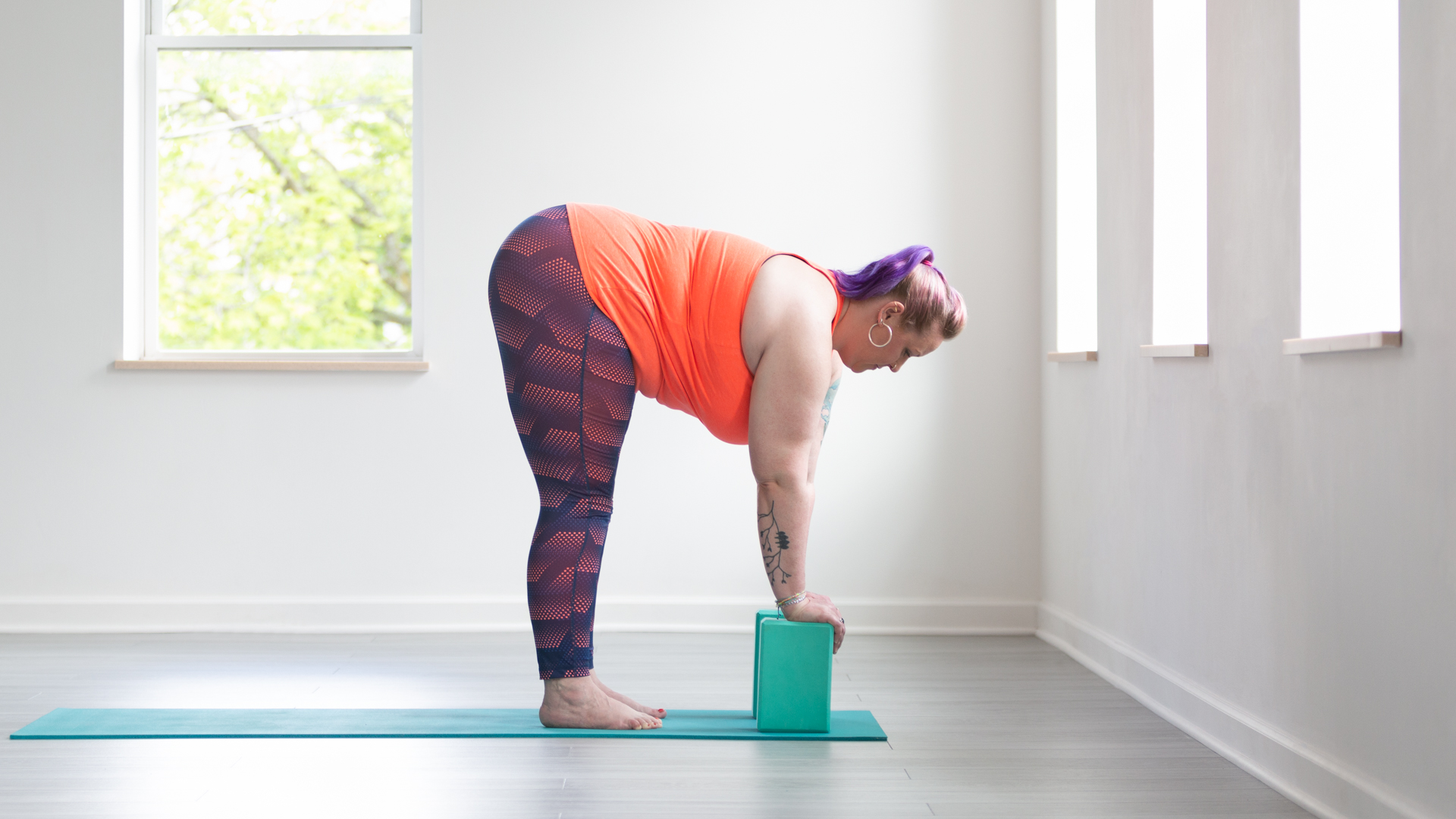 Half forward bend with blocks 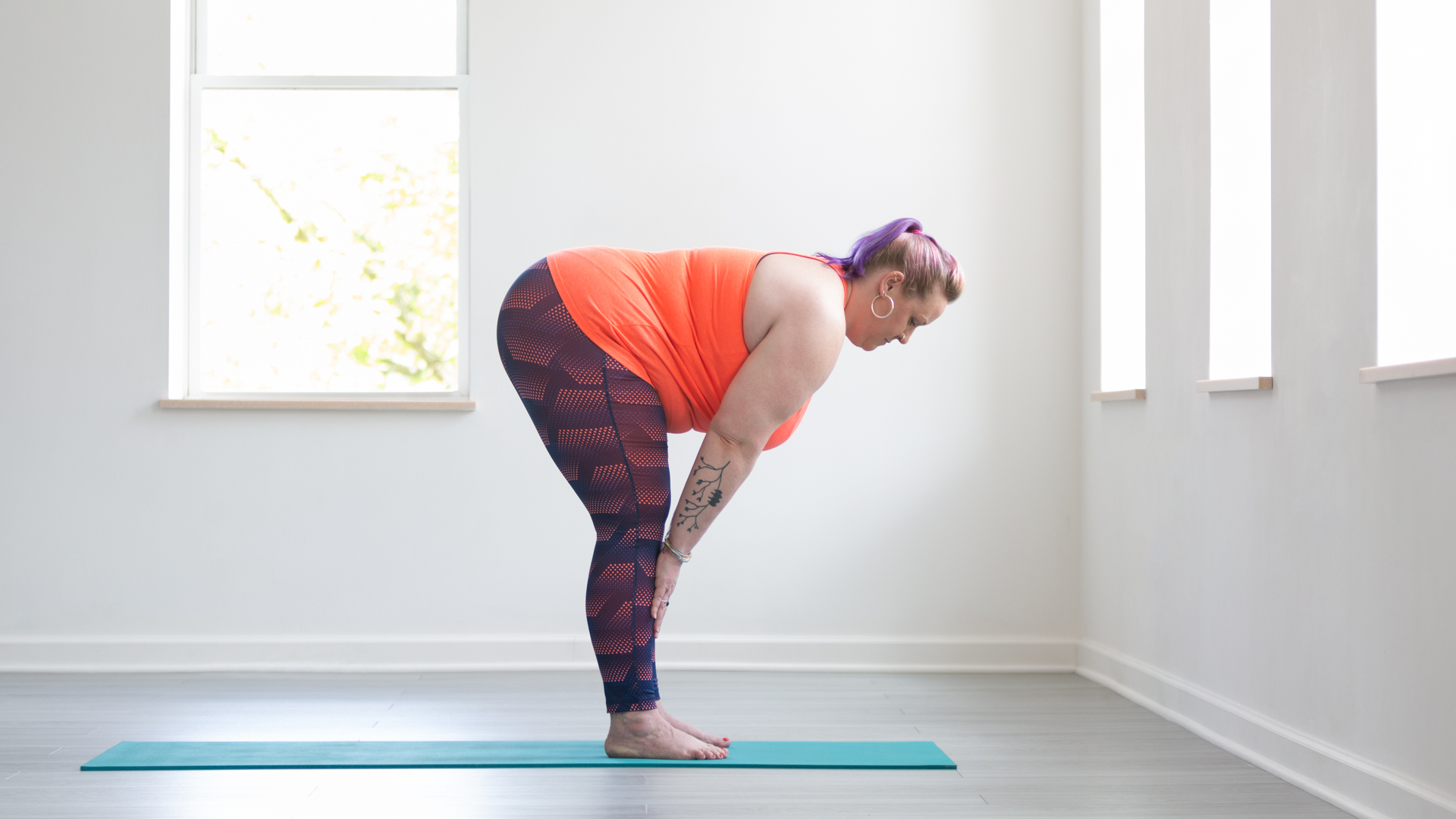 5. Pad the shins when the knees are on the floor, even if you are not feeling strain.

In kneeling poses, Reif suggests that those with any kind of knee issues place padding under their shins (not under the knees themselves) “to keep the patellae free from any ground contact,” whether or not they feel discomfort in the moment.

“Pain here is often delayed, so you may not know at the time that you’ve put too much pressure upon the patellofemoral space,” says Reif. For some students, padding the shins only may actually cause more weight to slant into the kneecaps; if this happens for you, feel free to pad the knees as well as the shins.

Try this in poses like lunges, tabletop, and camel, and other kneeling positions. 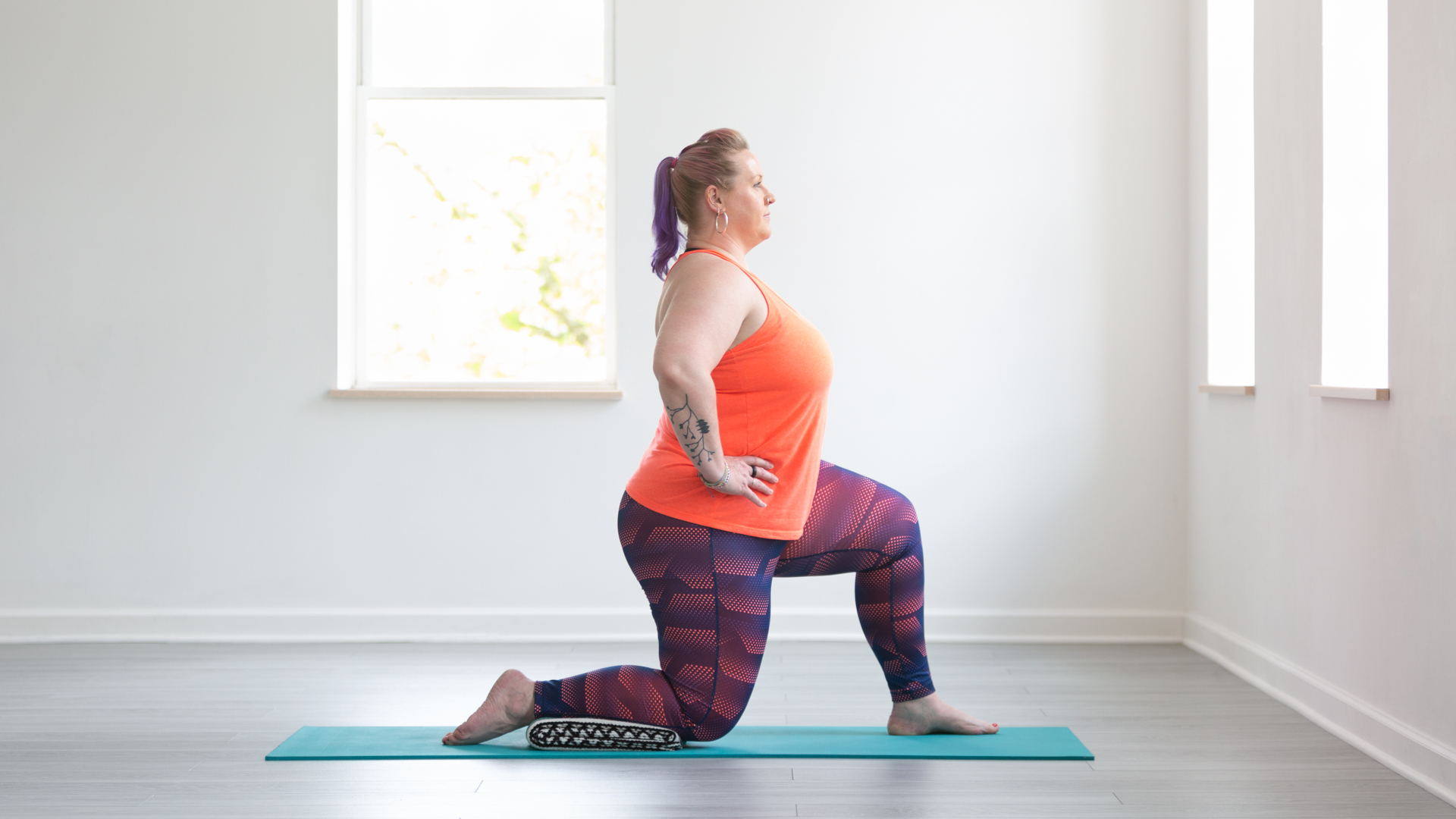 Many people with knee issues find it uncomfortable or impossible to bring their sitting bones to their heels in poses like thunderbolt pose (vajrasana) or child’s pose. Instead, you can use props to bring your seat up higher and decrease the knee flexion required. (And place padding under the shins to take pressure off the knees).

For instance, to set up for child’s pose, place a blanket under the shins, and a bolster crosswise over the shins. 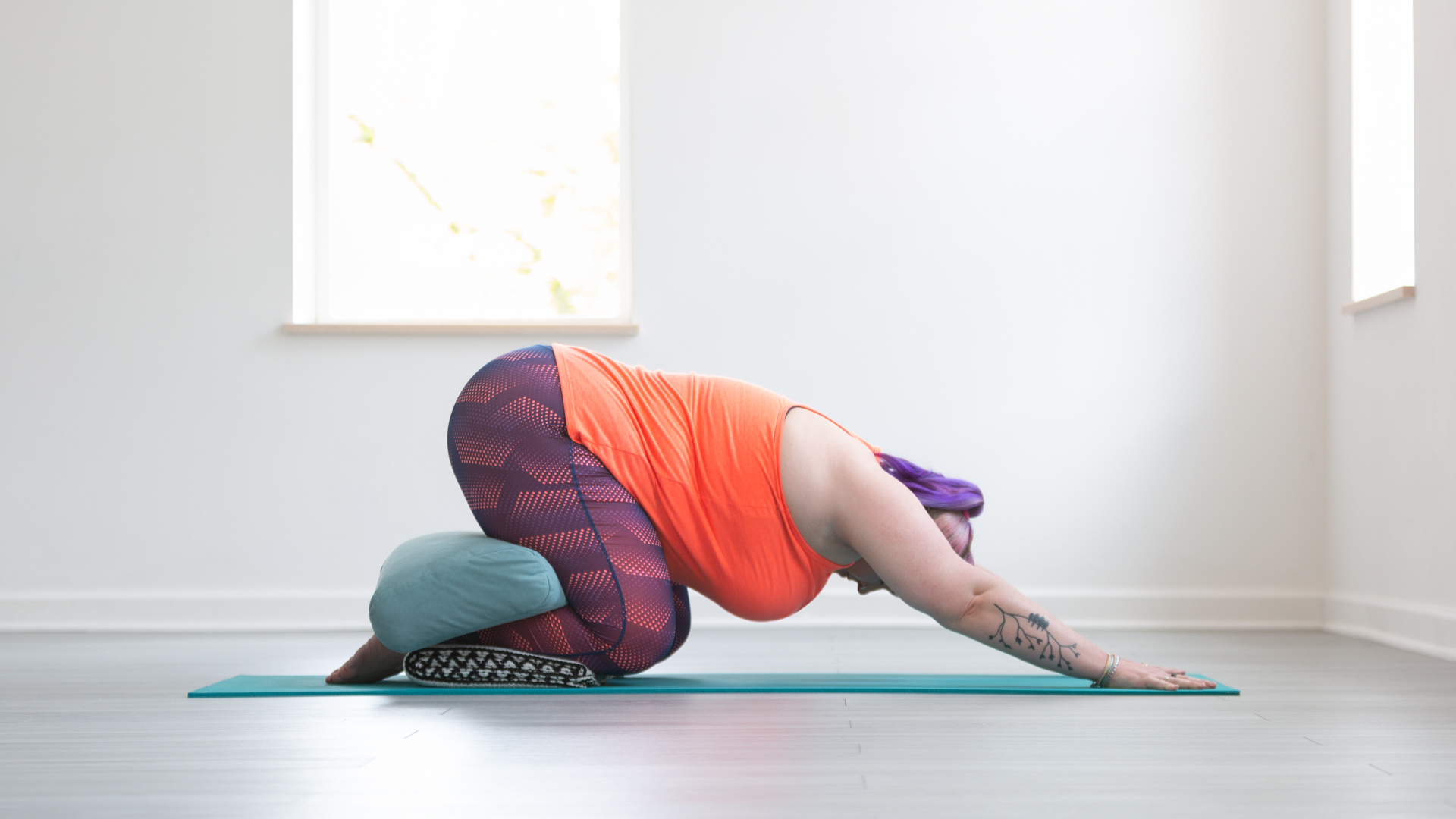 “The knee is a hinge joint, which means it is mainly supposed to move into flexion and extension,” says Reif. But hero pose (virasana), bharadvajasana, and lotus pose (padmasana) require a twisting, or torqueing, of the knees. According to Reif, this typically isn’t an optimal movement for “anyone who didn’t grow up doing it.” He explains: “Torque on the ligaments leads to overstretching. Ligaments function to protect a joint, and you are potentially diminishing the stability by overstretching.”

If you did not grow up moving your knees in this way, and you feel discomfort as a result of any knee rotation, skip those poses that require it. Instead choose seated poses in which the knee is not turned—for instance, choose thunderbolt pose over hero pose or lotus, while sitting on support to decrease the knee flexion. Reif adds that in externally rotated standing poses like warrior II, an attempt at “hip-squaring” could also lead to a torquing of the knees. He says, “Do not square the hips at the expense of knee alignment.” Instead, let the back-leg side of the pelvis move forward. 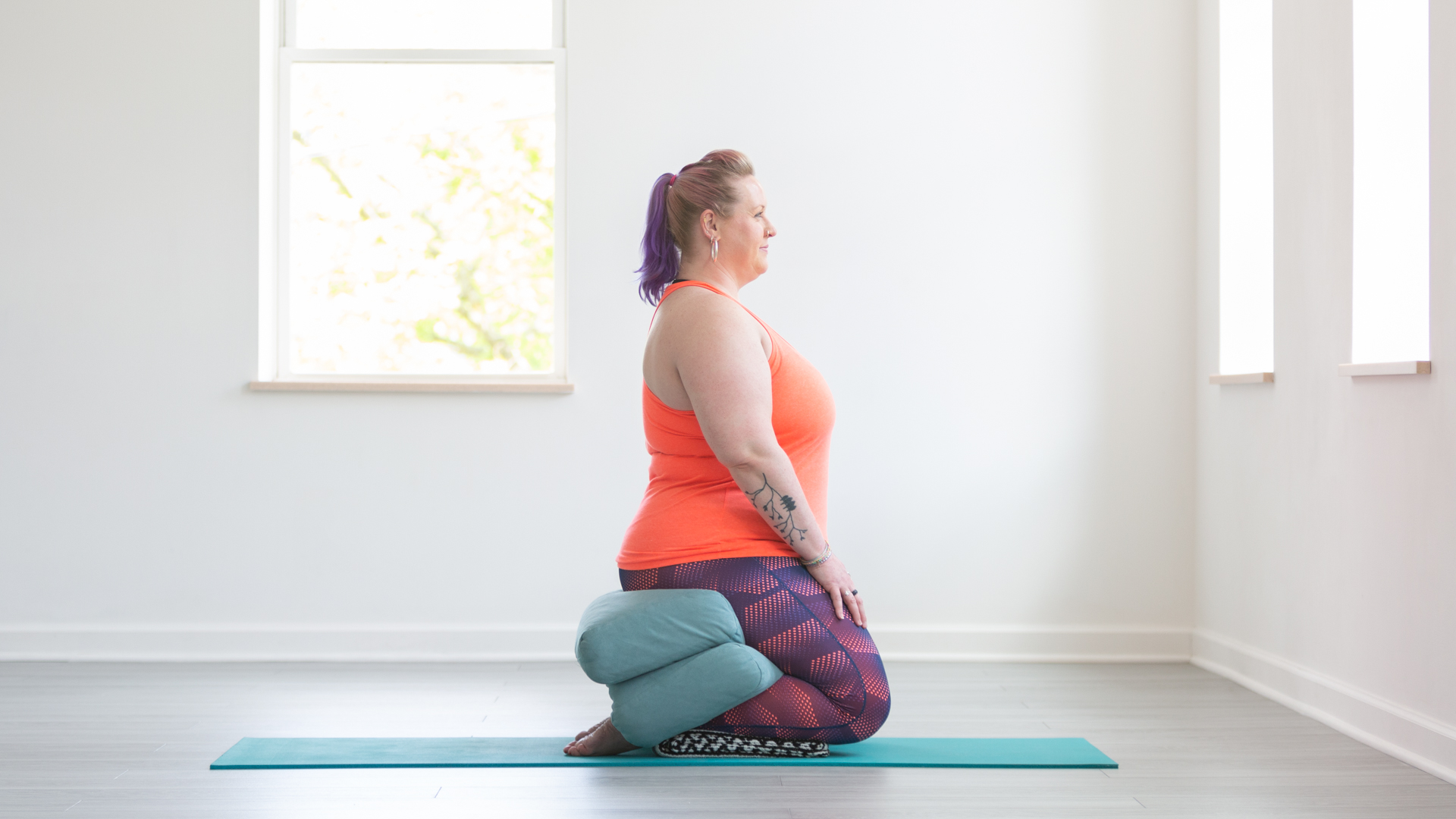 8. Skip the foot- or ankle-grab in poses like dancer, bow, and pigeon (even with a strap).

Reif notes that there is the possibility of torquing the knee when grabbing the foot or ankle in poses such as these: “Many people with tight psoas and quadriceps will have to strain to reach the ankle/foot, turning the knee out and placing stress on the medial [inside] aspect of the knee.” It may also be impossible for some to grab the foot or ankle, because doing so requires a depth of knee flexion that some knee problems simply won’t allow.”

A strap is also no panacea; as Reif points out: “The strap might even give you more leverage than your hands. Unwittingly pulling too hard on the strap could exacerbate joint problems.”

The next step in the ankle-grabbing poses is often to “kick back”—pressing your ankle toward your hand, which could aggravate some knees. “You may exceed the physiological limit of the joint when you add that extra resistance force,” explains Reif.

So, if any aspect of grabbing your ankles bothers you, skip it. You may even find that some poses can be both more challenging and more rewarding without it. For instance, instead of grabbing your feet or ankles in bow, lie prone, with arms at your sides, and your knees near each other and bent (soles of your feet toward the ceiling). Then lift your heart, shoulders, and arms, and attempt to lift your knees up off the mat. 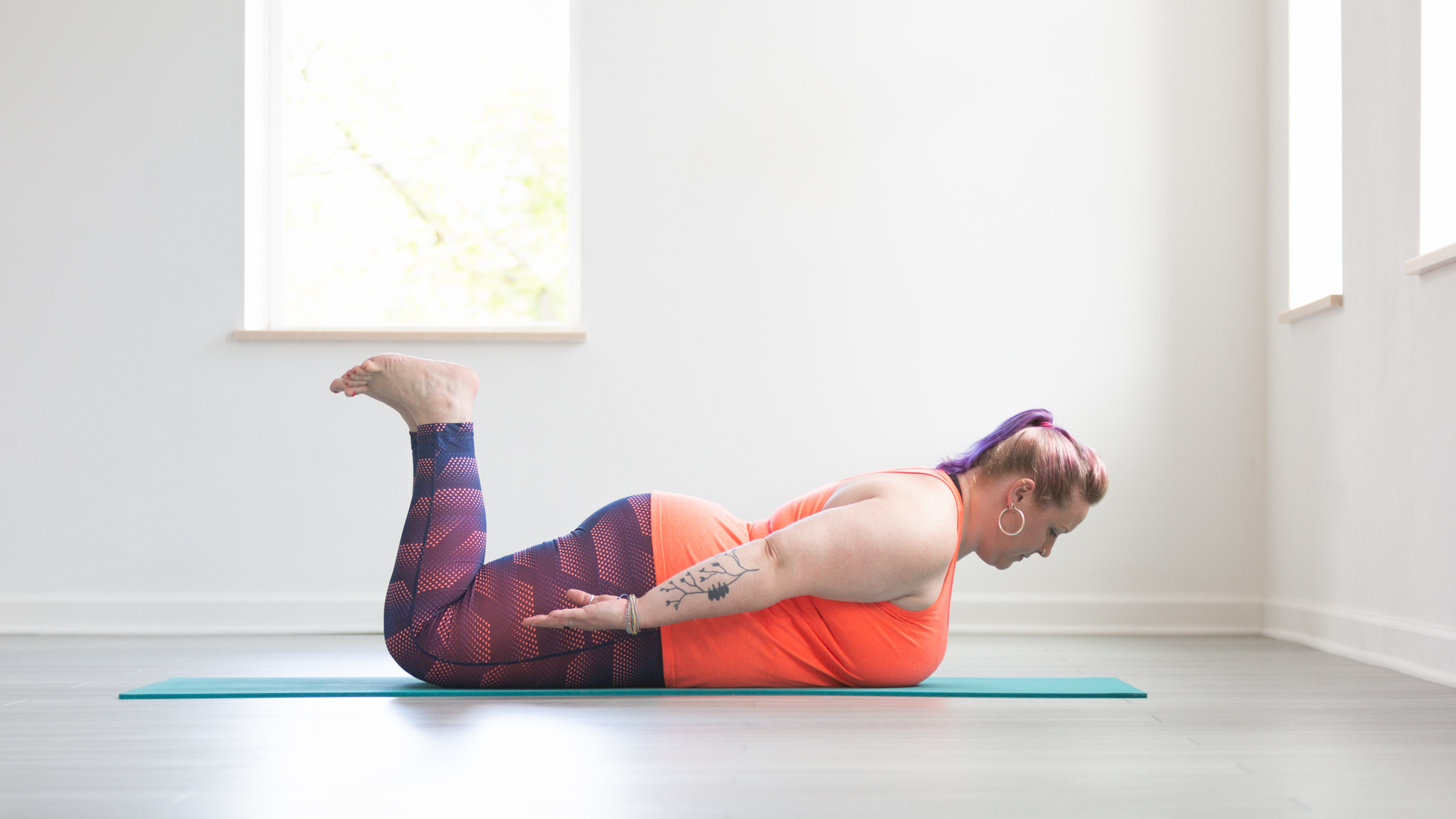 If your knee is lifted off the ground in head to knee pose (janu sirsasana) or fire log pose and you feel strain in your hip, knee, or groin, you may want to put support such as a blanket or block under your thigh (or under your knee, if that feels better to you). Reif says, “If the knee is hanging for too long the stress may be placed upon the inner thigh, adductors, and groin. If the knee is no longer in line with the middle toes, the knee could torque.”

While Reif says those experiencing strain should definitely pad the knee, not using support “will gradually allow an increase in mobility.” So, if your knee is not bothering you, let it float. But have a block or blanket nearby, and if you do begin to feel discomfort, experiment with placing padding under your leg in the areas where it’s most needed. 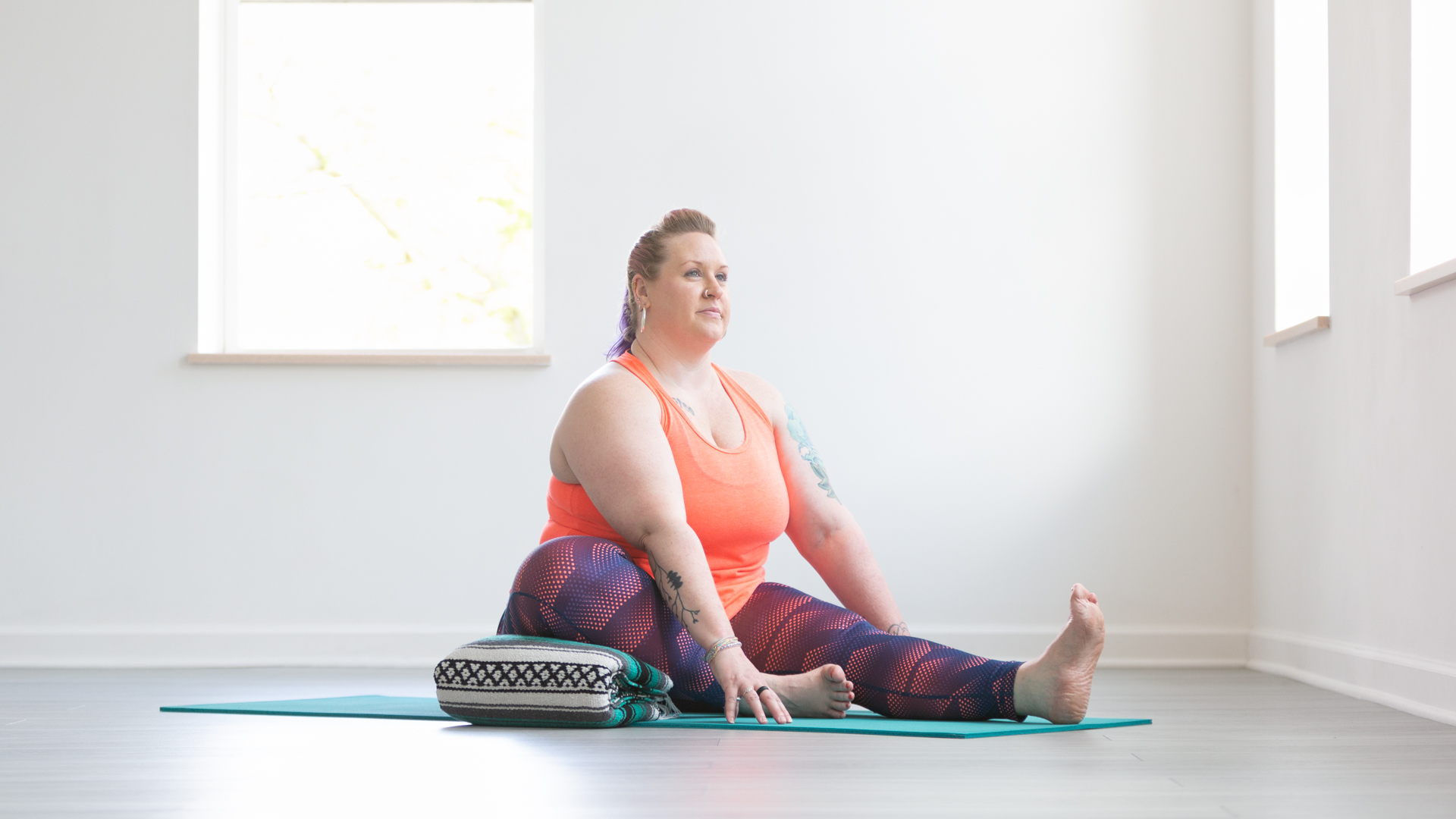 10. If necessary, take all weight off the knees by practicing supine versions of some poses.

Many of the suggestions above aim to take weight off the knee, but they do not remove weight entirely. While practicing poses lying down will reorient you to gravity and change the effects of the pose, one of the positive effects will be the absence of any weight on the knees. 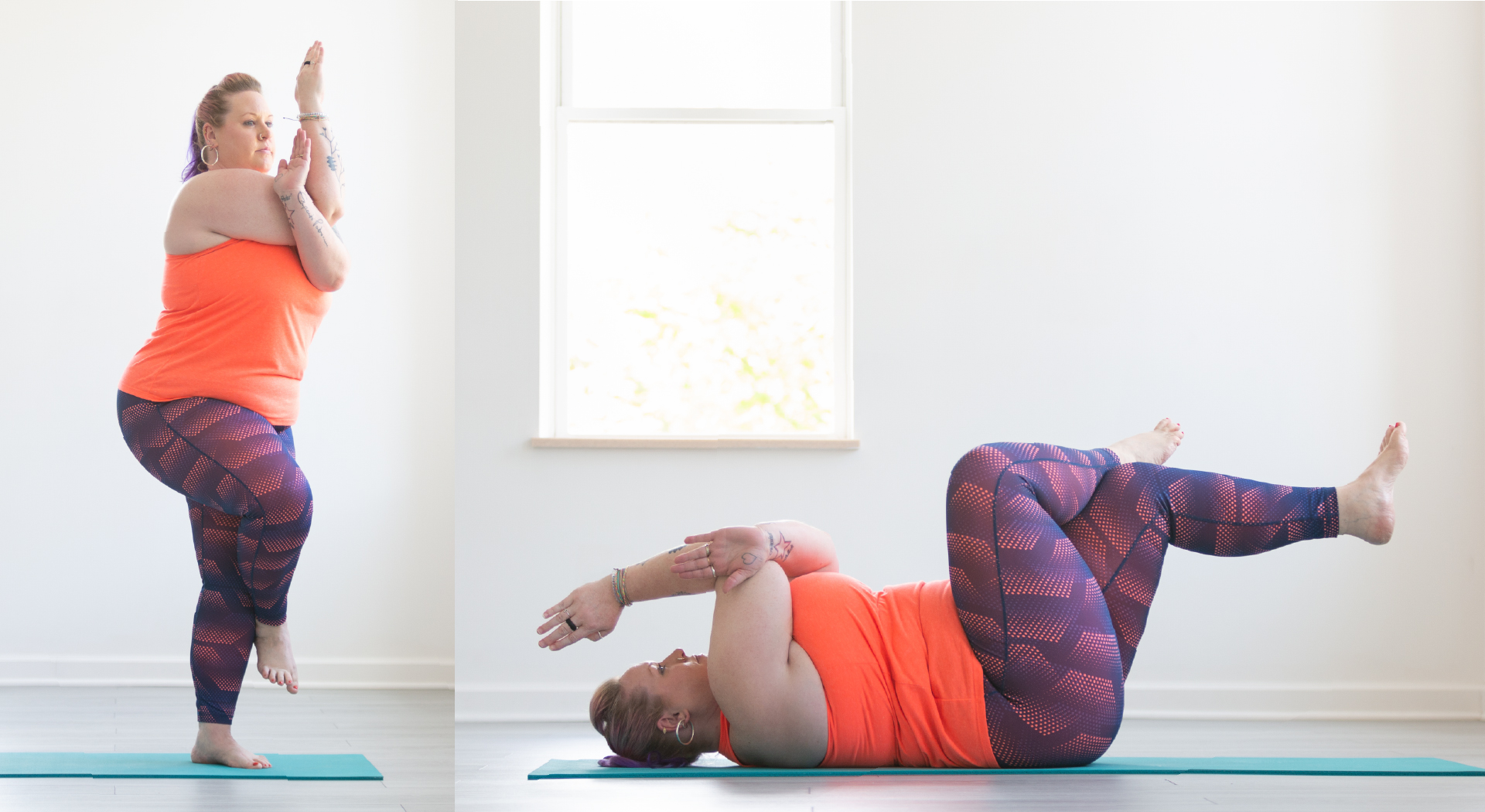 Eagle pose (garudasana) can be done standing up or lying down. 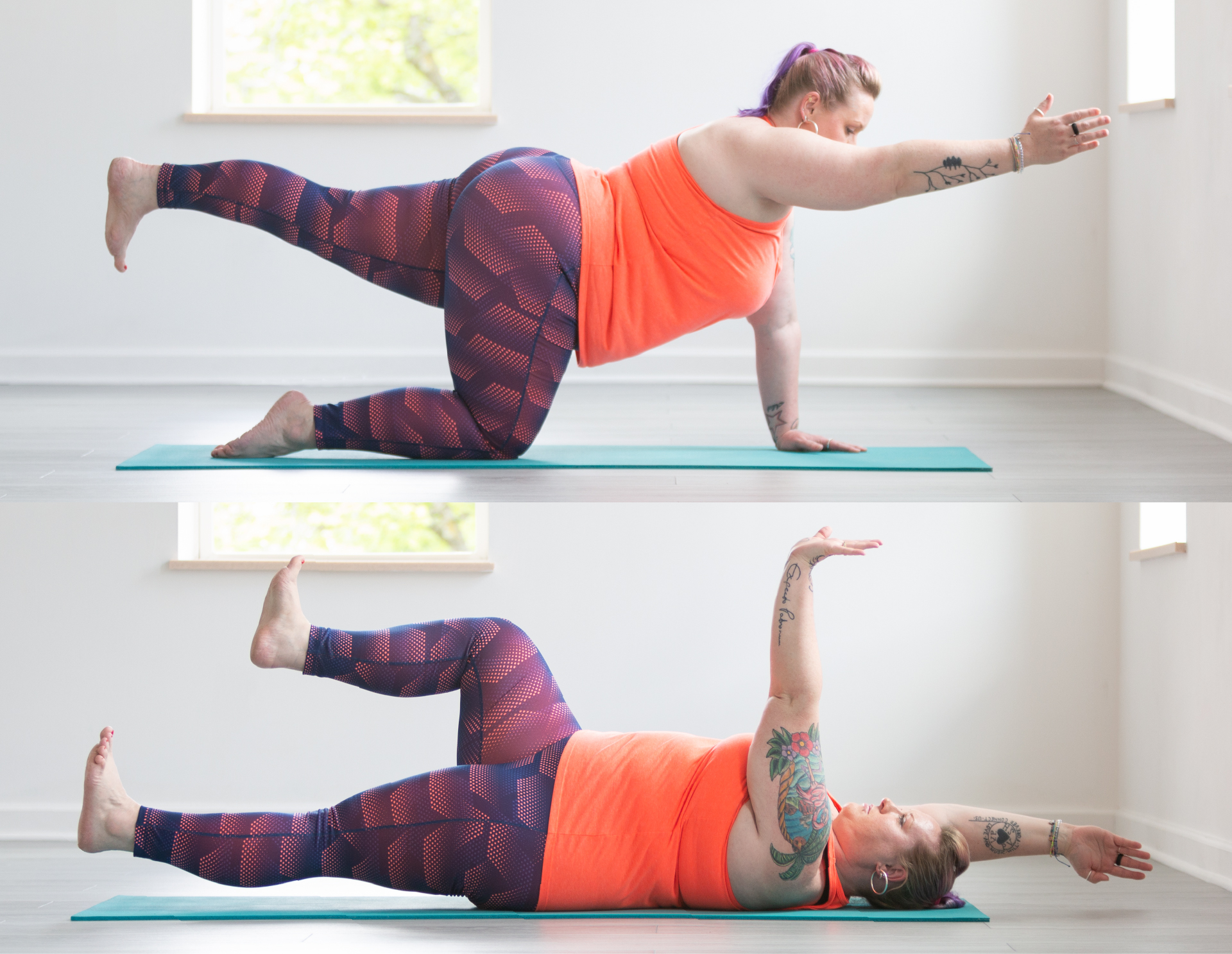 If kneeling bird dog bothers your knees, try it lying down instead.

Experiment with these modifications, and see if any of them make the difference between a practice that’s just bearable, and one that is comfortable, effective, and rewarding.

It’s possible that by adapting poses to accommodate your knees, you will help to ensure the longevity of your knees as well as your yoga practice.