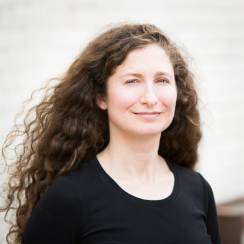 I felt the summer heat on my bike handles as I sped home. I had just finished teaching my third Ashtanga vinyasa class of the day. My bike ride was usually fun and I had an evening planned with friends. So why did I feel so grumpy? I became frustrated with myself.

I tried to bury my feelings, but they were a symptom of a deeper problem. A fog of sleeplessness, muscular tension, and depleted immunity had begun to cloud my life.

Despite all of the profound benefits of the physical yoga practices I had enjoyed for the past nine years, I was increasingly fighting cycles of insomnia, bronchitis, irritability, and failing eyesight (that required a prescription a good 20 years before my parents had). I was flexible and strong, but exhausted.

It was during this time that I signed up for a course with Judith Hanson Lasater on the vertebral column. There I experienced Restorative Yoga for the first time.

I had previously been to some great classes that I thought were restorative. After studying with Judith, I realized that those other classes were more like yin yoga classes with music—wonderful sensory experiences, with held stretches. Though I had enjoyed those classes, I knew that I hadn’t rested deeply during them. That was an empowering realization.

Judith taught me that Restorative Yoga is the supportive use of props that facilitate resting in deep ease for long periods of time. I learned how to be still, and I felt my health responding—and changing. On the last day of the course she gave my hand a quick squeeze, as she sometimes does with students, and she said: “Will you do this practice?” I said “Yes!”

Six months later my insomnia was gone, along with much of my irritability. After about a year I stopped getting the terrible colds I used to get regularly. As if all this weren’t enough, my vision improved! According to my optometrist, there is often a correlation between exhaustion and poor eyesight, which makes a lot of sense if you think about it.

I was amazed that I’d found a gateway to greater health as well as increased compassion and presence. And, extrapolating from my own experience, I realized that Restorative Yoga was just what the world needed. I continue to study with Judith and have now been teaching and practicing Restorative Yoga for the past 18 years (though I still practice and teach other forms of yoga as well). My conviction about its universal benefits has not waned.

Regardless of where we live, most of us are exhausted by modern-day life. According to the American Institute of Stress, 55 percent of Americans are stressed during their day. The American Academy of Sleep Deprivation reports that 30 percent of adults in the U.S. regularly get insufficient sleep. Most of us forge ahead (as I did) without recognizing our need to heal and rest.

Restorative Yoga is, in my opinion, one of the simplest and most straightforward practices we can do to alleviate that exhaustion and its debilitating side effects. It’s also a great way to get our daily dose of necessary relaxation in order to balance the nervous system to combat stress. But even though Restorative Yoga offers so many benefits for so many people, it’s not always totally clear what it is and how to practice it.

In my years of teaching and studying Restorative Yoga, I have encountered three common misunderstandings that have served to spread confusion about what this practice actually is. I would like to address these misconceptions so that you can better understand Restorative Yoga and hopefully benefit from it as much as I have.

Misunderstanding #1: Restorative Yoga is a sequence of many poses that are held for two to 10 minutes each.

By their nature, restorative poses are intended to invoke ease, and so they demand ample support for comfort during the long hold times. Resting in a pose for 20 minutes or longer is a core part of the practice, although some poses are held for less time, and our nervous system is able to do deep healing work during these uninterrupted periods of ease, comfort, and safety.

Whether the method is hatha, yin, or vinyasa, most asana (the physical yoga practice) has some element of stretching. Restorative Yoga is different. As my teacher Judith is known to say: “Restorative Yoga is not about stretching, it’s about opening.” It’s about supporting the body to facilitate states of ease and soft, open release. Sometimes there may be a mild stretch, but that is not the goal of the asana.

In order to balance out our preconceived notions of stretching, it may be helpful to think of the passive positional release techniques used in massage therapy. Judith would sometimes mention the work of Moshe Feldenkrais when showing some restorative support—a deep field of study which has some crossovers with passive positional release at times. When a muscle is fully supported without any kind of effort (including a stretch), only then can it fully let go, rest, and heal!

Try this exercise: Place your elbows on a supportive surface and catch your temples firmly with the palms of your hands. Let your head gradually release more and more, becoming heavier in your hands over the next minute; let your jaw go slack. Can you see how the stability provided by your hands enables a release that becomes ever more powerful the longer you stay? You may have thought that you were relaxing at first, but the longer you remained in the pose, the more you could trust and let go. This is a tiny example of what happens to your whole body in increasing waves of restfulness as you lie supported in a Restorative Yoga class.

Misunderstanding #3: Sensory stimulation is a beneficial—or even necessary—part of a restorative class.

Researcher and yoga teacher Roger Cole has documented the importance of sensory withdrawal so that we are not distracted with stimuli that may invoke stress. Restorative Yoga is ultimately about finding deep states of ease in mind and body. This can actually be achieved only when the senses are not being stimulated. Any kind of sensory aid that may be enjoyable as a means of guiding you into the state of relaxation—such as music, massage, poetry, and scents—eventually becomes a hindrance to going deep. We can’t be stimulated by the outside world and turn inside at the same time.

In short: Restorative Yoga is a practice in which deep relaxation arises because of wonderfully supported rest in stillness without the senses being aroused.

Restorative Yoga is often confused with other styles of yoga, in particular yin. Let’s take a look at just a few of the differences between these two styles of yoga: 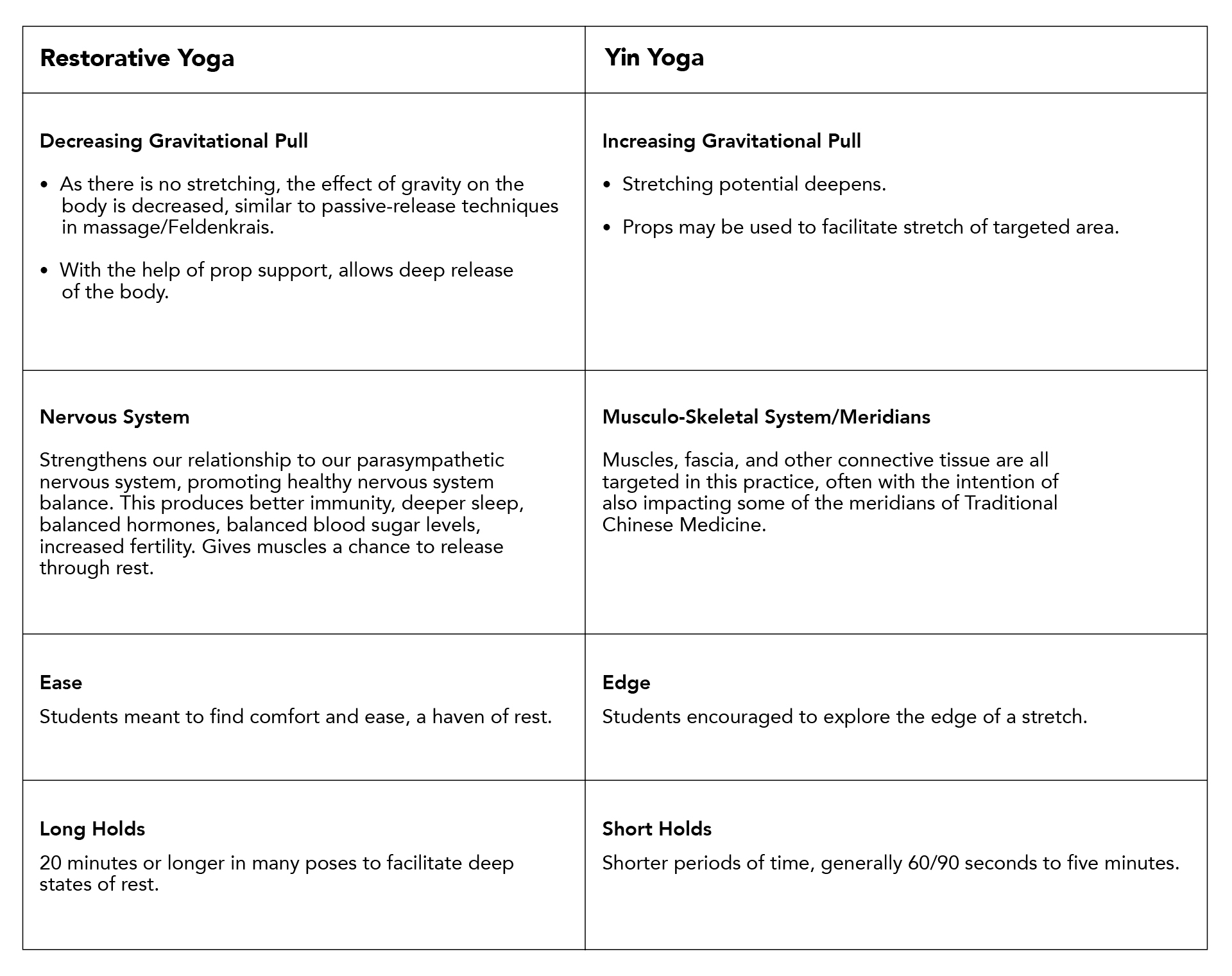 In this comparison we can see that these practices—though each valuable in their own way—are actually quite different from each other!

In a world so unfamiliar with true rest, it is understandable that these practices, both of which often entail lying on the floor and being assisted/supported by props, are easily confused. Anything that brings us even a taste of rest is welcome relief for us, and distinctions can seem less important. I also don’t think most people know what having a balanced nervous system feels like. As a friend with whom I just shared some elements of Restorative Yoga said to me: “You think you know what resting is, but you don’t”—I would add, until you experience Restorative Yoga from a well-trained instructor.

Our lives are so complicated, so fraught, so busy. We rush from one activity to another with little or no chance to rest and recharge. Our immunity, mental health, relationships, and sheer joy in life suffer as a result. What a difference it could make if each of us were to feel completely supported, safe, and at ease in order to facilitate healing and a letting go toward deeper states of presence for even 20 minutes each day!

This practice has had an enormously positive impact on me and my busy life. I am healthier, happier, and much more connected to ease. I wish the same for all of you!

Smitten with yoga at age 15 and teaching since age 22, Andrea has 18 years of teaching experience and... Read more