4 Ways to Transform Your Triangle Pose

Utthita trikonasana (triangle pose) is a fundamental pose in nearly all yoga styles, and may well be something you do every time you practice. It flows well in vinyasa and creates an open, spacious feeling. But if it has become a stagnant ritual in your asana routine, or if you have lingering pain in the hip or sacroiliac joint when coming out of it, it may be time to practice trikonasana as if it were your very first rodeo.

Many yoga students report that they feel pain in their hip sockets (like a pinching feeling) or SI joints (typically felt in the lower back and/or hip, and may radiate into the groin area) during or after triangle pose. It might be tempting to simply avoid the pose. Still, master teachers laud the benefits of trikonasana. And I can say from experience that triangle has the potential to teach us a lot about the human body—the relationship between the front and back of the body, between the pelvis and the spine, and between the inner and outer foot for example. I think it’s probably worth keeping in our repertoire but perhaps with a few adjustments.

SI-joint or hip-joint pain experienced during or after triangle can often be traced back to the way we entered the pose. The practice of coming into triangle by jutting out the back hip and lengthening the upper body away from it (“as though sliding the hand across a countertop”) puts a lot of weight on the SI joints. Because both feet are anchored in triangle (unlike half moon for example), and there is often an emphasis on rotating the upper half of the pelvis into an open position, the SI joints are working independently rather than together. That weighted asymmetry can contribute to painful hypermobility in the joint(s). Sometimes simply allowing the back thigh to rotate inward and practicing with a higher support under the bottom hand can help—but even then, there is still torque on the top SI joint. And often, as the SI joint becomes hypermobile, the hip joint tries to compensate for the increase in sacral mobility by wearing the structure at the socket (acetabulum).

Here’s where that one-size-fits-all methodology gets an update: Instead of the “hip bump,” you can come into triangle from parsvottanasana (pyramid pose) or a low lunge, establishing the posture from the ground up instead of hinging to the side. Or, if you'd still prefer to come into the pose from standing, simply "side-hinge" without the bump, and let the hand land where it lands—even if it's not as close to the floor as you may be used to.

2. The “Two Panes of Glass” Cue Doesn’t Work for Everyone

I’ve never been a fan of the oft-given “pretend you’re practicing triangle between two panes of glass” cue—where the back of the head, ribs, and buttocks (including the front-leg buttock) are all supposed to be in one plane. I even thought of it as two “pains” of glass as my fellow students and I lined up with backs to the wall in trikonasana, while the top pelvis was pressed to the wall by instructors and assistants. My hypermobile hips went along with the adjustment, but it hurt. As a result of these adjustments (and the aforementioned hip bump), the clicking and clunking began for me—even in simple twisting postures.

Many of my comrades never had a problem with the sharp angular variation of the pose, but we don’t drive the same car either. Bottom line? Don’t force your body to practice in this way if it doesn’t feel good. And teachers, please don’t press students’ pelvises back in triangle pose! It can be really painful, and may lead to long-term problems.

3. Let It Be Lateral

It’s often taught that both sides of the torso should be of equal length when practicing triangle pose. But lateral movement of the spine is actually quite healthy, and trikonasana with a side bend can be a great option. I learned this variation first from Rod Stryker, and later through the Viniyoga tradition.

When you come into this version of triangle, there’s no hip bump. Instead, let the lower torso contract and the upper rib cage arc, while keeping hips and shoulders in the same plane. This provides a more sumptuous stretch to tight intercostals—especially when breath is directed to the expansion of the ribs. The ego-gratifying “hand to the floor” is unlikely in this type of trikonasana, but I find that I’m able to access a deeper breath following the pose. (You can also extend the top arm alongside your ear instead of straight up in this variation.)

I remember a training I attended with Stryker in which he said, “Is this the only way to do trikonasana? No, it’s one way to practice.” We practice postures in different ways to address different needs. 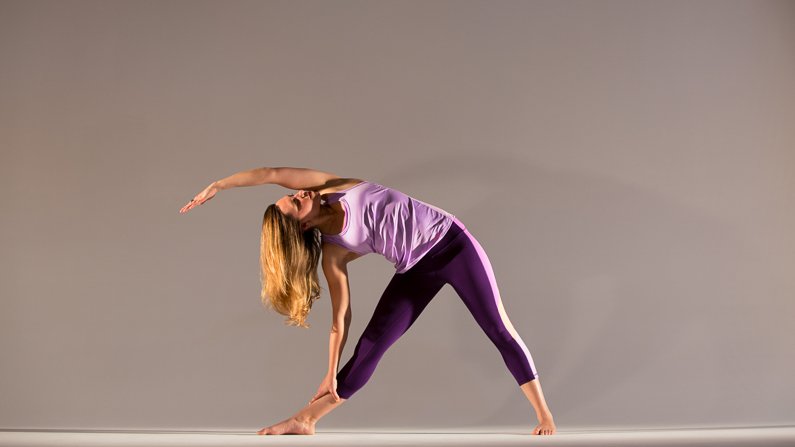 The breathing and nadi-opening benefits of trikonasana are tangible. Try this: Check your nostril balance by closing one nostril at a time and inhaling and exhaling through each side, noticing if one side feels more clear, open, and easy to breathe through before moving into the triangle that works for you. Then check how your head/eyes/ears feel after doing one side. Imbalanced, right? Then check your nostril balance again. Any change? Now practice on the other side and observe again the effect on breath balance. Perhaps you’ll see more evenness in the flow of breath on both sides.

The genius behind standing postures is that they strongly impact the balance of the nadis (energetic channels, known as meridians in Chinese Medicine). Triangle pose, almost uniquely, has the benefit of stretching directly down the interior arm through lung meridian and impacting breathing quite directly.

Another huge element of trikonasana is the application of mula bandha, or root lock. Had I been aware in the old days of the dynamic of engaging my pelvic floor, I might not have had the issues that I had with stress to my SI and lumbosacral joints. Engaging the interior of any posture can help us prevent injury elsewhere. When we engage more consciously from our foundations, we are less likely to allow flexibility to override stability.

Becoming more tuned to the energetics of trikonasana with breath and bandha helps us to customize the pose, creating the healthiest possible versions for ourselves.

Beth has over four decades experience in utilizing yoga as a healing modality, plus the highest certification... Read more