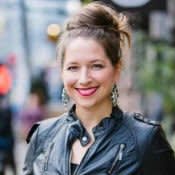 Take a look at any mainstream yoga rag, and you might think "yoga" means skinny white ladies lounging around in stretchy pants, talking about probiotics. But yoga is so much more.

The modern yoga scene is at a tipping point. Commodification and “Instagramification” have transformed this profound meditative practice into a trendy, upper-middle-class fitness craze.

It's time for populist, philosophy-loving yogis to reclaim yoga from its widespread assimilation as a sanitized, fashion-driven workout. Believe it or not, the philosophical tradition's got much wisdom to offer regarding the messy, sweaty, sacred/profane reality of being alive. Which brings us to...Fight Club. Yep, you heard me right.

Fight Club weaves together the lives of an unnamed Narrator (Norton’s depressed Everyman protagonist), his rogue frenemy Tyler Durden (Pitt, in renegade form), and Marla Singer, the woman who comes between them (Bonham Carter, playing against type as a chain-smoking vamp). After meeting Tyler on a plane, the Narrator finds his old life literally burned to ashes and given new meaning via an underground fight club spearheaded by the unruly Durden himself.

I love Fight Club for its complexity, its grit, its willingness to dive into tough questions, and its fundamental theological richness. You can come at Palahniuk's work from any angle: yogic, Christian, Buddhist, Taoist, capitalist, culture-jamming, gendered, queer, anti-consumerist, postmodern—and find in it a polemic, an inspiration, a challenge. Here are a few of the lessons it's taught me over the years. (Beware, spoilers ahead!)

Be mindful. Question reality. Choose your own adventure. Refuse to accept the scripted monoculture as your own.

Prior to meeting Tyler, the Narrator spends his days in airports and airline terminals, meeting single-serving friends, working a crap job that leaves him a miserable, depressed insomniac who sits on the john and becomes aroused by IKEA catalogs. The message?

Slap yourself across the face (literally!), wake up to this moment, break out of the samskaras (the life-denying ruts, the psychic grooves) you live in, and create new ones. You are not your patterns; you are not your history; you are never stuck. You can recreate your life in every breath, become born anew with every inhalation, and die with every exhalation.

People are depressed, over-worked, and under-inspired. With a shift to an increasingly technology-driven, work-from-home economy having largely engineered movement and manual labor out of our lives, many of us have forgotten how to feel much of anything. We shuffle from car to desk and back again, with few organic opportunities for deep experiences of embodiment. This numbness is rooted in a disconnect from the living, breathing, sweating body.

The solution? Get back into our bones. The asana-like benefits that Fight Club’s characters experience in the book/film echo the post-yoga afterglow; the physical shattering leads the characters to salvation. Even better: they didn’t need some pristine studio space. This is a reminder that all you need is a basement space (even a dingy one), your own bare feet, and a little breath.

3. Life is short. Death is real. Everything passes.

Ask the Buddha, ask contemporary Process Theologians, ask postmodernists, ask queer theorists; they'll all tell you that there's just one constant in our lives—impermanence. Every aspect of our being is in constant flux: our identities, our bodies, and our relationships, for a start.

We practice this little death every time we take  (corpse pose), acknowledging its inevitability, learning to accept that our time in these bodies is limited. Slip into sunyata (the void) and let yourself hit bottom. Lying there in the quiet, notice your heart beating and your lungs breathing, and for just these few breaths, let that be enough. You might walk away with a greater appreciation for this perfectly imperfect moment.

4. Consumer culture sucks. And you are not your stuff. So stop grasping.

Tyler Durden warns: "The things you own end up owning you. Reject the basic assumptions of civilization, especially the importance of material possessions."

Fight Club, with its unabashedly anti-consumerist and anti-capitalist polemics—and yoga philosophy, with its emphasis on santosha (contentment) and  (non-grasping)—both teach the same radical anti-materialism. Same values, different words. Tyler Durden warns: "The things you own end up owning you. Reject the basic assumptions of civilization, especially the importance of material possessions." Practice contentment.

It turns out, of course, that Tyler Durden represents the id to the Narrator's ego. As in desire. As in all the wild, unchecked, angry, hungry, anti-establishment parts of the Narrator that could never emerge in that boring, buffered cubicle life of his.

The lesson? Stop being controlled by your ego. Cease listening to the rational mind that thinks it can succeed playing by the rules. In other words, resist constant thinking. Yoga teaches us as much. An asana practice is essentially a mental vacation. Patanjali's second sutra, which defines yoga, declares, "Yoga chitta vritti nirodha": Yoga is the cessation of the misidentification with the fluctuations of the mind. This teaching—meaning, basically, don't get attached to your thoughts—reminds us to come back to this moment, to slip into that still quiet space of the now, and to cease planning the future or obsessing about the past (hello, ego!). Just be right where we are.

Sometimes the best yoga teachers appear in the most unexpected of places. Keep your eyes open: there are gurus all around—if we're willing to see them. They just might change your life.

An earlier version of this essay first appeared on.

Rachel Meyer is a Boston-based writer and yoga teacher. Her work has appeared in Yoga Journal, The Washington... Read more