An active yoga practice can certainly build strength. But it may also challenge some muscles without equally challenging their opposing muscles, or antagonists, leaving many yogis feeling muscularly unbalanced.

Bill Reif, a physical therapist, yogi, and author of The Back Pain Secret: The Real Cause of Women’s Back Pain and How to Treat It, notes that yoga tones the majority of our muscles to at least some degree: “Seasoned yogis often have excellent balance, strong core muscles, and a strong quadratus lumborum [a large muscle in the lower back] and quadriceps.”

However, even a well-rounded yoga practice may neglect some movements while favoring others. An imbalance in strength between agonists and antagonists can cause trouble, according to Reif, who says, “To protect the joints from injury, every agonist contraction must be met with an opposing deceleration by the antagonist muscle.” In effect, each time we ask one muscle to contract, we need the opposing muscle to slow and control that contraction. An antagonist that is much weaker than the agonist, for example, can result in a dysfunctional movement pattern.

Even yogis with a vigorous vinyasa practice may lack strength in certain areas of the arms and shoulders. “Poses like and plank strengthen the pectorals, triceps, and serratus anterior,” Reif says, “but do less for the biceps, rhomboids, and posterior deltoids.” As Jenni Rawlings mentions in this article, yoga is long on poses that require “pushing,” and short on those that require “pulling”—thus creating the potential for muscular imbalances in the shoulders.

Reif also mentions that because yoga relies on body weight alone, shoulder stabilizers (like the upper trapezius, supraspinatus, and deltoids) can be strengthened somewhat by poses like downward facing dog, upward facing dog, and cobra, but may not be challenged enough to build muscle mass.

The legs of many yogis may show imbalances in strength as well. “In yoga, many poses, like the warrior poses, lunges, and squats, challenge the quadriceps more than they do the hamstrings,” Reif says. While the hamstrings work in yoga poses such as bridge, reverse tabletop, and locust, they are seldom called on to contract to their max: The knees don’t flex against resistance when bringing the heels all the way to the buttocks, as they would if you were using a hamstring curl machine at the gym.

Yogis’ ankles and wrists may also have imbalances. Reif notes that in the poses of the vinyasa (and others like tabletop), the wrists bear weight while in extension, while yoga does little to strengthen the muscles that move the wrists and fingers into flexion. And, while the feet are often pointed or “flointed” in poses ranging from cobra to headstand, and flointed against the resistance of the body’s weight when pedaling the feet in downward facing dog, or lifting the heels in mountain pose—Reif points out that in yoga there is an absence of resisted dorsiflexion (reaching through the heels and bringing the balls of the feet and the toes toward the hips, like the “toe raises” in the series below).

The solution? “To build strength in these areas and protect joint integrity, yogis might need to incorporate movements in their home practices that aren’t generally done in class, and increase resistance by using weights,” Reif says. The sequence that follows does just that.

Reif recommends the exercises below for boosting strength in the arms and shoulders, the hamstrings, the wrist and finger flexors, and the ankle dorsiflexors—a balanced strength that will help to protect joints.

Embed the following movements in your home yoga practice, alternating them with more traditional yoga poses; or do them as a stand-alone sequence to complement the work you do in group classes. Note that many of the movements suggested for the upper body can be performed in combination with any standing or kneeling pose, and that while double-sided movements are instructed, for variation, you can also alternate between sides.

Why strengthen them: These muscles are used in carrying and lifting.

Come to stand in mountain pose at the front of your mat, dumbbells in hand, palms facing in.

On an exhale, keep your arms at your sides and slowly lift your shoulders toward your ears. On an inhale, release your shoulders. Repeat 10 to 20 times. 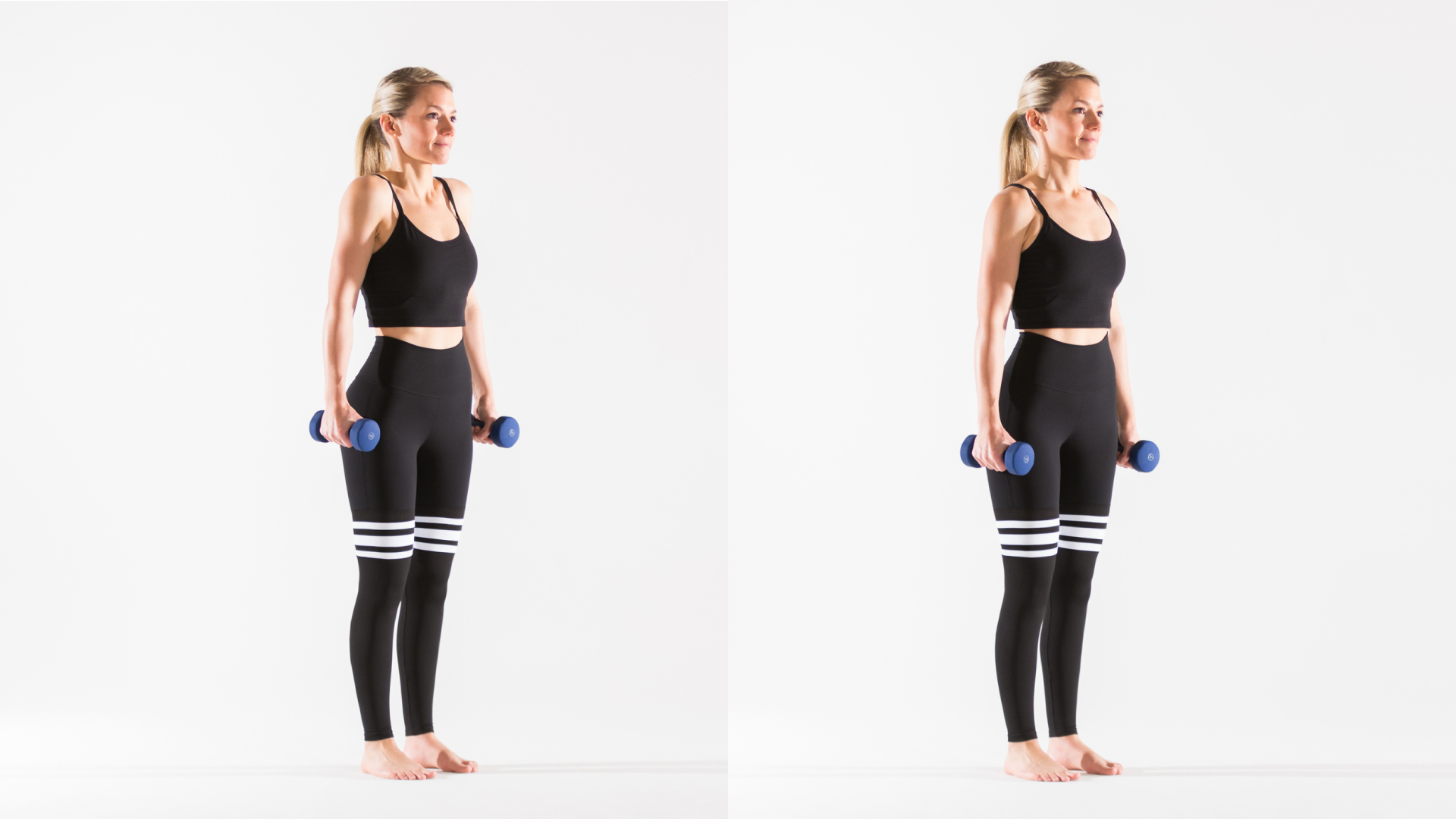 Why strengthen them: These muscles are used in lifting and grasping.

With your dumbbells in each hand stand in mountain pose. Bend your elbows to 90 degrees and snug them against your ribs. Turn your palms to face up and hold the dumbbells loosely. 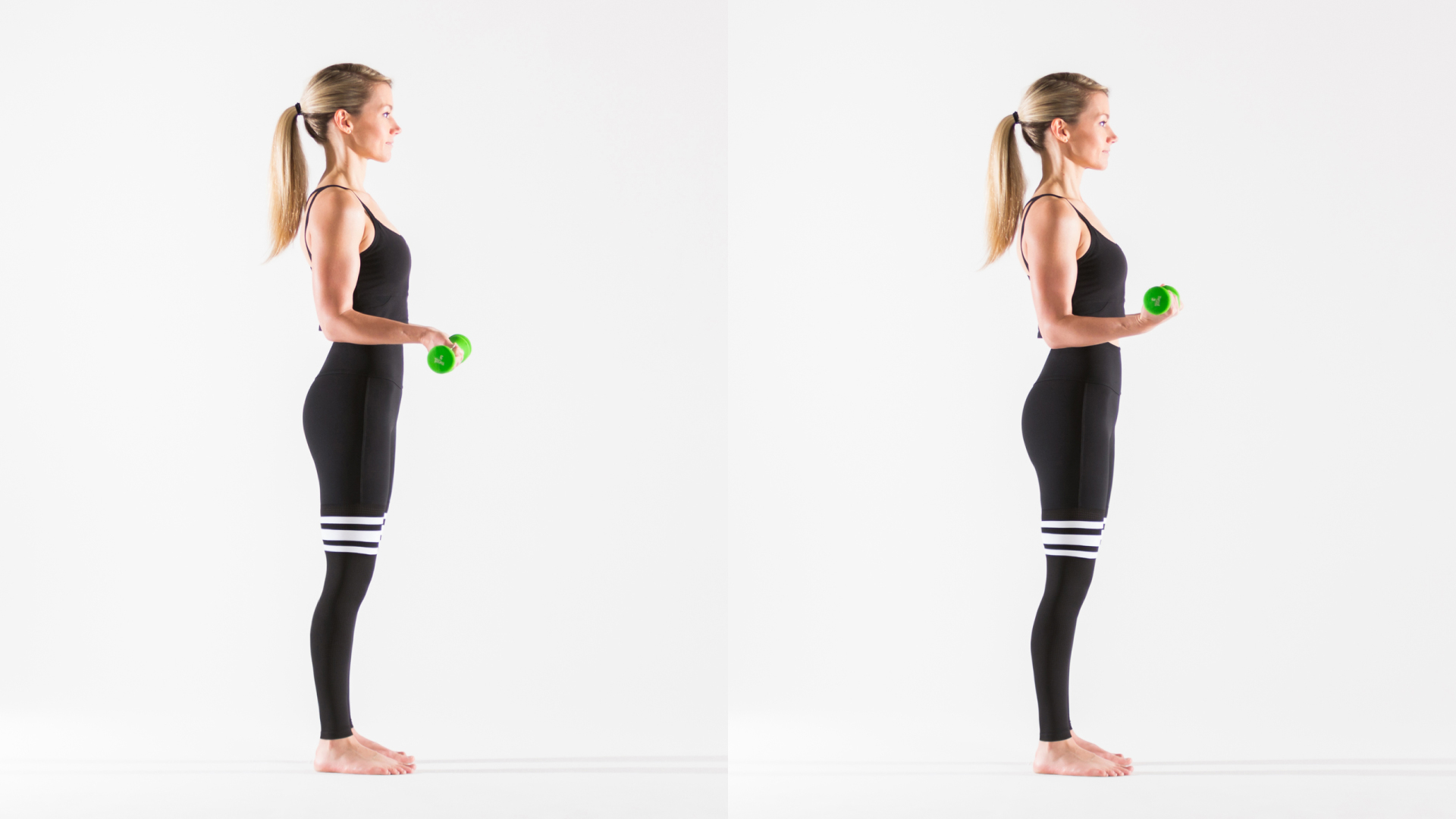 Why strengthen them: These muscles are important in lifting.

In mountain pose, with arms at your sides and palms facing your thighs, hold a dumbbell in each hand. 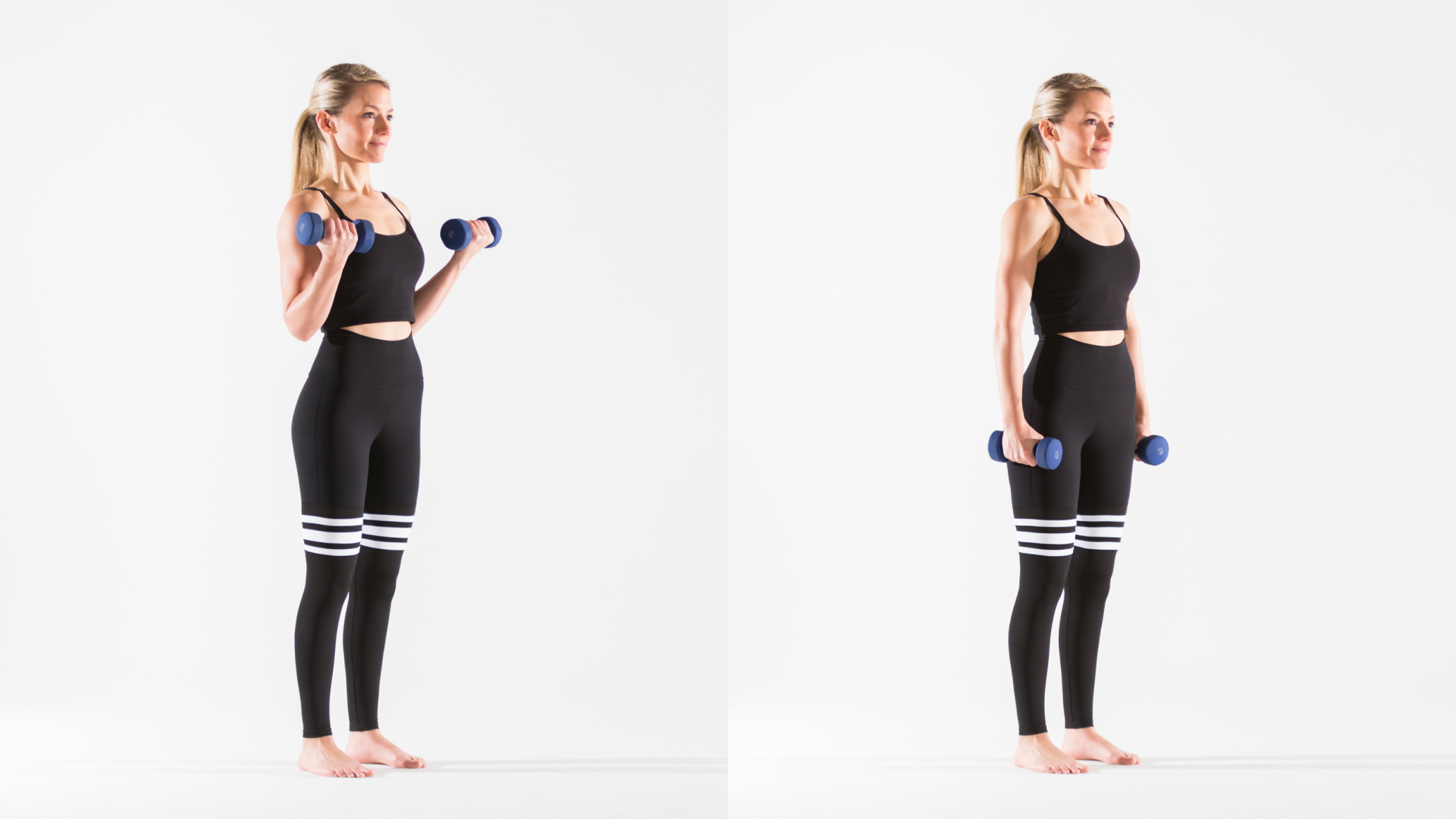 Why strengthen them: These muscles are valuable in overhead lifting.

Stand with your arms alongside you, dumbbells in hands, palms facing each other.

On an exhale, with your palms still facing each other, lift your straight arms as high as you comfortably can in front of you, perhaps bringing them overhead in line with your ears. Inhale, lower your arms back down to your sides. Repeat 10 to 20 times. 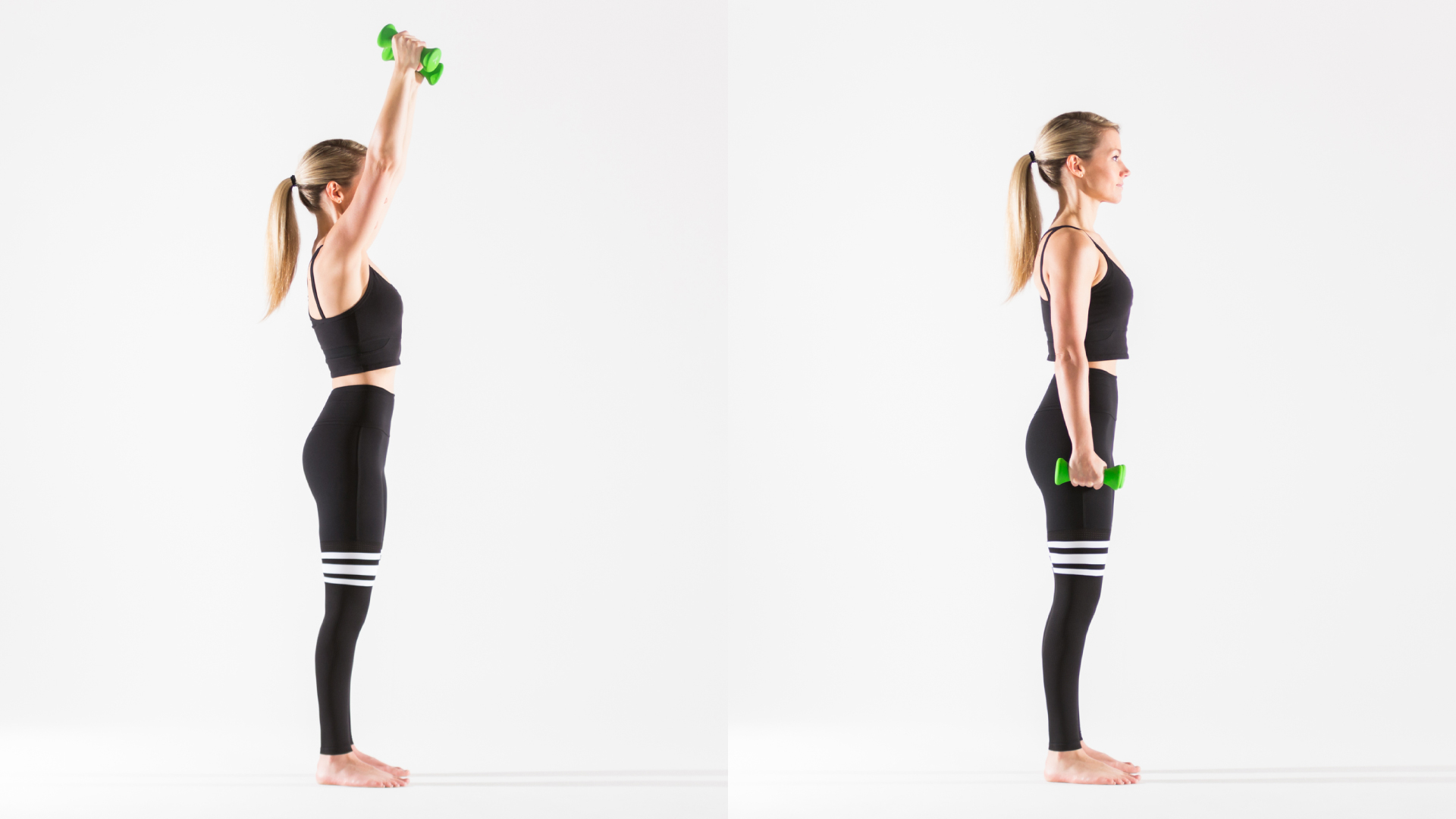 5. Rows from Half Forward Fold

Why strengthen them: These muscles are important for all lifting and pulling activity, and may help maintain a flat upper back in plank.

Once again begin in mountain pose, holding your medium dumbells for this one. Hinge forward from your hips to bring your spine parallel to the earth or slightly higher. Keep a soft bend in your knees and a neutral spine with a gentle inward curve in your lower back; support that curve by drawing your belly in. Allow your arms to hang so that your hands hover just in front of your knees.

On an exhale, keeping your belly drawn in and your upper arms firming in, bend your elbows to pull your dumbbells up toward your navel. Focus on bringing your shoulder blades toward each other (and your elbows close to your rib cage) as you raise your dumbbells. On an inhale, lower your arms with control. Repeat 10 to 20 times. 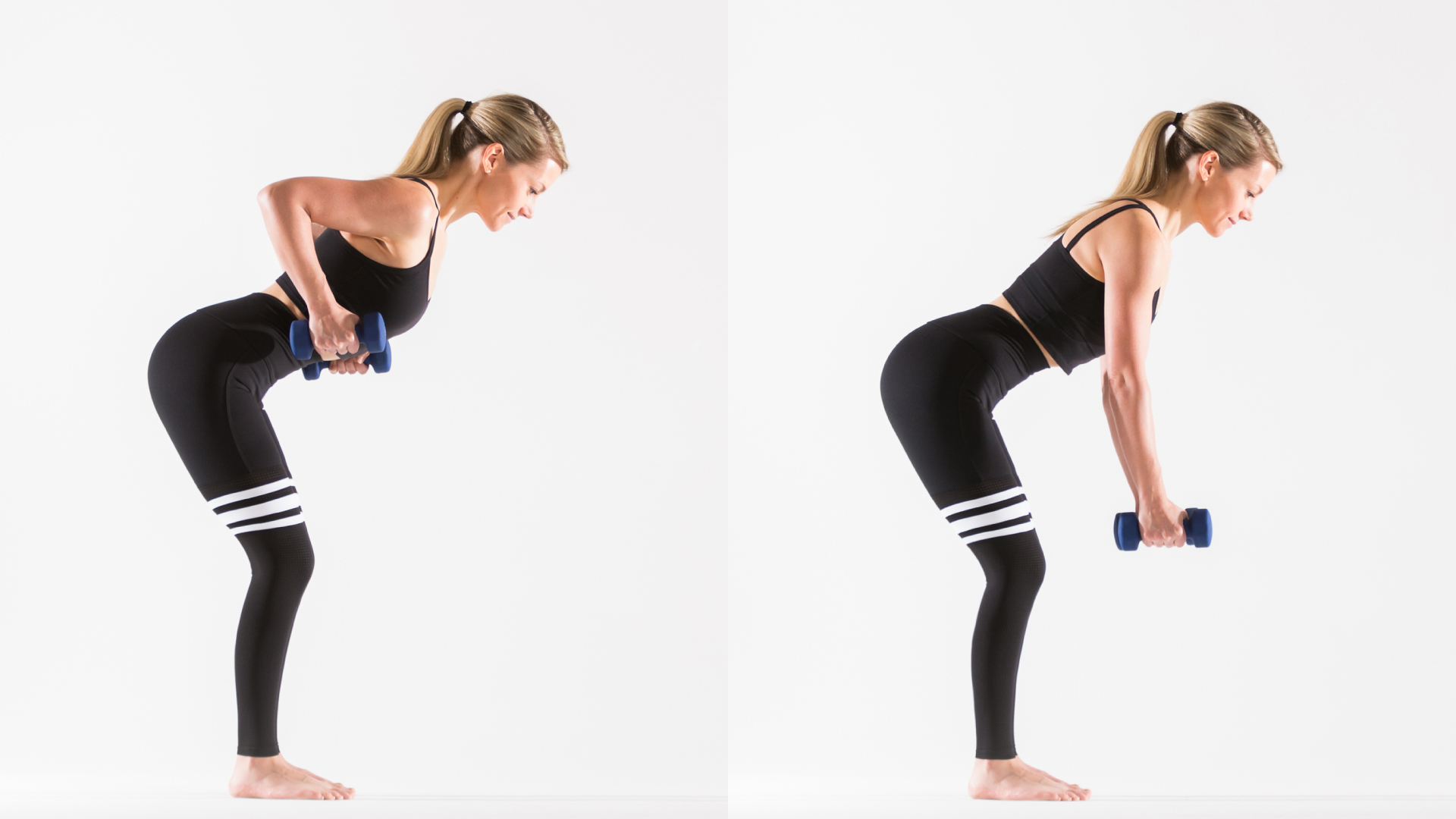 Why strengthen them: All pulling activities require strength in these muscles.

From mountain pose at the front of your mat, dumbbells in hand, step your left foot back a couple of feet, turning it out slightly, and hinge over your straight right leg until your spine is roughly parallel to the earth. Keep a neutral spine with a gentle inward curve of your lower back. Draw your belly in toward your spine. Let your arms hang straight down under your shoulders, palms facing each other, dumbbells held lightly.

On an exhale, slowly raise straight arms out to the sides, palms facing down. Focus on drawing your shoulder blades toward each other. Inhale and slowly lower straight arms until your hands are under your shoulders again. Repeat about 10 times with the right leg forward. Rise to standing. Step your left leg forward, and switch sides. 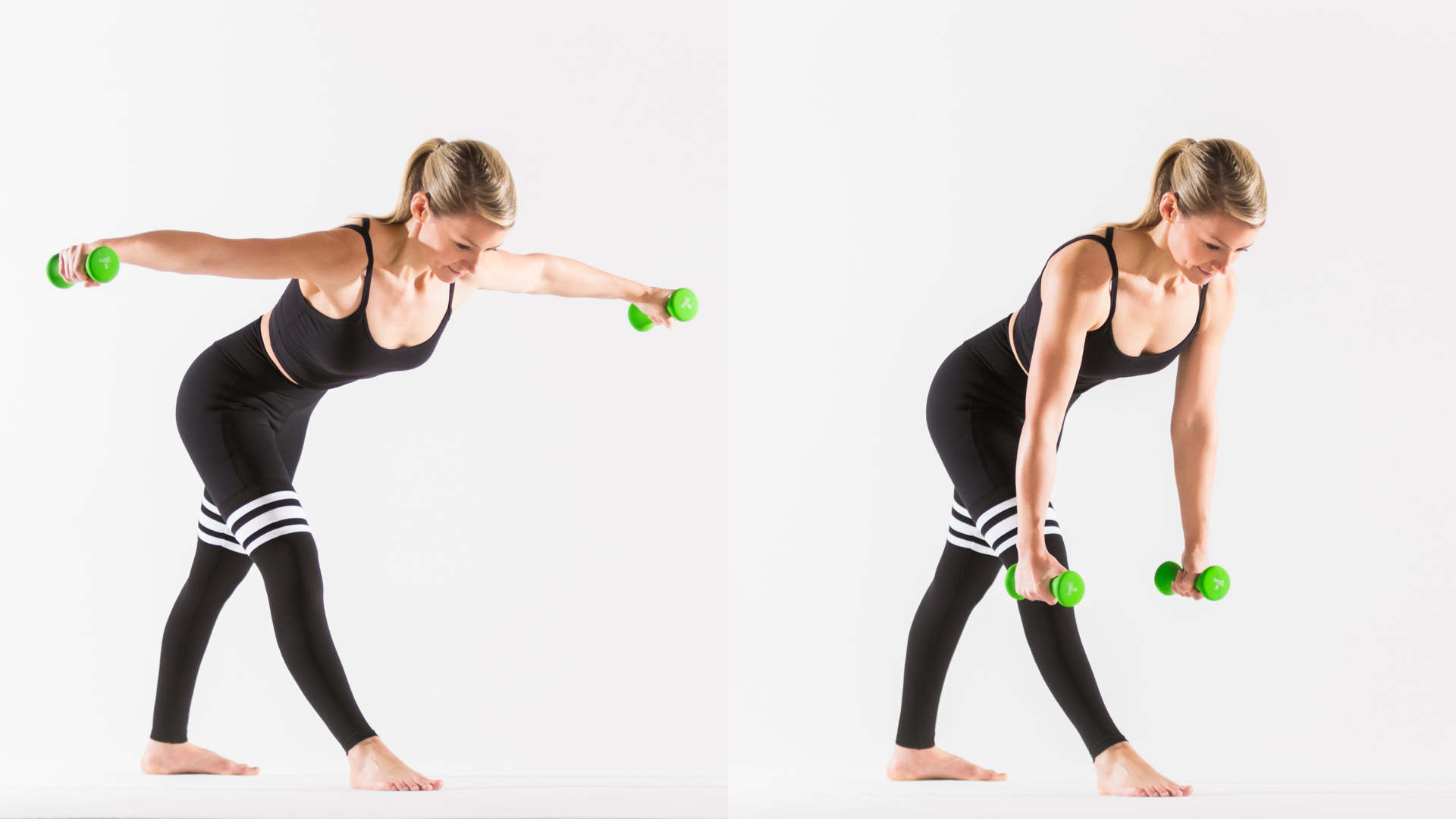 Why strengthen them: Strength in these muscles yields shoulder stability, which is important in lifting, pushing, and pulling.

Come to a kneeling position as if preparing for camel pose, holding your dumbbells in each hand. With arms snug against your rib cage, bend your elbows to 90 degrees, palms facing each other. Maintain that bend in your elbows throughout the following movements. 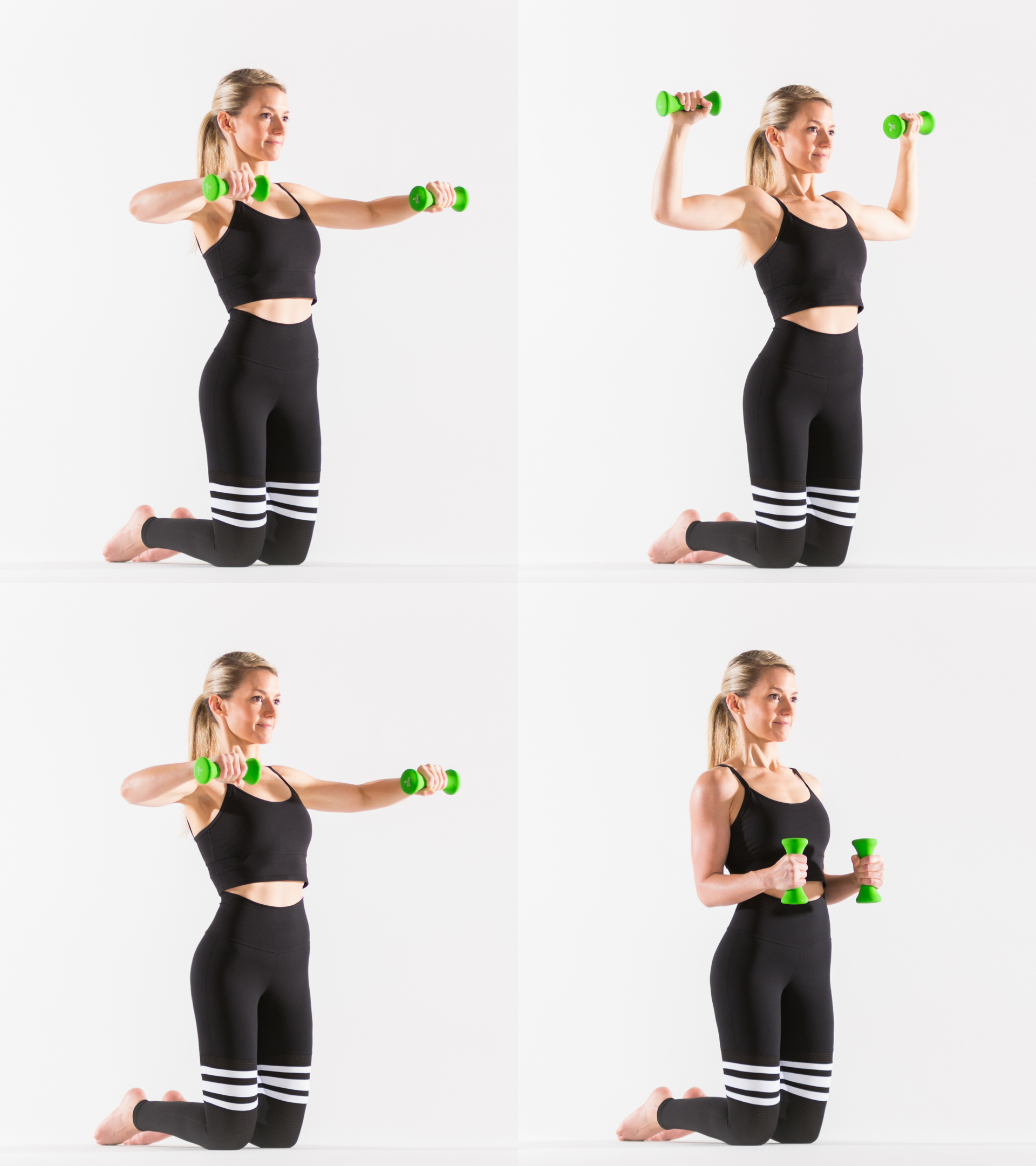 Why strengthen them: Underdeveloped gluteals and hamstrings can cause the pelvis to tilt forward, which can cause lower back pain. Weak hamstrings relative to strong quadriceps may result in knee strain.

Note: To add resistance to this movement, you can use a resistance band. Secure it near the ground (around a bar or beam). Lie on your stomach, facing away from the band, and loop it around your ankles. The band should be just taut enough that it creates a challenge for you to draw your feet toward your buttocks.

Lying on your stomach, place your hands under your forehead and reach your toes straight back behind you, feet parallel. On an exhale, while drawing your belly in toward your spine, slowly bend your knees to bring your heels toward your buttocks, as you effort against the resistance of the band. On an inhale, slowly lower your legs. Repeat 10 to 20 times. 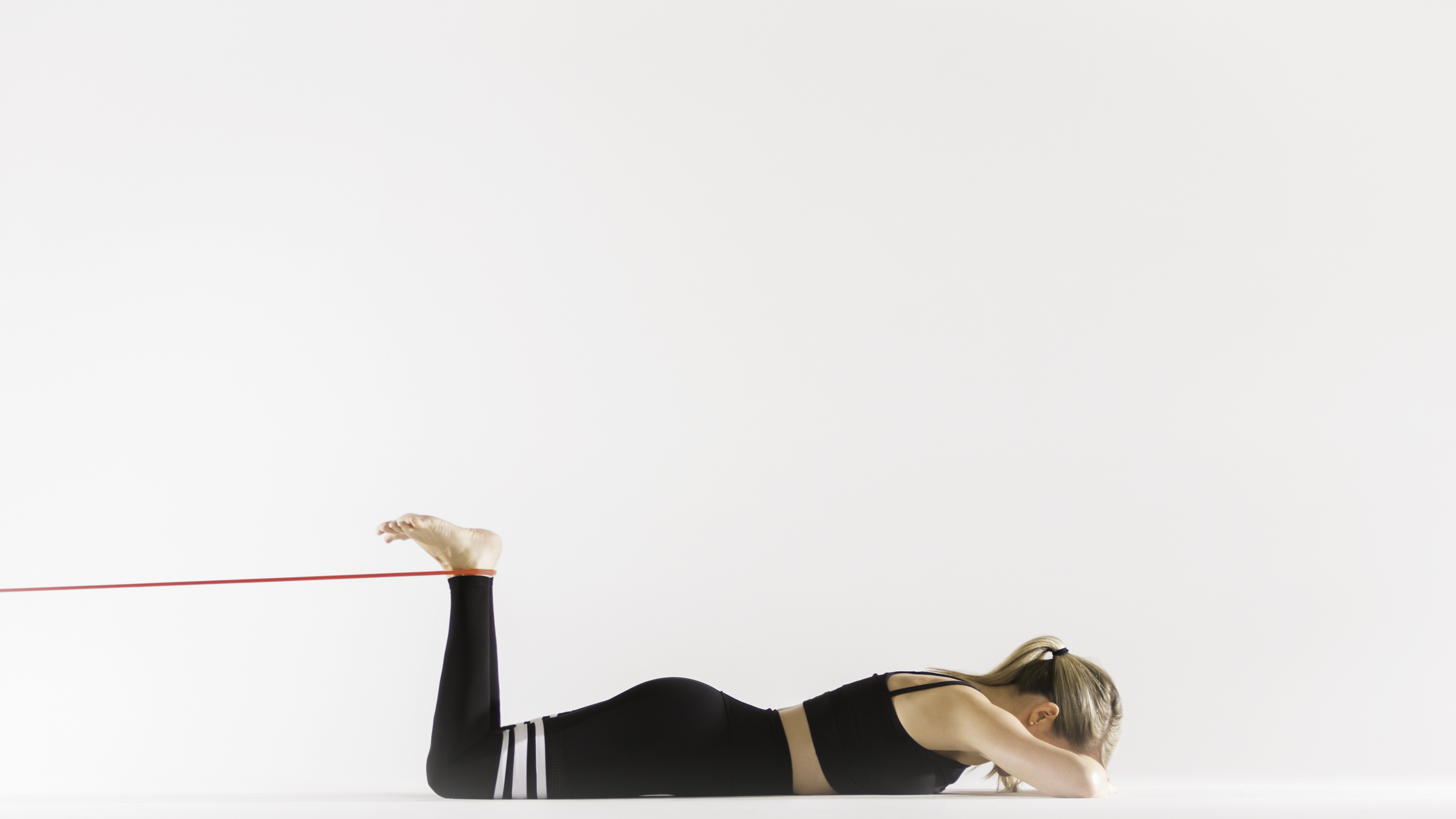 Why strengthen them: Strength in these muscles counterbalances the strength of the plantar flexors, contributing to joint integrity and helping to prevent ankle sprain.

Sit near the front of a chair. Place a dumbbell vertically between your feet, close to the balls of your feet. Then bring your hands under the seat of the chair, lean back slightly (maintaining a neutral spine, with a gentle inward curve in your lower back) and bring your legs out in front of you on a slight diagonal until your legs are straight and your feet are off the floor, in a neutral position.

On an exhale, dorsiflex your ankles, reaching through your heels and pulling the balls of your feet and your toes toward your hips. On an inhale, slowly bring your feet back to neutral. Repeat 10 to 20 times. 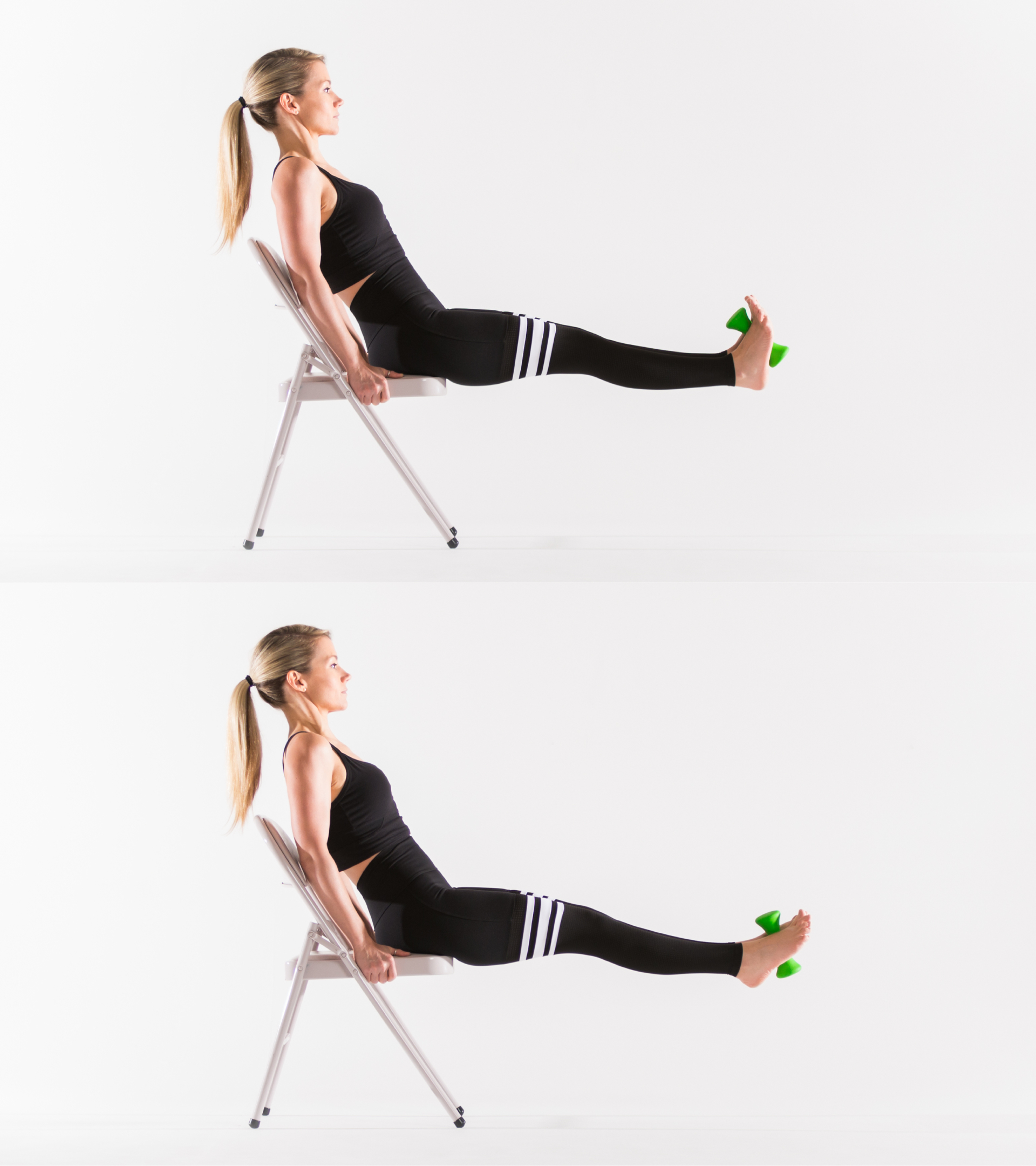 If practicing this as a sequence, after completing the toe raises, sit comfortably in the chair, with feet down and spine long. Practice eagle pose arms on both sides to stretch the muscles between your shoulder blades. Rise briefly to come into a standing forward fold (placing your hands on the chair if you feel any strain when folding deeply) to relieve back tension and stretch your hamstrings.

Then lie down for bridge pose, interlacing your hands and lifting your hips to stretch your shoulders, arms, and chest as well as your hip flexors. Release your buttocks to the floor and windshield wiper your knees from side to side, finally stretching out for savasana—noticing where in your body you now feel a new sense of exertion.