Instagram, Yoga, and Learning to Love My Big Black Body 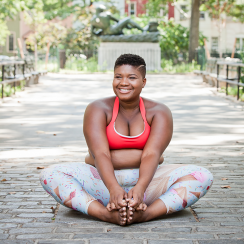 Editors note: the following is an excerpt fromYoga Rising: 30 Empowering Stories from Yoga Renegades for Every Bodyby Melanie Klein.

I was bullied by my elementary and middle school classmates to the point of spending all of eighth grade applying for scholarships to attend a semi-local all-girls boarding school. Leaving to attend Salem Academy seemed like an opportunity for change, and I envisioned a future with fewer asinine young men marring my daily life with their endless searing taunts. And, with the help of large scholarships and financial aid, I was welcomed into a sisterhood of intelligent, driven women who were essentially required to value themselves outside of beauty norms.

If fat black girls couldn’t be found on MTV or VH1, you certainly couldn’t find them in Seventeen magazine. But let’s face it, they weren’t in Jet magazine or on BET (Black Entertainment Television) either. Sure, there were some black bodies on display, but even the fattest among them looked more like Naomi Campbell and Halle Berry than Gabourey Sidibe. There were so few black, female, plus-size role models that I was usually shocked to see someone who looked anything like me on screen or in print. Eventually, the entertainment world started to shed more light on veteran performers like Mo’Nique and Queen Latifah, but aside from those grand queens of comedy and hip-hop, there were precious few fat black women accepted by or represented in Western media.

I think that’s how fat black women learned to laugh at our bodies because our only strong role models were forced to make a career out of laughing at theirs. And I did laugh at my body. I laughed my way from dance performances in elementary school to lead roles in my middle and high school theater programs. I quickly learned that if I could make a joke out of my God-given body, I was one step closer to being accepted by my peers. Turning self-loathing into comedy isn’t a terrible method of living life. People do it every day and some have built impressive careers revolving around self-deprecation.

However, my penchant for making a joke of my own insecurities hit a serious roadblock after college. It was hard enough to joke about my body insecurities since I was already a Weight Watchers dropout three times over and had never been able to maintain a regular gym or eating schedule. But with a host of new insecurities on the horizon, including a crumbling long-term relationship with my high school sweetheart, crippling anxiety over my student loan debt and chosen career path, and an increasing familiarity with the death of loved ones, it became impossible to differentiate my self-loathing from reality.

“But Isn’t Yoga Only for Rich White Girls?”

It probably seems improbable that one of the whitest corners of the fitness world would help change my mental body conversation. We can tap dance around the race, body image, and athletic world crossroads forever, but I’d argue that our inability to accept reality is part of a larger problem. Frankly, the Western yoga world has been heavily fortified by wealthy white America for decades. Up until the late twentieth century, it was extremely uncommon to see a yoga practitioner who wasn’t either a stern but svelte brown-skinned man or an equally stern but svelte white-skinned woman. Before the Internet was part of our daily lives, any other body type besides these two was relatively invisible within the yoga community, and the media has reflected that cultural imbalance. It seems that the Achilles heel of Western yoga is our inability to accept that the eight-limbed path knows no “ideal” practitioner. Yoga transcends specific body types, and the practice should be enjoyed by any and all who encounter it.

However, I didn’t know about any of that when I started regularly attending Bikram yoga classes around the corner from my graduate school about five years ago.

My depression must have been palpable to those around me because one of my grad school classmates encouraged me incessantly to join her in hot yoga classes, which had allowed for considerable emotional clarity in her own life. I wasn’t unfamiliar with the idea of a curvy yoga practitioner. My mother has always been interested in holistic healing, and the books and magazines she left strewn about my childhood home made me familiar with the work of Dianne Bondy and Anna Guest-Jelley. I knew there were definitely plus-size women who were practicing yoga. Usually, the motivation that brings a person to a long-standing yoga practice isn’t based upon visibility of body types, but on a desire to truly look within and deconstruct the soul.

Ultimately, what brought me into Winston-Salem, North Carolina’s Bikram Yoga studio in 2011 was a need to reclaim my dignity from the angrily clenched fists of depression. To dilute that soul reclamation to the influence of a few curvy-bodied practitioners would be off base. Ultimately, I just wanted to stop feeling depressed. When I finally dragged my ass into the studio on Fayette Street, I was shocked to find that a sequence of arduous yoga poses combined with brutally intense breathing exercises was the exact medicine I needed to pull myself out of my life funk.

Ultimately, what brought me into Winston-Salem, North Carolina’s Bikram Yoga studio in 2011 was a need to reclaim my dignity from the angrily clenched fists of depression.

The extreme heat of the yoga studio, topping out around 105 degrees on a regular basis, was the equivalent of a chloroform-soaked rag over the mouth of my self-loathing. Regardless of whatever pathetic quantity of self-doubt and pity I’d brought with me into the studio, it was imperative that I release my baggage in order to make it out of class alive. And when I challenged myself to release my self-doubt and avoid self-pity, I was astounded by the strength my body unleashed. The more I devoted myself to my yoga practice, I saw that my real problems didn’t have anything to do with my body or my life circumstances. I began to realize that my perspective and judgment was clouded by my inability to harness my own strength. I saw that the energy I spent showering myself with negativity was primarily responsible for my unhappiness. Every time I practiced, with sweat dripping from my knee creases and tears welling in my eyes, I reclaimed a sense of self-respect that had been sorely missing from my daily life. For me, it was finally a way I could exercise my body and keep the pressures of twenty-first-century body norms at bay.

My true journey toward self-love didn’t fully kick into gear until I began regularly photographing my home asana practice and posting the evidence on my Instagram account. I began photographing myself because I noticed a growing number of yoga practitioners and teachers posting asana progress photos on Instagram and I wanted to be part of a larger community. In many ways, home yoga practice can be very isolating, and I wanted to feel like I was “part of a team.” In many ways, photographing my body’s gradual transition in yoga poses became a kind of guerilla emotional therapy. I transformed into my own psychiatrist and gave myself the necessary time and space to confront my internal demons. By photographing my body and being forced to stare at it on a daily basis, I had a literal constant confrontation with the parts of myself that previously seemed unforgivable. For example, if I photograph myself in the heat of a challenging side plank variation and the image is dominated by my gelatinous fat spilling over the waistband of my leggings, I’m faced with two options: throw shade at my body for not being slender, OR give myself a high five because “DAMN, MA! THAT SHOULDER-STRENGTHENING GAME IS ON POINT!”

That’s the difference. I steadily began complimenting myself for the physical strength and flexibility exhibited by my body instead of denigrating it for not resembling pictures in magazines. When I started doling out high fives instead of going on “shade parades,” I saw that I had a lot to be thankful for in my own body. My meaty thighs, once cast into shameful darkness because of their width and girth, proved to be secret weapons in my balance and standing posture practice. My chubby belly, once a constant source of embarrassment, began to give me a sense of pride because I was amazed by my ability to engage the surprisingly strong core muscles underneath. It seemed like a waste of time to hate these aspects of myself, when they were obviously key contributors to my overall strength and self-confidence.

For me, it doesn’t matter if the superficial Western yoga world ever truly accepts and promotes the curvy black female body. After all, it’s not as though any other aspect of our whitewashed society has openly accepted fat black women en masse. My only concern is making sure that my fat black sisters understand that yoga is for them, regardless of what society wants them to think.

Jessamyn Stanley is an internationally acclaimed voice in wellness, highly sought after for her insights... Read more