A Sitting Pose for Lotus-Challenged Yogis 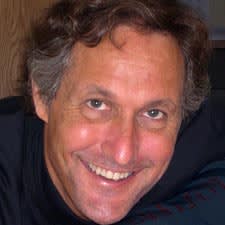 Are you one of those who can sit for hours in padmasana (lotus pose), declaring it not only stable but wonderfully comfortable? If so, count yourself among the chosen few. For those who can get into it with ease, padmasana provides the ideal foundation for pranayama and deep meditation. It keeps the practitioner perfectly upright, motionless, alert, and free from fidgety distractions for long periods of time.

But for the lotus-challenged majority, a litany of physical limitations—tight hip muscles, thick-necked thighbones, and unfavorably oriented hip sockets, to name just a few—makes padmasana a painful and unattainable yoga posture. So most practitioners settle for less challenging seated postures like sukhasana (easy pose) or siddhasana (adept’s pose or accomplished pose). Unfortunately, these poses, while quite pleasant, do not offer much stability.

Think of supported svastikasana as the lotus pose for the 99 percent - padmasana for the masses.

As an alternative, B.K.S. Iyengar carefully crafted a special supported version of the traditional cross-legged posture known as svastikasana (well-being pose). It strikes a beautiful balance between padmasana-like stability and sukhasana-like ease and allows the vast majority of practitioners to experience at least a taste of the calm ecstasy enjoyed by the lotus-loving minority. Think of supported svastikasana as the lotus pose for the 99 percent—padmasana for the masses. 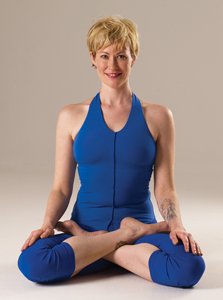 To fully appreciate what a profound gift this rather unassuming alternative posture offers to the flexibly impaired, let’s consider what makes padmasana work and then explore how a supported well-being pose re-creates some of those essential properties.

In the Yoga Sutra (2.46), Patanjali defined asana with just three words: sthira sukham asanam. Sthira means “stable, calm, motionless”; sukham means “comfortably, easily, agreeably, pleasantly”; asanam means “is a yogic posture” or “is a sitting posture.” So one way to translate this sutra is: “A comfortably stable posture is a yogic posture.”

Patanjali didn’t name any specific asanas, but a few hundred years later Vyasa made a famous commentary on this sutra in which he listed 13 asanas and implied that many more existed, most of which appeared to be seated poses.

The top honors went to padmasana, and svastikasana came in fourth on Vyasa’s list. A later commentator (Vacaspati Misra) identified svastikasana as a seated pose in which the shins cross. Using these venerable texts, plus a bit of anatomy, we can infer why padmasana held favorite-pose status through the ages, and why supported svastikasana is such a worthy substitute.

When it comes to creating steadiness (sthira), padmasana is in a class by itself. It positions the thighs so that much of their outer surface rests on the floor, and then interlocks the legs to hold them in place, creating a broad, unwavering foundation. But anatomically speaking, a lot has to happen to create that foundation.

In order for the feet to rest high on the opposite thighs (one of the hallmarks of a good padmasana), without damaging the knees, the thighs must rotate outward about 115 degrees in the hip sockets. Also, the knees must move much closer together in front than they would in sukhasana or siddhasana. The thigh rotation moves the greater trochanters—the knobby protuberances on the upper outer thighbones—downward so far that they press against the floor in much the same way that the sitting bones do. The movement of the knees toward one another then moves the trochanters forward of the sitting bones. So now, instead of having just two points of contact with the floor—the two sitting bones—the pelvic region rests on four solid points of contact (the two sitting bones plus the two greater trochanters) arranged in a sort of rectangle, like the four legs of a broad table. This creates a formidable base of support directly under the pelvis.

Padmasana’s sthira-promoting features don’t stop here. The way it locks the pelvis into a vertical position—by pulling on the gluteus medius muscles—provides another major source of its stability. As the trochanters rotate downward in padmasana, they pull the gluteus medius muscles taut (you can feel this by pressing your fingers into the outer sides of your pelvis below the pelvic rim). As the trochanters move forward, they pull the gluteus medius fibers even tighter, and some of these pull the upper pelvis forward. Meanwhile, other fibers pull the pelvic rim straight down, while still others pull it backward, so the net result is that the taut gluteus medius muscles hold the pelvis very firmly in a healthy vertical position. The unwavering, upright pelvis, resting squarely on the broad foundation of the sitting bones, greater trochanters, and outer thighs, vertically aligns and stabilizes the entire spine, which in turn stabilizes the head.

We’ve established that padmasana is extraordinarily good at creating steadiness (sthira), but what about ease (sukha)? Many of the characteristics just described make the pose exceptionally easy to stay in once you’re in it. But tightness in the gluteus medius muscles and other soft tissues, or simply the wrong shape and orientation of the hip sockets and thighbones (femurs), may prevent you from experiencing any sense of comfort and could make getting into the pose nearly impossible. In any event, forcing yourself into the pose can easily damage your knees. Most people need the well-being of supported svastikasana.

The Pursuit of Well-Being

The stability, ease, comfort, and precise upright position of supported svastikasana make it an exceptionally good meditation pose, even for beginners.

In B.K.S. Iyengar’s version of supported svastikasana, you sit on a stack of blankets with your back against a wall and your legs supported by a rolled blanket. The genius of the pose lies in its exact configuration, which combines the most important physical characteristics of padmasana with those of sukhasana to create stability and comfort exactly where you need it.

Supported svastikasana has tremendous sthira. It mimics each of the stabilizing elements of padmasana, although it expresses them to a lesser degree. The thighs are oriented parallel to the floor and their outer surfaces partially rest on the support blankets. The combination of the feet on the floor and the rolled blanket under the knees keeps the legs in place, mimicking the interlocked leg position of padmasana. The thighs rotate outward, not nearly as far as in padmasana but far enough to bring the greater trochanters down to act as bony supports that supplement the sitting bones. The feet and knees move well across toward the opposite side of the body (more than in sukhasana), and this draws the trochanters forward of the sitting bones, where they act as the second two “table legs” to broadly support the pelvis. The downward movement of the greater trochanters as the thighs rotate out pulls the gluteus medius muscles taut—especially if these muscles are tight to begin with—so they hold the pelvis firmly in place with minimal effort.

By keeping the sacrum and upper back in contact with the wall, supported svastikasana prevents the pelvis from rocking backward, stops the spine from slumping, helps hold the body very still, and provides tactile feedback and physical constraint to reinforce the precisely vertical posture.

For the average practitioner, this pose is much more accessible and pleasant (sukha) than padmasana for several reasons. Even unsupported svastikasana requires considerably less rotation of the thighs than padmasana does, and supporting the pelvis on a high stack of blankets reduces that rotation even more, so many people with tight gluteus medius muscles can get into the pose without pain and risk of injury.

The overall stability, ease, comfort, and precise upright position of supported svastikasana make it an exceptionally good meditation pose, even for beginners. 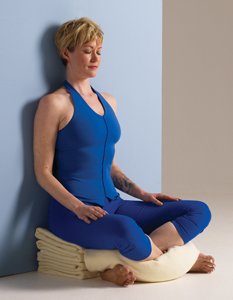 To practice supported svastikasana, you’ll need access to a wall with either a carpet or a folded sticky mat out in front of it and four yoga blankets. Fold each of the open blankets in half, twice. Roll one of them into a long roll and set it down nearby. Fold the other three in half, twice more, the last fold being lengthwise. Stack these three parallel to and firmly against the wall.

Sit on the stacked blankets with your sacrum touching the wall. Cross your legs, bringing the right leg in first (alternate the first leg in each time you practice the pose). Cross far enough that the shins make contact with one another at mid-shin or a little below, and each foot rests on the floor under the opposite thigh or partly emerges beyond the outer thigh. Adjust the height of the right knee until the right thighbone is exactly parallel to the floor. This may require moving the left foot slightly forward. If you cannot lower the right knee enough, raise the height of the stack of sitting blankets until you can.

Now lift the left knee until it is at the same height as the right one. Place the rolled blanket atop both feet and adjust it to support the legs in this position. Fine-tune until both thighs are parallel to the floor and the left and right sitting bones bear equal weight.

Lean forward and place both hands on the floor in front of you, deliberately tilting the top of the pelvis forward. Lift the pelvis completely off the blankets, press the tailbone firmly against the wall, and slide the pelvis back down onto the blankets. Now sit upright again, retaining some of the forward tilt of the pelvis, and rest your hands on your thighs. The lower end of the sacrum just above the tailbone should press firmly against the wall. The upper back should touch the wall at or just below the shoulder blades. The curve of the lower spine away from the wall will be exaggerated at this point, but it will release back to neutral at the end. Exhale freely. Then, while inhaling, press the backs of the arms, the upper outer corners of the shoulders, and the back of the head into the wall. As you do this, lift the front and sides of the chest up and forward, roll the tops of the shoulders backward, slide the backs of the shoulders down the wall and the back of the head up the wall.

As soon as you complete the inhalation, exhale freely by relaxing the lower abdomen, lower rib cage, and diaphragm muscle. At the same time, settle into the final pose by relaxing the upper thighs and hips, allowing the pelvis to tilt back to neutral. Relax the arms so they move naturally off the wall and their weight draws the outer shoulders down and slightly away from the wall, and relax the upper back and neck so the head comes off the wall very slightly. The chest should remain lifted and the upper outer shoulder blades pulled back subtly. Look downward briefly at the tip of your nose without bowing your head; then, keeping the eyes at this downward angle, either gaze at a spot on the floor in front of you or softly close your eyes.

A Platform for Your Mind

Once you are seated upright, steady, and comfortable in supported svastikasana, you have tremendous freedom to explore the life of the mind. The beauty of this pose is that it creates and sustains a wide-open mental space in which you can realize truth in whatever way you choose.

If you tend to slump forward in seated postures, you’ll need to work to keep the shoulders from rounding, the chest from dropping, and the head from coming too far forward. To correct slumpasana, practice any supported backbends, such as viparita dandasana (inverted staff pose) over a block (with your legs in svastikasana position) before moving on to well-being pose.