A Wake-Up Call for Over-Represented Yogis 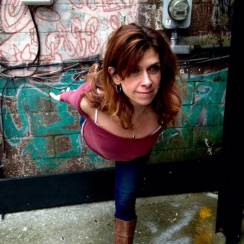 Take several deep breaths. Do your best to identify and then let go of any thoughts that are preoccupying you.

Read the question below and then close your eyes for a moment.

Whose image do you see when you hear the words ?

I’ve tried this exercise with quite a few yoga lovers and initially, we all saw in our mind’s eye the same person: a thin, young, white female doing something inaccessible for the vast majority of people who practice yoga—including experienced, able-bodied practitioners. And while those I asked varied in age, race, experience, size, gender, and physical mobility, all of us envisioned a skinny white woman.

If yoga, which originated in India, is practiced today by hundreds of millions of humans, why is it that it is now predominantly represented by skinny white women?

We all visualized the same yogi because that specific image has essentially been all we’ve seen for the fifty-odd years that yoga has been popular in Western culture. (It was right around the middle of the twentieth century when yoga really took off in Western countries.) Although yoga’s popularity has grown rather rapidly—it’s now estimated that 300 million people practice yoga worldwide, with 36 million in the United States alone—a Google search for “yoga practitioner” will yield a page of images dominated by thin white women.

If yoga, which originated in India, is practiced today by hundreds of millions of humans, why is it that it is now predominantly represented by skinny white women?

It’s time for to stop being tolerant of the lack of diversity in contemporary yoga.

There are many vocal advocates for diversity in Western yoga who are finally beginning to be heard. Dianne Bondy, Jessamyn Stanley, and Jivana Heyman are all teachers (just to name a few) who have made it their mission to advocate for inclusivity in yoga. But we still have a long way to go. Until we see every body type, skin hue, gender, sexual orientation, and all varieties of ability represented equally in advertisements and media publications, we must remain committed and vigilant. At the moment, we still do a double take when a model on the cover of a yoga magazine is a person of color or larger than a size 6.

This extreme lack of diversity is also reflected in the vast number of public classes in which those who don’t meet certain rigid criteria can feel excluded, unwelcome, and underrepresented. And, as a result, many don’t come back. Isn’t the point of yoga to offer healing, unity, and community?

If we’re earnestly practicing all eight limbs of the yoga path, we must recognize our part in enabling the overrepresentation of the thin white yogi and turn our attention to supporting everyone who loves and practices yoga. The first step is for those of us who are overrepresented to confront some uncomfortable truths about ourselves, including where and how we’ve been oblivious to our own privilege and entitlement. That’s where we begin. Taking action is the next immediate step.

It’s imperative that those of us who resemble the overrepresented speak up and take action.

When we see ourselves represented, it validates that we belong. When the many who aren’t represented and have to fight to be seen, heard, and recognized are represented, it’s a bittersweet victory, because it never should have been a struggle in the first place. In a just world, articles like this one wouldn’t be necessary.

But in this world, when we see wrongdoing, we have choices. Advocate or ignore. Condoning exclusion by not speaking up or by being passive in any other way is an act of exclusion, too. We need to be willing to condemn the old ways because they are harmful to others. Not slowly or incrementally. Right now. So how do we do that?

If those of us who are overrepresented consistently take a few important actions to advocate for diversity in the world of yoga, a shift can occur. Here are a few ideas about how to begin today.

1. Be actionably mindful of the companies, teachers, and people you support.

What publications do you subscribe to? Whose classes do you take? Do the other students in the classes you attend look and move as you do, or is there a strong representation of diversity? If you teach, who do you ask to sub your classes? From what companies do you purchase your yoga accoutrements? Whose books do you buy and why? From whom do you purchase your insurance? It all matters. With every choice we make, we further our values.

We vote with our dollars and demonstrate appreciation of—and actively support—the things and people we value. We do this through choices such as the ones above. If we aren’t including diversity as a criterion by which we make everyday decisions, we are contributing to the problem of underrepresentation. If your favorite yoga brand only depicts thin, white, conventionally attractive, cis women doing over-the-top postures, you can stop purchasing from them. It really is that easy.

Yoga teachers have a platform where they can set an example and use their language to strategize for change. Word choice matters in everything—from how we meet and greet new students, to the sequencing we offer, to the verbal cueing we use to acknowledge bodies of different shapes and sizes, to the music we play in class. (Music lovers identify strongly with lyrics. Musicians represent every background and value system—who we decide to showcase in class reflects our values too.)

It’s vital to use gender nonspecific language, thereby demonstrating respect in all of our word choices. If you care about people feeling seen and acknowledged, thoughtfully consider the words you choose. For example, instead of describing a modification for “pregnant women,” you can say “pregnant students” or “pregnant people.” Using “person” or “people” in place of gender pronouns is a simple and easy adjustment to our vocabularies that shows respect for all and avoids unintended discomfort.

3. Check in with your ideals and beliefs.

Consulting the eight limbs of the yoga path—specifically the yamas and niyamas—helps us better understand the lens from which we view our values and our actions. Examining our biases and privileges helps us to expand the range of what we believe to be true and to make necessary changes.

If ahimsa (non-harming) is something you value, apply it to every choice you make. It’s hurtful and damaging when we don’t operate with awareness and consideration for all yoga practitioners, period.

4. Show no tolerance for intolerance.

A willingness to rebuke speech or actions that are offensive, intolerant, or biased toward one group of people is the only justifiable stance to take. Don’t be silent. Silence can and should be interpreted as condoning derogatory words and actions.

Necessary confrontation can be done with compassion by asking compelling questions to understand the viewpoint of another person. Offering that person insight and a different point of view in return gives them concepts and facts that may help them reconsider their beliefs.

Even if you don’t succeed in changing someone’s mind, you’ve planted a seed and spoken up for what you know to be right. Making it clear that you hold no space for judgments that apply to skin color, ability, gender, sexual orientation, or size is a compelling stance that others can learn from and adopt if they’re willing.

If you have trouble with confrontation, don’t use that to let yourself off the hook. In the past, I didn’t speak up, and I often witnessed others’ silence. Previously making the choice to ignore or tolerate this type of thinking and behavior is the main reason I felt compelled to write this article.

Have you ever recognized, when you really gave it some thought, that your own actions or words were harming others? I’ve talked with too many people who’ve indicated that they felt unwanted or unsafe in a studio environment. And I did nothing in response other than to offer some weak excuse or ineffectual apology. I deeply regret those choices.

Once we recognize that by doing nothing we are harming others, we can’t ignore this problem.

5. Evaluate how you define advocacy.

Those who experience marginalization daily do not need the invitation, permission, or stamp of approval from individuals who have not had to fight for representation. Believing they do is a sign of a superior mindset. Sit with your beliefs before you act. Don’t run away from truths that feel too uncomfortable to unpack. Fully examine all of the moments you can remember when you witnessed or caused harm. Lay all of your ideas out in the open, where the bright light of truth can shine its spotlight. If you can identify ways in which you’ve contributed to a realm that courts and supports only those who look, move, and love a certain way, then it’s time to make meaningful changes in your thoughts and behavior.

That’s how you advocate.

Once we recognize that by doing nothing we are harming others, we can’t ignore this problem. My wake-up call came from taking a long look at my student population and finally understanding that seeing primarily very able, thin, white bodies in my classes meant that I was creating an atmosphere of exclusivity and sameness. Since I’m not a marginalized person, I have the luxury of not having to do anything about it. I thought I cared, but once I took a magnifying glass to my own privilege, it was obvious I’d barely done anything to change the status quo. This is how I realized I was very much a part of the problem and oblivious to the depth of my privilege.

Don’t let feelings of shame get in the way of change. If you truly want to be an activist and advocate, take yourself on.

Lara Falberg has been teaching yoga since 2006. Trained in Atlanta, Georgia, she now lives in Columbus,... Read more