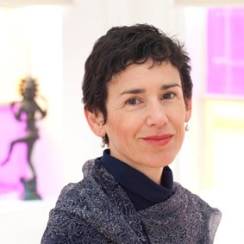 This balance between liberating flow and containing flow has its counterpart in the body. The practice of hatha yoga begins with a slow unbinding of tension, blocks, and holding patterns that may be limiting our physical and psychological choices. And if our practice is sound we inevitably find ourselves feeling more and more fluid. But often this growing state of fluidity goes too far and we move to the other end of the continuum: instability. While it is essential to open up the channels throughout the body to allow for a clear flow of energy, it’s equally essential to be able to contain and direct our energies in a purposeful way. Both processes are necessary—the first to access prana (or life-force), the second to direct that prana in a way that is life-enhancing.

The practice of hatha yoga begins with a slow unbinding of tension, blocks, and holding patterns that may be limiting our physical and psychological choices.

Most practitioners have a predilection for working on one end or the other of this flexibility/stability continuum. It is human nature to prefer practicing what we can already do well. Thus, the student who needs to work on strength and cohesion is usually the one spending her time lounging around with her feet behind her head, while the student with rippling muscles may insist that 108 sun salutations per day are just his ticket! Noticing your own tendencies can be helpful in bringing greater balance to your own practice.

The sequence of postures in this column builds both strength and stamina, but ease in the practice comes only through flexibility, when there is a clear guiding of force through the bones into and across the joints. The ligaments, which connect bone to bone across the joint spaces, must be both strong and supple, for they are primarily responsible for defining the optimal positioning and angle of the bones as they meet at each joint. The ligaments are also responsible for maintaining the space within each joint. Working the joints correctly maintains the integrity of the ligamental tissue, but when we sit into a joint and lean against the ligaments they overstretch and their role as caretakers of the joints is compromised.

Imagine each joint in your body as a “floating space,” and each of these floating spaces as dots. Just as a child connects numbered dots to gradually reveal a picture, when you connect from one floating space to another in an asana you build a form that creates a posture. And as you learn the boundaries of each joint’s natural range of motion, you can become more and more precise in tracking the movement of the joint within those boundaries.

Working within the narrow corridor of a joint’s optimal function will help you both to avoid injury and to move more efficiently. When supporting the body weight through the arm, for instance, one has to learn to direct the force through the center of the shoulder joint rather than to the front, to the back, or to one side of the joint. When force is directed in an off-center or uneven manner, this requires some muscles to work overtime, while others go on holiday. This uneven use of the muscles causes them to fatigue prematurely.

The following arm balance sequence is designed to be inserted into the sun salutation (surya namaskara) after the first lunge, but it can also be practiced independently. In either case, practice this sequence when you are already warm and flexible, once or twice on each side. It builds heat, strength, and endurance. If you are inserting the sequence into the sun salutation, follow it with postures such as standing forward bends to release the shoulders (parshvottanasana and prasarita padottanasana) and the wrists (uttanasana and pada hastasana).

Begin by taking the right leg back into a lunge. 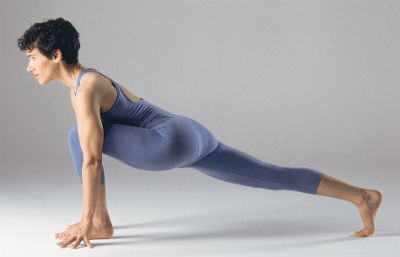 Turn onto the outside of your right foot while simultaneously placing your right hand directly underneath your shoulder in line with the arch of the right foot. In the sun sage pose, think of your arm as the front “leg” of the standing posture—the alignment is exactly the same. Now bring the left leg on top of the right with the inner edges of both feet touching and the feet firmly flexed. At the same time pivot the whole body onto the right side so you are now supported on the right arm and leg. Extend the left arm strongly upward. 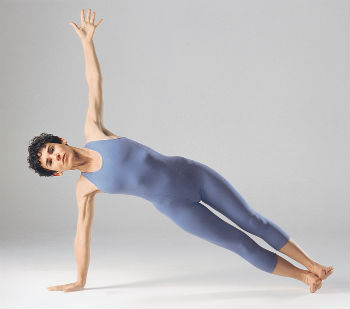 Quickly check to see that your shoulder joint is directly over the supporting arm (this will give you the optimal carrying angle to support your body weight). If the arm is placed beyond the center of the shoulder, it will be difficult to balance, and your shoulder and elbow joint will be vulnerable to strain.

Imagine how unstable a table would be if the legs were angled out from the table top and you have some idea of how precarious this carrying angle is. As you hold the pose, breathe deeply and focus on increasing the space within the shoulders so that there is a clear communication from the right arm, into the right shoulder, across the chest, into the left shoulder, and up and out through the left arm.

A common error in the sun sage pose is to collapse the weight of the trunk into the support arm and leg, and to sag throughout the trunk. By strongly reaching through the head and the tailbone (coccyx) and extending through the legs, the body becomes firmer and easier to support, much as a steel rod is easier to carry than a loose sack of sugar.

If you find it difficult to balance on the edges of your feet you can use the support of a wall, wedging the edge of the top foot against the wall. 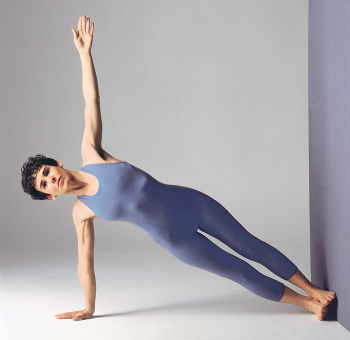 The following three variations are successively more challenging for the lower back, and require progressively greater overall body strength. Work with the variation that challenges but does not tax.

From the sun sage pose, carefully pivot your hips to the left so that your abdomen and chest are now facing the sky. Place your feet hips-width apart with the knees bent and press strongly downward through the balls of your feet. Lower the left arm and place it directly underneath the left shoulder. 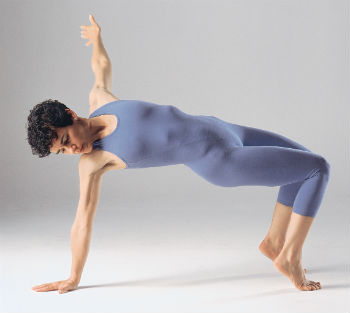 In this first variation with the knees bent, expand the chest upward off the arms, either keeping the head in a level position or bringing it forward to rest the chin on the chest. Draw your tailbone in and up and strongly engage the hamstring muscles at the base of the buttocks to lift the pelvis upward so that it is in line with the lower back and spine. There should be a feeling of lightness in the lumbar spine as you do this. If you have been able to bring your trunk up so that it is level with the floor you are ready to proceed to the next variation. 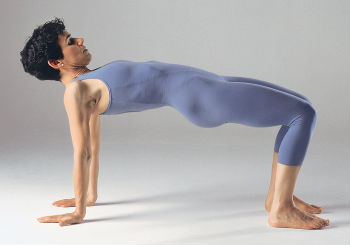 Now extend the legs one at a time, keeping the feet flexed (flexing the feet by drawing the toes up will make it easier to elongate the lumbar spine). Continue to keep the chin resting on the chest as you strongly draw the breastbone upward. This level positioning of the head will make it easier for you to access the muscles required to raise the breastbone and expand the chest. Your chest should be directly centered over the arms; check to see that it is not behind the line of the arms. If it is, walk your feet a little closer to your hands until you can feel the arms in a vertical position underneath the shoulder girdle. 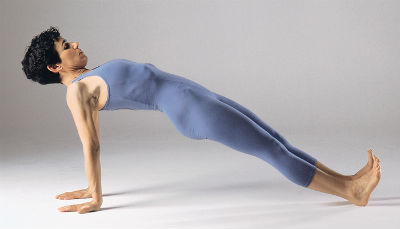 Focus again on sustaining the space throughout all your joints as you move into the final stages of the pose. Extend strongly through the toes now, and as you do so, slowly release the head back into full extension. As you release the head back, continue to sustain the strong lift throughout the trunk, especially the lift through the base of the pelvis. As an alternative practice you can turn the hands so the fingers face toward rather than away from the feet. Practicing both variations opens the shoulders in different ways. Breathe deeply as you stay in the pose for 3–5 breaths.

On an inhalation, transition into the sun sage pose on the left side by pivoting onto the outside of the left foot. Imagine yourself floating up and over the left arm so that you sustain the expansion in the body you have worked to establish in the previous two postures. Breathing deeply, stay here for 3–5 breaths. 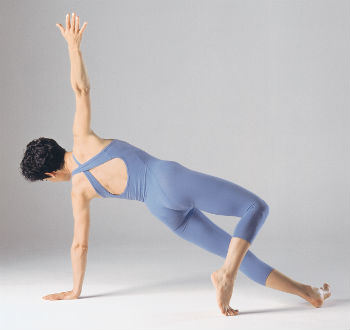 Now comes the fun part! From the great height of the sun sage pose you are going to swoop down into the four-limbed stick pose (chaturanga dandasana). Continue to pivot your body to the left, and as your trunk turns to face the floor bring the right arm quickly underneath the right shoulder. Simultaneously bend both elbows to lower yourself into the four-limbed stick pose. As you bend your elbows, track the elbows in a clear line that connects the wrist to the head of each shoulder by grazing the elbows against the sides of your ribs.

If you allow your elbows to veer outward, the elbow will not be supported between the hand and the shoulder. This “army-style” push-up is inefficient and leaves the elbow, wrist, and shoulder vulnerable to rotational injuries. 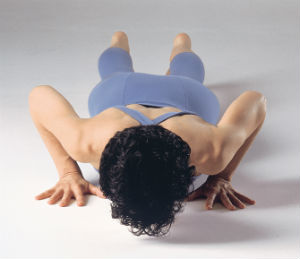 To finish the cycle, swing the chest upward through the arms into the upward-facing dog pose (urdhva mukha shvanasana). Here too, check that your chest is right over your arms, with the breastbone reaching forward like the prow of a ship. 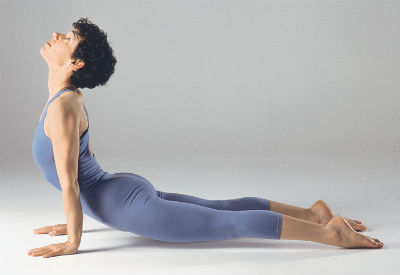 As you work through both the sun salutation and the arm balance sequence, focus on first establishing and then sustaining the cohesion among all the parts of your body. Imagine that on every inhalation you are inflating the floating spaces in your joints throughout your body, and remaining suspended in this expanded state as you exhale. In particular, see the totality of your body in every posture, connecting from the center to your limbs in an uninterrupted flow. Experiment with subtle shifts in your body weight and the positioning of your hands, feet, trunk, and pelvis to find the optimal carrying angle through the joints. When you find this optimal place, the body will feel light and the mind will feel bright and exhilarated.

Experiment with subtle shifts in your body weight and the positioning of your hands, feet, trunk, and pelvis to find the optimal carrying angle through the joints.

Notice your mental response to the demands of holding firm in these strong, cohesive positions. Do you rise to the challenge with enthusiasm, or do you rail against the effort of holding yourself steady and firm? Observe whether you make a wholehearted commitment to the practice, thereby accessing a natural reservoir of energy—or does the ambivalence of half-hearted effort create a heaviness and lethargy that undermines your efforts? Is there a correlation between your response to the demands of these no-nonsense postures and your response to challenges in your life off the mat? Is there a new freedom to be found when we voluntarily work within clearly defined limits?

Donna Farhi is a Yoga teacher who has been practicing for 35 years and teaching since 1982. She is one... Read more