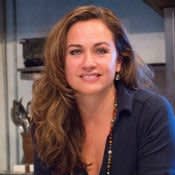 My memory of spring as a child is of hunting along the marshy roadsides for asparagus. My parents would load my three brothers and me up in the truck and off we would go. My mother would say, “Asparagus is good for you.” Truth was, it was free. In fact, we lucked out. Most of our vegetables and fruit came from our garden, foraging, or our grandmother’s orchard. It was a treat for us to be able to traipse through Gram’s trees in hopes of plums, apples, or peaches.

The National Cancer Institute states that asparagus tests higher than any other food for glutathione, one of the most potent antioxidants. It is also a good source of vitamins A and C, as well as riboflavin, niacin, and thiamine, and the minerals iron, phosphorus, and potassium.  Which means that it is, indeed, good for you. My mother will be happy to know that, once again, she was right!

Asparagus has been around for a long time—it was depicted as an offering in an Egyptian frieze dating to 3000 BC. There is even a recipe in the oldest surviving book of recipes, the third-century AD Apiciusde re Coquinaria, Book III. My favorite, aliter patina de asparagis, literally means “another asparagus recipe” because it followed a recipe for asparagus. Aliter patina de asparagis is basically a frittata, made with eggs, wine, and a lot of herbs.

The list of recipes for this seasonal delicacy is endless, but my most recent favorite is Cream of Asparagus soup—so simple and easy to make. (I like to serve cheese toast with this—it’s delish!)

Preheat the oven to 350 degrees.

Snap the ends off the asparagus (they will break where they naturally are meant to). Cut the rest into 1-inch pieces, toss in ½ tablespoon of olive oil, place in a baking pan, and roast for 15 minutes at 350 degrees.

In a soup pot, over medium heat, sauté the onion in a tablespoon of olive oil, until translucent, add the garlic to the pot, and cook until golden brown.

Add the water to the pot and bring to a boil.

Add the roasted asparagus, cream, asiago cheese, pepper, and salt to the pot and bring to a boil. Use an immersion blender to purée the soup right in the pot.

Drizzle in the lemon juice and serve.

Whether you are picking your own asparagus along the roadside or picking it up at your local market, I do believe that you will find its addition to your repertoire of spring recipes as scrumptious as the ancient Romans did!