Contextualizing the Yamas and Niyamas 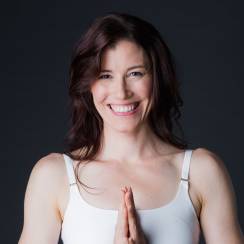 The yamas and the niyamas are the first two limbs (parts) of the eightfold system for spiritual practice, as outlined by Patanjali in the Yoga Sutra.

The first limb is composed of five external observances (yamas), which can be seen as guidelines for navigating one’s worldly conduct. The second limb lists five internal observances (niyamas), which are guidelines for navigating the relationship with oneself. The remaining six limbs are progressive steps to the state of yoga (posture, breath control, withdrawal of the senses, and three limbs for stages of meditation).

When I first learned about the yamas and the niyamas, they were described to me as “the Ten Commandments of Yoga.”

The five yamas are:

The five niyamas are:

• Surrender to the highest (isvara pranidhana)

Taken at face value, these guidelines could be interpreted as rules for moral conduct. After all, they sound like some of the commandments described in the Bible—such as “Thou shalt not kill” and “Thou shalt not steal.” However, to develop a more sophisticated relationship with these guidelines, we must first endeavor to remove our own cultural biases and meet them in the context in which they were written.

In sutra I.2, Patanjali states: “The restraint of the modifications of the mind-stuff is Yoga” (translation by Sri Swami Satchidananda). Paraphrasing the next two sutras, Patanjali states that when we calm the fluctuations of the mind, we recognize our true Self (purusha). However, when the mind is active, we misassociate our core identity with its fluctuating content, such as our thoughts and feelings.

In these first few sutras, Patanjali summarizes the purpose of yoga: stilling the fluctuations of the mind so that we experience our true Self (purusha). When we experience purusha, we recognize that our sense of wholeness does not come from something outside of ourselves, but can be found only within. Unlike the Ten Commandments, the orientation of the Yoga Sutra is not ethical; Patanjali does not propose that we will be good people if we follow these principles. Rather, the goal is to help us calm our minds so that we recognize and identify with our true nature.

When we experience purusha, we recognize that our sense of wholeness does not come from something outside of ourselves, but can be found only within.

Consider the first yama, non-violence (ahimsa). Bring to mind a time when you were in conflict with another person. What was the quality of your thoughts? Conflict is unsettling to most of us, and it’s likely that your mind became awash in narratives, justifications, and predictions. The impulse to believe these stories—rather than rest in an identification with purusha—disconnects us from the state of yoga, in which we recognize our true Self. For the yogi, practicing non-violence is not necessarily moral; it is a practical choice for retaining one’s equanimity.

The Yamas and Niyamas as Signposts

However, even if we contextualize the yamas and niyamas as practical guidelines rather than moral prescriptions, it can still be tempting to interpret them as rules that we are supposed to follow. And when we follow rules, we are exporting responsibility for our behavior to an external authority, rather than acting from our own internalized values.

If I am in a situation in which I’m inclined to lie, but I then remember that I should be truthful, I may then act truthfully only because I remember the rule rather than because it’s what I really want to do. While this choice could be a step in the right direction, spiritual growth ultimately requires that we internalize our values rather than follow external dictates. Instead of viewing the yamas and niyamas as rules for spiritual growth, a more powerful interpretation could be to view them as naturally arising indicators of our spiritual progress.

Many of us have noticed that practicing yoga has positive effects in our lives off the mat. Over time, we may become more compassionate, more mindful, and less compulsive. We may become less likely to believe all the stories in our heads, and more likely to pause before reacting. On a practical level, we are internalizing Patanjali’s goal of yoga: We are less connected to our mind’s stories and more identified with our true nature.

From this perspective, our internalization of the yamas and niyamas (non-violence, truthfulness, non-stealing, continence, non-grasping, cleanliness, contentment, accepting intensity, surrender, and self-study) is a sign that our yoga practice is working.

Positioning the yamas and niyamas as friendly signposts for our spiritual progress not only allows us to acknowledge our growth; it also gives us practical tools for noticing when we hit obstacles and veer off course.

To give a real-life example: As I approached the age of 40, I was extremely keen to find a partner because I was running out of time to have children. I became increasingly anxious about my dwindling window of fertility. Then, one Friday night, I had a spectacular date! After just one promising meeting, my mind began spinning wonderful stories of our future wedding. When our next date revealed some clear red flags, I was plunged into despair and feelings of hopelessness. When I noticed how my thoughts were spinning out of control, I took a step back to try to figure out why.

Clearly, I was out of alignment with the principles of non-grasping (aparigraha) and contentment (santosha). While there was nothing wrong with wanting to have a family, my attachment to that outcome revealed that I was grappling with some core beliefs. Upon deeper reflection, I realized that I believed that my sense of worth depended on having a traditional family life with a husband and kids. When this belief was exposed, I asked myself: Is it true that I am unworthy without a family? Could something outside myself ever make me feel complete? Many people feel no need to have children; are they somehow worth less?

When I could “restrain the fluctuations of mind-stuff” and sit in a quieter space, I was able to recognize that my worth did not depend on anything outside myself. This insight helped me to navigate that very challenging time in my life with more perspective. Rather than believe all my thoughts (or feel compelled to get involved in a relationship at any price), I could use the experience to practice connecting to the deeper sense of Self that lay beyond the fluctuations of my mind.

When we fall out of natural alignment with the yamas and niyamas, it might be a sign that we have forgotten our true nature and are instead identifying with our stories. These moments become empowering opportunities to investigate with curiosity—and then to heal—whatever it was that triggered the disconnect. While it is the work of many lifetimes to perceive and untangle our conditioning, the yamas and niyamas can help expose those places where we get hung up.

Reframing the yamas and niyamas as signposts for our spiritual journey can enable us to use them as powerful and practical tools for self-awareness and growth. They are something of a compass that shows us when we are aligned with our practice, and when we are off course. Not only can they help bring to light the hidden beliefs that underlie our behavior, but they can provide continual reminders to source our sense of wholeness from within.