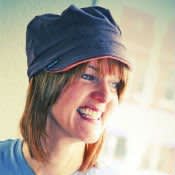 When you hit the mat in the morning, is the laundry pile behind you performing a better mountain pose than you are? Are last night’s pajama pants standing in for yoga pants? And does your loose midriff like to break loose of your improvised yoga ensemble? Me too! But if we look to Instagram for real-life inspiration, we might get the impression we're alone here—that yoga isn’t for people like us. It must be for “them”—the glowing ones with pristine practice spaces and trendy psychedelic Monet yoga tights.

When you hit the mat in the morning, is the laundry pile behind you performing a better mountain pose than you are?

It’s not that realistic yoga selfies don’t exist, it’s just that they don’t gain much traction. I’m not a huge yoga selfier, but I do like to capture a spontaneous shot when I get smacked by revelation. But realistic-looking posts don’t get a lot of likes and follows. And that’s just a little discouraging for us real people. It makes us feel bad about being…real.

If you want to search Instagram for the reality of yoga, you might try a hashtag like #yogaeverywhere. This implies real places and real moments, right? Let's see. Under #yogaeverywhere you’ll find a mix of the following: selfies in yoga poses, selfies not in yoga poses (i.e. the rampant ab shot), memes, pretty items, and food. Wow—yoga is everywhere! Great. But let’s say you’re that pajama-bottomed girl browsing the hashtag after your practice. Looking at the yoga pose selfies alone, you might notice two categories emerge: 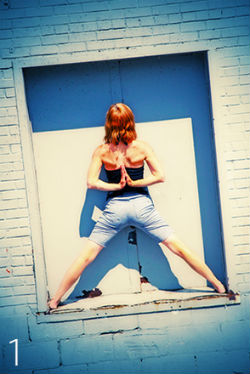 1. The Object Is Art

The object of the shot is art, and the subject is yoga. (Notice image 1.) This type of yoga selfie generally includes the following characteristics: There is a wardrobe. There is staging. Rules are followed. The result is gorgeous, sometimes breathtaking, but always with artistic distance. 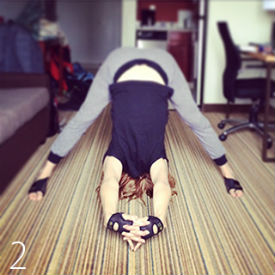 The object of the shot is yoga, and the subject is life. (Notice image 2.) Characteristics of Yoga Object selfies include: The moment is spontaneous, with minimal staging. Rules don’t enter the, uh, picture. The result is alive, relatable, connecting.

Now let’s be clear, Instagram is a photo-sharing app based around using easy tools to make pictures look awesome. And as humans, we like art. We are unconsciously drawn to specific artistic traits of images. So you like that shot of the sleek body against the dark, out-of-focus background? S'okay. We’re wired that way. But are we interacting on Instagram for the sole reason of reflexively rewarding things we’re wired to react to? Or are we maybe looking for a reward ourselves? A little connection on that kind of media—what’s it called again?—oh yeah, social media. Social.

Here it is, that claim I often hear about those Art Object Instagram accounts with 200,000+ followers: "These photos inspire people to practice." But do Art Object selfies really inspire people to practice? Or do they inspire people to look? Here’s a logical take on that: Yoga pose selfies that are artistically optimized to bring about unconscious engagement are by nature two-dimensional; a clearly defined object in a dimensionless setting. They lack the dimension of the setting, but more than that, they lack the whole dimension of the yoga subject’s life.

Those other shots, the ones where the backdrop is a pile of laundry? They’re alive. The yoga subject’s life is captured. And it may just look a little more like your life than that polished vignetted marble floor. So, are the high-engagement Art Object selfies inspiring practice, or are the low-engagement Yoga Object selfies doing it? Dang. We Instagram hacks got a job to do. So let’s learn more.

If you want to engage lots of people in your photos unconsciously, science tells us how. There’s been a slew of research recently on what we like to look at in images. Many of them draw on a 2011 study with one of the hugest data sets ever used—more than 20,000 photos with at least 100 evaluations of each one. It identified two clear traits that we are unconsciously attracted to in photos. Here they are, directly quoted from the study (followed by a little commentary from me):

(i.e., Make sure your leggings and midriff-baring bra top are sleek and form-fitting, your form has killer definition, and you kick the shit out of the laundry pile until it’s out of the shot (bonus: quadriceps definition boost!) And bros: no shirt, please.)

2. “One dominant color [sunset images are given as an example], or complementary colors (e.g. red and green, blue and yellow)."

(Those sleek leggings of yours better be red, and what are you waiting for, paint your biggest wall green! Now! Or, do what the study says and get your ass to a beach at sunset.)

It’s Up to Us to Inspire

The number one mission of this movement is to get more conscious about what we affirm on social media. Because as all yogis know, what we affirm will grow. So let’s grow some yoga. Hit that little heart icon on the yoga selfies where there’s some real life in the shot.

The number one mission of this movement is to get more conscious about what we affirm on social media.

If you’re still with me, here are some rule-breaking rules. It’s how not to fall prey to the almighty follower carrot. Again, just two items:

1. Don’t Hide Behind a Clean Backdrop

The place you practice is what it is. It is not always clutter-free or uninhabited. It is the picture of your life, in this moment. It is alive as it is. If there is a pile of crap behind your normal yoga spot, leave it. The perfect backdrop tells those without the perfect backdrop that yoga is for "those people." The ones with crapless backdrops, crapless lives, the perfect environment. But we all know yoga is about the crap. It’s for people with crap. It helps everyone see their crap, not hide it. So let’s yoga-up, and stop hiding our crap.

But hey, let's be realistic. Letting it all hang out is hard, and not entirely necessary. So go ahead, blur that background. It’s still there, reminding people that they (and their piles of crap) are okay, but now, more people will notice your photo in the first place. Use that science for good!

2. Hamper Excavation and Other Comfort Clothes

Straight up, I like to advocate for re-use and conservation with my morning practice wardrobe. Why would I wear something that I just have to wash after an hour’s use instead of that thing from the hamper that got a good 16 hours on it yesterday? Sure, clean lines are nice. But comfort is soooo comfortable! So, why not pull on that favorite tri-blend graphic tee? Yeah, get crazy, wear a shirt with sleeves (that surely cover highly defined deltoids). And grab the tee with more than one—nay, more than two!—colors. Take that, rules of unconscious engagement! Because this is who I am. This is what yoga looks like on me. This is the yoga in me showing up. And yeah, sometimes, my midriff shows up (usually uninvited to the inversion party).

Sure, clean lines are nice. But comfort is soooo comfortable! So, why not pull on that favorite tri-blend graphic tee?

And okay, a rumply pajama top does make for rather rough edges, so if you want to smooth them, just remember the clothing mantra I’ve chanted thousands of times to yoga newbies: comfortable but not too loose clothing that moves with you. You’ll ultimately have a better practice experience if you’re not tugging fabric around, and your selfie’s edges will call out to real people who happen to be pulled to your post by your newfound proficiency…in soliciting their unconscious action.

Let's be really conscious about the action of taking our selfies. In real-time. Art Object selfies require lots of staging, and that staging becomes the focus of your practice for as long as you take to get the shot. Yoga Object selfies are spontaneous, alive. They’re imperfect. Sometimes they’re attempts, not achievements.

And let's be real with our text too. Write something that's alive in you, informed by your practice, that needs to be said. Say it to those needing connection as much as you do. Have fun making up relevant, witty, and funny hashtags that make the life in your selfie obvious. But unless you have 200,000 followers, you’ll  need to use several established yoga hashtags. Look at what engagement-getting users are using. Yeah, #yogaeverywhere, but also #yogachallenge #yogaeverydamnday #yogalove. There’s a ton, pick the ones with high usage that are meaningful for you.

Have fun making up relevant, witty, and funny hashtags that make the life in your selfie obvious.

And let’s see if we can get #RealLifeYoga to take off. More spontaneous moments captured, less staged ones constructed. Now we know it’s our job to inspire practice in the Instaverse, and beyond. Let’s do this.