The Mythology Behind Garudasana (Eagle Pose)

Although it is called “eagle pose” in English, garudasana is named for a divine creature. In South Asia, a garuda is a huge, mythical bird with the golden body of a man, a white face, red wings, and an eagle's beak. He is the king of the bird community, the enemy of snakes, and the friend of humans. Garuda is the vehicle of Lord Vishnu, the aspect of divinity which sustains the universe and takes birth as a man. Rama, hero of the Ramayana, is one of Vishnu's divine incarnations.

Garuda's cousin Jatayu is sometimes described as a vulture, but he is no more an actual vulture than Garuda is an eagle. Jatayu is a garuda, and the hero of this story.

The Ramayana tells how Rama's wife Sita was kidnapped by the demon Ravana and carried off to Lanka in a vimana, a flying machine. When these events occurred, Jatayu was sitting contemplatively on a treetop, his keen eyes scanning the world's horizon. He heard Sita's screams, saw Ravana hurtling through the sky, and flew into action. He hit the vimana head­-on, knocking it to the ground. Ferociously he attacked Ravana with pointed teeth, tearing claws, and powerful beating wings—but he was no match for the demon king's ten heads and twenty arms. For every head or limb that he lost, Ravana grew another before the first had finished falling. Jatayu fought fiercely and valiantly, yet increasingly hopelessly. Finally, Ravana hacked off both of Jatayu's wings and zoomed south toward Lanka, while Sita huddled in silent shock on the floor of the beautiful luxury car. 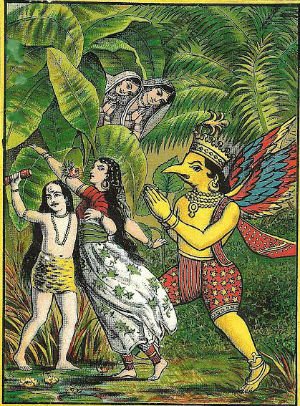 As Jatayu lay mortally wounded, Rama and his brother Lakshmana, who were tracking Sita, arrived on foot. With failing breath, the fallen warrior told them in broken phrases: “Sita, Ravana, headed south....Rama, please, kill me. It is a blessing to die at the Lord's hands and in his presence.” Rama, always kind but never sentimental, shot one swift arrow through Jatayu's brave heart. Then he and Lakshmana gathered wood, built a pyre, and performed Jatayu's funeral rites with as much care as they would for a member of their own family.

Begin in tadasana, standing with your feet parallel and hip width apart, your arms at your sides, and the crown of your head rising toward the ceiling. Widen your peripheral vision.

1. On an inhale, raise your arms to shoulder level with palms facing up.

2. Exhale, bring your left arm over your right so that they are stacked with the left elbow on top.

4. Bend your knees, and shift your weight to your left foot.

5. Cross your right leg over your left above the knee.

6. Wrap your right foot behind your left lower leg, and see if you can hook it over the left calf or ankle. On the top half of your body, left wraps over right. On the bottom, right wraps over left. (If you can only bear full weight through one side, do not wrap the legs. Instead, keep your feet parallel, bend the knees, and take your hips back into a high squat as you would for chair pose.) Balance. Draw your hip points toward one another. Draw your navel back and up. Breathe. Imagine that you're an eagle poised in the sky, still to all outward appearances, but intensely active and present inwardly.

7. Breathe smoothly. Lift the base of your skull. Lean slightly forward from your hip crease, but lift your chest. Continue to press your forearms in opposite directions, widening through your shoulder blades. Focus your gaze on the inner edges of your hands, like an eagle soaring and sighting.

Pay attention to the qualities of softness or hardness in your breath, your body, and your eyes. Notice if your eyes want to harden and move forward, especially when you focus keenly on your hands. Can you be soft and focused at the same time? Can you keep your muscles active and your breath soft? Experiment with breathing into the back of your lower lungs, expanding the ribs like wings on the inhalation. Breathe like a gliding bird.

Pay attention to the qualities of softness or hardness in your breath, your body, and your eyes.

Remain in this pose for 30 to 60 seconds, then return to tadasana.

Repeat with the right arm on top and the left leg on top.

Garuda is the vehicle of Vishnu, the preserver/sustainer/protector of the creation. Vishnu's name comes from the root vish, which means "to enter into," ­ "to pervade." Visnu sustains, preserves, and protects the universe by entering into it, never for a moment being absent—just as in meditation you choose an object of focus and then, to sustain your meditation, you continually choose that same object again and again with each moment. Contemplate what it means to preserve and sustain. What qualities would you need to be the vehicle of the preserver? How do you breathe as the vehicle of preservation? How does that energy feel in your muscles and bones?

Try the pose again. As you sustain it, let your awareness pervade every part of your body, your breath, your sense organs. Be equally present everywhere. When you find any part of your attention wavering, renew your commitment to being present there. Where is this most challenging?

Ask yourself: when ego­-related concerns threaten to disrupt my practice, how do I muster the garuda­-energy to protect it?

Jatayu/Garuda's natural state is one of sustained attention. His dharma is selfless service, protecting the creation and everything in it. His enemy, Ravana, personifies ego-centrism. When Ravana kidnaps Sita, his action disrupts the creation, just as desires and claims of the ego arise to disrupt your practice. Jatayu tries to fulfill his role of protecting the earth and all its inhabitants. But, as valiant as Jatayu is, the ego is hydra­-headed and thrives on any type of ignorance. Cut off one head and another pops right up. Ask yourself: when ego­-related concerns threaten to disrupt my practice, how do I muster the garuda­-energy to protect it?

Why does Rama kill Jatayu in this story? Compassion. It is, as Jatayu says, "a blessing to die at the Lord's hands or in his presence." In Indian tradition, such a death virtually assures the devotee's liberation. Although this part of the story might make us feel sad, it also reminds us that, as Krishna (another avatar of Vishnu) says, it is better to perform one's own dharma, even if imperfectly, than to try to fulfill the dharma of another (Bhagavad Gita 18:47). Jatayu does his absolute best, and the result for him is release from suffering, granted by the Lord himself, even though he fails in his immediate aim of rescuing Sita. As the saying goes, he loses the battle but wins the war. Think about this for a moment. Have you ever tried your best in a difficult situation and thought you'd failed, only to find that the end result was much, much better than you could have planned?