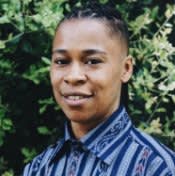 The Yoga + Social Justice Collaborative is an organization dedicated to exploring the relationship between spiritual practice and social justice through collaborative gatherings, education, and service. The blog series shares the thoughts and practices of our members and supporters. We invite you to join the conversation!

When it comes to our understanding of gender in this country, there are three paradigms:

The world as it is.

The world as it should be.

For many Western yoga practitioners, the 70s represent a massive shift in consciousness—that period saw the rise of yoga in the West, liberation movements for women, gay people, and people of color, and the emergence of sexual freedom. But in many spiritual spaces, understandings of gender have remained stuck in the 70s while they have continued to evolve elsewhere.

The practice of yoga offers conceptions of fluidity and non-duality which can powerfully support our understanding of gender. Spiritual practice provides the space to be fully present with what is, without fixating on illusion, the past, or the future. Isn’t our practice supposed to be the place for our contradictions, questions, and ways of being that can lead to more liberation both personally and collectively?

We live in a world where we gender everything—for no good reason. This does not have to happen in our yoga spaces, however. Do instructors really need to refer to students as ladies and gentlemen? Also, instead of giving instructions that can account for different kinds of bodies, some yoga teachers will make gender-based assumptions about adjustments, suggesting, “Men, do it this way, but women, do it this way.” To be sure, in a culture which hates and demonizes femininity, many yoga practitioners’ desire to re-center the Goddess and Divine Feminine is both radical and important. However, to do this by reinforcing outdated gender norms is damaging to all of us.

We live in a world where we gender everything—for no good reason. This does not have to happen in our yoga spaces, however.

Asserting a narrow view of gender in our yoga practice has the unintended consequence of reinforcing patriarchy, which seeks to rigidly define the actions and behaviors of people of all genders.

Even where I live in the Bay Area—the proverbial end of the rainbow for someone seeking sexual and gender liberation, space to build community with people of color, and acceptance in a spiritual community—I am still asked to fit myself into a gender box that does not work.

I have been in numerous spiritual spaces where I’m consistently mis-gendered: expected to wear a skirt because that’s what women do, referred to as “sister,” and in a host of other ways expected to perform a version of womanhood that does not match the experience of any woman in the room. Not to mention that as a black, genderqueer person my relationship to society’s definition of womanhood, even black womanhood, is much more complicated.

But . . . there’s good news. There are a number of things, both simple and not-so-simple, that can upgrade your understanding of gender, your yoga practice, and your life:

1. Stop gendering people, places, things, and energies. Just stop. NOW! Once you start to notice how often you feel compelled to do this, it will shock you.

2. Don’t make assumptions about people’s gender. A good place to start is by asking folks their pronouns. But this is not enough. Challenging our assumptions around gender means accepting that we live in a world with infinite genders. To avoid mishaps, just stick to gender-inclusive terms.

3. Let go of the binary. Femininity and masculinity are not opposites. Consider other ways that binary, either/or thinking interferes with your practice.

4. Create spiritual communities that center those who are most often excluded from yoga spaces: women of color, including trans women of color, trans or gender non-conforming folks, femmes, queer people, people of size/fat folks, poor people, and people with disabilities. You’d be surprised how the culture of a space can either invite or exclude people from these communities.

Investing in spaces led by social justice yoga practitioners who are marginalized (i.e., people of color, queer and trans people, etc.), as well as promoting the leadership of radical practitioners who are underrepresented, can go a long way to shift culture. But again, this is just the first step. Equity requires a rigorous practice of self-reflection, accountability for your power and privilege, and a commitment to redistributing power and resources.

5. Embrace change. Our consciousness around gender is changing a mile a minute. Educate yourself and don’t resist the new ways people are inhabiting their bodies and experiencing gender. You might learn something.

Because our very presence interrupts the status quo, trans, genderqueer, and non-binary people of color are often pushed out or denied access to spiritual spaces altogether. The worst part of the antiquated understanding of gender in our spiritual communities is that the very people being excluded are the spiritual warriors we need to achieve collective liberation. Those of us who live in these complex intersections have something to say about spiritual justice and about the process of inhabiting what it means to be fully human. We have cultivated these skills out of necessity and survival, but they contain the antidote for all of us.