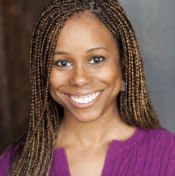 This is the first individual spotlight in of the , a collaboration between the Yoga and Body Image Coalition and Yoga International based on the that launched in 2014 and their continued work in challenging stereotypes, growing community, working collaboratively, and highlighting the diversity of yoga practitioners and yoga practices, as well as their staunch commitment to diversifying yoga media.

Yoga found me in the ordered chaos of New York City, during a Shakespeare intensive in the beautiful halls of The Public Theater. One of my cohorts identified herself as a yoga teacher, and yoga then became part of our holistic training to increase stamina and process the intensity and complexity of the work. It was probably one of the most intimate activities I’d ever encountered.  We began each day with sun salutations, recited sonnets while holding “awkward chair,” and allowed the dust of Bard clouds to settle in savasana. All of it motivated me to continue practicing in my local gym, and eventually in the city’s studios.

Yoga helped me navigate the noise of New York—to float or fly, rather than strain or rush across the city. In addition to helping me grow stronger and more focused, it was deliciously expansive. One of the most salient benefits of my practice was that it allowed me to manage the anger and anxiety I experienced from the sexual harassment of New York streets. The comments, hisses, lunging, and other intimidating behavior so many women experience challenged my ability to feel safe and at home in my own skin. I realized that, for me, yoga was essential for metabolizing the toxic stressors weighing on my body and mind.

Although I have often been the Black person in the room, I think there are few cosmopolitan arenas in which the issue of diversity is as disappointingly apparent as with Western yoga. I had been taught to honor its authentic roots and to practice humbly. But when yoga magazines, studio marketing archetypes, and popular media images project only the young, White, slender-bendy, serene woman with skin-tight white Lycra, that becomes the picture not only of what a yogi looks like, but of what yoga is—all tattooed on the collective unconscious.

I have been given many privileges. My immigrant parents worked extremely hard to send me to the best schools, where I made lifelong friends, thrived as a student, and held leadership roles. I know how to speak up for myself if I need to (although I also know the rules: you are twice as good, or nothing). But I felt very out of place when I received a chilly dismissal at a popular chain studio for asking for a discounted 10-class pass—it was the 20-card, the exorbitant single class, monthly, yearly, or nothing. There was no room for discussion in the bustle of those eager to get their yoga on, everyone tuned in to what seemed the same consumer frequency. I was a bit taken aback at the lack of connection from the woman at the desk. And looking around at the tiny overpriced sweats and glaringly monochromatic pictures of those whose patronage was sought for the studio, I felt small and insignificant for the first time in a yoga context. I am polite but fierce, and I am rarely at a loss for words. But I found myself dismissed and speechless—yes,by the financial rules of engagement, but mostly by the tone of the interaction. It seemed dissonant with the yoga I’d known. Ears ringing “et tu yoga??”  Eyes confirming “oh…yes.”

So how can the themes offered at the front of the room (one of our many modern pulpits), resonating in the hearts that bow before it, be expected to contain that which is unseen? Even when the theme is the unseen, it is rarely referring to that unseen.

And there is a price we are paying: the many people who are not allowed non-medicated benefits in order to address their anxiety, depression, trauma, and addiction—in short, to navigate the chaos of their environments, as I have mine.

Teaching yoga at a mindfulness retreat this month, a Black couple approached me and thanked me for my presence—saying that teachers aren’t representing these communities, are not letting them know they belong. I sometimes feel guilty because I can only extend one offering at a time, and my primary arenas right now are psychotherapy and mindfulness. And few studios are looking for creative (and somewhat inconvenient) ways to reach out, with cultural humility and without body shame and ageism.

When I see another one in the room, I smile and know that slowly, slowly but surely, it is happening. And I am extremely grateful for the efforts of publications such as these, and the innumerable allies I daily encounter.