How do we practice yoga in times of crisis? 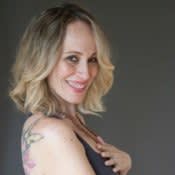 “Feel the luminosity in your heart, which can’t be perturbed by external forces,” said my friend and fellow teacher. She eased us into savasana with a loving presence that enveloped the entire class. It was the first time in weeks that I was able to truly inhabit my practice.

I live in Houston, Texas, and my city had just been devastated by hurricane Harvey. I was raised in Mexico City, where I had experienced many destructive earthquakes, so I was no stranger to natural disasters. I also knew the drill for hurricanes—the frenzy in the supermarkets and gas stations to prepare for the storm, and the "hunkering down" and waiting it out. But Harvey was a different creature. We were supremely close to being a city underwater, and the anxiety I felt before the hurricane was overwhelming.

As a trauma-informed yoga teacher and mental health counselor, I, of course, tried to help others connect to their practice. I joined forces with other Houston yoga teachers on Facebook Live. We knew that, like us, our friends and family were trapped in their homes with no place to go as the apocalyptic flood invaded the city. As hurricane Harvey swallowed Houston, I watched jovial Facebook posts about looking forward to Netflix binges morph into terrified pleas for help, with thousands of people turning to social media to coordinate rescue missions.

People were desperately seeking to escape homes that had become terrifying prisons. In many cases, they were wading in chest-deep water to boats, with dogs on their backs and children in tow.

Two of my friends had not previously been considered “emergency situations” and were rescued thanks to social media. They could climb to their second floors with their families as water flooded their first floors. While they had no power or food, they could breathe, and they were on a mile-long list that overwhelmed first responders who were struggling to reach those in need of help.

I had just moved to a new home the week prior to the storm. Because the house was a stranger to me, I didn’t know how it would behave—if it would sustain us or allow the storm to engulf us. It rained for more than three nights in a row, and like most of the residents in Houston and surrounding areas, I didn’t sleep any of those nights (as if my wakefulness could help to prevent tragedy).

During that time, I practiced yoga in erratic, unsatisfying bouts. It was frustrating to want so much to practice, and to feel my practice more out of reach than ever. The mat, usually my refuge, became a stranger. I felt guilty, as though I had abandoned a part of myself. But my nervous system was shot. I was glued to social media, sharing information, helping as much as I could from my home.

I practiced yoga in erratic, unsatisfying bouts. It was frustrating to want so much to practice, and to feel my practice more out of reach than ever.

The minute the waters started to recede, I wanted to be out in the world with my counseling skills. I knew I needed to go to the George R. Brown Convention Center, where more than 8,000 people were taking temporary shelter. I had done this kind of mental health crisis work many years ago, right after Katrina hit and thousands of people fled New Orleans and took refuge in Houston. I was grateful that other intrepid colleagues were as intent as I was on doing this work, because I didn’t know which roads were still underwater and I felt safer riding with them.

Our entire city and surrounding communities endured a collective trauma. Those of us lucky enough for our homes to be spared were grateful for our good fortune, and we scrambled to help more and cope with survival guilt. Those whose homes flooded will be dealing with the emotional and financial losses for many months or years to come.

Despite this, the love, generosity, and courage that flowed from people seeking to help each other was breathtaking. Our city was a true embodiment of the pure love that yoga teaches us is possible.

Yoga studios began to open their doors again, and one teacher who lost her home and belongings to the flood taught a hauntingly beautiful mantra class. She said that using her voice and her teaching became her vehicle for healing. I gifted her two objects for her altar: a rose quartz heart and a gold pendant I bought in Sayulita, Mexico, which says "Haz lo que Amas," which means "Do what you Love." I gave them to her as a symbolic gesture—to help her feel that wherever she is living temporarily, she can create through her practice a sense of being at home.

When I began to feel more rested and connected to myself, I also began to realize that I had been holding onto a rather rigid concept of what my practice should look and feel like.

During times of crisis, we are often told common sense things like “Take a deep breath” or “Do your yoga practice!” Paradoxically, however, our hyperactive nervous system may make the practice as we’ve known it inaccessible. This can leave us feeling defeated, or even worse, totally disconnected from yoga at a time when we need it most.

But what if our relationship with our practice were like any other relationship? A complex, rich, and ever-changing one that ebbs and flows with the changing seasons of our own internal and external processes? Seeing it as such would free us to witness the beauty of yoga manifesting as seva (selfless service) when a natural disaster occurs and we are too preoccupied to do asana and mantra. At such a time, we may need instead to be in the presence of suffering, to step off the mat and offer our support and our practice to others.

Recognizing the complexity of how we can lean into our practice can also free us from our preconceived ideas of what it should look like—without shaming ourselves, and trusting that we can discover new ways to connect to it so that it can then expand to fill our entire community. Perhaps it would serve us to re-evaluate the intentions of our practice. Is our practice ever only for us? Or do we see in moments of crisis that our practice is always, inherently, not only about the self but about all living beings?

Yoga is, after all, a never-ending invitation to study the self.

Svadhyaya, self-reflection, is an inherent part of our practice. When we gift ourselves moments, however minuscule, of self-reflection during times of crisis, we are able to access higher functioning states for our nervous systems and our minds. We also build the capacity to show up for ourselves and others in ways we never could have imagined.

This piece is dedicated to my beloved, resilient, and generous Houston, Texas. #houstonstrong

Elizabeth is the originator of THRIVE, a trauma-informed yoga system which weaves together trauma research,... Read more