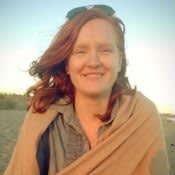 Bulletproof coffee is odd, so odd, in fact, that it’s almost a dare. Grass-fed butter and coconut oil blended into your morning cup of joe? It’s as if the entire blogosphere is saying “I double-dog dare ya!”

Pepper this with feedback from friends who have tested this elixir and the allure becomes substantial. It’s hard to misinterpret phrases like “life-changing” and “revolutionary,” especially when coming from my most naysaying of naysayer friends. I wanted to give it a go, and that's why...

I drank bulletproof coffee for one week so that you don’t have to.

To be fair, I’m a total sucker for whole-food solutions to wellness. It’s my inherent hippie sensibility. I’ve brushed my teeth with coconut oil, washed my hair with baking soda, engaged in daily ayurvedic dry brushing and tongue scraping…and I could keep going. But then there are suggestions so peculiar that your interest is piqued. Most recently, this brand of intrigue was delivered to me by bulletproof coffee.

Trademarks notwithstanding, adding butter to hot drinks is a longtime tradition in many parts of the world.

Bulletproof coffee was brought to the forefront of pop culture by David Asprey, an American technology entrepreneur. He published the preparation for his buttered coffee beverage on his blog in 2009 and has since branded "Bulletproof Upgraded Coffee" products accordingly. Trademarks notwithstanding, adding butter to hot drinks is a longtime tradition in many parts of the world. Mixing spiced butter into coffee is common in Ethiopia, and hot tea with yak butter is a staple drink of Tibetans who live at high altitudes.

Like so many “health hacks,” the bulletproof coffee claims sound magical. It triggers weight loss. It staves off nagging cravings. And it boosts cognitive function, producing laser-like focus and mental clarity. All that and more, the peanut gallery boasts. I wonder, would this potion clean my house, even?!

Of course, equally strong commentary has emerged to rebuff the claims. Some dietitians state that there is no scientific basis for these assertions, and that any sense of alertness is nothing more than a caffeine buzz. Additionally, it is recommended by proponents to consume bulletproof coffee in the morning in lieu of breakfast, but critics argue that displacing a potentially nutritious meal with something that is low in essential nutrients is not the smartest move, nutritionally speaking.

I couldn’t be swayed, however. I bought myself some Kerrygold grass-fed butter, Equal Exchange fair trade coffee, and your run-of-the-mill organic, unrefined, virgin coconut oil for about $30. With that, I was good to go.

The recipe called for five ounces of fresh coffee, one tablespoon of grass-fed butter, and two tablespoons of coconut oil, whipped in a high-powered blender until frothy. Done and done. About 20 seconds in my blender, and my morning joe had the look of a delicious latte. I sipped my first bulletproof brew with active attention. It tasted...good. Yummy, even. The coconut oil emulsified in the hot coffee gorgeously, and the butter lent a creaminess that felt like a warm hug for my insides. Things were looking up.

The recipe called for five ounces of fresh coffee, one tablespoon of grass-fed butter, and two tablespoons of coconut oil, whipped in a high-powered blender until frothy.

Fast forward about 25 minutes later, and I was energized. Boy howdy, I was firing on all cylinders. Too much, actually. It wasn’t the jitters or a spazzy sort of energy. I was electric. My body temperature was warming and my pulse quickening. I was prepared for this, however. Anything which boasts a metabolic boost can have this effect. I learned after the fact that it’s best to start with one tablespoon of coconut oil and gradually increase to two over time so as not to jump out of your own skin. Duly noted.

Mentally, I was a rainbow laser beam of focus. I sat down to work and fully realized thoughts and sentiments just poured out of me. Dang, is this how Hemingway wrote?! It was hunger that ripped me from this trance around 10:30 a.m.

Day Two had me pumping the brakes a bit. I cut the coconut oil to one tablespoon to reduce the effects of the metabolic stimulation. Today I was hoping my BPC would tide me over until noon, just like my large green smoothie that I normally enjoy for breakfast.

Not so much, it seemed. My mental focus and clarity were still on point and the electric quality of Day One was subdued, but I found my tummy was rumbling at 10:30 a.m. I felt energized and invigorated with no discernible “crash,” but I was hungry, nonetheless.

Monday: Time to truly test the mettle of BPC. Five meetings at variously opposite ends of the city, and with a bike commute to each. This potion had to take me to noon. I needed protein on my side, so before my BPC, I went straight to the bottom of a glass of coconut water and hemp protein to see if it would help stave off hunger.

Monday: Time to truly test the mettle of BPC. Five meetings at variously opposite ends of the city, and with a bike commute to each.

Here’s where it gets awesome. I flew on my ride to that first meeting, felt like the rubber wasn’t even meeting the road. I was focused and sharp, never felt more artful on my bike in navigating down city during rush hour.

Two meetings and five miles later, I was still cooking with gas. By 11:30, I had a dull headache, but I suspected it was due to mild dehydration from my sweaty rides. I was pleased, nonetheless. It was progress.

Certain lessons lose their impact if you don’t learn them the hard way. Case in point: a second cup of BPC. Seriously. Don’t do it unless you have bail money or a buddy on hand to ensure that you don’t do something regrettable, like head-butt a police horse.

It was a morning with thick humidity, and slowly sipping a hot, creamy drink felt counterintuitive at best. I missed food in the morning. Green smoothies, avocado toast, fruit salad, the works. And iced coffee…delicious, delicious iced coffee.

(Moment of silence for all the iced coffees out there without a Rhode Islander to drink them.)

Bright side? Introducing protein was a game-changer, and now BPC kept me running straight to lunch. The heightened mental clarity and focus was tremendous. BPC was nothing if not efficient.

In the homestretch, I was suddenly confronted with a very relevant issue. Coconut oil and grass-fed butter have an energizing quality in that they are fats, through and through. As a rule, fats and water are kind of at odds, which is a considerable matter for indoor plumbing. This struck me like a ton of bricks as I was washing dishes. I noticed that everything in the sink was thickly coated in a greasy film. I’m no plumber, but a flash of panic hit as my mind speculated about what all the emulsified butter and coconut oil was doing to our pipes.

Last I checked, no one ever had to move out of their apartment because green smoothies or fruit salad gummed up the pipes. This weighed substantially against BPC, in my book. Moving is such a drag, after all.

As Day Seven unfolded, I couldn’t wait for whole foods at breakfast again. I underestimated the meditative quality of preparing and enjoying a nourishing meal as a morning ritual. Starting the day with BPC felt as meditative as fueling up a car. Laser beam focus aside, I don’t expect bulletproof coffee to become a morning staple, but will certainly enjoy fueling up from time to time.

As Day Seven unfolded, I couldn’t wait for whole foods at breakfast again.

To be fair, BPC certainly has benefits worth evaluating. The increased mental focus and clarity are no joke, and they come without irritability, hypervigilance, or a discernible crash. Mine was a clear and focused energy. Like, whoa.

After a week, I know this much is true: In a world where deadlines loom and overscheduling runs amok, it’s tremendously comforting to remember that—when push comes to shove—there’s always bulletproof coffee to lend a hand in karate chopping your to-do list.

I am a yogi and seeker on the path of healing, service, and fearlessness. The quality of my own experiences... Read more