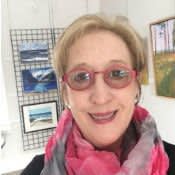 “Park in back of the church, go in the back door, and walk up three flights of stairs to the Southwest room. If you go to the South room, you will end up in the parlor with the bereavement group.” That’s what the brochure had said.

As I approached 50 and was looking for something to add meaning to my life, I thought maybe this yoga thing could be it. This class wasn’t in a gym, which appealed to my anti-workout nature. I found the door and the stairs, and I began my relationship with yoga and my teacher.

Ahead of me on the stairs, that first day, was a white-haired lady laden with tote bags and a yoga mat. She was humming and laughing as she grasped the handrail and limped up the stairs. ”Thank goodness I only paid for one 10-week session of yoga," I thought, "because if this is what the students look like I’m probably in the wrong class.” I followed her to the door, where about 15 students were gathered and waiting for class to begin.

“Muriel!” they all said at once, as they took her bags and mat. Everyone managed at once to move through the door, setting up class in a very large circle. Muriel went to the head of the circle, and I discovered to my surprise that she was the teacher—70 years old and wearing a circa '60-'70s black leotard.

That first evening, I was introduced to sitting quietly to focus my mind (meditation principles), warming up with mat exercises like cat and cow, the Tibetan rites (all five of them), seated forward bends, variations on seated twists, legs up the wall pose, bridge pose, and the cursed sitting cross-legged on the floor. Helpful lifestyle tips were interspersed among the poses (like starting the day off by drinking hot water, with honey and lemon, if you wish, to support healthy digestion, followed by meditation, as she taught that single-pointed focus was the perfect way to start the day! She even assigned reading material—Peter Kelder’s The Ancient Secrets of the Fountain of Youth and Baird T. Spalding’s Life and Teaching of the Masters of the Far East (all six volumes).

Throughout my years of study with her, I learned that Muriel had contracted polio when she was a young girl. She was confined to an iron bed for one year in an effort to "maintain her spine" while she was recovering. (The conventional treatment for polio in those days—the 1930s and ‘40s—was to place patients in an iron lung if they couldn't breathe, or an iron frame if they could breathe, as in Muriel’s case.) This was to hopefully keep their spines “straight” so as not to make things worse if they had complete paralysis from the polio). Polio did leave Muriel with some scoliosis, weakened lungs, and a weak and somewhat withered right leg. But Muriel was tough and determined, and she began her road to recovery and health by swimming. She was a strong swimmer and trained with the most elite in Toronto, but her competitive swimming was cut short when the pool water began to compromise her lungs and breathing. Her doctors demanded that she stop. She recalls that around that same time a nun she knew recommended she take up yoga for exercise and health maintenance. This was something she could do.

Though Muriel has forgotten the exact year she began practicing, as well as the names of her early teachers, she remembers that the direct benefits of the yoga practice were dramatic for her—and thus began her quest to learn more and more about the philosophy and practice of yoga. She fondly remembers that “back then,” yoga was typically introduced and taught by those who had come from India. Krishan Sidhu would become her teacher. Through him, Muriel began her yoga teacher training, which in those days took three years. Two to three times a year she traveled to The Geneva Centre, for a week each time, with weekend get-togethers and study in between. Each day of her training started with 12 rounds of sun salutation before breakfast. Everyone took turns cooking meals. Meditation was practiced in a barn-like setting (regardless of the weather). One year, due to a fall, she could not walk, and her classmates carried her around so she could participate in the course. When she graduated, she was given her “secret mantra” and the name Swami Mehram Devi Ji.

Though Muriel has forgotten the exact year she began practicing, as well as the names of her early teachers, she remembers that the direct benefits of the yoga practice were dramatic for her.

Over those years, she also traveled when possible to learn from great teachers.  Swami Rama and Swami Radha were two that she remembers as being authentic and having much to offer in their teachings, which were consistent with her yoga beliefs and training. She often referenced these teachers in class.

It is hard to see Muriel now in her “new” surroundings. Until two years ago, she defied the expectations of everyone around her and continued to live independently. However, sometimes the body just doesn’t cooperate, and it was medically necessary for her to move into a nursing home. For a while, she was too far away for me to visit regularly, but now she is living in a nursing home that’s closer to me, and our visits are more frequent. It was during one of those visits that I began to pose some questions to her:

What did your friends and family think of you when you embraced yoga so fully in your life? They thought I was crazy! At one point I had to move my metal pyramid [which she would sit under to meditate] from the living room to the basement so the kids could bring their friends home without having to explain.

However, I kept my focus and belief and participated greatly in the community and in the growth of yoga in Sarnia and Ontario. For many years, I wrote a weekly column on yoga for the local newspapers; had a weekly television yoga program on the local cable TV; taught yoga classes through Lambton College for 40 years; and taught two yoga teacher training courses sanctioned by FOYT (Federation of Ontario Yoga Teachers)* and certified by Lambton College. For many years I was on the Board for Sarnia Hydro Commission, and for a while wrote an environmental energy column for their news.

*(Note: As a staunch supporter of ensuring a standard for yoga teachers to achieve and maintain, Muriel was one of the founding members of the Federation of Ontario Yoga Teachers, which ensured high standards of practice. It has now become Yoga Network Canada.)

How have you seen society’s perception of yoga change over time? Yoga is a philosophy and a science, a way of living and thinking and treating others. It is a synthesis of breathing, moving, focusing, and directing energy and the mind to the “self”—the great “I am.”

You can’t teach yoga without acknowledging the spiritual, and not everyone wants to hear about the spiritual aspect of yoga—so that is your challenge. Today it seems that yoga is more of a “slimnastics” program, moving fast through the postures and often going well beyond the ability of the student. I hear from students that gyms often offer “yoga” classes, but the teachers are not trained. And certainly they do not have the understanding of the philosophy and science of yoga—the breath, the body, the understanding of self, and the importance of meditation and single-pointed focus.

How has yoga helped you survive and function well into your 80s? Well, I am in my 90th year and currently in a controlled environment (nursing home). Without yoga I would not have had the positive attitude, the mental and physical skills required to continue to move and think and continue on with life—given my polio and post-polio syndrome, and now my loss of independence. It is the philosophy and the science that have helped me continue to see a purpose in my life beyond my physical ability. 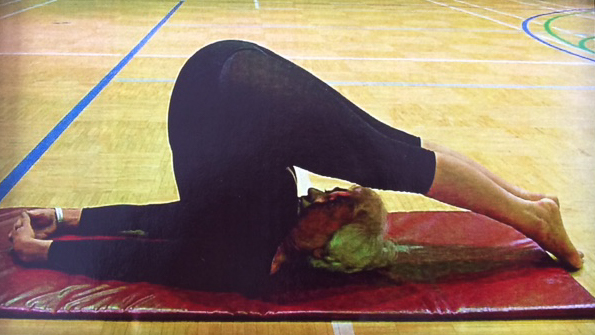 How lucky am I that I shake all the time. The shaking is a way for my body to be active since I can no longer be active in the conventional way. I meditate daily, am teaching (from my chair) two yoga classes a month to other residents in the nursing home, and at this time I am writing a book. Of course, I cannot physically write anymore, but I dictate to family and friends who are writing it all down. I feel a sort of urgency to complete the process, because who knows when the time to "graduate" will come.

In general, how has yoga changed and enriched your life? Today I think yoga has given me perspective on why I continue on. Perhaps I still have some lessons to learn—like patience and acceptance!

I truly believe that I would not have lived so long and so well without yoga—and of course my wonderful family.

It has greatly enriched my life by forming lasting friendships with many students in the field. The philosophy and science of yoga have contributed to my persistent pursuit of health and use of the body and mind in healing first, and then secondly as a complement to conventional medicine. I truly believe that I would not have lived so long and so well without yoga—and of course my wonderful family.

(As this visit comes to a conclusion, I ask Muriel if she has anything more she would like to add.) It is important for people to know that yoga is a way of approaching life. It is all about the breath, and remembering the breath in everything you do. The breath will be your guide and healer.

Finally, of the teachers and her peers with whom she studied, she remarks: They are all gone now, I am the only one left. I guess I still have lessons to learn. My job is not yet done.