Lotus pose—the posture of perfection and stability—awakens the infinite power of kundalini shakti, the source of enlightenment.

Sarasvati, the goddess of wisdom, creativity, and the fine arts, sits on a white lotus. Tara, the goddess of compassion, sits on a blue lotus. Lakshmi, the goddess of wealth, prosperity, and fulfillment, sits on a red lotus. Brahma, Buddha, Patanjali, Padmasambhava, Milarepa, and a long list of gods, goddesses, and adepts sit on lotuses. What’s more, all of them sit in padmasana—the lotus pose.

The ancient yogis equated chakras, the centers of energy and consciousness in the body, with lotuses. 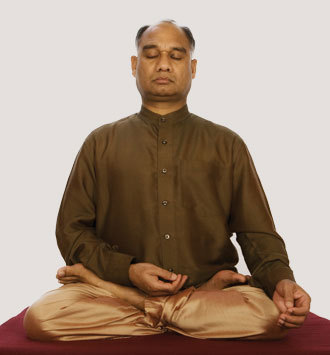 For thousands of years, wherever yoga went, the lotus traveled with it. In the 8th century ad, Kobo Daishi (popularly known as Kukai, the patron saint of Japan) had a vision that the peak of Mount Koya was an eight-petalled lotus (svayambhu mandala)—the purest, most natural form of a shrine. In the 1200 years that have passed, the mountain has been revered, and every year millions of Japanese seekers visit a sacred graveyard on Mount Koya to pay their homage to a statue of Kukai, who is depicted sitting on a lotus in lotus pose.

According to the Tibetan tradition, sitting in padmasana at the time of death is an undisputed sign of being the master of one’s body, breath, mind, and consciousness. A yogi who casts off his body while sitting in padmasana attains nirvana. Furthermore, those who help dying yogis sit in padmasana are also blessed with unmatched virtues. In the tradition of hatha yoga, padmasana is said to be the destroyer of all diseases—physical, mental, and spiritual—and the gateway to the primordial pool of the healing force. But before we delve into the mental, spiritual, and esoteric significance of padmasana, let us examine the pose itself.

Because we spend most of our time sitting on couches, chairs, or in cars, many of us eventually lose the natural flexibility and agility that allows us to sit comfortably in cross-legged poses like padmasana.

Padmasana requires unusual flexibility in the joints of the hips, knees, and ankles, and strength and flexibility in the lower back, pelvis, and thighs, particularly the inner thighs (adductors). Because we spend most of our time sitting on couches, chairs, or in cars, many of us eventually lose the natural flexibility and agility that allows us to sit comfortably in cross-legged poses like padmasana. As a result, blood flow to the joints is restricted, cartilage is starved of nutrients, and the overall health and vitality of our lower extremities decline. This decline is marked by stiffness and weakness in our knees, hips, and lower back—a common situation for most people blessed with modern-day comforts and conveniences.

The practice of padmasana can help us prevent this decline in flexibility and range of movement, and if practiced diligently, can reverse these problems. However, it is important not to create new problems for yourself as you attempt to practice padmasana. If you have injuries in the knee or hip joint, padmasana may not be the right pose for you. Assess the level of your flexibility and observe whether the problems lie in your knees, hip joints, or lower back. Be gentle with yourself.

It may help to massage the muscles of the legs before you begin working with padmasana. For example, if you have pain and stiffness in your knees, loosen the surrounding muscles by gently massaging the inner and outer thighs, around the kneecaps, and even the calf muscles and the muscles along your shinbones. Likewise, you can massage the upper thighs and buttocks if you have stiffness in the hip joints. General warm-up and stretching exercises like the sun salutation (surya namaskara) will help you prepare for padmasana. Then try the following four preparatory poses: 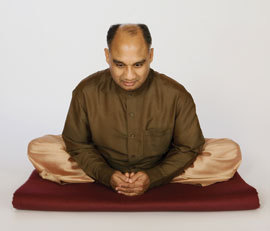 Baddha konasana (bound angle or butterfly pose) stretches the adductors and the lower back, and creates space deep inside the pelvis. The external rotation of the femur in the hip joint required and developed by this pose is also necessary for padmasana. Sit with the soles of the feet together near the pelvis and press the knees down into the floor. Hold the feet with the hands, and lean forward from the hip joints, drawing the pubic bone back between the thighs as you press the knees down and the sacrum forward. Lengthen the spine and draw the shoulder blades down. Keep the lower belly deeply engaged to draw the pelvis over the feet. The arms may press the legs toward the floor. 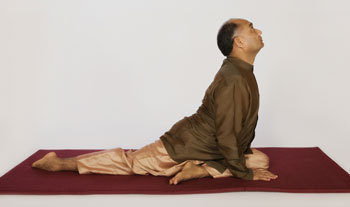 A variation of kapotasana (pigeon pose) is a classic preparation for padmasana. From downward dog, bring the right knee forward to rest the thigh on the floor with the right foot near the groin and the left leg straight out behind you. If the pelvis doesn’t rest square on the floor, prop the right side of the pelvis with a bolster or folded blanket. You will feel a stretch in the outer right hip. The stretch will intensify as you bring the right foot farther from the pelvis, opening up the knee joint. Fold forward over the leg to enhance the stretch. Another option is to twist to the right, supporting the torso on the forearms, to stretch the back of the left side of the pelvis and waist. Repeat on the left side. 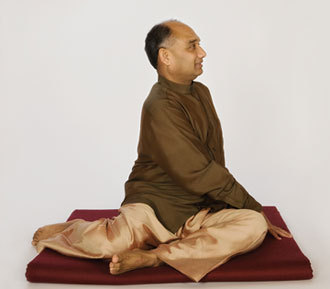 Modified bharadvajasana (the pose of Sage Bharadvaja) is a great stretch for the lower back and the deep muscles of the pelvis that allows the leg to release from the pelvis and rotate out in padmasana. Sit with the knees bent and the feet on the floor at least two feet apart. Exhale, drop the knees to the left, and twist as far left as you can, using the hands on the floor to help lift the spine up out of the pelvis. Inhale and twist back to the starting position. The position of the feet will not change. Exhale and repeat to the right. Move back and forth from side to side several times. 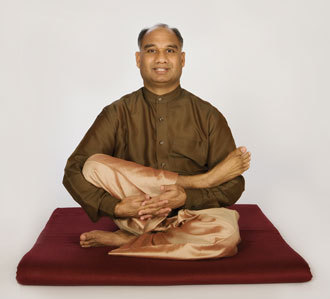 In seated leg cradles, the outer hip is stretched as the deep supportive muscles of the lumbar spine are engaged. Sitting cross-legged, pick up the right leg and place the foot in the bend of the left elbow. Be careful to keep the ankle neutral; don’t sickle or bend the foot. (Alternatively, hold the outer edge of the foot with the left hand.) Wrap the right arm around the outside of the leg to meet the left hand, or simply to hold the lower left leg. Draw the right leg toward the torso as you sit up as straight as possible. Try to bring the foot as close to the body as the knee. The leg is like a baby cradled in your arms. Gently rock from side to side and feel the stretch around the hip joint. Repeat on the other side.

To come into padmasana, sit cross-legged. With your hands, pick up the right leg as for a leg cradle and draw it toward the torso, bringing the heel down near the lower belly. Then place the foot on the root of the left thigh in the groin. Keep the ankle straight to avoid pinching and overstretching the ligaments of the ankle. The toes will extend beyond the leg, and the heel will be near the navel. Relax in the hip joint and thigh and allow the knee to release toward the floor. Just as with any asana, the rule of thumb is to stay within your capacity. Do not overdo, do not overstretch, and definitely do not force yourself to the point where you injure the soft tissues of the knee or hip.

Then pick up the left leg, and similarly place it on the right thigh. The heels will be close to the lower abdomen, and the thighs will rest fully on the floor, with the knees also on the floor. Stretch up from the pelvic floor through the crown of the head, relaxing the shoulders and lengthening the back of the neck. Soften the face. Rest the hands in your lap, palms facing upward (“Buddha-style”), or place your hands on your knees or thighs with the thumb and index finger gently touching. This position of the fingers and hand is called jnana mudra. In jnana mudra, the hands can be either palms up or palms down. Repeat the pose starting with the left leg.

These four preparatory asanas help us develop the ability to practice padmasana in its perfection, and that leads us to attain perfection itself, which includes freedom from all diseases—physical, mental, and spiritual. We attain inner stability. We acquire a clear, calm, and tranquil mind. We gain access to kundalini shakti—the primordial pool of energy and intelligence that in most cases lies dormant in the human body. The perfection gained by the practice of perfect padmasana includes gaining the ability to maintain our composure even during the most troubling situations in life. In short, perfection means that we rise above the “fight or flight” response, and become established in the state of equanimity that empowers us to discover the immortal and divine within us. This is possible, as the yoga scriptures say, by perfecting the practice of padmasana.

Perfection means that we rise above the “fight or flight” response, and become established in the state of equanimity that empowers us to discover the immortal and divine within us.

So what is perfect padmasana? As the Hatha Yoga Pradipika (1.44–49) states, after assuming padmasana as described above, an adept practitioner brings his hands behind his back and firmly holds his right and left toes with his right and left hands, respectively. While in that pose, he fixes his chin to the hollow of the throat, and gazes at the tip of his nose. This particular version of padmasana opens the floodgates of the healing force within, washing away the causes of all disease.

In another version of the perfect padmasana, an adept will keep her hands in her lap or on her knees in jnana mudra. She assumes jalandhara bandha by bringing her chin to the hollow of the throat, and she brings her mind to the lotus of the heart. By the power of pranayama, she lifts apana (the downward-moving pranic force) upward, toward her navel and above, and brings prana (the upward-moving pranic force) downward. Thus she creates an environment for jiva, the individual soul, to celebrate the wedding of prana and apana in the meeting ground of the lower and upper hemisphere—the heart. This leads to the awakening of the infinite power and intelligence—kundalini shakti—resulting in samadhi, or enlightenment.

Clearly, this advanced version of padmasana involves much more than sitting with your twisted legs placed on each other. The pose itself becomes a gateway for entering the subtle body, wherein lie the subtle mysteries of life.