Practice, Practice: How Yoga Helped Me Commit to Myself 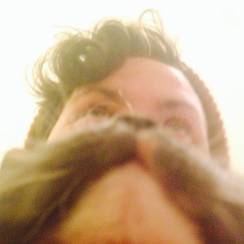 I lob my heavy limbs gracelessly around my yoga mat, sweating bullets onto the light brown tile. It’s become a tradition, of sorts, to turn to yoga—both the physical and the philosophical practice—when I need to work something out. But it wasn’t always this way. Yoga was an activity that I started as an aside some years ago, a careless addition to my vigorous exercise regimen.

I lob my heavy limbs gracelessly around my yoga mat, sweating bullets onto the light brown tile.

My first yoga mat was an awkward, pastel cyan that I bought for $14 at some department store with the intention of doing push-ups. It was thin. It was slippery. It was flimsy. But it did the trick. My first class was in a tiny, hardwood-floored studio in the North End of Halifax. I showed up with my pastel department-store mat wearing purple workout pants and a Kurt Cobain T-shirt, moody and pensive as any 19-year-old. And by the time I left, I felt completely great.

Maybe over the years the yoga did it to me, or perhaps the feeling predates my yoga habit, but for whatever reason, I seem to have a rather acute awareness of sensations: pains, tightnesses, and the general goings-on in my own body. This can be a real pain when there’s stormy weather and all of my joints ache, but during my yoga practice, it’s a pretty effective teacher.

When I first began, I rather noncommittally sprinkled yoga classes in with my other exercise pursuits, like kickboxing or boot camps. I was in my head a lot, and I was studying philosophy and busily engaged in overthinking. So, the high-velocity movement, and the getting punched in the stomach, and the 200 push-ups in a row followed by runs—that stuff all appealed to me because it got me out of my head. Yoga was this maybe-once-a-month activity that I was terrible at doing, and that made me feel great.

It was especially challenging because my first teacher taught slowly and patiently. He taught the kind of class where you held the poses for a good number of breaths. He would invite you to stay present, and breathe. And even when my overactive brain attacked me, I worked to focus my attention on my breath, and it helped quiet my mind. It was incredibly hard because it challenged my habit of distraction.

But seven years and one kickboxing-induced, chronic shoulder injury later, the only physical activity I can commit to with regularity is yoga. I commit to yoga because it is the only way that I know to calm my brain, loosen the knots in my stiff joints, and feel challenged enough to stay engaged, moment to moment and year to year.

When I say I’m committed, I don’t mean that I’m yoga-ing everyday, or that I’m especially good at it, or that I hop/skip/jump to my mat ready for yet another joy-filled practice. I mean that I keep coming back to it. I’ve done martial arts, dance, kickboxing, boot camps, and I've had a personal trainer. All of these have been great, but for a variety of reasons, I haven’t maintained them. And even though I’m still not so great at it, yoga feels like a sustainable practice.

When I get to my mat and I feel tired and lazy and I’m, like Slavoj Žižek, red-faced and dripping sweat all over the place, I sometimes experience this intense equilibrium. I find that my injured shoulder can relax, I can patiently work to stretch out my hips, I can hold a pose for several breaths, and I can allow myself a bit of peace.

I’m moving (at what seems like a glacial pace) into the type of practice that is more intuitive, introspective, and enjoyable.

Last year, while I was living and working in Bahir Dar, Ethiopia, I practiced almost every day. Building a home practice basically saved me as I struggled with the challenges of living far from home. It helped me notice my tendency to wrench my limbs into position and rather violently impose shapes on my body that it doesn’t particularly like. It compelled me to focus on being compassionate toward myself. Now I practice patience with my body, over and over and over again, and I continue to grow in that practice. And I’ve been working to forgive myself for damaging my shoulder so severely as to cause limited range of motion and chronic pain. That, too, is an ongoing practice—self-compassion. I’m moving (at what seems like a glacial pace) into the type of practice that is more intuitive, introspective, and enjoyable.

All these years later, I still show up to my mat in my raggedy Buffy T-shirt and, if I’m being honest, still often stuck inside my brain. But my focus has shifted from a practice reliant on force to a practice resting in intention—not on forcing my body to fit a preconceived notion of how a pose should look, or competing to be the best, the fastest, or the fittest, but rather on listening patiently, practicing mindfully, and most importantly, maintaining the practice.

*Slavoj Žižek is the name of a senior researcher at the Institute for Sociology and Philosophy, University of Ljubljana, Slovenia; Global Distinguished Professor of German at New York University; and international director of the Birkbeck Institute for the Humanities. An influential thinker who writes widely on a diverse range of topics, he achieved international recognition as a social theorist after the 1989 publication of his first book in English, The Sublime Object of Ideology, which disputed a Marxist interpretation of ideology as false consciousness and argued for ideology as an unconscious fantasy that structures reality. He apparently gets very passionate when he speaks.

Delaine is a lover of yoga, comics, feminism, and adjectives. Delaine lives in Halifax, NS, and primarily... Read more