Riding in the Car with Maggie: Life Lessons From a Shelter Dog 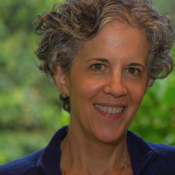 Recently, I wrote about how yoga is the glue that holds my world together. That wasn’t the whole truth. In the spirit of both full disclosure and satya (truthfulness), I should confess that my world these days is also held together by something—well, someone—else. She has four legs, no arms, and golden-brown fur. Her name is Sugar Magnolia, aka: Maggie.

We rescued each other in the summer of 2015 when, after discovering extended and repeated infidelities, I threw my husband of 11 years out of the house.

I was totally lost. I couldn’t eat or sleep. I could barely take care of myself, and yet it somehow made sense at the time that what I really needed was to take care of someone else.

So I started walking dogs at the local animal shelter. I walked and walked until my Achilles tendons more or less gave out. I was doing it as seva (service). But, of course, I was also hoping to meet a special canine someone—a loyal pal that I could walk all the way home.

I had wanted a dog for a long time. My husband had not. With him out and the children grown, our apartment seemed big and empty, quiet and clean. It didn’t feel right. Maggie knew just what to do, trashing it quickly and efficiently. A few weeks later, I dyed my hair purple and blue and bought pre-cut garlic. These were big steps. They would not have been approved under the previous regime. I was still a wreck, but I was starting to feel like a wreck under my own navigation.

But eventually (as these things often seem to go), my husband and I tried to reconcile. During those uncertain months, some of our happiest and most hopeful times were riding in the car with Maggie. Driving together, we seemed somehow immune from the past and the future. The three of us floated together in the eternal now. Suspended a foot above the earth, wheels rolling beneath us, there was no longer any question whether our destination was the same.

While at other times Maggie could be shy or uncertain, in the car she stood proudly—front paws between our seats, ears at attention, looking confidently at the road ahead. With absolutely no idea where we were going, she was definitely all for it. Occasionally she would glance at one of us. Often, the glance was followed by a kiss on the cheek. No judgment. No questions. Just love.

For a couple wrestling with profound differences, these rides were like a suspension of disbelief. Let go of doubt, skepticism, and fear. Let Maggie weave her spell. I knew that my husband hadn’t wanted Maggie, and he even objected to her presence when he first returned, so it was fun to watch her lure him in. Big round eyes and a wagging tail—she pretty much dares you to not engage with her.

But as I watched them interact, I decided that whoever coined the expression “Men are dogs” was wrong. Dogs have this purity. Maggie seems incapable of lying—not even to herself. Her thoughts, feelings, and physical nature are intricately bound.  What you see is what you get. No wonder so many people refer to their dogs as their gurus!

Had I finally found my teacher?

I asked a number of friends, super-spiritual dog people, for their thoughts on this topic. While I found many who supported the notion of dogs as the ultimate yogis, I heard some healthy skepticism too; a few protested along the lines of “Dogs are people too.” For example, dogs’ personalities are marked by their pasts, just as ours are. And their attention might be focused less in the present moment than we would like to believe. Consider, for example, the cartoon below: 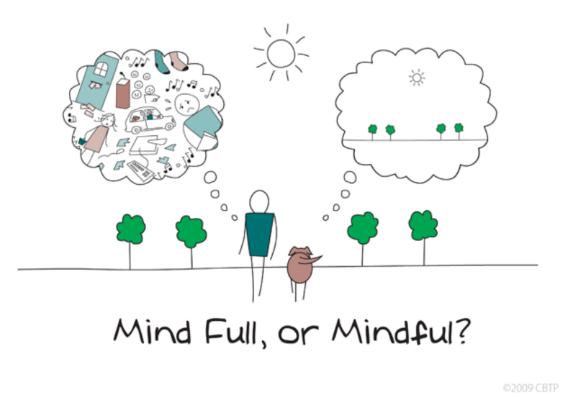 At first, it seems absolutely true.

Do you recognize the dog in the cartoon?

One blogger, commenting on this wonderful drawing, objected to the notion of an uber-mindful dog. She maintained that if there were a thought bubble over her dog’s head it would say something like: “Oooh, someone peed here! Who peed here? Can I pee here? Or over there? Yes, I’ll pee there! Wait, who peed here? What was that? WHAT WAS THAT?! Should I chase it? Will it chase me? Am I predator or prey? I can’t remember!!! Oooh, someone peed here!”

Furthermore, I’m guessing that her dog, and certainly my dog, are probably not recognizing the thoughts as thoughts….  So much for mindfulness!

But yogi or not, it is true that in some ways Maggie made my decision to separate from my husband harder. We had so much fun with her. She models forgiveness and manifests joy every single day. It is impressive. And inspiring. But just the way men aren’t dogs, women aren’t either. For better and for worse.

So in these strange days, as I navigate the surprising twist my path has taken, I have to work really hard to stay in the present. The complication, of course, is that in many ways, and for many creatures, it seems, the present is deeply infused with the past. For us humans, however, there is a possibility that, with awareness, we can begin to see the grimey and fertile soil from which our difficult emotions grow. And we can choose to stay with these emotions and allow them to blossom and bear whatever fruit they will. It is painful. But I’m finding that when I have the courage to stay—and to really feel—then I know what to do.

I’ll leave you with a little poem that I originally heard from Jack Kornfield, though it seems to exist in various versions all over the place.

Susan Kraft is an OM Yoga certified teacher at the 500 hour level. As a former dancer, she has also spent... Read more