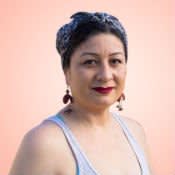 This is the second individual spotlight in of the “, a collaboration between the Yoga and Body Image Coalition and Yoga International based on the that launched in 2014 and their continued work in challenging stereotypes, growing community, working collaboratively, and highlighting the diversity of yoga practitioners and yoga practices, as well as their staunch commitment to diversifying yoga media.

Yoga has taught me how to surrender. But why would I surrender when I've been fighting so long? Fighting so many things that made me feel insufficient.

When I was five, we made our long-awaited trip from Mexico to Los Angeles to see the daddy I had not seen for two years. All I knew was that he was in the U.S., and that we were finally going to be together as a family again. The first thing I needed to do was to learn English. I was the oldest of five siblings and became the first to conquer the English language. Naturally, I would then have to translate everything for my mom, and to some degree for my dad.

I fought to fit in. We moved into our new home in South Los Angeles in 1985, and I would discover that it was a pretty rough neighborhood.

Since I could remember, my father was an alcoholic, and the situation grew worse in my teen years. Most of our family in the U.S. shunned us because he was a violent and annoying drunk. Fist fights ensued between my father and me, along with his emotional and mental abuse…well, that was in between the periods when he was incarcerated. I was all the while fighting to understand this disease of alcoholism.

At 14, I was molested by an uncle. I couldn't tell my dad—in fact, I couldn’t turn to anyone. I dropped out in the 11th grade, unable to concentrate on the simplest of studies. Eventually my father lost his job, and we lost our home and car. After two suicide attempts, I realized I was fighting to survive life. In 1994, I joined the Army Reserve in hopes of taking my mom and siblings away somewhere better than where we were—anywhere but South Los Angeles. Before I could sign on full time, I discovered that I was expecting my one and only child—a baby boy. But my fight still raged on in my mind. Now, more than ever, I felt that I had to succeed, as I was now doing it all for my family. Then 15 years later, after battling depression, anxiety, and weight gain with medication, something clicked—and I quit my stressful job.

I jumped from company to company for awhile—trying to find the right place, the right people, the right time—then suddenly discovered I had time to work out! I was off the meds, and my first yoga classes were so difficult (or so I thought). Also, I was not skinny, flexible, or strong, and the price for these classes was a bit out of reach for me. And I had to drive at least 30 minutes to the nearest studio.

After a year of practice, things began to come into focus. I saw that my community had been underserved and deprived of many things, and a yoga studio was one of them. Why didn’t I have a yoga studio near my home? Why were all the studios so far away? And why were they so expensive?

Then one day I walked into Green Tree Yoga and Meditation—a studio in my hood! Wow!! In my first class, I realized what yoga was truly about. I was excited to see a black male yogi! He was talking about making peace with all these crazy things that happen to us, rather than judging ourselves or others…and I surrendered. Suddenly I felt that I was enough. Surrendering did not mean I was giving up, but rather knowing and reaffirming that I was okay. The best part of this studio was seeing people of color in all shapes and sizes. And also that the more I practiced yoga, the clearer my feelings and thoughts became. All that physically strong stuff is really just a perk.

This practice has developed my awareness of the struggles of people in low income communities like mine, and how we live in an extraordinary time that calls for extraordinary measures.

Yoga is part of my life now, and I have learned that I am part of a huge awakening happening in my community. In my practice, I surrender often to my thoughts and my feelings, as well as to my mat. This helps me to help others.

We are not alone. We are as strong as we need to be. We are enough, and I have a heart full of love and an unbreakable spirit to prove it.

I now teach yoga in both Spanish and English to the people in my community, helping them to find their Zen. I like to call this the revolution to open our hearts and minds.