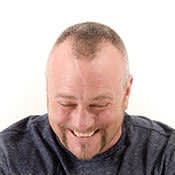 The  series is a collaboration between the Yoga and Body Image Coalition and Yoga International based on the YBIC campaign and their continued work in challenging stereotypes, growing community, working collaboratively, and highlighting the diversity of yoga practitioners and yoga practices.

From as young as I can remember, I hated myself. The violence at home only added confirmation that I was despised and disposable. The terror of the unpredictable violence was inextricable from the fear of knowing I was a boy but believing that to voice that truth would have been the last straw. The only way you can make sense of being beaten in a fit of rage as a little kid is to take it personally. The only power you have in those moments is to believe that it is happening because of something about you and if you could just change, it would stop. If I could just be a girl, if I could stop asking why, if I could stop embarrassing my parents, the violence would stop. But it never stopped.

I spent more than thirty-five years trying to die in all kinds of active and passive ways. I drank. I drank not to feel better, not to feel looser. I drank to die. One particular night, when I was hospitalized for alcohol poisoning, I was full of rage. Rage that I wasn’t dead yet. I had made a serious effort, having consumed thirty shots of vodka in four hours. That deep agony just called out to be held. If only someone had wrapped their arms around my teenage self and rocked me. Instead I got strapped to a bed and lectured by a priest on how in my queerness I was aiding the devil’s work.

My healing began in my early 20s when I entered twelve-step recovery. Somehow I could again hear that small voice that had spoken to me in childhood, that soft voice of the divine that told me I was loved and wanted, and this led me to seek a new spiritual path as a means of climbing out of the dark pit of despair that I had lived in for so long. From a grounding in twelve-step spirituality, I went on to find Buddhism. The idea of a spiritual practice rooted in compassion and kindness resonated deeply with me after a lifetime of isolation and anger. When yoga came into my life, it tied in with so many of the spiritual principles of Buddhism and twelve-step work that it felt familiar. And when I heard yogis such as Seane Corn talk about embodied activism, and also about light and shadow, I felt like they were speaking my language. These yogis came from dark places but didn’t hide that darkness, so when they said they were alive today because of yoga I could believe them.

The gift that gender transition offered me was the possibility that it could be safe to be physically present in my own body. What yoga offered me was an actual pathway to get there. Because of the way that trauma shows up for me in my body, my primary response is to freeze—I get locked down, I get numb, and I can’t think clearly. Physically, emotionally, and cognitively, I can’t move. Finding ways of being present, as someone who has all the reasons in the world to dissociate, was a huge task.

It didn’t have to be pretty, because my life wasn’t pretty. The idea that I could just breathe and move allowed me to start to unlock my frozenness.

By experiencing discomfort in small, manageable ways on the mat and learning to breathe through it, yoga offered me a practical skill to deal with dissociation. The reality is that painful feelings were happening all the time, but no one taught me how to live with them. When it was so intolerable to be in my body and be present, all yoga asked of me was to breathe and move. And so I would get profoundly uncomfortable and I didn’t have to make it okay. It didn’t have to be pretty, because my life wasn’t pretty. The idea that I could just breathe and move allowed me to start to unlock my frozenness. Until I started practicing yoga, I didn’t understand that the path to healing was that simple and that hard.

Learning to be fluid in my body through a vinyasa flow practice, learning to be compassionate and gentle with my body, is really my spiritual and physical edge. I know how to be strong, locked down, tight, physically powerful—but being physically powerful and emotionally present is something I don’t always know how to do. The physical unlocking of my body is still happening—my dense, knotted back muscles can attest to the fact that I’m not “unlocked,” just less locked down. But yoga and martial arts have helped my trauma-frozen self develop the ability to move and be fluid.

Over the years, my understanding of what it means to have a yoga practice has evolved, and my practice has included vinyasa flow, restorative practice, and the bhakti practice of chanting. There have been periods of physical wellness where I have enjoyed four-days-a-week vinyasa flow classes, and there are times where all I can manage is breathing in child’s pose. Living with AIDS means there are many times when my physical ability and my stamina are beyond my control. It’s in those moments that I’m grateful for the early lessons I received that taught me yoga was about landing physically, spiritually, and emotionally in the same place, on my mat. If all I can manage is child’s pose, that’s yoga. If bhakti chanting is where I’m at, that’s yoga. If it serves to open my heart and my mind and my spirit and allows me to be compassionate with myself and with the world around me, that’s yoga. I don’t know if I’m ever truly going to not be at war with myself on some level. But I do know that yoga never fails to help me negotiate a gentle truce.

This essay is an edited excerpt from “Yoga on the Margins” featured in Yoga & Body Image: 25 Personal Stories About Beauty, Bravery + Loving Your Body (ed. Klein and Guest-Jelley).

Teo Drake is a spiritual activist, an educator, a practicing Buddhist and yogi, and an artisan who works... Read more