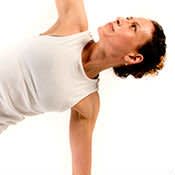 The series is a collaboration between the and Yoga International based on the and their continued work in challenging stereotypes, growing community, working collaboratively, and highlighting the diversity of yoga practitioners and yoga practices.

I first stepped onto a yoga mat in 2001, when I was a law student. This was before the explosion of yoga as the “new cool,” before I owned a pair of yoga pants, and before the emergence of what has been broadly described as a “movement” in contemplative law. In fact, I was already in my second year of law school when the Harvard Negotiation Law Review published “The Contemplative Lawyer: On the Potential Contributions of Mindfulness Meditation to Law Students, Lawyers, and Their Clients.”  All of this is to say that I did not practice yoga because it was endlessly touted on Instagram and Facebook—neither of which existed at the time—or ubiquitously present in other forms of media. Nor did I decide to practice yoga because I could not walk two blocks without seeing a yoga studio, which is now often the case where I live.

Instead, as a law student, and in particular one deeply immersed in public interest law and social change work, yoga was the space in which I could become more grounded. This made sense since every other experience during law school—in the classroom, in the legal clinic, and in the community—was about how much I could push myself to engage with my mind and disengage from my body. Though, I wonder if in hindsight I am giving more credit to my younger self. Did I really have a true understanding about the relationship between yoga and social justice work? It was not as if I had a daily practice, talked about yoga, wrote about yoga, taught about yoga, or led panels about yoga (all of which I do now), or that my friends and family even knew I was practicing yoga.

As a law student, and in particular,&NegativeMediumSpace; one deeply immersed in public interest law and social change work, yoga was the space in which I could become more grounded.

And at this same time, I was also highly influenced by the work of activist-scholars such as Gerald López, Lucie White, and many others who challenged the traditional notions of public interest practice by emphasizing connectivity between clients and lawyers. Even with that disclaimer, it is clear to me how my yoga practice made me think differently about how I moved in the world. With yoga, I was not only able to quiet my mind to the externalities of law school, but I was also able find the space to reflect more deliberately on my own experiences as a woman of color with systemic oppression and marginalization—the very experiences that catalyzed my decision to attend law school in the first place.

I do not mean "moving in the world" in a literal sense, but instead in a relational sense. In order for me to be present with the individuals I sought to work with and the communities I sought to work in, I needed to develop a heightened awareness of how my actions and reactions impacted others. This, of course, seems intuitive. A lawyer, in particular a public interest or social justice oriented one, should always consider how actual or perceived power and privilege can impact relationships with clients. This is especially true if one does not wish to replicate patterns of subordination or oppression. But law schools then, and sadly most now, teach lawyers to be disconnected from themselves, their clients, and the systems that they work in.

Fast-forward fourteen years. Like most practitioners, the expression and experience of my yoga practice has mirrored the ebb and flow of my life. After shattering my collarbone in a devastating cycling accident during the summer before my third year of law school, I stepped away from yoga for over a year. I returned to the mat as a young lawyer, and had to learn how to adapt to a new and different body. This led me to sample a range of yoga styles and approaches before finding the balance that worked best for me. It was both a physically and emotionally humbling time during which I had to accept my body as perfectly imperfect. And when I was finally able to see that I was in, and ultimately leave, an abusive relationship, yoga was a critical part of a larger process of reclaiming both my body and mind.

Today, I understand yoga as praxis present in all aspects of my life. It influences and sustains my work as an activist, my teaching as a professor, and my relationships with family and friends. Simply put, it continues to shape how I move in this world. I practice yoga for myself, but even more importantly, for others, as an act that speaks to collective liberation, to inclusive ways of interacting and connecting, and to disrupting patterns of oppression and subordination.

Thalia González is an activist, writer, and Associate Professor and Chair of the Politics Department... Read more