The 5 Prana Vayus in Yoga: Vyana 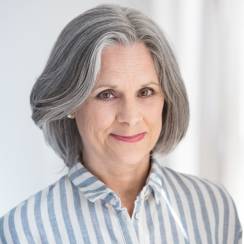 Vyana vayu, one of the five subdivisions of the life force, prana, empowers the distribution and communication systems of the body. It integrates and coordinates the other four prana vayus, keeping them balanced and nourished. A pervasive and expansive force, vyana governs the movement of prana through the nadis (energy channels); the movement of energy through the circulatory system and the nervous system; and the free flow of thoughts and feelings in the mind.

Vyana also controls the muscular system, coordinates balance, and regulates movement from the core to the periphery. While it permeates the entire body, vyana is particularly active in the limbs, helping them implement the powers of locomotion and manipulation—two of the five karmendriyas (or active senses). The expansive quality of vyana, with the help of apana vayu (the downward-moving force), grounds and anchors through the legs, and is especially perceptible in the arms, as reflected in their capacity to offer comfort and healing.

When vyana vayu is deranged, both body and mind become disintegrated and weakened, resulting in disjointed efforts, various physical maladies, and alienation and anxiety at the mental level. The practices of hatha yoga can maximize the functioning of all aspects of vyana vayu: distributing energy throughout the body; enlivening the physiological functions of the circulatory system, the lymph system, and the nervous system; and removing obstacles to the circulation of nutrition, energy, and information throughout the mind and body.

In asana, we can explore the nature of vyana in standing poses, which are particularly effective in integrating energy flow. Standing poses allow us to connect the various movements of the arms and legs with core strength, which is a key tool for developing focus, mental clarity, and expansion of consciousness. Properly done, standing poses help us cultivate grace and sensitivity.

In the following sequence, note how the standing poses expand energy through the limbs while connecting with the deeper awareness of the axial core energy channels, driving the mind inward.

With your hands on your hips, step back with one foot, keeping your hips facing forward as if your feet were on railroad tracks. Bend the front knee directly over the ankle and adjust the position of the back foot to allow the front thigh to drop toward parallel. Press down through the outer heel of the back foot and draw that hip forward as you firm the lower abdomen and lengthen through the tailbone. 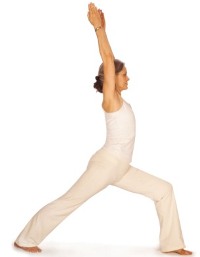 Extend up the front of the spine, and inhale the arms up alongside the ears, palms facing in. Draw the shoulder blades away from the neck and feel the arms lengthening from the strength of the legs and pelvis. Hold for five or more breaths.

With each inhalation, root both feet more firmly and completely into the floor, descend the pelvis, and lengthen the spine and arms. With each exhalation, fill the inner space created by the inhalation with awareness. Feel the energy exchange with the earth through the soles of the feet, and extend energy out through the fingertips.

When you are ready to come out, exhale and lower the arms; inhale and step the feet together. Take a moment to feel your renewed sense of strength. Then repeat the pose on the other side.

As a result of the enhancement of vyana and apana vayus, virabhadrasana is deeply integrating and empowering, making a warrior out of even the most timid of yogis.

Step one foot back with a slightly closer stance than for warrior I. Keeping your hips facing directly forward, bend the front knee over the ankle and stretch the arms up alongside the ears, palms facing each other. Exhale and tilt forward from the hip crease, bringing the torso over the front leg.

Then inhale and step onto the front foot as you straighten that leg, and lift the back leg straight behind you, parallel to the floor. Keep the hips level and facing the floor. Lift up off the standing leg by pressing the foot strongly into the floor; stretch back through the lifted leg, and roll the inner thigh toward the ceiling. 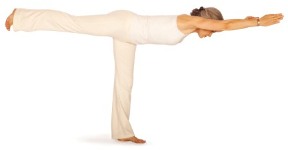 Hold for three to five breaths, or until you feel unstable. Then exhale and bend the standing-leg knee; inhale and lower the back foot to the floor in virabhadrasana I. Lower the arms and step the feet together; then repeat on the other side.

When both legs and the core are strong in this pose, there is a feeling of exhilarating lightness and grounded forward momentum, using the connection to the earth to expand into space.

Separate the feet about three to four feet apart and turn the left foot out 90 degrees and the right foot in slightly. Bend the left knee directly over the ankle, firm the inner thighs, and lengthen the tailbone toward the floor. Draw the right hip open, and press the outer right foot strongly into the floor. Extend the legs away from each other and keep the chest and pelvis square between the legs.

Inhale and stretch the arms to the sides, directly out from the shoulders. Broaden the collarbones, and draw the tips of the shoulder blades in and down the back. Reach out from the inner edges of the arms, and extend through the fingertips. To keep the arms from becoming rigid, soften the wrists and elbows, rotate the palms up, lengthen from the center of the chest, and then roll the forearms to face the palms down again, extending the energy of the heart center through the length of the arms and out through the fingers. Finally, turn the head and look over the left arm, softening the tops of the shoulders, with the right arm reaching strongly to the right. 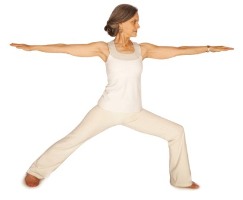 Let the strength of the pose come from the connection of the limbs to the reservoir of energy at the core of the body. Avoid hardening the jaw or eyes, and remember the arms are not weapons but rather an expression of the power of will and inner strength. Hold for five or more breaths, then exhale, straighten the left leg, lower the arms, and turn the feet to take the pose on the other side.

Come back to virabhadrasana II on the left side, step onto the left foot, fold from the crease of the hip over the thigh, and place the left fingertips on the floor 12 to 18 inches in front of the foot, or slightly to the outside edge of the foot.

Inhale, straighten the left leg and lift the right leg, stretching it up and out of the hip joint. Stay broad across the sacrum and shoulders as you square the pelvis and chest to the long side of the mat. Then reach the right arm toward the ceiling. Broaden the collarbones, draw the shoulder blades down the back, lengthen the neck and look down at the floor, or turn the chin over the shoulder and look up. 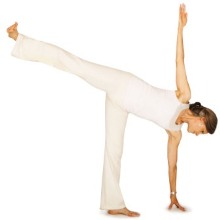 To release, bend the left knee as you lower the right foot to the floor and return to virabhadrasana II. Repeat the pose on the other side.

From tadasana, exhale, bend the knees and wrap the right leg around the left, hooking the right toes behind the left calf or ankle. Simultaneously, wrap the right arm over and around the left arm, bending the elbows and rotating the forearms to bring the palms together in front of the face. Draw the tailbone toward the floor, and keep the hips and shoulders square to the front.

Inhale and draw the elbows up to shoulder level. Exhale and squeeze the arms together, broadening between the shoulder blades. On your next exhalation, press down through the left foot; on the inhalation, lengthen the torso through the crown of the head. Hold for five or more breaths, then unwind with an inhalation, coming back to tadasana. Repeat on the other side.

This variation of garudasana, with the same side arm and leg wrapping, alternately pressurizes one complete side of the body, switching the dominant flow in the nadi system from one side to the other, and thus balancing and purifying the energy channels through which prana is distributed. If you hold the pose long enough and pay close attention, you’ll find the nostril dominance switching from nostril to nostril, reflecting the flow in the ida and pingala nadis.

Anuloma is an alternate nostril pranayama, which is cleansing to the body and purifying to the nadis, and thus important for work with vyana vayu. It is characterized by three breaths through one nostril, three resting breaths, then three breaths through the other nostril, followed by three more resting breaths. This practice is not appropriate if you have high blood pressure, congestion, or any conditions of the eyes or ears that are aggravated by increased pressure.

Start with a stable, comfortable sitting posture—either on a chair, or cross-legged on the floor. Prop the pelvis enough for the hips to be slightly higher than the knees. Use Vishnu mudra to close the nostrils: loosely fold the index and middle fingers of the right hand, and use the thumb to close the right nostril and the ring and little fingers to close the left. There are three steps in anuloma pranayama. 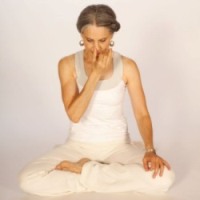 Step 1 Exhale vigorously through one nostril by contracting strongly in the navel. Then take a long, slow, deep inhalation through the same nostril. Repeat this twice more for a total of three breaths on one side. Then take three resting breaths, and repeat the sequence on the other side, finishing with three resting breaths. Feel the whole body, and just watch the breath slowly and gently expanding and releasing.