The Mythology Behind Setubandhasana (Bridge Pose)

“Constant repetition of the Names of the Lord (japa, smarana) is an easy means for crossing the ocean of mortal samsara or earthly existence.” —Swami Sivananda

In the great Indian epic Ramayana, Queen Sita is abducted by the demon king Ravana and held captive on the distant island of Lanka. Hanuman, the monkey superhero, uses his superpowers to leap over the sea and tell Sita that help is on the way; but he cannot conquer Lanka alone, and no one else can fly like him; therefore, Lord Rama and his animal army must build a bridge to rescue Sita.

“Bring stones!” ordered Rama, and all the bears and monkeys fell to uprooting giant boulders from the hills around the shore and pulled them out into the surf. But stone does not float, it sinks. The animals' hearts sank too as they watched their would-be bridge collapse into the waves.

Even today, the sea dividing the southeastern edge of Tamil Nadu, India, from the northern coast of Sri Lanka is known as Sethusamudram, “sea of the bridge."

Now, Hanuman was the leader of Rama's troop of bears and monkeys. And for him, Rama was the Lord personified. Hanuman was so in love with Rama that he would write his name over and over again, anywhere and everywhere. It is said that once Hanuman pulled open his own chest and “Rama” was plainly visible, inscribed on his heart. As he and the animals stood baffled by the shore and gazing with frustration at Lanka, Hanuman as usual wrote “Rama, Rama” with his finger in the sand, on the rocks... This habit of his led to a marvelous discovery: when he wrote “Rama” on the stones of the shore, the stones floated, buoyed by the power of that lovely name and by Hanuman's own love and faith. Quickly everyone began gathering stones and writing “Rama” on them. Almost before they knew it, a causeway stretched from the beach at India's southernmost tip across the sea to Lanka, wide and strong enough to bear the entire army. Even today, the sea dividing the southeastern edge of Tamil Nadu, India, from the northern coast of Sri Lanka is known as Sethusamudram, “sea of the bridge"; and it is spanned by a chain of coral reefs forming a land bridge, called Ramasetu, which links the two shores.

There are many versions of this pose, some active, others more supportive and restorative. It is both a mild backbend and an inversion; how you perform it and where you would sequence it in a class will depend to a great extent on whether you want to emphasize its energizing aspect as a backbend or its calming qualities as an inversion. Here, we look at an active version.

Lie on your back with your arms at your sides. Bend your knees and place the feet on the mat with their inner edges parallel and your heels in line with your sit-bones. Make sure your shins are vertical. Press down through the four corners of your feet (the roots of the big and little toes and the inner and outer heels). Grasp the edges of your mat and draw your shoulder blades toward each other to lift your sternum. Make sure there's some space between the back of your neck and the floor.

Still holding the mat, lift your pelvis. Elevate the center of your sacrum toward the ceiling and elongate your tailbone toward your knees. Still grasping hold of your mat, walk your shoulder blades closer together. Lift your breastbone toward your face. (If this causes the back of your neck to flatten toward the floor, lift your chin slightly away from your chest, and for a moment, press the back of your head into the mat; you should feel the neck spine moving up, preserving the cervical curve). Keep the lift in your chest and the space between the back of your neck and the floor as you let go of the mat and clasp your hands with the little fingers on the floor. Press your arms down into the floor from the tops of the shoulders through the outer wrists. Elongate your spine, as if you could slide your pelvis toward your knees and your chest toward your head, like beads on a string. Breathe quietly. If you can catch hold of your heels or ankles without compromising the vertical position of your shins, go ahead and grab hold. Grasp the front of your ankles (or use a strap) for the variation known as chatushpadasana, “four-foot pose." Draw your shoulder blades deep into your body to lift your sternum even more. “Stand” on the tops of your shoulders as if they were two more feet, balancing your weight between your "feet shoulders." Soften your tongue and your eyes. On an outbreath, release your hands and lower your pelvis to the floor. Take a breath or two and then repeat, changing the clasp of your hands. 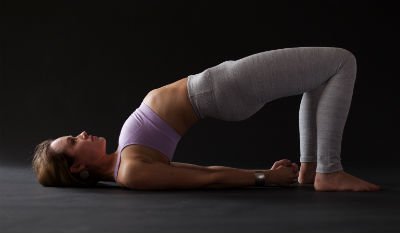 As you hold bridge pose, notice the two major curves that you've created in your body: the long curve from the tailbone to the head, and the curve across the chest. Feel your collarbones spreading like wings and your breastbone lifting and expanding. Energetically, let your heart be the highest point in your body. Breathe into your heart center. Finally, on an exhalation, come down.

Remember a time when your heart felt stony with grief, disappointment, or anger. What helped transform it? Reflect as you remain in this pose with your heart lifted and open and your breath easy: What name, what symbol, would be written on your heart to make it buoyant and strong enough to float?  For Hanuman, Rama's name was powerfully transformative. It allowed him to build a bridge, reuniting Rama with his beloved Sita. What has transformed you? What is your governing thought, your mantra? What helps you to reunite the divided parts of your self?

“All the existing traditions of the world use a syllable, a sound, a word or set of words, called a mantra, as a bridge for crossing the mire of delusion and reaching the other shore of life. Mantra setu is that practice which helps the meditator make the mind one-pointed and inward, then finally leads it to the center of consciousness, the deep recesses of eternal silence where peace, happiness, and bliss reside.”

Today, as you practice setubandhasana, say “Rama” in your mind and heart. What happens?

For Mahatma Gandhi, “Rama” was the name, the sound, that sustained his efforts toward liberation both for himself and for India. As everyone knows, he died with that name on his lips. The struggle for liberation continues in each of our lives; this is why we practice yoga. Today, as you practice setubandhasana, say “Rama” in your mind and heart. What happens?

My first teacher Sri Brahmananda Sarasvati called the Ramayana an allegory. Sita represents the mind, Rama is the soul, and Ravana is the ego. The mind and the soul get separated when the ego hijacks the mind. We must build a bridge, through our practice, to bring them back together.

The army which rescues Sita is composed of animals, instinctive creatures guided by their loyalty and devotion to Rama. Is your body in touch with the instinctive wisdom that links you to the divine source? In this story, the exiled intelligence is rescued through the work of the body, represented by the animals, and the breath, represented by Hanuman. (Hanuman's father is Vayu, the wind, making Hanuman the patron of pranayama.)

What unifying force or symbol helps you to integrate your efforts? Can you identify parts of yourself, your intelligence, that have been stolen and held captive by addicted or ego-driven behaviors?