The Mythology Behind Vimanasana (Airplane Pose)

In the Ramayana, the exiled Lord Rama and his wife, Sita, take refuge in the forest. They are living happily as hermits when the demon king of Lanka, Ravana, discovers them and abducts Sita, beginning a great war. Aided by a demon disguised as an enchanting golden deer, Ravana lured Rama away from the hut. Suspicious—he knew there were demons in the forest—Rama refused at first to go after the deer. But Sita begged him, “It’s so sweet! You know I never ask for anything, but it would be such a darling pet for me here in exile.” “All right,” said Rama, “but be safe! Don’t cross this threshold until I return.” And he set off uneasily.

They are living happily as hermits when the demon king of Lanka, Ravana, discovers them and abducts Sita, beginning a great war.

As soon as Rama was out of sight, Ravana appeared, standing shyly at the door in the shape of an aged holy beggar. Although Sita had been warned not to step one toe outside the door (which was protected by magical mantras), she was deceived by Ravana's innocent appearance. She crossed the threshold and fell into his trap.

At first he tried to flatter Sita. He admitted that he was no ascetic, but a king, so smitten by her beauty, that he had resorted to this ruse in order to be near her. He swore his love and offered her a prominent place in his harem. Sita, horrified, rejected his advances. Then Ravana bared his fangs, assumed his own horrific ten-­headed form, seized Sita in his ten arms, and hauled the screaming, struggling queen up into his vimana, his flying chariot, and zoomed away like an evil meteor streaking toward Lanka. 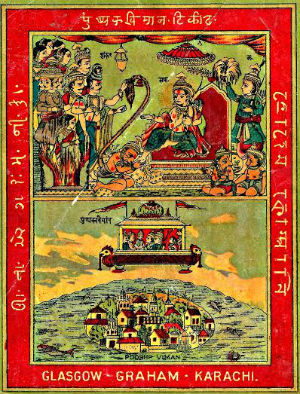 As they flew, Sita cried desperately to the trees, the birds, and the animals: “I am Sita, wife of Rama! Bear witness, brothers and sisters, children of my mother Earth! Tell Rama! Mark my trail!” And, one by one, she flung pieces of her jewelry over the edge of the vimana.

The Indian epics tantalizingly refer to these flying machines (vimanas), and unlike the classic horse-­drawn chariots that carried warriors into battle, these multi-storied constructions flew of their own accord, like birds. The most famous was the Pushpaka (“flowery”) vimana designed by the divine architect Vishvakarman for the god of wealth, Kubera, but coopted by Ravana.

The Indian epics tantalizingly refer to these flying machines (vimanas).

Pushpaka is said to have been two stories high, not unlike Lufthansa's super-modern A380 airbus. Its elegant exterior sheltered spacious, windowed rooms from which the occupants could view the scenery in comfort. It made a musical sound as it passed like a bright cloud through the sky. And its most special feature was this: no matter how many passengers it carried, there was always a vacant seat.

This asana imitates the shape of a flying machine. It resembles a high lunge or warrior I, but with the arms parallel to the floor.

On an exhale, bend your right knee. Look down and make sure your right shin is vertical. Bring your right thighbone parallel to the floor so that the knee forms a right angle (if your hips are tight, less of an angle is fine, but don't take your knee beyond your ankle).

Place your hands on your hips. Make your hips parallel to the front edge of your mat by moving your left hip forward and your right hip back.

On an inhale, lift your arms to shoulder height. Raise the fingers of both hands up toward the ceiling and extend out through the heels of both hands. Notice how this action “sets” the top of the arm bones securely in your shoulder sockets. Keeping that, bring the palms parallel to the floor again. Inhale to the center of your sternum; exhale, expand the space behind your heart as you lengthen from the inner edge of your shoulder blades out through the tips of the fingers. Keep your arms parallel to the floor.

Release the top of your buttocks down. Lengthen your tailbone toward the space between your feet. Reach back through your back heel.

Lift the crown of your head toward the ceiling. Keep your eyes and jaw soft.

Feel the solid earth under you.

To come out, lower your arms, straighten your front leg, and step your feet together. Repeat on the left side. Finally, stand equally on both feet. Feel the solid earth under you.

Since childhood I've had flying dreams. In the dream I run with long strides and my arms outstretched, until I root down through my legs, lift off the earth, and soar into the sky. I can control how high I go by raising or lowering my arms. I feel so happy and free!

When I got older and studied ayurveda, I learned that flying dreams can be a sign of overactive vata dosha. When your vata is excessive, you may feel temporarily energetic, but beware: a crash awaits you! Too much lightness and motion, as in air travel, is draining for vatas.

Jungian psychology says that flying dreams show a desire to transcend your limitations, to expand your consciousness. The downside to psychological inflation is it takes you “above your self” into arrogance, inviting a fall.

This is exactly what happens to Ravana in this story. His lust for Sita carries him away. His inflated ego insists that he can overpower Sita, her husband, and anyone else who would restrain him.

Sita, in her own way, is captured by desire too. She wants the golden deer and demands that Rama catch it for her. And her desire to help the supposed mendicant overrides Rama's instruction not to leave the hut. Following these desires, she loses her focus on Rama and “loses her ground” to Ravana.

Sita, in her own way, is captured by desire too.

Once Ravana seizes control, Sita cannot save herself, but she can and does call for help. She yells aloud that she has been taken and strategically drops items which can identify her and her route. Also notice that she throws her jewelry and identifying items to the earth—this is important. She does what she can to connect with the earth, to ground herself.

While the Ramayana and its events are widely accepted in India as historical, it is also a powerful teaching story. My childhood teacher Sri Brahmananda said that Sita represents mind, or individual consciousness; Rama represents Ishvara, or universal consciousness; and Ravana represents the obstacles to one­pointedness, or the ego; with his ten heads and ten arms symbolizing the claims of the senses. Consciousness and Ishvara should always be united. When ego, or desire for sense objects, takes over, the mind gets separated from Ishvara and carried away in a fantasy, symbolized by Pushpaka, the luxury vehicle. Flying off in Pushpaka means letting your thoughts and ego run rampant. “I will do this, I will have that, I will be rich, successful, envied...” There is always room for one more seat in Pushpaka, just as there is no end to uncontrolled thoughts.

When ego, or desire for sense objects, takes over, the mind gets separated from Ishvara and carried away in a fantasy, symbolized by Pushpaka, the luxury vehicle.

Patanjali's list of obstacles (Yoga Sutra 1:30-1:32) includes carelessness, inability to withdraw from sense cravings, confused understanding, and mental distractions. Which of these do you see at work in this story? In your story? Can you recall a time when you were swept off your feet by a person, a train of thought, or a set of circumstances which appeared compelling but proved to

be false and dangerous? Has a “golden deer” appeared in your life, too beautiful to be real but too attractive to ignore? Do you ever catch yourself engaging in addictive thinking or behavior? Of course you do; we all do. What helps “bring you back to earth”?

(Don't worry! This story of Pushpaka and Sita's abduction happens early in the tale. Later on, Hanuman comes to the rescue, representing the value of physical practice as a vehicle for “rescuing” the distracted mind and restoring its unity with the spirit. But that is another story...)