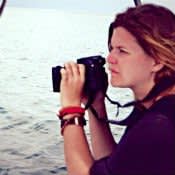 The five of us sat around a table in the quarters behind the kitchen—not fancy digs, just a humble place where volunteers shared meals every evening. Music dim on our little speakers, a few stray candles lit, bug spray bottles lying about. We drank cheap wine out of a box. Some nights we played Scattergories, painted henna tattoos, and watched videos huddled around a laptop. In our little corner of the world (Costa Rica's remote Osa Peninsula) we had great fun.

One particular evening we had a shake-up, when somebody suggested the game “Never Have I Ever” for our after-dinner entertainment.

One particular evening we had a shake-up, when somebody suggested the game “Never Have I Ever” for our after-dinner entertainment. If you're unfamiliar, this straightforward game jumps person to person as they name something they’ve never done. Those who’ve performed said act or lived said event each raise a finger, until one person’s hand is totally up, deeming them most "experienced" of the bunch.

This bunch—my volunteer friends at Blue Osa Yoga Retreat in Costa Rica—I think about them all the time, write about them often. I love them. I could gush and gush and still I’d never quantify their uniqueness. But as the game progressed, something became clear. I sat dormant as one by one everyone owned up to a vibrant palate of experiences, some I considered slightly off-color. And never have I ever done, well, much of any of this.

My history just wasn’t on a par with the thrilling pasts of this free-spirited group. This revelation was not shocking to anybody. They’d heard it a thousand times. Mention an activity or day-to-day deed—it doesn’t even have to be wild—and I chime in “I’ve never done that before.” I’ve said this more in the last eight months than my other 29 years and four-something months combined.

The game lends itself to the raunchy and crazy, outing everyone’s dirt. But I’ve never experimented with hard drugs, or tantric sex, or even a child’s chemistry set. No PDA, no fights, no streaking.

In fact, this crowd’s everyday activities were more brazen than even my most outlandish. One friend led a class called "contact dance." The whole point of the movement is for people to touch one another. No thank you. I’ll stick with the communal shoulder shrug if I’m on the dance floor (which I avoid to begin with). Sex on a plane? Forget it. My in-flight modus operandi is put earbuds in, tune world out, and pray my most intimate personal encounter is with the flight attendant asking if I want pretzels.

So the only thing in the whole game I could confess was hardly epic. My friend sarcastically stated: “Never have I ever enjoyed a hard-boiled egg.” I raised a solitary index finger.

On the spectrum of outrageousness, I was most tame, my role the bashful, prudent klutz who has…just…never done anything. My hands, which didn’t see much action in the game that night, represented my life, which hasn’t seen much action either.

Descriptors of my personality often start with the prefix “un.” The unnatural woman. The unbalanced underdog. Faithfully modest through her twenties, Leah basically put the "un" in nun.

I’d dominate the game if weird anecdotes were the topic on hand. There are plenty of acts of ridiculousness I’m stupefied to have lived. Yes, I did really choke a dolphin. I sustained minor injuries from jogging into a hot dog cart. I struggled in a kayak for over an hour before I realized I was sitting in it backwards.

I stuffed my bra once—only to have the padding spill all over the floor as I bent to take off a shoe at an airport security check. “You dropped your…things,” the stoic TSA guard indicated as I scrambled, horrified, grabbing tissue and shoulder pads off the floor. Yet another painful pubescent embarrassment—except that was only about six months ago.

But as I looked at the circle of beautiful people around me—exotic friends who had a monthly rite of running naked on the beach while howling at the full moon (such a thrill!). Their spicy backgrounds gave them power; they seemed so free. But exciting as they were, they weren’t boastful, but rather, graceful and gracious. They welcomed me, nudging me out of stagnation at a compassionate speed. And I’ve made progress toward letting my hair down a bit, or at least trying new things.With their help during the last year I’ve collected experiences as if they were charms or talismans.

While most people’s bucket list items are adventuresome, mine, for the most part, are uncomplicated, attainable things that slipped through the cracks of my life. Roasting a hot dog over a fire seems an easy enough task, but I had a lot of questions when I did it the first time (just months ago). Do I rotate the stick? Is this even a good stick to use? How do I know when it’s fully cooked? Botulism is a real thing, right?

I chalk up a lot of this inexperience to being unsure about things. My tribe of friends were generous with instruction. From advice on being single, to rudimentary flirting—something I knew nothing about. One friend gave me an easy formula to follow: Step one, eye contact. Step two, smile. Step three, break the touch barrier. A non-threatening first try was with my friend Taylor, who looked genuinely freaked out as I approached with wide eyes and a forced, deranged smile before punching her square in the collarbone.

Many things I’ve never done aren’t for lack of opportunity, but lack of guts.

The longer we spent in Never-Have-I-Everland, the more internal I went. Music hummed in the background through the modest speakers, but I couldn’t hear it above the din in my head. My brain was abuzz with questions and analysis. I made it this far into my life all thumbs, so unimpeachable. It was embarrassing how stunted I felt. My upbringing wasn’t puritanical; my parents are a hoot. When and how had I become so underdeveloped?

Many things I’ve never done aren’t for lack of opportunity, but lack of guts. I’ve let myself be held back by fear, anxiety, or crippling self-doubt. A debilitating phobia of snakes kept me out of nature my whole life—and when I say “nature,” I mean I wouldn’t walk through my front yard if it could be avoided. Too uneasy.

But the more time I’ve had to think about how I was differently cultivated, the more I honor my past. My hot dogs may have been cooked in the less rustic microwave, but there was no deficit in my upbringing. Music was the cornerstone on which I built a future. I spent my life at a piano, practicing and composing for years. That diligence landed me in a prestigious conservatory. My college friends and peers today are some of the most virtuosic musicians on the world stage.

Never have I ever played beer pong or sipped from a red Dixie cup as bass from the Sigma Chi fraternity stereo shook the whole neighborhood. Instead, I was often annoyed at my college roommate for practicing drumming and shaking our apartment while I tried to watch reruns of "Golden Girls." Now he’s a percussionist in the New York Philharmonic. In hindsight, his early house-thumping was a privilege to have experienced.

I wasn’t as well-rounded as a merit-badged Girl Scout, but I was doing what I was called to do. I’ve stepped up to a podium to conduct a concert that took months of passionate preparation—culling musical phrases from string players and singers. Hearing this come to life, with lights beaming down on me and hundreds of people in the audience—now that’s my kind of thrill.

I had the trump hand at one glaringly obvious life event—marriage. These friends sought true connection, but none of them had taken vows, especially at young ages, as I had. Never had they ever been a wife in a monogamous relationship for a third of their life. That was my experience alone, one that likely curbed a few more capricious happenings.

My adulthood hasn’t included unpredictable, whirlwind romances with strangers. It was the predictable I loved—the rustle of plastic bags filled with groceries, the excited scuttle of paws on wood floors as pups greeted us at the door, my husband’s voice humming Bach, the crackle of bacon grease in the pan. I’d never have those moments again, since now I was the unmarried. My divorce almost broke me. It still feels unreal—the one experience I’d give anything to un-live.

As we played on through the evening, my friends’ hands were raised, but their lives weren’t just fodder for a racy game. These friends have their own profound histories, heartbreaks, and stories. And my heart is full whenever they share them with me, especially when I can relate, or understand. Everyone has their real, raw, special-to-me-and-only-me life moments.

I lost the game that evening, but that’s irrelevant because I’m playing at my own life.

One such moment, special to me, and only me, was the day I sat in a quaint, old kitchen with thinly-papered walls, sifting through a bowl of Hershey’s Kisses, enthralled by my great-grandmother, age 103. She spoke into my sister’s pregnant belly. “Say something, G-Mom, the baby can hear you.” To her unborn great-great-grandchild, G-Mom excitedly exclaimed “Hey, Darlin!” in a perfect, prissy Southern inflection. From across the table, I watched in amazement at purity and love personified—a moment most powerful and unbelievable. Remember this, Leah. Burn this into your brain right now. Right now, with urgency. Keep this experience forever.

Maybe “un” isn’t a setback, but the beginning of my particular universe. I lost the game that evening, but that’s irrelevant because I’m playing at my own life. Right now it’s rife with firsts. Both exhilarating and terrifying to the hand I’ve dealt myself so far. But as things start to occur for me, at this age, I understand the value and don’t take experience for granted. One day I will kiss somebody new. I’ll go to my first football game and cheer from the stands. I’ll watch The Godfather, and I’ll enjoy deviled eggs whenever I want. Why be the unsatisfied?

In our little back room, my friends laughed at my unassuming finger, but encouraged me to be unashamed. I doubt I’ll ever be truly rowdy, but this group would tell me never to rule anything out. I could bring my own unquantifiable, unique life to this table. I suggested we pull Scattergories off the shelf—it’s more my speed. Maybe in this game, they’d be the ones learning something from me (because I win every damn time). Never had I ever been more thankful. That was one experience to be forever unforgettable.

When photographer/writer Leah Wyman found herself in the midst of a quarter-life crisis, she left her... Read more