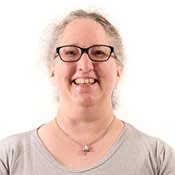 The series is a collaboration between the Yoga and Body Image Coalition and Yoga International based on the YBIC campaign and their continued work in challenging stereotypes, growing community, working collaboratively, and highlighting the diversity of yoga practitioners and yoga practices.

I never had any interest in trying yoga. I had accepted the mainstream media depiction of who could practice asana, and I was not even close to a match. I’m not young and pretty, I am not very flexible, and I weigh at least half again as much as your average magazine cover yogi.

But in late 2009, I attended a series of health-related lectures at an integrative health clinic, and one of the speakers was Hala Khouri, my first—and still favorite—yoga teacher. During her lecture, she instructed us to sit in a gentle hip opener. Then she asked us what feelings came up for us, and if we noticed anything about our strategies for avoiding discomfort. I had never before been exposed to the concept of being present and curious about the connection between thought, emotion, and physical sensation, and I found it scary but fascinating. In a few short minutes Hala opened my eyes to a deeper aspect of the practice, and I felt immediately safe in her presence. She offered us all a guest pass for her classes, so that weekend I went—though I was incredibly nervous and almost talked myself out of going. That class was the first time in my life that I’d been given permission in an “exercise” class to care for myself and not to worry about keeping up, proving myself, or achieving anything. I’ve been dedicated to the practice ever since that first class six years ago.

A few months after I began my practice, I was diagnosed with a chronic illness that has changed my life in almost every way imaginable. Even more than before, I became the antithesis of the popular concept of a yogi. But my practice is much deeper and more meaningful to me than it could possibly have been without the challenge of illness. Although I can’t do a headstand, I feel grounded and present most of the time. While I never would have wished for illness, I do recognize that there is much I can learn from it. Being able to acknowledge the complexity and hold the devastation, uncertainty, and pain—along with the unique opportunities for growth and insight—is something I learned from asana and meditation. It scares me to imagine how I might have dealt with this planet-sized curveball had I not had my yoga practice as a framework for navigating it.

I especially notice how invisible I am to many “mainstream” yogis, and how often the assumption is made, by other students and teachers alike, that I am brand new to the practice—or that I must not be “doing it right."

So it was frustrating and demoralizing when the honeymoon ended and I realized that not all yoga teachers prioritize authenticity and dedication to rigorous self-inquiry, which is the foundation for practice in the community where I discovered yoga. About two years into my practice I participated in a few Facebook discussions about the dangers of unethical and predatory teachers, and I insisted that others were exaggerating about the dangers. But it finally sank in: I had been very fortunate, initially landing as I did among a group of yogis I had erroneously assumed were representative of the larger Western yoga world. As I branched out and began attending classes at other studios, with teachers I didn’t know, I began to notice the many subtle ways in which most studios cater primarily to the affluent, prioritizing the appearance of glossy, stylized perfection over individual authentic practice. I do not feel welcome in most yoga classes; I have to choose carefully. I especially notice how invisible I am to many “mainstream” yogis, and how often the assumption is made, by other students and teachers alike, that I am brand new to the practice—or that I must not be “doing it right,” because if I were, I would be healthier (i.e., thinner and younger looking) and happier.

Truth be told, my practice does have much room for improvement. Consistent practice is a constant struggle for me. But what is consistent is my mindset—the awareness and dedication to the mental/emotional presence that keeps me (mostly) on track in the face of a number of very imposing challenges. I am not happy, or confident, or trusting life all the time. But I have an underlying emotional sturdiness and resilience that I never had before, even when my life may have seemed much more stable and predictable. I have learned to accept each moment and see it as it is, rather than as I wish it to be. So I am utterly grateful for the teachers and fellow practitioners who have helped me find my path.

This newfound resilience has allowed me to return my focus to my passion: social justice activism. I abandoned it in my mid-twenties—demoralized and burned out—but now have the tools to return to it thirty years later. Over the past few years I have become increasingly active in several communities that focus on the intersection of yoga and social justice. While my illness prevents me from participating in all the ways I would like to, I have found ways to engage that are sustainable for me. I don’t stand on picket lines or organize and march in protests as I did when I was younger. But I have discovered that I have a voice. According to mentors and colleagues, and much to my surprise, I am able to speak in a manner that is unique and illuminating. And the willingness to sit with discomfort and continue compassionate dialog when disagreement and misunderstanding become emotionally loaded is a much-needed service. Learning to trust the feedback from others that tells me this is a rare and valuable ability has given me the courage to be visible and vocal for both myself and others who do not have a voice.

A little over a year ago, I also began teaching a weekly meditation class for a local nonprofit that offers resources and information for preventative and alternative health care to those who would not otherwise have access to it. I consider it an honor and a gift to teach this class, holding space for others with chronic health challenges to learn the benefits of the practice that has been invaluable to me.

So my practice has given me the emotional awareness, courage, and compassion required to be an effective ally. Although my illness limits the types of activism that are sustainable for me, I am increasingly able to recognize and have confidence in the ways that I can be of service. And that is a true gift for which I am eternally grateful.

Laura Sharkey has been practicing yoga since late 2009. About a year and a half ago, she completed a... Read more