When someone begins a yoga practice, they never truly know where it will take them. Onto the mat, surely, but the beauty of yoga is that as it opens us more to ourselves, it also often opens us more to others. It may even motivate us to reach into our communities and serve them.

Victoria Marie, the founder of Indigenous Lotus, an organization dedicated to helping indigenous people “self-heal through mind-body connection,” is one of those yogis. In our conversation below, she provides a glimpse into Indigenous Lotus, the community it serves, and what drew her to the specific work she does. She also addresses the cultural appropriation in yoga spaces, which has, in many ways, co-opted indigenous culture. 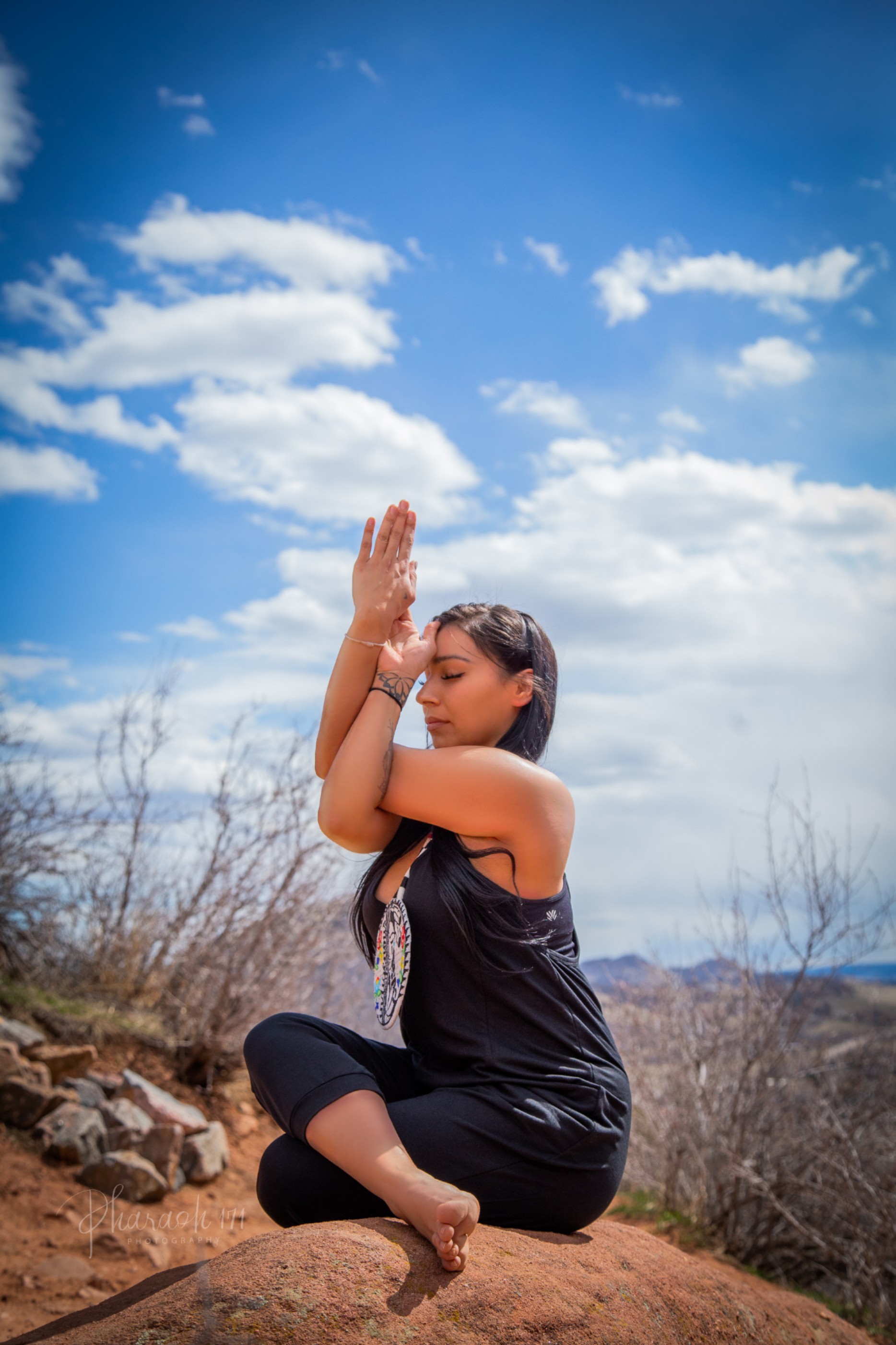 Victoria Marie in a variation of eagle pose.

I read that you started practicing yoga as a teenager. What was your initial experience like?

I first came across the practice in 2005 through meditation practice. I was 17 at the time and just had my son. I had grown up in a HUD [U.S. Department of Housing and Urban Development] subsidy my entire life, had just lost my mom at 15, and was a runaway. I decided to drop out of high school since I was having such a difficult time with my life. I decided to go to the local library since I wasn’t in school, and there began my journey to self-heal. I found a few meditation books and decided to explore further. About the third book in, there was the mention of yoga. I had never heard of yoga before, but I was already physically active, so I thought, I could try this. I then began practicing a few times a week, making it a routine.

And now you're not only a certified instructor and Yoga of 12-Step Recovery leader, but also the founder of Indigenous Lotus. Please tell us more about this organization: about your community, teachers, the style(s) of yoga you offer, and your clothing brand.

I come from the Little Earth of United Tribes community located in south Minneapolis, Minn. The community was founded in 1975 and is the only project-based Section 8 rental assistance community in the country with an American Indian preference. In our community and nationwide, there is not only the beauty of culture and tradition, there are struggles of addiction, abuse, violence, family displacement, and homelessness.

My “teachers” in the community were our children and the parents/grandparents, who were resilient. I admired their strength and was motivated to stay on my healing journey. The idea of Indigenous Lotus began in 2015. I realized the one area that was so heavily ignored when we approached healing our indigenous communities was movement. I decided to pursue a 200-hour teacher training in vinyasa yoga. The styles of yoga I currently offer are vinyasa, Ashtanga, and hatha variations. My clothing brand is a collective of my own artwork. I use the main self-image as the staple of my artwork as it reflects my own experiences.

I also read that your work involves serving underserved youth. What programs do you offer them and what are your overarching goals?

I began working with youth in the Little Earth community in 2010. My work included direct contact and program planning. This work wasn't initially yoga related at all, but I began to teach youth movement practices before leaving the organizations I was working for. My passion grew as I continued to work with youth, realizing we had similar stories and backgrounds of growing up.

Indigenous Lotus yoga classes actually began with a yoga pilot program for youth in the Little Earth of United Tribes community. The pilot program was funded by a grant I was awarded in 2017. Prior to COVID-19, Indigenous Lotus held free classes in the communities for all ages and partnered with local schools. Currently, Indigenous Lotus is in the stage of restructure as we contract additional indigenous instructors and grow our team. This month [October 2020] we begin our weekly classes, all of which are donation-based. These classes will include Y12SR [Yoga of 12-Step Recovery] for teens and yoga for kids. Our goal is to open a studio located within blocks of the Little Earth community to allow for easy access, requiring minimal transportation, as well as continued partnership with the Native American Community Clinic and Indian Health Board of Minneapolis to address any mental health concerns.

I have never owned a studio. All my work is done in partnerships or collaborations. Or I would simply ask to use space at local indigenous organizations, such as the Minneapolis American Indian Center and the Little Earth youth center.

We are having an important conversation on race right now in the United States, and it's no secret that for years the issue of cultural appropriation has been rampant in the yoga world. What are some ways that yoga teachers and practitioners co-opt indigenous culture through their languaging and actions in class and outside of class? What do you want those teachers to know?

Here we have two highly appropriated sacred practices, those of yoga and indigenous culture, which have become intertwined. The words tribe and savage, dream catchers, tepee, sage, and the word namaste, for example, are inappropriately and incorrectly used all the time.

This appropriation is by predominantly non-indigenous people defining their own spirituality and those with a lack of awareness of their own roots and culture. I would suggest to anyone who is inappropriately using these references, even unknowingly, to just take the time to educate themselves about what these practices are and where they come from and have respect for them, find an alternative or become educated enough to be able to explain their importance. For example, by donating to those communities and cultures. Invite those from the cultures to come to class and speak. And when you see cultural appropriation, say something, speak up even to just bring awareness to the fact that it’s not okay.

What makes yoga "yoga" to you? What is the special ingredient in this practice that you find to be most healing and beneficial for those you serve?

To me yoga is awareness. It is about being aware of my surroundings, my body and my emotions, and allowing myself to feel. I had struggled most of my life trying to escape my body, and I found this practice had allowed me to address and release the trauma I had been storing for so many years and gave myself permission to heal.

Is there anything else you'd like to share with us, or specifically with indigenous readers and practitioners?

For those teaching, be conscious of your students, your words, and be inclusive. For those interested in mind-body practices, just know that anyone can practice movement. If you can breathe you can practice. And then learn where these practices come from and respect that because it is all sacred.