Which Way Should You Tilt Your Pelvis in Backbends & Folds?

In different yoga classes, you might receive different instructions as to which way to tilt the pelvis when backbending and forward folding. Should the pelvis be tipped posteriorly (backward) in these poses, or anteriorly (forward)? And why?

Bill Reif, a yoga practitioner, a physical therapist with nearly forty years of experience, and the author of The Back Pain Secret: The Real Cause of Women’s Back Pain and How to Treat It, often emphasizes controlled pelvic mobility for his patients with back pain. Below, Reif weighs in on which way to tilt the pelvis in backbends and forward folds, and why these tilts are important.

1. For all students, in all backbends, the pelvis must be in an anterior pelvic tilt.

“When we backbend,” says Reif, “the correct method is to maintain a slight anterior tilt and a gentle curve of the lumbar (lower) spine.”

When coming into a backbend like bridge, for example, students should tip the tailbone down into the mat until the lower back curves gently away from the mat; then lift, keeping the anterior pelvic tilt and the lumbar curve.

“'Flattening your lower back to the mat,’ ‘gluing your back to the mat,’ or ‘tucking the tailbone’—cues often given with the intention of protecting the back in backbends like bridge—are not beneficial to the function of the spine,” Reif tells us.

Why? “In a backbend, you get support mostly from the transverse abdominal muscle (TrA) and the multifidi,” he says. “Tucking the tailbone under to scoop the pelvis and flatten the lower back detracts from your ability to use these core muscles. You activate the gluteal muscles, hamstrings, and hip rotators instead, and the multifidus and TrA muscles can’t activate.”

According to Reif, if your goal is to protect the back, you do that most effectively by fostering core engagement. Rather than “tucking your tailbone,” try applying this cue in bridge, or in any backbend:

"Pull an imaginary drawstring around your waist tighter on the exhale. As you draw the string inward, you might notice the frontal hip bones lifting slightly toward the lowest front ribs. Doing this allows the deep abdominal muscles, the TrA, and the deep muscles along the spine (lumbar multifidus) to work together to create a balance in the spine. This in turn gives stability to your backbend.”

For added core engagement and back protection during backbends Reif advises that students squeeze a yoga block or a 6-inch ball between the thighs (or imagine squeezing such a block or ball), while keeping the pelvis in a slight anterior tilt), and then focus on the drawstring action around the waist. He explains that “Engaging the inner thighs with a gentle squeeze, and then the belly muscles, helps develop an internal corset around the otherwise vulnerable spine.” 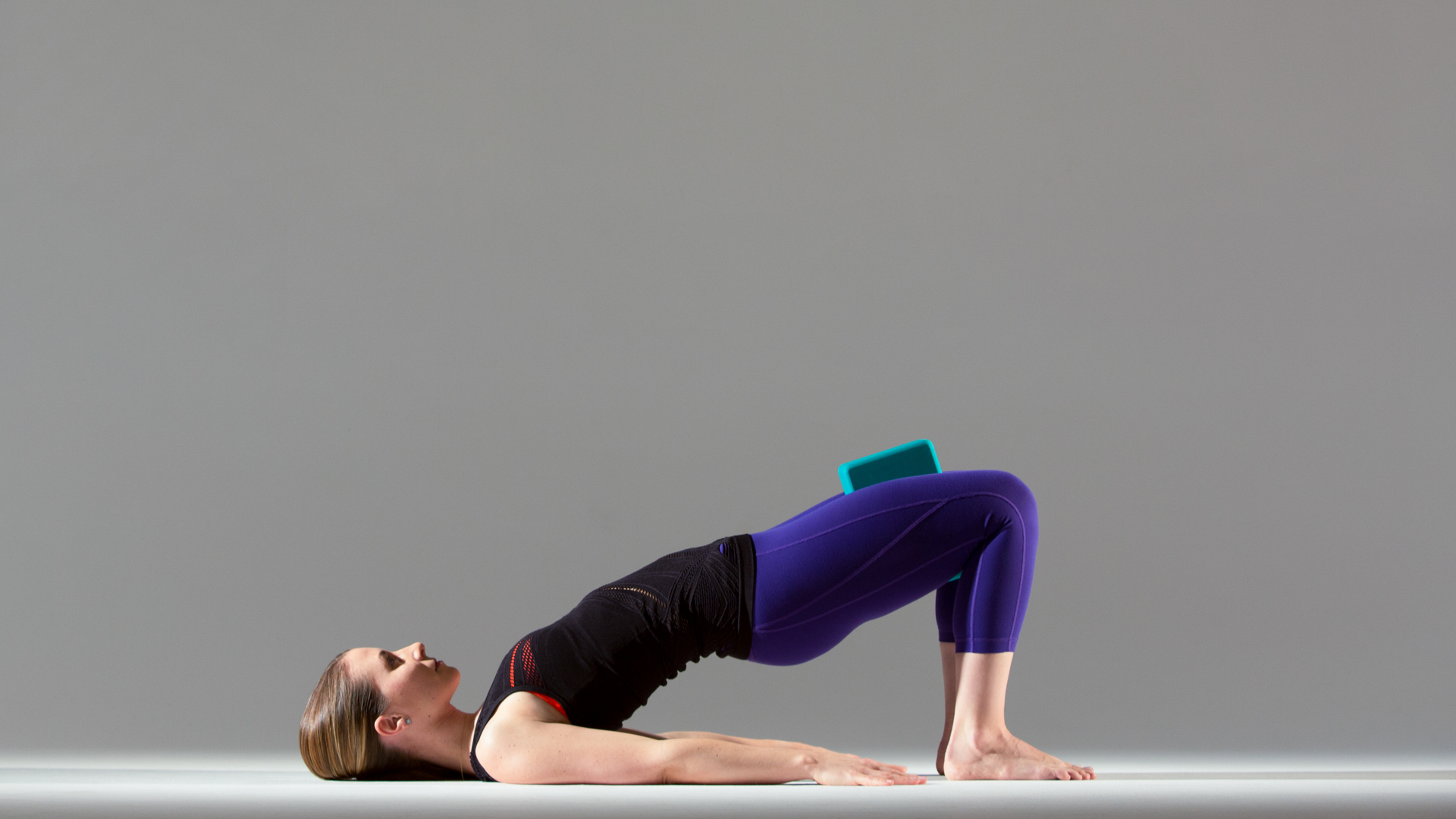 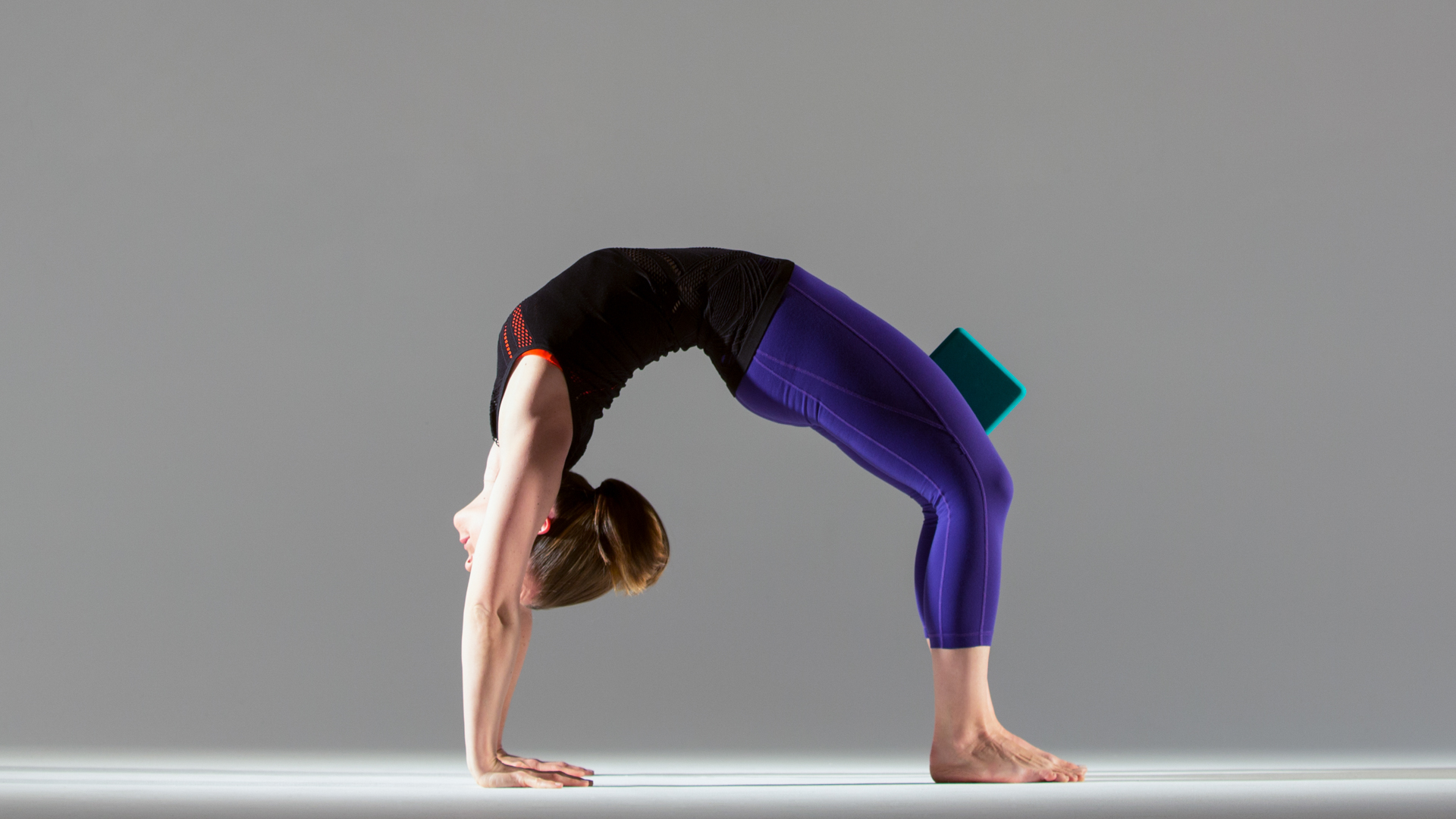 Reif also likes cuing the boost into bridge by saying, "Focus on pushing the heels downward to lift the hips and torso.” According to Reif, cuing the heels down has the benefit of “gently engaging the hamstring and calf muscles, which allows for a lengthening contraction that slows down the backbend, a good protection.”

Drawing in the waist, cultivating strength in the legs, and grounding the heels will all stabilize a backbend like bridge or upward facing bow more effectively than tucking the tailbone. However, Reif cautions that even with such careful cuing, there are some students who won’t be able to create the pelvic tilt necessary for a healthy backbend: “Many students will not be able to get to an anterior tilt, especially if they present with the common chronic posterior tilt and flattened lumbar curve, as many older males do.” He recommends that students who are “stuck” in a posterior tilt continue to work on finding a slight anterior tilt and curve in the lower back in neutral spine poses (like mountain) before moving into backbends. They might need to stretch the hamstrings and the lower back in order to make the necessary tilt possible.

2. In a forward fold, the pelvis moves through an anterior tilt into a posterior tilt.

“The tilt of the pelvis in a forward fold is more complicated because it varies according to the depth of the forward fold,” says Reif. “And students might need to concentrate on different actions, depending on whether they are stuck in an anterior or posterior pelvic tilt.”

Moving from a vertical standing position into a fold over straight legs where the spine is roughly parallel to the ground (a high version of half forward fold, ardha uttanasana), the pelvis and lower back ideally retain their neutral position—that is, the pelvis at this stage in a forward fold is ideally slightly forward-tilted with a curve in the lower back. “Slightly rotating the pelvis anteriorly here will ensure that the hamstring muscles (a tight and weak group on most students) are lengthening. This mild anterior rotation will lift the tailbone and allow the spine to elongate,” says Reif. “To protect the back, rather than tucking the tailbone under or flattening the back, try lightly drawing the belly in toward the spine while retaining this anterior tilt to help stabilize the spine.” 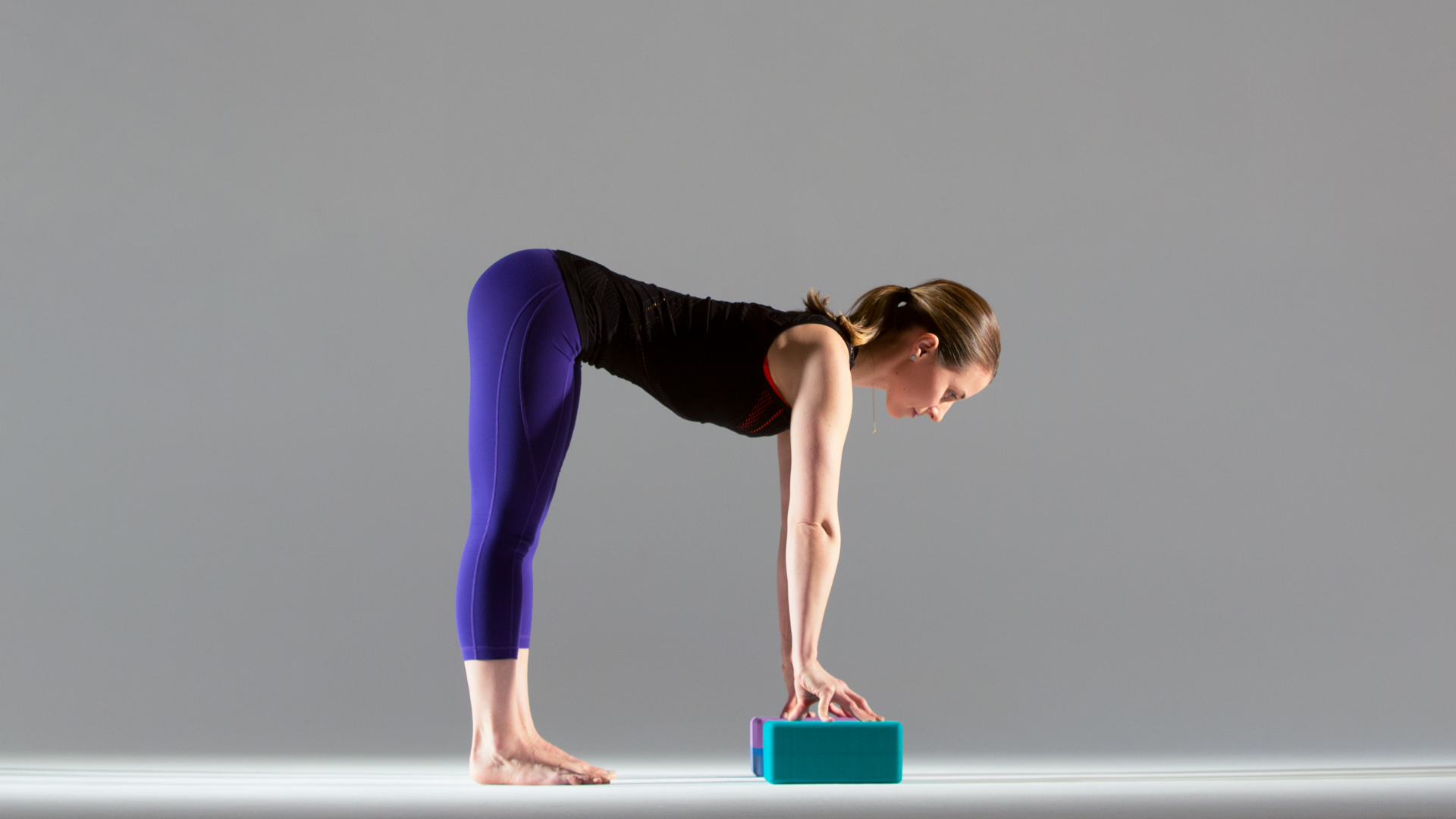 When the legs are straight, and the angle between spine and thighbones becomes less than 90 degrees or so—as it does when we move from ardha uttanasana to uttanasana—the pelvis must move into a posterior tilt and the spine must flex (round).

“An advanced student will have a fluid change from a standing position to a deep forward fold in which they bring their nose toward their shins and their head toward the floor, moving seamlessly from an anterior tilt and a small natural lumbar curve to a posterior pelvic tilt and a flexed spine,” says Reif.

But for many of us who have restrictions that cause us to be “stuck” in one tilt or the other, this transition is not quite so seamless. If someone who is “stuck” in a posterior tilt attempts to move into a fold while retaining that tilt, his lower back has to round excessively to make up for the inability of the pelvis to turn. Here, with the weight of the upper body draping from the lower spine, his intervertebral discs are vulnerable to injury. Reif says, “Rounding too early and returning to erect too quickly, without support from below, is a prime cause of lumbar back pain in beginner students.”

He advises: “To prevent injury, the student stuck in a posterior tilt should aim for the midrange of pelvic and spinal movement. Don’t fold past 90 degrees: Instead, try to get to 90 degrees while keeping a neutral spine.” In other words, rather than having the student with a chronically tucked pelvis and a rounded lower back try to touch his toes, a teacher can have him work on creating a slight anterior pelvic tilt while standing upright in mountain pose, tipping the tailbone back until the lower back curves in. Then have him hinge at the hips to begin to approach ardha uttanasana, going only as low as he can while keeping the curve in his lower back. This will likely mean bringing his hands to blocks, a chair, or his thighs or shins to avoid overstressing the spine. “Over time, as tightness is released, the pelvis will rotate more and more over the tops of the thighs, and the spine will be able to elongate when it’s about parallel to the earth.” 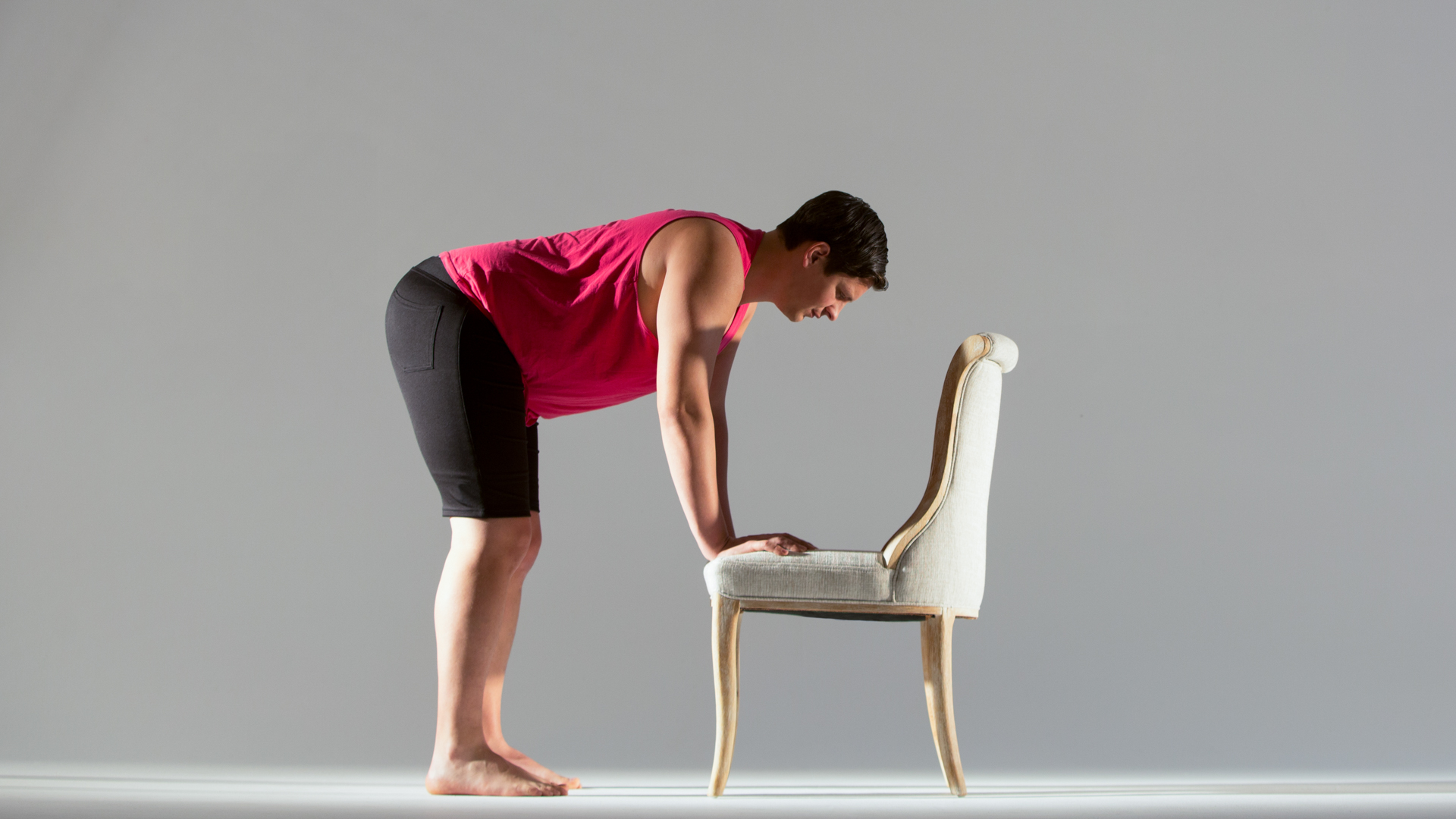 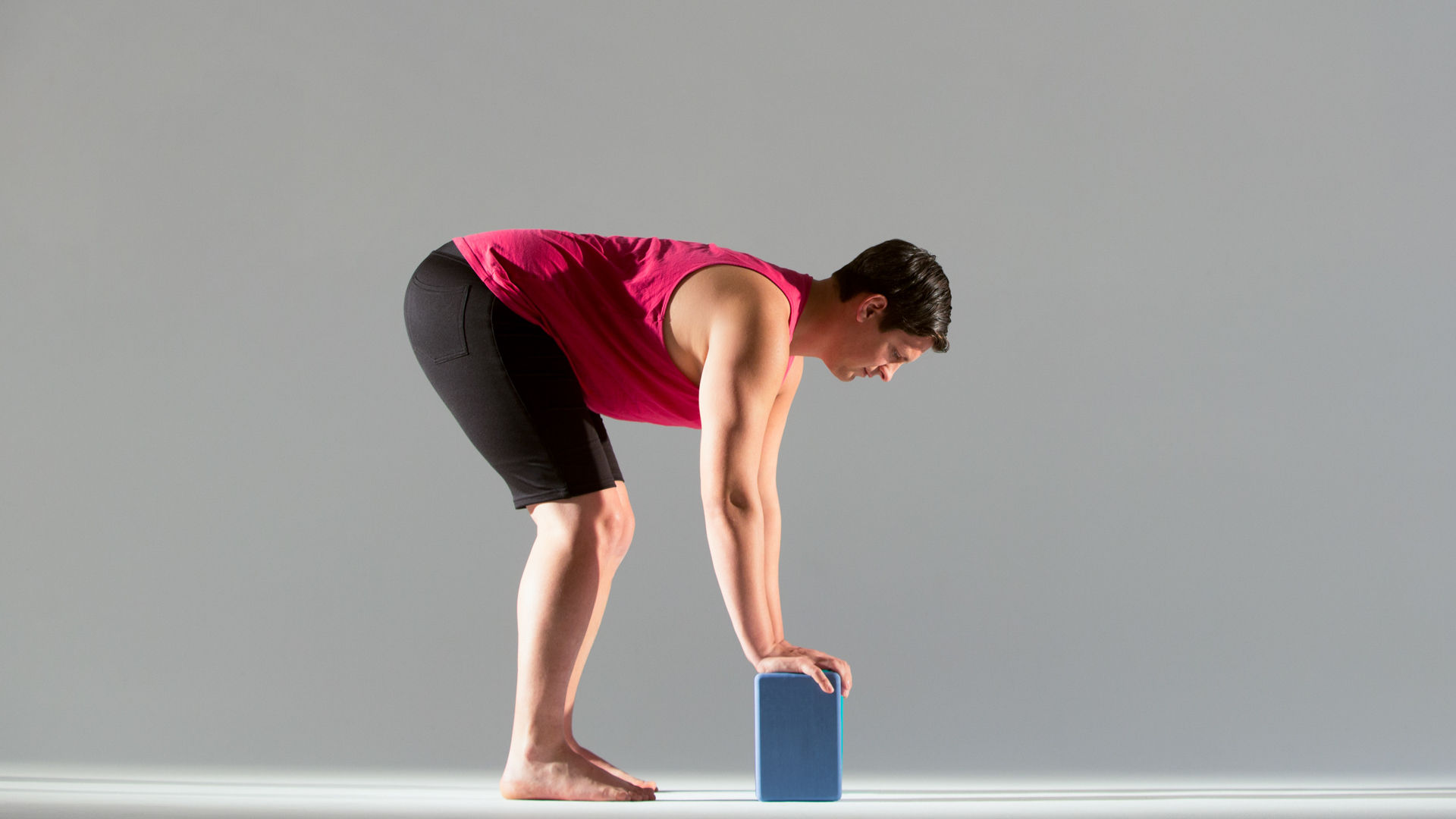 Only once that student can find and hold an anterior tilt in ardha uttanasana without strain should he attempt to go deeper into the fold. However, Reif emphasizes that touching one’s toes is not necessarily the goal, particularly for those with a history of lower back pain, or long-standing poor postural habits that have limited their range of motion. Better goals? “Protecting the back from injury or re-injury by aiming for a more neutral spine, modestly improving flexibility, and gaining better core control of the spine and pelvis,” says Reif. “Some students may never advance to the more extremes of range of motion. The more moderate forward fold may be adequate forever.”

Extremely flexible yogis, along with those students who are “stuck” in an anterior pelvic tilt (for example, many new mothers and people with more weight around the belly), may have different challenges when moving from ardha uttanasana to uttanasana. When making this transition, they may not be relinquishing the anterior pelvic tilt and lumbar curve, continuing instead to tip the tailbone toward the ceiling and curve the lower back in. “Keeping an anterior pelvic tilt at this depth in a fold may stretch out the ligaments that keep the hip joint stable. Ligaments lack sensation, so we cannot feel when they are being overstretched. This continuous tugging on the joints in some yoga poses, like forward bends, eventually may compromise hip stability and lead to hip bursitis and a gradual wearing out of the hip joint.” The goal for these students would be to aim for a posterior tilt as they go past that 90-degree mark. “As they fold past the point where they’re parallel to the earth, they can and should flatten the back and think about pulling in a drawstring around the waist in order to move the pelvis in a posterior direction.” 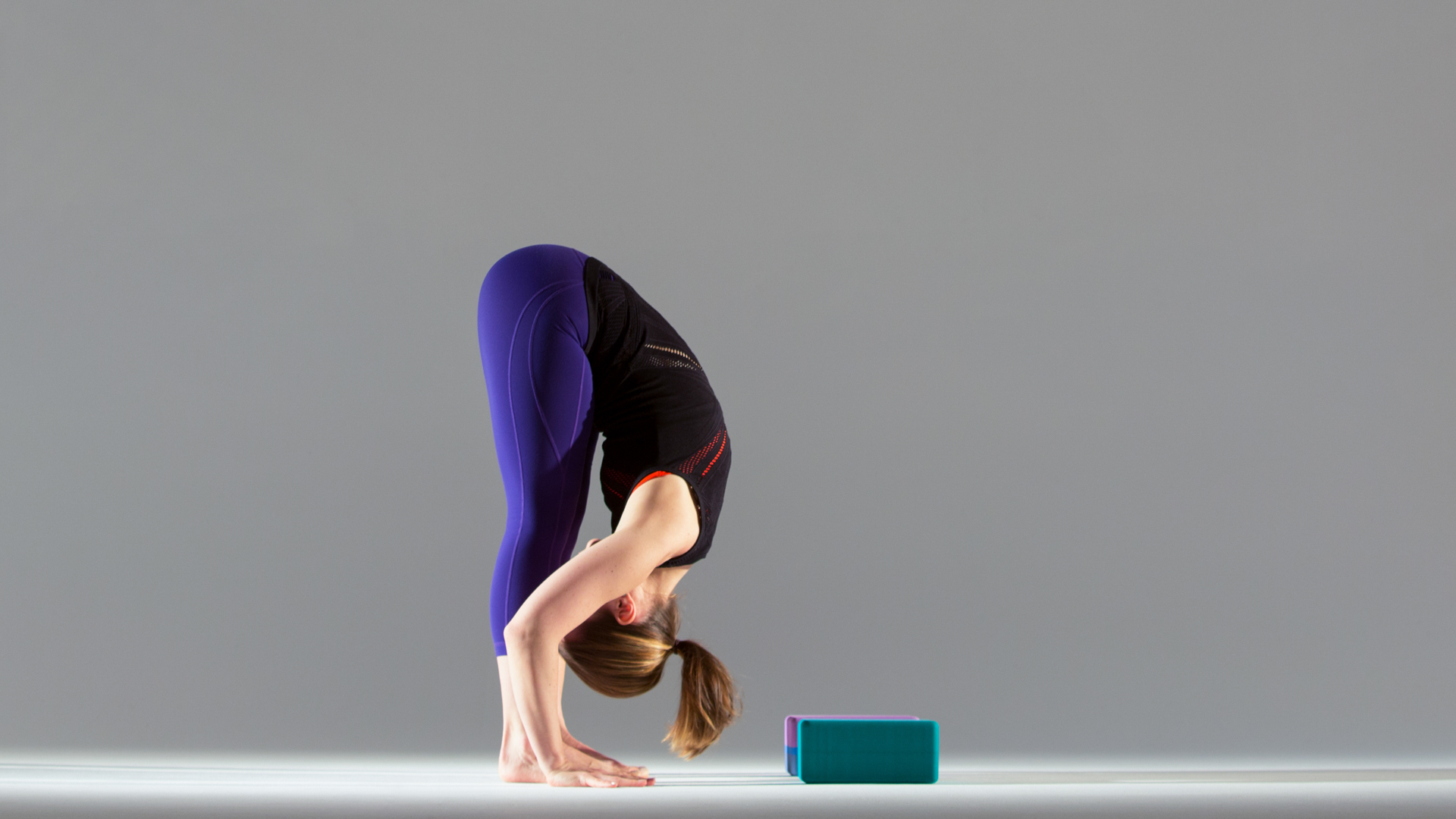 “The ideal pelvis can move freely from one tilt to the other,” says Reif. A yoga practice has the benefit of encouraging body awareness, through which students gradually gain control over the pelvic tilt. A yoga practice that encourages the natural movements of the pelvis when backbending and forward folding—moving the pelvis anteriorly in backbends, and through an anterior tilt into a posterior tilt when forward folding—has the potential to increase controlled pelvic mobility and prevent back pain.

Reif reminds us also that working with pelvic tilts in a yoga practice can translate into our daily lives, where it will pay off in easier, more fluid movement. “When you reach up and back to change a lightbulb overhead, or reach down to pick up something from the floor,” he says, “your pelvis and lower back will already know what to do.”