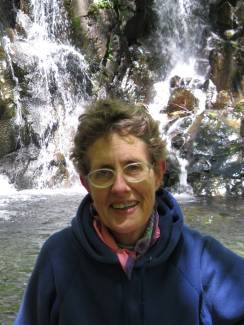 The road to Union Hill Baptist Church in rural Buckingham County, Virginia, is about two miles long. Along the way, there are a few one-story houses in between stands of young pine and hardwood trees, but at the church itself, no other buildings are in view. A Toyota with a license plate reading “Going Om” is parked in front, and two white men are hanging a banner that depicts a gas pipeline as a fire-breathing dragon while touting the slogan “All Pain. No Gain.” A gentle rain is falling on this Sunday afternoon as the church fills with middle-aged African-American members and Yogaville devotees who have come to hear two speakers from New York State, experts on the impact of fracking and natural gas pipelines.

All are here to find out what they can do to stop the proposed Atlantic Coast Pipeline.

Swami Dayananda arrives in her light peach-colored robes. The other members of the Yogaville community present are in street clothes, identifiable only by their Sanskrit names. All are here to find out what they can do to stop the proposed Atlantic Coast Pipeline. 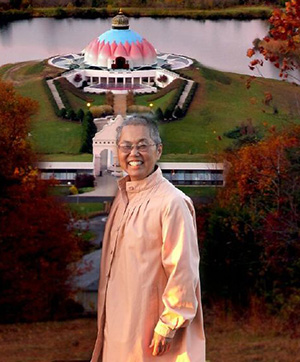 Dominion Power wants to build a 550-mile, 42-inch diameter pipeline that will cut through the heart of Virginia to send fracked gas to North Carolina for electric power generation. The plan includes placing a compressor station within a few miles of Yogaville, a long-standing yoga ashram and community in Buckingham County that, until now, was "in the middle of nowhere" but is now situated in the middle of the opposition to the proposed pipeline, which is bringing together conservative property rights advocates, farmers, and environmentalists across the state.

Yogaville, founded by Swami Satchidananda in 1980, is home to about 200 residents on 600 acres. Shri Satchindanda died in 2002, but monks and lay residents carry on his vision of a yoga community. Friends of Buckingham was started in the fall of 2014, spearheaded by Kenda Hanuman and other members of the Yogaville community. It was modeled after Friends of Nelson. Nelson County, which is to the west and slightly north of Buckingham County, is also rural, but unlike Buckingham, supports industries like winemaking, breweries, and resorts.

By contrast, in Buckingham County there's little evidence of human economic activity, save for a few hundred acres of clear-cut forest near Yogaville. Last summer, the Buckingham Board of Supervisors passed a resolution supporting the pipeline. But on April 21, 2015, the same Board reconsidered the issue with a very different outcome. They wrote to FERC, the Federal Energy Regulatory Commission, requesting that a scoping meeting be held in Buckingham County and that the scoping period be extended to June 27. In that same letter, they also wrote: “The area the pipeline is proposing is slated for the future growth of the Yogaville community where pipeline under the surface would materially limit, detract [from], and harm the ability for Yogaville to realize it’s (sic) potential.”

As we evolved and Yogaville saw the need to be involved, they formed another organization, YES.“

Heidi Dhivya Berthoud, a resident of Yogaville for 22 years, said this is the first time Yogaville community members have been involved in anything like this. “I should make a distinction between Friends of Buckingham and Yogaville. We are largely made up of Yogaville devotees, but we are a separate organization. As we evolved and Yogaville saw the need to be involved, they formed another organization, YES.“

Swami Dayananda, coordinator of Yogaville Environmental Solutions, or YES, told  the 70 or so people at Union Hill Baptist Church, “I think this is what you call grassroots movement! Yogaville has been wishing to reach out to churches in the neighborhood, to do some good together in Buckingham, but God has brought us closer together sooner. So sometimes there is a blessing in adversity. We are the people who can make a difference. I truly believe that.” She said the long-term goal of YES is to transition the Yogaville community to renewable energy, but the short-term goal is to stop the pipeline.

Later, when Heather Nolen, a Yogaville resident for three years, was asked how yoga philosophy and practice informs her activism, she replied: “I think santosha (contentment, one of the niyamas, or ethical principles, in the Yoga Sutra) is important. You have to remind yourself: do what you do, then let it unfold. Swami Satchidananda said, 'Find your peace inside, then go out in the world.' But it is important to have those practices that bring you back to your inner peace.”

Diana Woodall is a writer, activist and an alignment-based yoga teacher who lives near Harrisonburg VA.... Read more