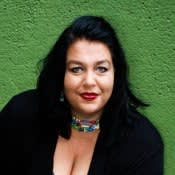 We began with hamstring and IT band stretching, then followed with lunges leading up to hanumanasana—the pose most folks recognize as “the splits.” As long as I’m loosened up, I’ve never had a problem coming into hanumanasana. It’s one of those poses, like scorpion pose or titibasana (firefly pose), that never fails to impress people.

On that particular day, our teacher—also the studio owner—spied a slender white woman, maybe in her thirties, who could come nearly all the way into the hanuman pose. He said to her, admiringly: “Very nice! You know we have another teacher training starting soon. Just sayin’.” A guy across the room said, “You should go for it!” The woman looked down, both embarrassed and proud at the same time. She had, after all, just been given a compliment on her appearance, and she acted accordingly for women in our culture, with modesty and pride.

Let’s be clear that this was a compliment on her appearance, not a teacher’s encouragement of this student’s practice. They are very different things and yoga studios are full of both. While I enjoy this teacher’s classes and I think his cueing and his knowledge of yoga anatomy are superb, he still focuses on appearance in group classes. For instance, he’s never once said to me, in full hanumanasana, “Do you know we have a teacher training program starting soon?”

I’ll tell you why that is. I don’t “look like a yogi.” I’m a fat, middle-aged woman—usually the fattest person in the class. In that particular studio, I’ve never seen anyone fatter than me. Ever. Oftentimes, teachers will recognize that I have a long-term practice, if for no other reason than that I need no instructions for downward dog. I can come into a well-aligned triangle pose without cueing. I don’t make a point of announcing that I’m a yoga teacher, but I don’t hide it either. I practiced for months in this studio before the topic ever came up, but never once did the owner try to cultivate my deeper involvement in studio workshops and trainings.

There’s a reason why the Yoga and Body Image Coalition ran a t-shirt campaign a few years ago, selling shirts and then publicizing images of diverse wearers, with their chests proclaiming, “This is what a yogi looks like.” It’s still hard for many to believe that a wide range of bodies are capable of yoga and that fat people, in particular, can be longtime regular practitioners. So powerful is our desire for yoga to “fix” our fitness and appearance “flaws.” So powerful is our desire to see the teacher’s body as a goal—because surely, they got to look that way by doing yoga.

There’s sneaky reasoning in being able to spot a potential yoga teacher based on flexibility. Most yoga teachers are more flexible than the general population, both because of the practice and because of pre-existing propensity (if you’re already pretty flexible to begin with, you’re more likely to feel like you’re “good at” yoga and to stick with it). In an appearance-driven culture, a lot of people who practice yoga often, or who go to the gym often, do so because it’s a place of praise. There’s nothing inherently wrong with that. We gravitate toward environments where we feel mastery and appreciation. And a deepening practice brings its own joys (once those already-bendy or already-athletic folks become regulars).

For many people, though, the joy of group participation requires a trek through external judgment—sometimes overt, sometimes small and persistent. Persistence in practice is an uphill climb, one that many of us have made willingly. I accept that helping others see, work with, and perhaps even love my body is part of my teaching practice. It’s also a gift I offer for the greater good, even when it’s sometimes personally hard for me.

Let’s be very clear about something, however. Although I have been teaching yoga for nearly twenty years, and practicing for nearly thirty, and I teach yoga retreats internationally, I am not considered employable in most American yoga studios. I’m not looking for a job, but this is important to note. Think it through. I would not even be considered for an interview in most yoga studios. Literally every fat yoga teacher I have ever known—and through my work, I’ve known many—started yoga businesses in order to teach (or joined up with a studio founded by another fat yogi). Maybe they could have found teaching work otherwise, but I think probably not, given the fact that appearance is often more important than how one teaches, what one brings to the practice, one’s quality of focus on the eight limbs of yoga, and even one’s ability to demonstrate asana—the most basic criteria for teaching a generic gym or studio yoga class.

Although I have been teaching yoga for nearly twenty years, and practicing for nearly thirty, and I teach yoga retreats internationally, I am not considered employable in most American yoga studios.

I’ve been thrilled to see the recent Instagram fame that Jessamyn Stanley attained with her yoga practice. It’s been even more thrilling to hear and read her insights on being a fat, queer, femme, black yogi. We worked together on a panel recently at the Hawaii Yoga Festival, and she has a new book out. All great. I’ve seen how people approach her, starstruck, and each begins in pretty much the same way: “You are so inspiring!”

On the one hand, inspiration is great wherever we can get it. On the other hand, we can delve deeper into “diversity” and “body positivity” if we acknowledge that nearly all of those speaking their gratitude are practicing in studios that would not hire someone who looks like Jessamyn, just as they would not hire me. We dare not look away from the “sideshow” aspect of her fame. I’m grateful that she is discussing it too: “Wow, look what that fat black yogi can do!” There is neither compliment nor encouragement of practice in an admiration that says, If she can do it, then surely I can do it too.

Indeed, students sometimes injure themselves because of the mindset, If she can do it, then surely I can too. Yes, of course we want students who were previously taught that their bodies were incapable of trying new things. That’s one value of body diversity in the teacher role. At the same time, people need to let go of the idea that anything that fat (read: inferior) bodies can do is an “easy” thing for all bodies to do.

My point in bringing up the un-employability of fat yoga teachers is not to say that studios should have some kind of quota for fat or old or non-white teachers, or that they should hire fat yoga teachers just to attract fat clients. Rather, it is that yoga studios must honestly address their studio culture—again and again—in order to challenge social norms and values about appearance that sneak into our practice. Genuinely ask who feels welcome and why—and whether that population looks like the broader community in which that studio is located.

This is an ongoing discussion and an open question at the retreat center where I coordinate the yoga program: How do we welcome all bodies to our practice? It’s a question we live and grow into—confronting our own assumptions, biases, language choices, and encouragement as we go.

There’s nothing wrong with taking pleasure in a beautiful pose like hanumanasana. There’s nothing wrong with admiring specific bodies—unless it becomes pathological. When practicing yoga, how are we allowing dominant cultural values such as grasping toward youth, beauty, and praise to supersede the broader values of yoga? This interrogation can be undertaken both personally and in community, as it is at the quarterly teachers’ meetings I facilitate.

If we don’t take up these questions, maybe we’re not really doing yoga. And if it’s just exercise and stretching, then call it the splits—because Hanuman’s love has nothing to do with it.

Editor's note: If you're interested in Kimberly's retreats, she has one coming up in and another in !

Kimberly Dark is a writer, sociologist, storyteller and yoga teacher. She works to reveal the hidden... Read more