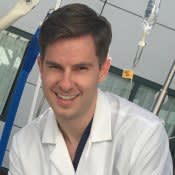 Surgeon and Yoga Medicine teacher Dr. Ryland Stucke explains how yoga can help with this common, yet often misunderstood condition.

Editor's note: The below are intended to be general recommendations for yoga practitioners and teachers. They are not a replacement for the personal advice of a health professional.

You may have heard of rectus abdominis diastasis, also known as “abdominal separation” or “false hernia.” It’s often caused by increased abdominal pressure, and is common during and after pregnancy (though it can occur in those who have not been pregnant as well). In fact, in one study, diastasis was found to occur in 66 percent of pregnant women in their third trimester and 36 percent of women who were at five to seven weeks postpartum. (1)

Diastasis is recognized by a wide and deep “valley” between the abdominal muscles when they’re at rest or by a bulge running from the sternum to the belly button when one is doing core work. Some describe its appearance as similar to a “shark’s fin,” and you’ll surely know it if you have it. The consequences of this are often not severe, but can include abdominal weakness and instability, pelvic floor pain, and incontinence, symptoms which are much more common than people realize. (2)-2b

Diastasis can spontaneously self-correct after childbirth, but if it persists at eight weeks postpartum it’s unlikely to resolve on its own, and that means it’s time to get to work! (3)

Thoughtful core awareness during and after pregnancy, especially in yoga poses that target the transversus abdominis and obliques, may increase the chances of resolving the condition.

The rectus abdominis, also known as the “six-pack,” is a paired muscle that runs from the ribs near your sternum down to your pubic bone. Diastasis occurs when the midline connection between the rectus muscles, called the linea alba, is stretched over time and the distance between the muscles increases.(4)  A space greater than about two and a half centimeters is typically considered diastasis. (In my experience, the wider the diastasis, the more likely it is to cause problems.)

How Yoga Can Help

The TVA is the “corset” or “girdle” muscle of the abdomen. The deepest abdominal muscle, it wraps around your core horizontally starting at your spine and meeting in your abdominal midline. Anytime you scoop your belly or cinch in your waist, you are turning on your TVA. There are two layers of oblique muscles that overlie the TVA. The obliques are diagonally oriented sheets of muscles that, when contracted, allow for a twisting motion of the core. Strengthening these muscles can provide more balanced core contraction, taking the strain off the rectus and allowing the diastasis to narrow. (The “shark’s fin” appearance of diastasis will be more visible when the rectus is contracted in isolation because of the additional strain on the linea alba.)

In addressing diastasis, the TVA and the obliques are the muscles you want to focus on strengthening.

Extended bird dog (extending the opposite arm and leg from hands and knees), kumbhakasana (plank), and vasisthasana (side plank) are great postures in which to practice engaging your TVA. Because the TVA helps with stability and posture, it is always gently active. Instead of merely maintaining this typically mild engagement, while practicing these postures, focus on creating a strong, conscious engagement of the TVA. This can be done by scooping the belly or cinching the waist. Any revolved variation of crescent lunge is great for engaging your obliques. Avoid sinking into deep twisting poses. Instead, think about cinching the waist and lengthening through your sides, which activates both the TVA and obliques simultaneously.

Be careful with rectus-focused exercises like crunches. When you activate your rectus muscles in isolation, there is a natural tendency for them to pull apart, increasing the strain on the linea alba—which is likely to cause a widening of diastasis and prolong your recovery time. Additionally, you’ll also want to avoid postures that overly stretch your belly, such as wheel, dancer, and even anjaneyasana (low lunge), unless you can really activate and stabilize your core in these poses. If you do have diastasis and notice a bulge in certain postures, you’ll want to modify those postures to avoid the bulge. (The bulge is usually more apparent when you are activating your rectus muscles without the support of your TVA and obliques). You may need to back off the intensity of some core poses as you learn how to support your rectus abdominis by using the TVA and obliques.

By focusing on core stability, over weeks or months you may begin to notice gradual changes. With dedication and diligence, the gap between your rectus muscles may start to close. In extreme cases when the gap either does not close or causes abdominal or pelvic instability or dysfunction, surgery may be necessary. The need for surgery, however, is rare.

Adjustments and advice from a yoga teacher familiar with anatomy can ensure that you’re on the right track. And as always, if you experience pain in certain postures, or have pelvic floor instability or incontinence related to diastasis, consult a medical professional.

Meanwhile, cultivate patience, be mindful about the muscles you're using, and have fun on your journey of exploring your abdominal wall anatomy!

Dr. Ryland Stucke received his M.D. from Oregon Health & Science University in Portland, OR, and is finishing... Read more