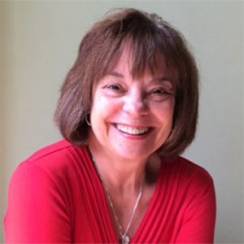 My great-aunt Hattie used to complain about her back. Sometimes when she rose from sitting she would straighten up slowly, place a palm over the back of her pelvis, and let out a slightly audible groan. “It’s my lumbago, honey,” she would complain. “Auntie’s had it for years.

With the wisdom of hindsight as well as training in physical therapy, I now guess that her “lumbago” was actually pain associated with the sacroiliac joint. This is the site where the ilium bone of the pelvis and the sacrum bone of the vertebral column come together. Sacroiliac dysfunction is defined as a slight mismatch between these joint surfaces, and it is not uncommon in yoga students. To understand why, one first needs to understand the basic anatomy of this specific area.

Sacroiliac dysfunction is defined as a slight mismatch between these joint surfaces, and it is not uncommon in yoga students.

The word pelvis means “basin,” and it serves as the container and protector of the abdominal organs. The pelvis also creates support for the base of the vertebral column as well as provides the attachment for the lower extremities. The gently curved sacrum consists of five vertebrae which fuse together by the age of 25, and form a single wedge-shaped bone which is connected to both the last lumbar vertebrae and the ilium bone of the pelvis. When we stand, the sacrum is designed to actually wedge down firmly into the pelvis, which helps to create stability. During sitting this tight connection is lost and must be reestablished as one returns to standing. If there is an existing positional fault or misalignment between the sacrum and the pelvis this slight movement is interfered with. This was probably what caused the distress my great-aunt felt as she tried to stand, and is termed “sacroiliac dysfunction.” 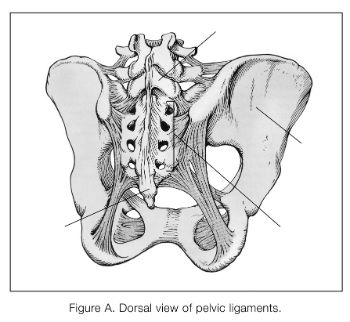 Additional stability in the area is offered by a series of strong ligaments which hold the sacrum in place nestled against the pelvis. But they can become overstretched by habitual asymmetric standing, sleeping, or sitting postures, as well as by performing yoga asanas in a manner which creates torque across this joint (more on this later). In addition to the ligaments which hold bones together, most skeletal joints have the added benefit of muscles around them which help to create stability (think, for example, of the shoulder with the strong deltoid on the upper outer arm). The sacroiliac joint, however, has only one small muscle, the piriformis, which crosses the joint and can thus lend stability to the area. 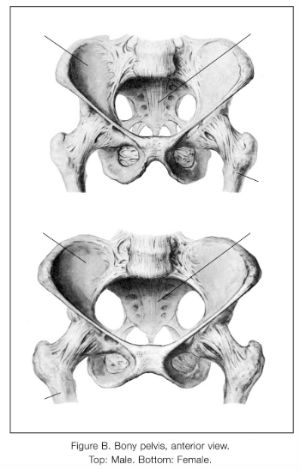 As if this were not enough to predispose the sacroiliac joint to instability, there are additional factors in women which can contribute to increased instability. The first is that only two bony segments of the sacrum join with the pelvis instead of the three which join together in males. (This difference, as well as all the others, is directly related to childbearing.) Second, in women the joint surfaces at the sacroiliac joint are more shallow than men’s. Also, the sacrum bone itself is wider in women and this width contributes to an increase in the natural torque across the joint as the legs move in an alternating pattern during walking. Hormonal changes are part of the picture as well. The monthly hormonal shifts of menstruation as well as those of pregnancy and lactation contribute to ligamentous laxity in the sacroiliac joint, and thus increase the likelihood of misalignment between pelvis and sacrum. Childbirth itself can be traumatic to the joint.

During the practice of yoga asanas, as well as in some kinds of sports like golf and tennis, we often find asymmetrical movements which can stress the integrity of the sacroiliac joint. The asymmetrical nature of a golf or tennis swing, accompanied by great momentum, can move the sacrum and ilium in opposite directions, and this is at the heart of what creates difficulty for this joint. In yoga, we practice asymmetrical movements all the time, especially in poses like forward bends and twists.

A common forward bend which can cause difficulty is janu shirshasana, commonly known as the “runner’s stretch.” This pose is practiced by sitting on the floor, bending one knee, placing that foot near the groin of the opposite leg, and finally lowering the thigh and knee to the floor before bending forward. Experienced students often point the bent knee backward instead of directly out to the side. 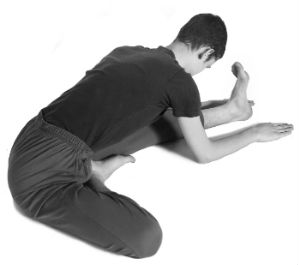 This pose can cause difficulty in part because the sacroiliac joint is in a less stable position when we are sitting. (Remember that sitting releases the self-locking mechanism between the wedged-shaped sacrum and the pelvis which is created during standing.) What is more, the pose is by its very nature asymmetrical, thus causing potential rotational stress across the sacroiliac joint. When the right knee is bent, for example, and we are stretching forward in the pose, the right side of the pelvis is being held stationary, or in effect moving backward, while the spine is moving forward. This separation of pelvis and sacrum can contribute to sacroiliac dysfunction and can exacerbate an existing imbalance.

If you suffer from diagnosed sacroiliac dysfunction on the right side, try this variation in the pose. It may help to alleviate pain as well as prevent further difficulty. Instead of placing the right foot so near the inside top of the left thigh, place the right foot at the side of the left knee or even near the calf. Then when you bend forward concentrate on moving the right side of the pelvis forward just as you do the spine so that the spine and the pelvis move together.

This is the most important concept to remember about the sacroiliac joint and practicing yoga poses. In all movements, pay attention to where the sacrum is moving in relationship to the pelvis. One way to think of it is this: The sacrum has an identity crisis. It wants to know, is it vertebral or is it pelvic? Does it go with the spine or stay back with the pelvis? If you move in such a way that you separate the sacrum from the vertebral column or from the pelvis there will be stress on the joint. So focus on bending from the hip joints in all sitting poses so that the pelvis, sacrum, and lumbar spines are moving forward and together in harmony. 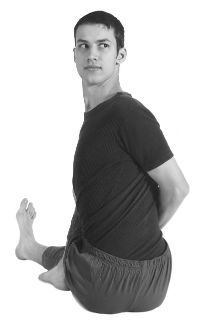 Some years ago I was experiencing sacroiliac pain, and I decided to become a “detective” in my practice in order to ascertain what was causing the problem. On the second day of my “search,” I practiced seated twists exclusively. The next morning I could barely get out of bed. I realized that I was practicing the twists by affixing or planting my pelvis to the floor before twisting, and was then trying to twist my spine by pressing my arm/elbow vigorously against my opposite thigh as if it were a weapon to be used against my spine in the hope of forcing a twist. 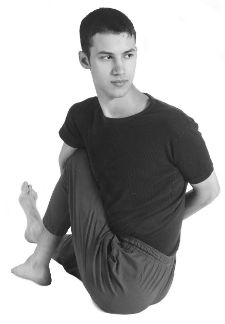 Now I have learned to let my pelvis twist the maximal amount around the hip joints first in preparation for the seated twist; by doing that I practically get half the way around before I even begin to “twist.” In addition, I now focus on twisting from the organs in the front of the body instead of from the bones (vertebral column) in the back of the body. This approach, coupled with the movement of the pelvis first and slow natural breathing, has alleviated about 90 percent of any sacroiliac pain.

There are two basic simple therapeutic movements which can be of benefit if your sacroiliac joint is “out.” The first thing to do is to figure out if the sacrum is rotated forward or backward in relationship to the pelvis. (Perhaps a chiropractor or physical therapist can tell you.) When you know for sure which way the sacrum is tipped, you can try ONE of the following. Remember that sacroiliac dysfunction is an asymmetrical pathology, so unlike yoga asanas, you will perform these therapeutic movements only on one side. 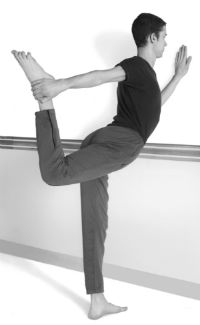 If your sacrum is rotated back on one side, go to the wall and stand about three feet from it; lift the leg backward on the side where the rotation is, and hold onto the ankle with the hand on the same side. Place the other hand against the wall for balance. In a series of gentle pumping motions, slowly lift the knee up behind you as high as is reasonable, preferably about waist high. Keep the elbow straight, and push outward with the ankle against the hand. Pump the knee up and down about 12 times, moving in approximately a six-inch range. Keep the chest upright and the pelvis facing the wall. Then release the leg and DO NOT do the other side. Walk a few steps around the room. Try to do a few simple backbends (like the bow pose) in your practice for the next few days.

If you know that your sacrum is rotated forward, lie on your back with one leg straight, and bend the knee on the involved side toward your chest. Hold the leg between the calf and the thigh and pump gently down about 12 times so that the knee moves down near the armpit. It is more helpful if you can move the lower leg perpendicular to the floor so that the sole of the foot faces the ceiling. Do this if your flexibility allows. After pumping, release the knee and roll toward that side to stand up and walk around a few steps. For the next few days, practice the “runner’s stretch” pose described earlier with that same knee bent, but do this only on the side of the rotation. 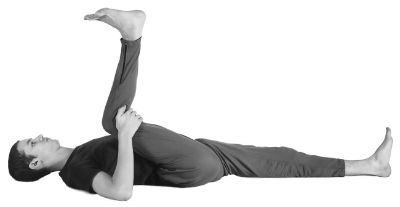 It is important that you do the poses on one side only, and that you keep your breath soft and moving freely. I like to exhale naturally several times on the pumping motions. It is also helpful if you begin to pay attention to how you are sitting, sleeping, and standing. It is asymmetrical and habitual movements which can overstretch the ligaments around the joint and lead to increased instability. Sacroiliac dysfunction is usually related to posture, be that standing, sitting, sleeping, or in yoga practice. Learning to move the pelvis and sacrum together is the key to preventing this. It is a simple solution to a complex problem.