If you've been following the recent yoga and body image conversation, you might be familiar with the revolutionary new organization, the Yoga and Body Image Coalition, founded by sociologist Melanie Klein and yoga teacher Gigi Yogini (a.k.a. Brigitte Kouba). Both Melanie and Brigitte have contributed to numerous web publications, including Yoga Journal, MindBodyGreen, and Elephant Journal, promoting body positivity in modern society and yoga culture.

I recently contacted these inspiring women for a Q&A to learn more about their work, to delve a little deeper into the concepts of body image, “yoga bodies,” cultural expectations, and self-acceptance, and to learn ways that folks like you and me can get involved. To stay updated on the coalition's progress, you can check out their website, Facebook, Gigi Yogini’s blog, Instagram, and twitter.

There’s been a lot of discussion lately about the ideal versus the real “yoga body.” What is a yoga body?

Gigi: We believe that every body is a yoga body. Yoga isn’t only about advanced arm balances or crazy, contorted positions. Yoga includes asana, meditation, mindfulness, and so much more that can benefit a wide range of individuals.

The image of the “yoga body” perpetuated in yoga media and culture is incredibly one-dimensional and exclusive.

Melanie: Yes, if you have a body, you have a yoga body—no matter what your size, age, race or ethnicity, ability, socioeconomic status, sexual orientation, or gender identity. With that said, the image of the “yoga body” perpetuated in yoga media and culture is incredibly one-dimensional and exclusive.

How would you define body image and how is body positivity more than just a size issue?

Melanie: We all have a body image or psychological representation of ourselves; some are healthy and others are more negative. That image is shaped by our day-to-day experiences with the individuals and groups that we interact with, such as our family, peers, and the media. Plus, the normative images of beauty reflected and replicated in the culture are not just about size or weight. They contain messages about what type of physical form is defined as most desirable, including skin tone, age, and physical ability, as well as sexual and gender identity, and socioeconomic status.

What motivated you to take action? What was the impetus behind the coalition?

Melanie: Gigi and I created the coalition as the “action arm” of the Yoga and Body Image anthology I co-edited with Anna Guest-Jelley, in order to expand on the themes and diverse range of experiences contained in the book. 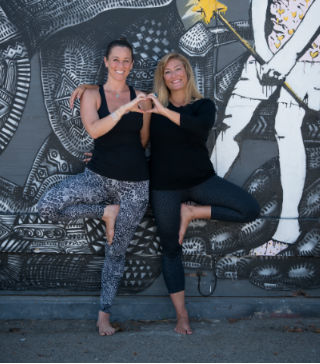 Gigi: At the beginning of 2014, I embarked on a blogging mission, called YOGAudacious, to feature a different story every week of a courageous woman who overcame her fear and self-limiting beliefs to get on a yoga mat and connect with her body and breath. Melanie was one of the first people I featured, and when I learned about her book, I was so inspired to get all these people working together toward the shared mission of making yoga more accessible for all.

Melanie: Given the increasing number of voices in the yoga community today talking about body image and “loving your body,” we decided to pool those voices to maximize our reach, increase our scope, and expand our areas of expertise.

We’re challenging the yoga industry to take risks in creating content that doesn’t mirror the mainstream culture’s propensity to exclude 95% of the population in its representation.

Ultimately, the book and the coalition are fueled by the desire to make consistent yoga practice, with its transformative qualities, a safe and accessible tool in facilitating a healthy body image for every body. With that said, neither the book nor the coalition are promoting yoga as a cure-all, nor are we turning a blind eye to the cues the yoga industry has taken from the fitness and fashion industries. Rather, we’re challenging the yoga industry to take risks in creating content that doesn’t mirror the mainstream culture’s propensity to exclude 95% of the population in its representation. We’re committed to authentic change and creating content that represents the diversity of yoga practitioners and the population in all its forms, with integrity and heart.

How do you overcome the challenges the coalition has faced along the way, and what have been some of your greatest obstacles?

Gigi: A lot of thought-leaders and decision-makers have unconscious biases and therefore perpetuate unhealthy body images in the yoga community. While they might have good intentions, they don’t always know how to follow through in ways that are consistent and truly compassionate to all.

Asking critical questions as a community is the hallmark of a conscious community and living one’s practice.

Melanie: This mentality leads some in the yoga community to interpret critical thinking as “hating” or being “unyogic.” To me, asking critical questions as a community is the hallmark of a conscious community and living one’s practice.

Gigi: We overcome these challenges by being grateful for the forward momentum and continuing to have the challenging conversations in the areas where there’s room for improvement.

What has the coalition achieved thus far, and what kind of goals are you setting for yourselves?

Gigi: Our first achievement was getting a diverse group of individuals who believed in the same values and missions to work together toward a shared goal.

Melanie: Immediately after forming the bigger vision, we reached out to individuals and organizations doing the work, without reducing “love your body” to a catch phrase, marketing slogan, or commodity.

Gigi: We also divided ourselves into committees and started to create new content, as well as sharing each other's existing work.

Within our first month, we were on the Body Image panel discussion at Yoga Journal LIVE! San Diego with members of Off the Mat, Vice President of Community at lululemon, and the Editor-in-Chief of Yoga Journal.

Additionally, we’ve amassed an incredible online presence with over two dozen press links related to the coalition’s mission, vision, and work, as well as launched a successful T-shirt fundraising campaign; and we have been getting ongoing support from individuals around the world every day.

Melanie: We also had several coalition members on the Yoga Journal LIVE! Estes Park panel discussion in September examining power, privilege, and practice. In addition, we have a big campaign planned for this fall, pitches for how to create diverse content, and articles and podcast interviews slated to roll out before the new year. There’s been a lot going on behind the scenes, including plans we can’t share yet.

Of course, you cover more than body image alone. According to your website, the body image coalition also tackles “sexism, racism, classism, heterosexism, able-ism, size-ism, age-ism and consumer culture.” How do these issues overlap?

Melanie: We live in a society that commodifies, objectifies, and exalts the able-bodied, thin, young, Eurocentric, heterosexual, and appropriately “feminine” female body, and celebrates the large, muscular, tough, heterosexual, male body. We’re interested in demystifying the notion that body image issues only affect a certain segment of the population, as well as the notion that these issues are simply a matter of size. As a result, we have to examine and challenge the intersecting, oppressive ideologies that ultimately shape our body image.

How can individuals support the cause and get involved?

Gigi: Of course, first and foremost, individuals can support the cause by consciously choosing to love their bodies and to be a body-positive role model. Plus, sharing our posts, photos, and inspirational pieces will continue to get the message to the masses.

Also, we are currently planning a multi-city tour in 2015 to collaborate with teachers doing the work and to share the importance of body positivity on a larger scale. In order to do this, we need studios to host us, teachers to contact us, and people to financially support us via PayPal to ybicoalition@gmail.com.

Are yoga studios getting involved? Is there a body-positive teacher training or certification?

Gigi: Yes. We have big dreams of promoting body positivity in a much more permanent way. We realize that some of our negative cycles and beliefs are deeply ingrained in our cultural programing and that it will take time and training to see lasting change.

What advice would you offer anyone reading this article who’s struggling to see their own body in a positive and empowering way?

Melanie: First, I’d encourage people to look beyond cultural definitions of beauty to understand they’re variable, ephemeral, and, in most cases in media culture, not real in the first place. Second, I encourage people to identify other talents, abilities, and skills beyond their abs, thighs, or pecs worth developing and sharing. I think there’s a lot to be said for beginning to view ourselves in multifaceted ways and valuing the variety of gifts we have to share with one another. Third, shift to a place of acceptance and love. As Lori Deschene says, “We can’t hate ourselves into a version of ourselves we can love.”

Melanie Klein, M.A., is a writer, speaker, and Professor of Sociology and Women’s Studies at Santa Monica College. Her areas of specialty include body image, media literacy, and overlapping forms of power and oppression. She is a contributing author of 21st Century Yoga: Culture, Politics and Practice and is featured in Conversations with Modern Yogis. She is the co-editor of Yoga and Body Image: 25 Personal Stories About Beauty, Bravery & Loving Your Body, and co-founder of the Yoga and Body Image Coalition.

Brigitte Kouba, M.A., better known as Gigi Yogini, is an E-RYT 500 yoga teacher who dreamed of teaching but believed that her curvy body was her biggest obstacle. Eventually, after three weeks of yoga in Central America in 2008, Gigi realized that her thick thighs, wide hips and large breasts actually gave her a unique perspective and she’s been teaching yoga for all shapes and sizes ever since. She is the creator of YOGAudacious, as well as yoga video producer for YogaVibes and the co-founder of the Yoga and Body Image Coalition.