Are You a Belly Breather or a Chest Breather? Does it Matter?

Yoga teachers love to tell students how to breathe, but no two students and no two rib cages are exactly the same, and this may affect the optimal way for you to breathe. Human variation shows up in the size of our rib cages and in the angle of the ribs. The more horizontal the ribs, the more you may rely upon belly breathing; the more vertical the ribs, the more you may tend toward chest breathing. 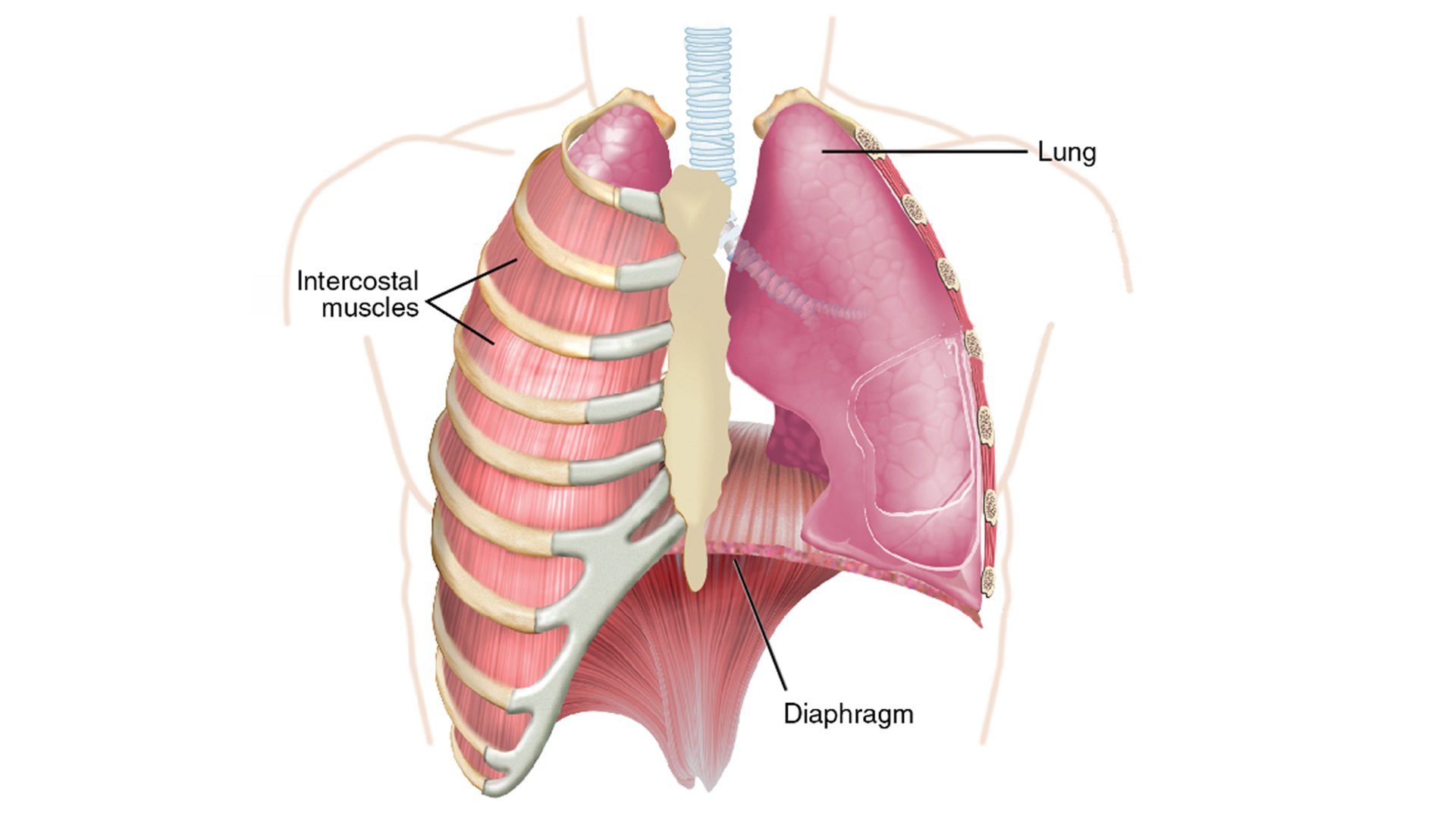 FIGURE 1: The diaphragm viewed from the front. The line is pointing to the dome of the diaphragm. (2)

Unfortunately, using the term “diaphragmatic” with belly breathing is misleading, because all these forms of breath involve the diaphragm!

In belly breathing, the diaphragm is activated and its dome (see figure 1 above) descends into the abdomen, pushing the belly forward. However, in chest breathing, the diaphragm is still active, even if its dome does not descend very far. When the dome is restrained (perhaps through contraction of the abdomen, engagement of uddiyana bandha, or the presence of a baby in the belly), the movement of the diaphragm causes the lower ribs to move outward laterally and anteriorly. So except in cases of diaphragm paralysis, all breathing is diaphragmatic. (Yoga teachers, then, would do well to drop the term diaphragmatic breathing from their vocabulary and be more specific in their naming of the desired breathing strategy.)

Movement of the Ribs and Spine

From their attachment to the spine, the ribs angle downward. This is called their obliquity as shown in figure 2 below. The lower ribs are angled downward more than the upper ribs. As we inhale, while the dome of the diaphragm moves downward and stiffens the lowest two ribs, the intercostal muscles between each pair of ribs and secondary inspiration muscles (such as the scalene muscles) pull the other ribs up. 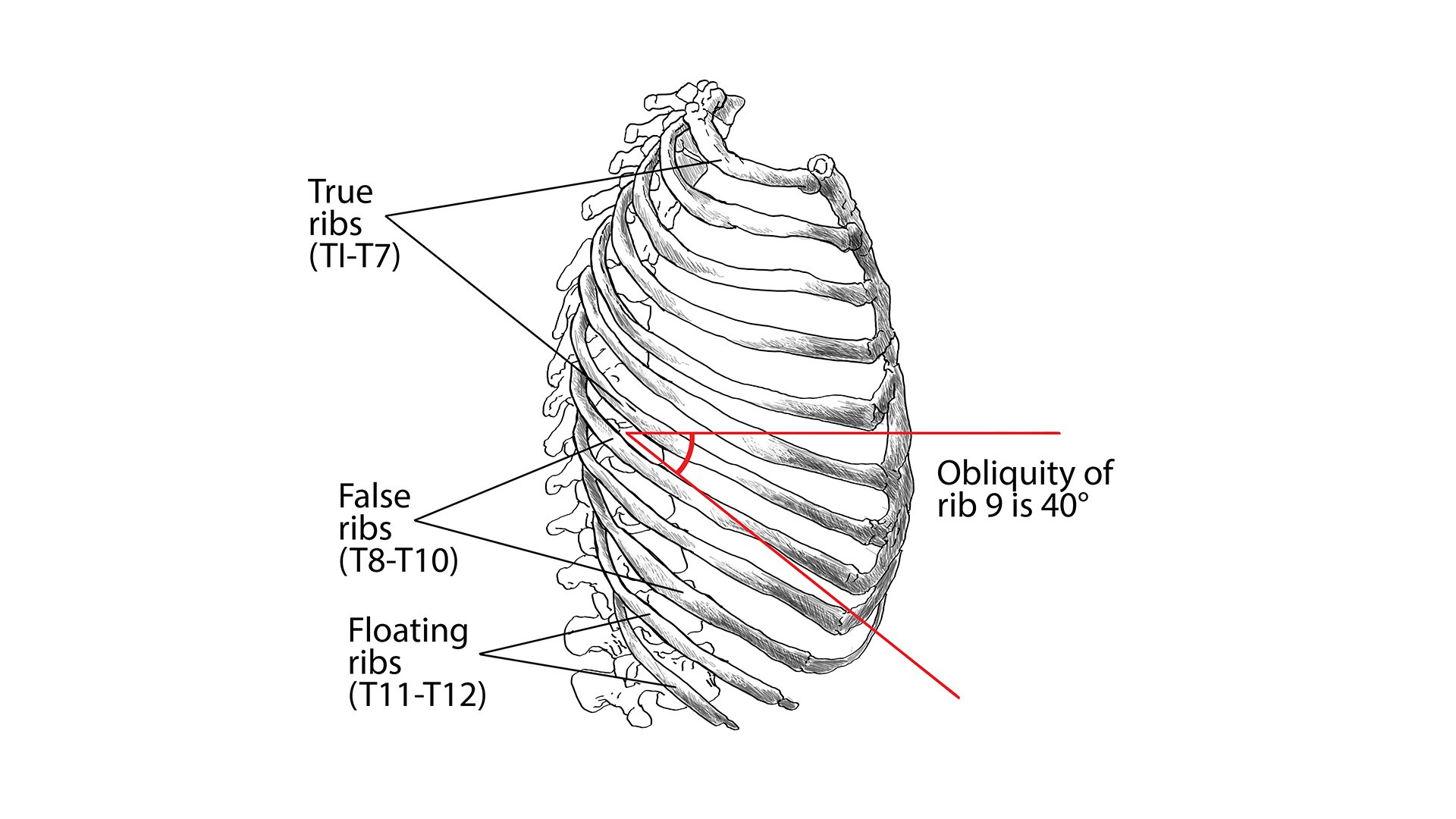 FIGURE 2: A side view of the rib cage. Notice how the ribs angle downward from back to front. This is called their “obliquity.”

Due to the ribs’ obliquity, when they are pulled up, they create space in two dimensions. Their movement is analogous to the way the handle of a bucket moves when it is lifted, as shown in figure 3a below. As the bucket handle rises, it moves away from the bucket’s center. The same effect occurs with the ribs. As they rise, they create both anterior and lateral space. The greater the ribs’ angle of obliquity, the greater the space created. Conversely, the less the ribs’ obliquity, the less the volume will increase as they are lifted up. Completely horizontal ribs would not create any extra lung volume during an inhalation!

The ribs of the newly born and the elderly are much closer to horizontal than the angles in a young or middle-aged adult, which means the breathing strategy of babies and older people may be different than at other times in their lives. 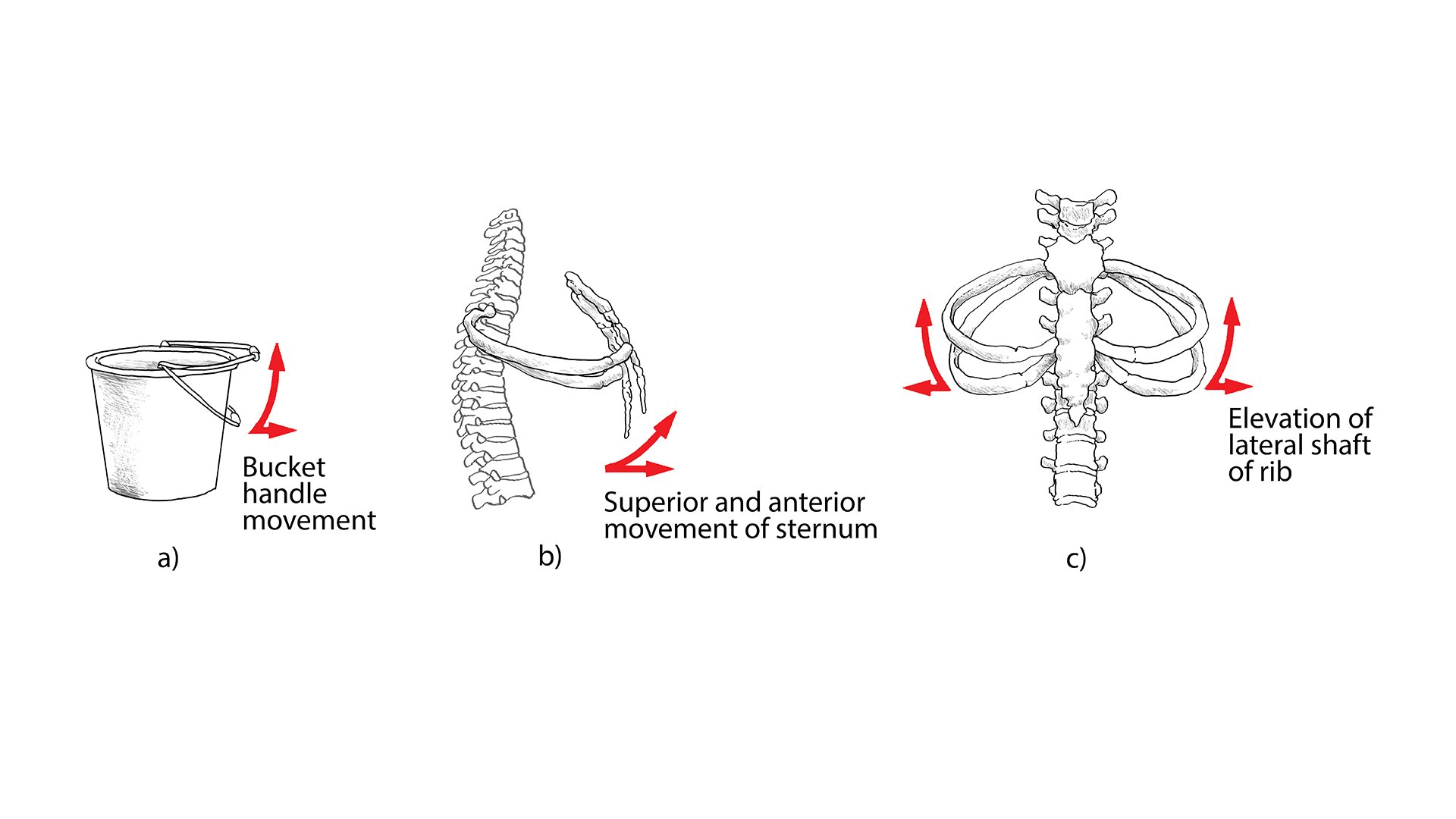 FIGURE 3: (a) When the handle of a bucket moves upward, it follows a trajectory that moves it outward. The same path is followed by the ribs: (b) the ribs and sternum move outward/anteriorly, and (c) the ribs move laterally as well, creating more space within the chest.

You can feel the movement of your ribs in your own breath. Place one hand on the sides of the lower ribs and the other on the sternum and then take a deep breath. Notice how the lower ribs move laterally while the sternum and the upper ribs move anteriorly.(3) You may also feel that all the ribs are lifting up, which may create a slight backbend (extension) in the upper back.

Breathing strategies vary: Some people are chest breathers, while others are belly breathers. Most people, however, use a combination of both.

Within the yoga community, we find teachers who recommend belly breathing and others who advocate chest breathing. In the Sivananda and many other traditions, the recommended strategy is a three-part breath—this begins with the belly moving forward, then the lower ribs moving outward to the side, and finishing with the upper chest lifting up. Exhalations reverse these directions.

In the strategy taught by T.K.V. Desikachar (and a derivative style of yoga called Viniyoga), the order is reversed: First the upper chest is lifted, then the lower ribs are elevated to the side, and finally the belly bulges.

Which is the correct strategy? The answer is, as always, “It depends!” It depends upon the person and the intention of their practice.(4) No single strategy will work for every body—it may depend upon whether they present with any pulmonary issues, such as asthma, COPD(5) or other lung diseases, or it may depend upon the anatomical size and structure of their ribs and spine.

Women’s ribs are more oblique (angled downward) than men’s, which means that "Norma" (an average woman) gains relatively more lung volume when she uses chest breathing than "Normman" (an average man) does.(6) (See figure 4 below.) This preference for chest breathing in women compared to belly breathing in men is a healthy adaptation for dealing with pregnancy. When a pregnant belly swells, the dome of the diaphragm is less able to descend, limiting expansion of the lungs (so belly breathing doesn’t work so well).

Fortunately, due to the greater angle of women’s ribs, thoracic breathing makes up the difference. We can generalize and say that women are more likely to be chest breathers than men, and men are more likely to be belly breathers than women, simply due to the angle of the ribs.(6) Like all generalizations, however, this doesn’t apply to everyone, and there are men who are good chest breathers and women who prefer to belly breathe. 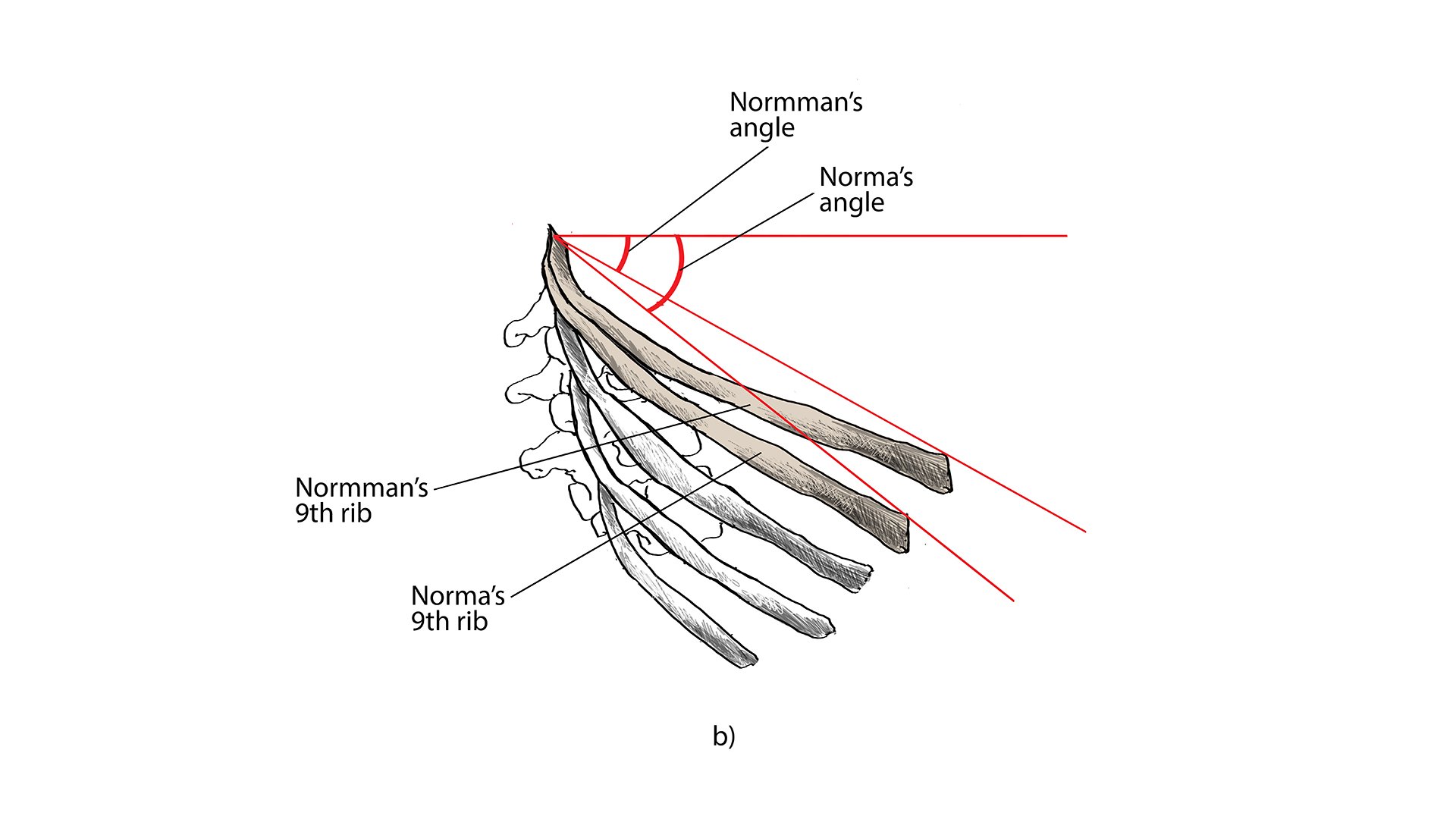 The angle of the rib cage in newborn babies is very close to horizontal, so they do not obtain any “bucket handle” benefit through rib cage movement. Thus, for babies, all breathing is done through the belly. After the third year, the ribs have attained more obliquity, making chest breathing more available.(7) The fact that babies belly breathe does not mean that this is the natural or only way adults should breathe. Babies breathe this way due to the anatomical alignment of their ribs.

As we age and experience stiffening of the rib cage’s cartilage, the ribs become more elevated in their neutral position (called barrel chesting), losing as much as seven degrees of their obliquity.(8) Being closer to horizontal means that less space is created when the ribs rise on inhalations, so as we age, our respiratory volume decreases. This happens to both men and women, but it tends to happen more to women (especially after age 70).

All of this means that your optimal breathing strategy may change as you age. Chest breathing may be great when you are in your 30s, while by your 50s, you may find that belly breathing works better for you.

1. Normally, paradoxical breathing refers to a breath pattern where the diaphragm moves in the opposite direction than expected: up on inhalations and down on exhalations. This does not efficiently draw air into or out of the lungs. There are other forms of paradoxical breathing that can be a sign of pathology, such as the lungs coming away from the inner chest wall, losing their nice vacuum seal. In general, we can say that paradoxical breathing deflates all or part of the lungs on inspiration and inflates them on expiration. This is often caused by an injury to the chest, such as broken ribs.

2. The illustration of a diaphragm is from OpenStax, Axial Muscles of the Abdominal Wall and Thorax, ©2017 Rice University.

4. For a discussion of these various techniques, see a dialogue between Leslie Kaminoff, Mukunda Stiles, Larry Payne and many others at https://yogaanatomy.org/breath-flow-in-yoga-practice/, accessed September 10, 2017.

5. COPD stands for chronic obstructive pulmonary disease and includes chronic bronchitis and emphysema. Smoking causes most of these problems, but there are many other causes as well.