Back Health: Why Endurance Matters More Than Strength!

While strength is prized for obvious reasons, there is little to no correlation between the strength of our back muscles and low-back problems. There is, however, an inverse relationship between flexibility and back problems, with more flexible spines being more likely than less flexible ones to have problems.

Building endurance does not require greater loads and longer stresses, but instead more repetitions. Once endurance is satisfactory, then work on lengthening the time you hold a posture, followed later by increasing the size of the load. Start with a few reps and see how your body reacts; if it feels good, add more reps over time, for as long as you see improvement.

For example, in the balancing cat posture (as shown by the yogi in the top photo and in figure 1c below), start with six reps of 10-second holds.(3) Between holds, do a floor-sweeping movement with the hands and knees (shown in figure 1d, slowly pulling the front hand back along the floor and drawing the back knee forward as close to the floor as possible, and then reaching the hand and foot back away again). Repeat until you have done the six reps. Then do the other arm/leg combination for six reps. Take a 30-second break (child’s pose is nice) and do another set, but with four repetitions of holds per side; then for the final cycle do two reps on each side. In time, if you feel you need more challenge, don’t hold longer but do more reps: adding one rep per set—increasing to seven, five, and three, respectively. 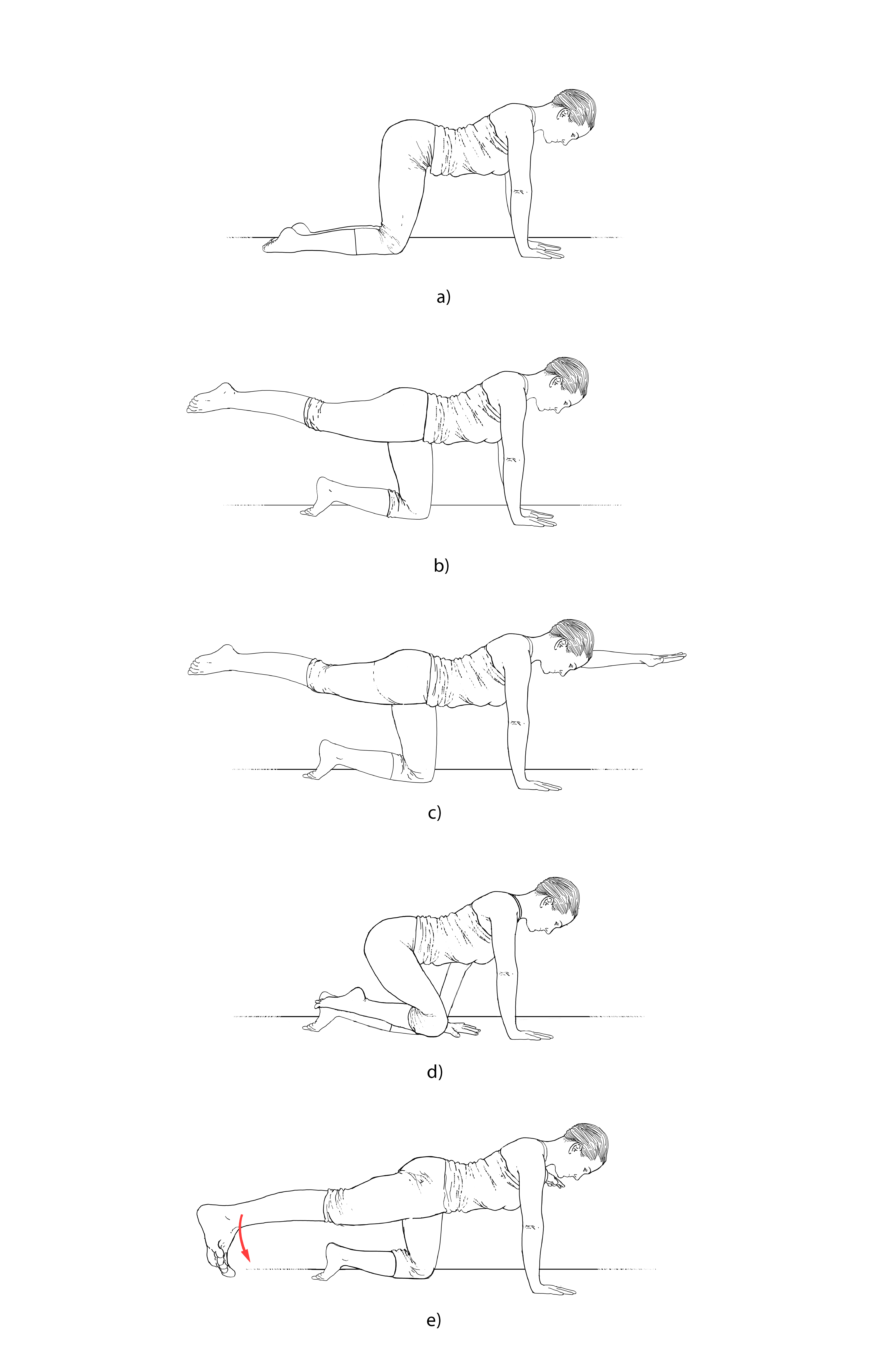 Figure 1: The balancing cat (marjaryasana): Start on all fours (a); extend one leg backward (b), lifting it off the floor but not so much that you lose your neutral lumbar curve; add the opposite arm lifting forward (c), but not higher than horizontal. The sweeping cat: Slide the front hand back along the floor while drawing the back knee in (d). Another more advanced option is the awkward airplane, where the extended arm and leg are abducted to opposite sides (e); keep the spine, neck, and head aligned in the original neutral position; all movement is at the hips and shoulders, not the spine.

As we repeat a movement, our bodies tire, and this can affect our technique. It is better to reduce the times in each cycle of an exercise so that we can maintain proper technique, which helps to prevent injuries.(4) If your intention is to increase endurance, then increase the number of reps over time. Increasing time in each set may increase strength, but to increase endurance it is better to increase the number of sets (rather than to extend the time in each set).

And remember: Endurance is more protective and builds spinal health better than does either strength or flexibility.

2. Back problems are more likely to arise in people with greater endurance in their flexor muscles (the abdominals) than in their extensors (erector spinae), so focus on building the endurance of your back muscles more than that of the abdominal muscles.

3. According to Stuart McGill, limiting the holds to 10 seconds will help to minimize the risk of muscle cramps and restore the oxygen/acid balance; see McGill, Back Mechanic, 103.