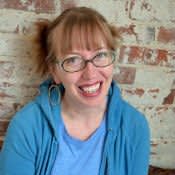 After meeting an insanely high health insurance deductible this year, I considered asking my husband to run over my foot with his car for the grim satisfaction of sticking my health insurance company with the bill.

Instead, I opted to address as many health concerns as possible. The migraines that have plagued me since childhood were high up the list so I booked an appointment with a neurologist who specializes in headaches.

After reviewing my history and examining me he asked, “Would you mind bending forward to touch your toes?”

I folded in half, uttanasana-style, easily putting my palms on the floor and touching my forehead to my shins. He did a double take, made a note, then gestured me back up onto the table.

“Straighten your elbow, please,” he said.

He bent and straightened my elbows and knees, but I could have told him they hyperextend. He’d already seen x-rays of my spine’s scoliotic curves in my chart. He pulled at my skin to test its elasticity.

“Do you have muscle pain?”

“Tons,” I said. “My neck, shoulders, and low back hurt all the time. My sacroiliac joints are unstable, and I have a couple of ribs that move out of place. I’ve had wrist tendonitis since childhood, and an elbow tendonitis that acts up if I’m not careful.”

“Does the yoga help?” he asked.

“Yes—IF,” I replied, “if I’m conservative, which I am. If I push into my flexibility I pay for it.”

“Can you bend your thumb backward to touch your wrist?” he asked.

“Not anymore. I used to do all that kind of stuff as a kid—touch my feet to my head, stick my foot behind my head,” I said. “I was really bendy. I’m still a lot bendier than the average human, but not nearly as bendy as some of my colleagues.”

I am what I call a “tight, bendy person.”

My joints are quite mobile—hypermobile—but my muscles are tight, with chronic knots. I’m careful when I practice yoga—with myself and with my yoga students—but am perpetually nursing one ache or another.

Socially and politically I’m left of liberal. But on the mat, in part because of my excessive flexibility, I’m a die-hard conservative. You could say I’m kind of a fuddy-duddy.

Socially and politically I’m left of liberal. But on the mat I’m a die-hard conservative.

“How long did it take you to do that?” wistful students have asked over the years when I sit cross-legged with ease. For many of them, their hips are so tight that they can’t even imagine being comfortable in that position.

“I’ve always been able to do this,” I tell them, not wanting to misrepresent yoga’s capabilities.

I’m not boasting. My hypermobility is pathological.

The neurologist explained that my symptoms pointed to Joint Hypermobility Syndrome (JHS), a condition characterized by joints that move beyond normal ranges of motion.

In yoga class, those who have difficulty touching their toes may feel their lack of flexibility as a liability, and of course it can be. However, while inadequate range of motion isn’t optimal, it’s not nearly as perilous as excessive range of motion, or hypermobility.

People with Joint Hypermobility Syndrome often suffer from musculoskeletal and joint pain and soft tissue injuries like strains, sprains, tendonitis, and dislocations. Because our ligaments are unstable, we have an increased tendency to have scoliosis, TMJ, spinal disc problems, flat feet, and headaches.

Dr. Alan Pocinki, an MD who practices in Washington D.C.’s metro area, and who has written what is in my opinion a groundbreaking article about JHS, explains: “Because…the ligaments [are]…too loose and therefore cannot do their job well, the muscles…are forced to do more of the work…than they are meant to do, so they become strained.” (1)

“We don’t really understand hypermobility yet,” my neurologist told me. “It may be caused by a mutation in collagen genes.”

People with JHS are prone to fibromyalgia, osteoarthritis (which occurs more rapidly in loose joints), and neuropathic pain or numbness.(1) We often bruise easily, and have unusually elastic and velvety skin. We may be markedly uncomfortable standing for prolonged periods of time.

Our nervous systems tend to be overly responsive. Dr. Pocinki writes that “In recent years, [JHS] has been associated with a variety of autonomic nervous system problems. (The autonomic nervous system regulates all body processes, such as heart rate, blood pressure, breathing, digestion, and immunity.)” (1) So we may have circulatory problems (for example, low blood pressure, light-headedness upon standing, cold hands and feet, heart palpitations, varicose veins, and in extreme cases blood vessels can even rupture. And we’re prone to digestive issues like acid reflux and irritable bowel disease. (1)

According to Pocinki, “To compensate for stretchy blood vessels…most people with hypermobility appear to make extra adrenaline...”(1) Over time, excessive adrenaline production can exhaust our adrenal glands, leading to fatigue, difficulty sleeping, anxiety, and depression. (2) Speaking from personal experience, being chronically achy and exhausted takes a major toll.

My neurologist continued on to tell me that autoimmunity is also associated with the condition. That likely explains my Hashimoto’s disease, which is an autoimmune disease of the thyroid. Hashimoto’s made me more likely to develop the thyroid cancer that resulted in surgical removal of my thyroid last February, hence meeting my insurance deductible, which is how I wound up in the neurologist’s office to begin with.

JHS and its similar but more severe sister condition, Ehlers-Danlos Syndrome, are thought to be genetic. Women are around three times more likely than men to have JHS. As children our extreme flexibility may have been considered cute and encouraged—especially if we were involved in activities like gymnastics and ballet.(1)

Obviously a conversation about JHS is relevant to yoga, yet I’ve never heard the condition referred to in any yoga class or publication. I have a hypothesis that, because flexibility is generally positively reinforced in yoga classes, there’s a good chance if we looked we’d find higher incidences of JHS among yogis than in the population at large.

Obviously a conversation about JHS is relevant to yoga, yet I’ve never heard the condition referred to in any yoga class or publication.

People tend to enjoy things we’re good at. Speaking from my own early yoga experience, I equated being limber with being “good at yoga.” I enjoyed my practice more because I felt successful. That early “success” encouraged me to stick with it.

Imagine a scenario in which an instructor with JHS teaches yoga. Flexible people might emulate a pathological range of motion, while tight yoga students—or even those with a perfectly healthy and more normal range of motion—may feel unsuccessful or “not good at yoga.”

Actually, we probably don’t have to imagine this scenario. I think it happens all the time.

I’m a yoga teacher, not a physician, and diagnosis is far outside my professional scope of practice. That said, I see hypermobile students frequently and…wonder.

Yoga can still be great for people with JHS. Stabilizing the muscles around our joints by strengthening through light resistance is helpful.

It’s imperative, though, that we use good alignment when we practice asana and that we refrain from hyperextending our joints. Heavy lifting isn’t good for our joints either, so we may have to modify poses to decrease weight-bearing. For example, bringing our knees to the floor in , or skipping chaturanga entirely. We might need to move more slowly if we become light-headed.

Obviously, restorative yoga, pranayama, and meditation are great support for our nervous systems.

At this time there is no cure for JHS. Right now we can treat the symptoms but not the underlying cause. That said, the confirmation a diagnosis brings could be a huge relief. It was for me.

When you’re tired, achy, and stressed for long enough, it’s easy to dismiss yourself as a complainer or hypochondriac. Understanding there are real physical reasons at play affirms I’m not nuts, emotionally frail, or crazy—at least, no more so than anyone else.