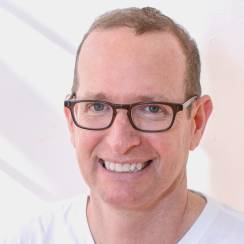 This is the fifth in a  of articles that will cover a number of variations on classical yoga practices in the hopes of supporting teachers in finding safe and beneficial ways for all students to participate.

Relaxation is not just the absence of stress. It is a state that can be cultivated through the practices of yoga—which is one reason yoga is so powerful. Yoga really is an antidote to our stressed-out modern lives, so it’s no surprise that there is often an emphasis on parasympathetic nervous system (PSNS) stimulation during asana practice.

The nerves of the parasympathetic nervous system originate in the cranium and sacrum. Forward bending stimulates these nerves by stretching the neck and low back, which is calming to the nervous system as we literally turn within. We also create a feeling of safety because the sensitive front of the body is well protected. This experience of drawing in energetically is the mark of forward bending and one of its most profound benefits.

However, for many students the standard forward bending postures are not accessible because of lower back issues and a variety of other reasons. These lower back issues often stem from, or contribute to, tight hamstring, hip, and buttock muscles.

Forward bending can address much of the restriction in these areas, but there is a fine line between stretching and straining in these poses. Paradoxically, the very poses that can release tension in these areas can also cause injury if practiced too aggressively.

One of the most important things to consider when practicing forward bends is to learn how to hinge from the hip joint, rather than rounding the lower back to bend forward, which is known as loaded flexion and is responsible for so much injury that many workplaces have put up posters explaining how to avoid it.

Translated into asana practice, this means that students need to work on releasing the hamstrings so that the pelvis is free to tilt forward (anteriorly). The issue is that the hamstrings originate at the sitting bones, and when they are tight they pull down on the sitting bones and prevent pelvic rotation. This moves the forward bend higher, into the vertebrae of the low back. The lower back can be gently stretched, but too much force can cause injuries such as slipped or herniated discs.

An effective way to practice and teach seated forward bends is to consider two approaches to the same pose. In one approach, hinge forward only to the point where you can still keep the spine (including the neck) neutral and elongated. Focus on pelvic rotation and lengthening the backs of the legs, which emphasizes the hamstring stretch. It may be helpful to place a strap around the ball(s) of the foot (or feet) of the extended leg(s) and hold one side of the strap in each hand. This approach is especially useful for students with very tight hamstrings or back injuries, which can make rounding the back especially risky.

The second approach is to hinge forward until you come to the point where you can no longer maintain a neutral spine and then gradually release your spine to allow for an evenly distributed curve, allowing your head to relax forward. This focuses on gently stretching the low back and the back of the neck.

Let’s explore these approaches in a few common forward bends and look at some variations that may make these poses more accessible.

(Head-to-Knee Pose) In janu sirsasana, if a student can’t hinge forward at the hips or sit upright with the leg extended, then a variation is needed. To reduce the stretch in the hamstrings and find more length in the spine in the pose, the student can bend the knee of the extended leg and place a rolled-up blanket or mat underneath it.

Additionally, some students find that the pose feels better when they place a blanket under the knee of the leg that's folded in as well (see picture below). 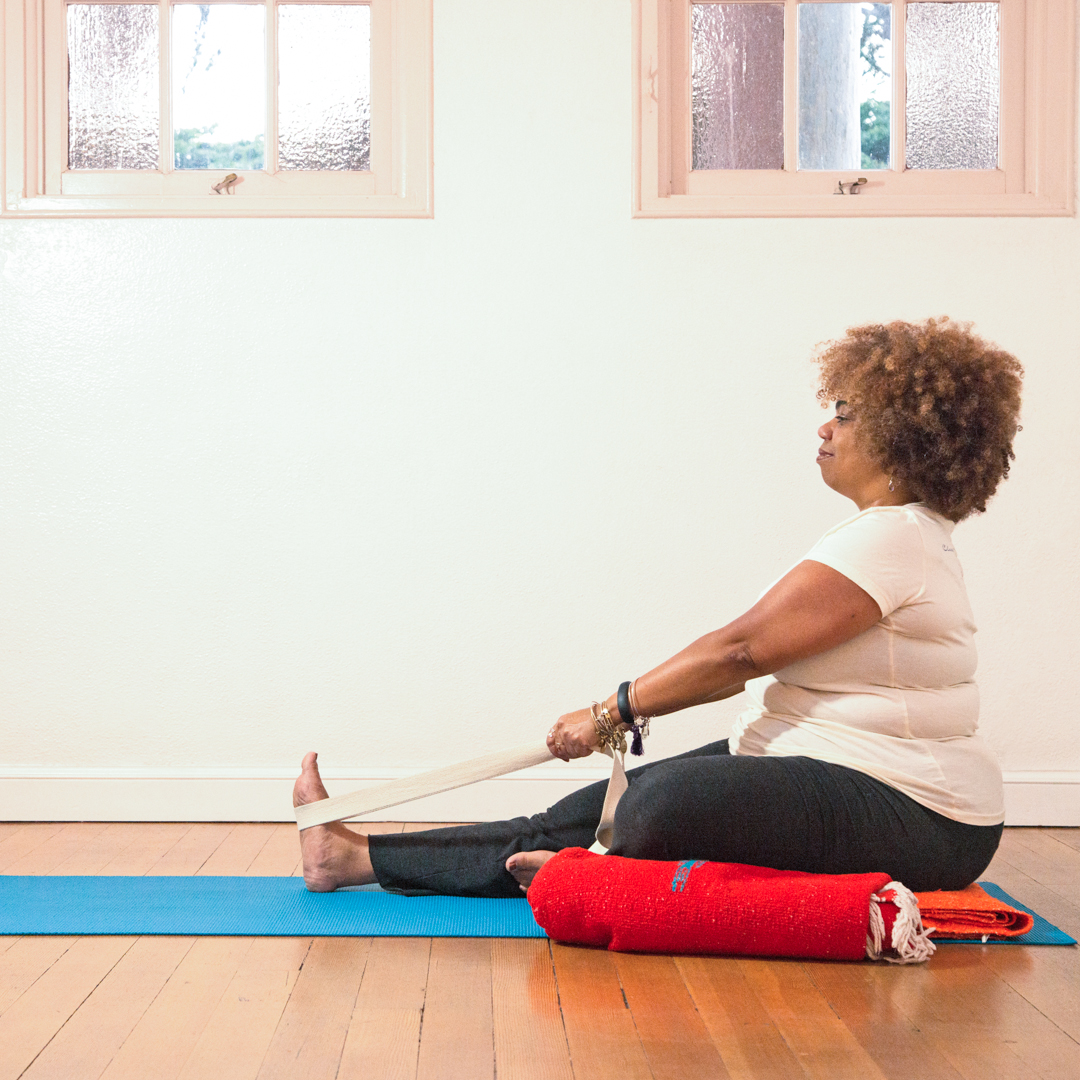 Those practicing in a chair can receive many of the same benefits from janu sirsasana while seated. Place the extended leg on a second chair, making sure that the back of the knee is supported so that knee doesn’t hyperextend. A strap around the ball of the foot can add extra support and reduce the risk of straining the low back muscles—it will also encourage the lengthening of the spine in the forward bend. 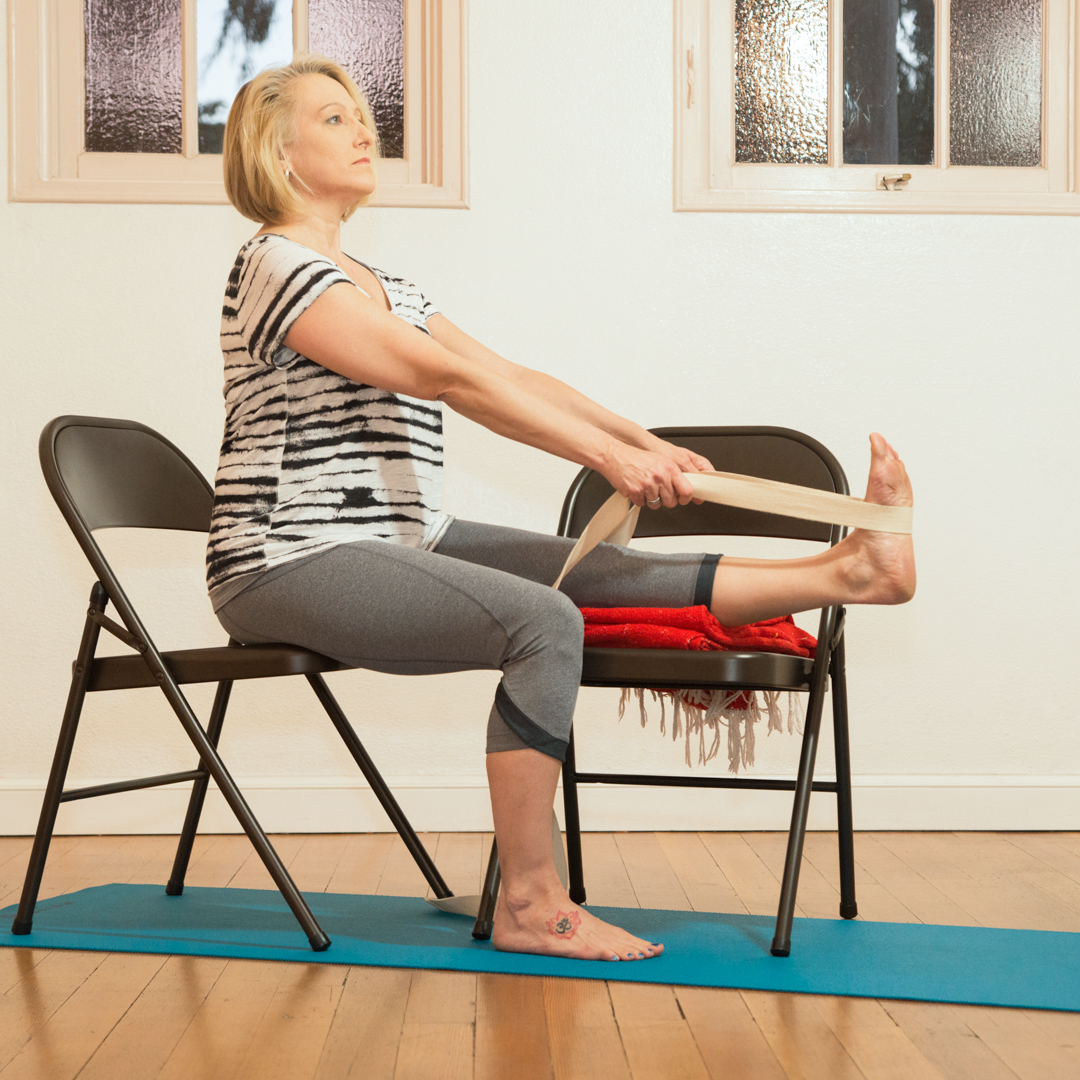 Supta Padangusthasana (Reclining Hand-to-Big-Toe pose) To avoid loaded flexion and rounding the spine in forward bends, students can instead practice reclining hand-to-big-toe pose, which is a similar pose to janu sirsasana, but with a different relationship to gravity.

In this pose, the spine is completely supported, so the focus can be on the hamstrings. Placing a strap around the ball of the foot and holding it with both hands can help control the stretch and create structure in the pose. The arms can be straight or bent, depending on what’s most relaxing. 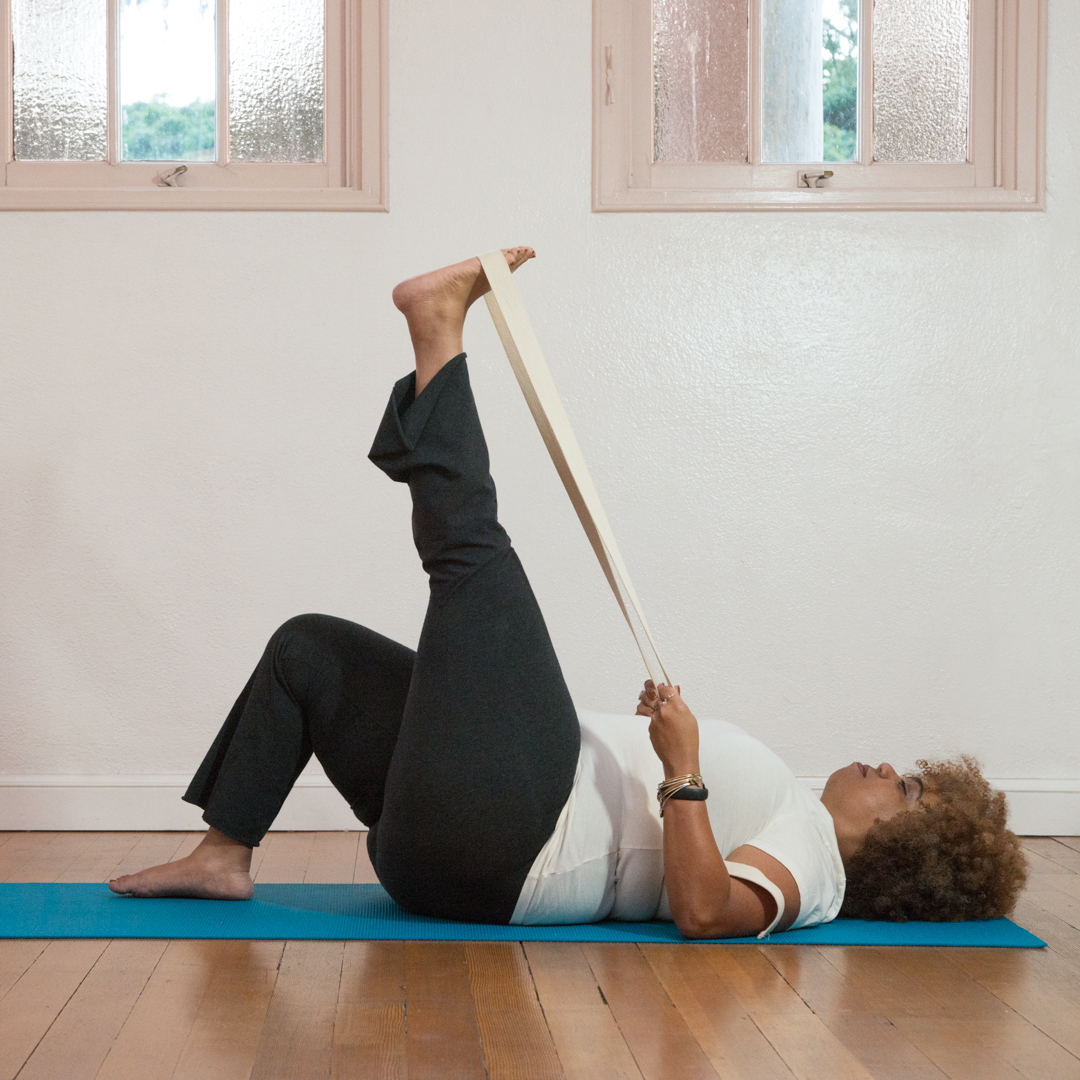 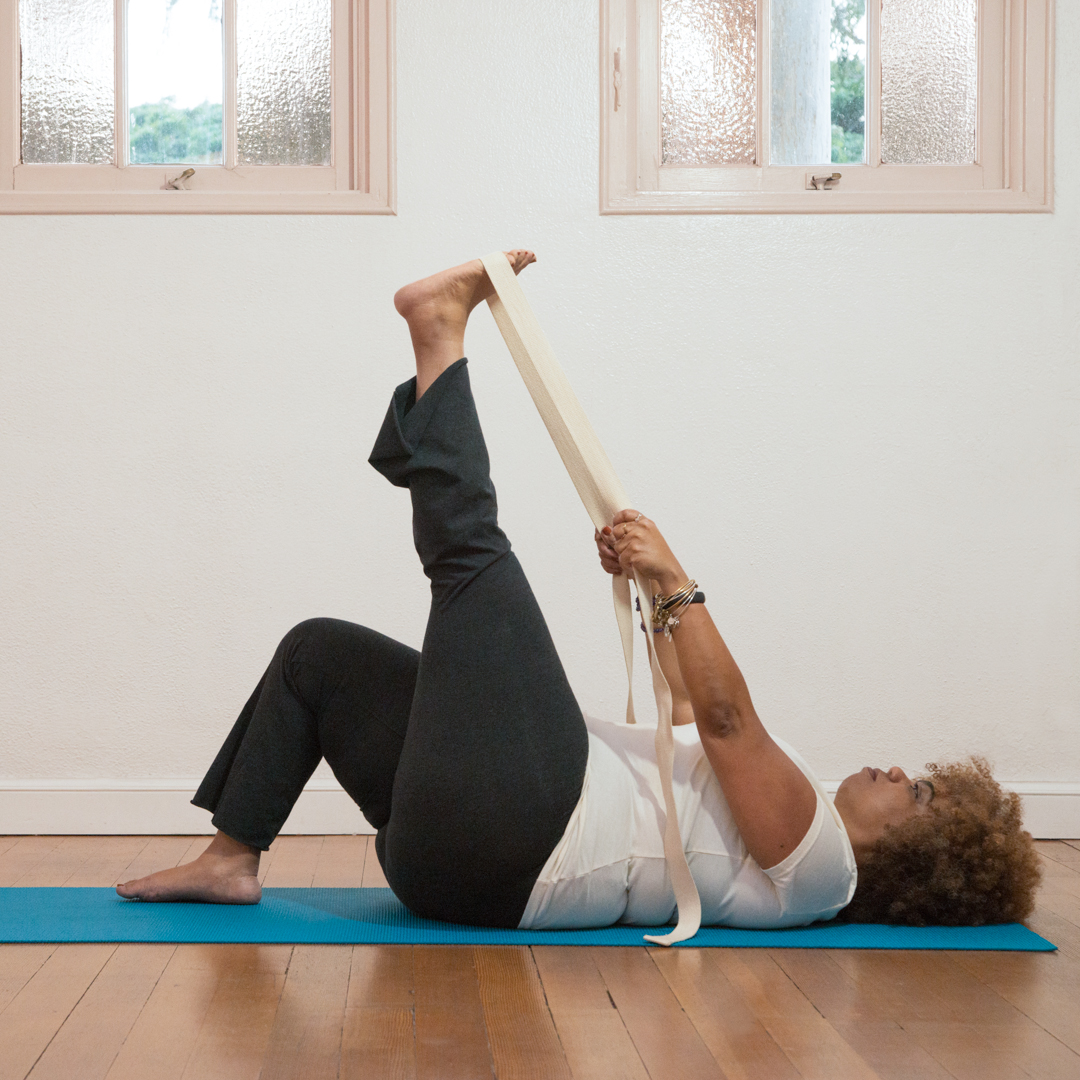 To emphasize lengthening the backs of the legs and avoid gripping too tightly with the hands, students can make a large loop with the strap. They’ll slip the ankle of the raised leg into the loop and hold the other end of the loop in the hands. Palms will be together with thumbs extended and arms straight and raised toward the ceiling. Then, slowly raise the arms overhead, or as far as is comfortable (the strap will sit in the “L” between index fingers and thumbs). 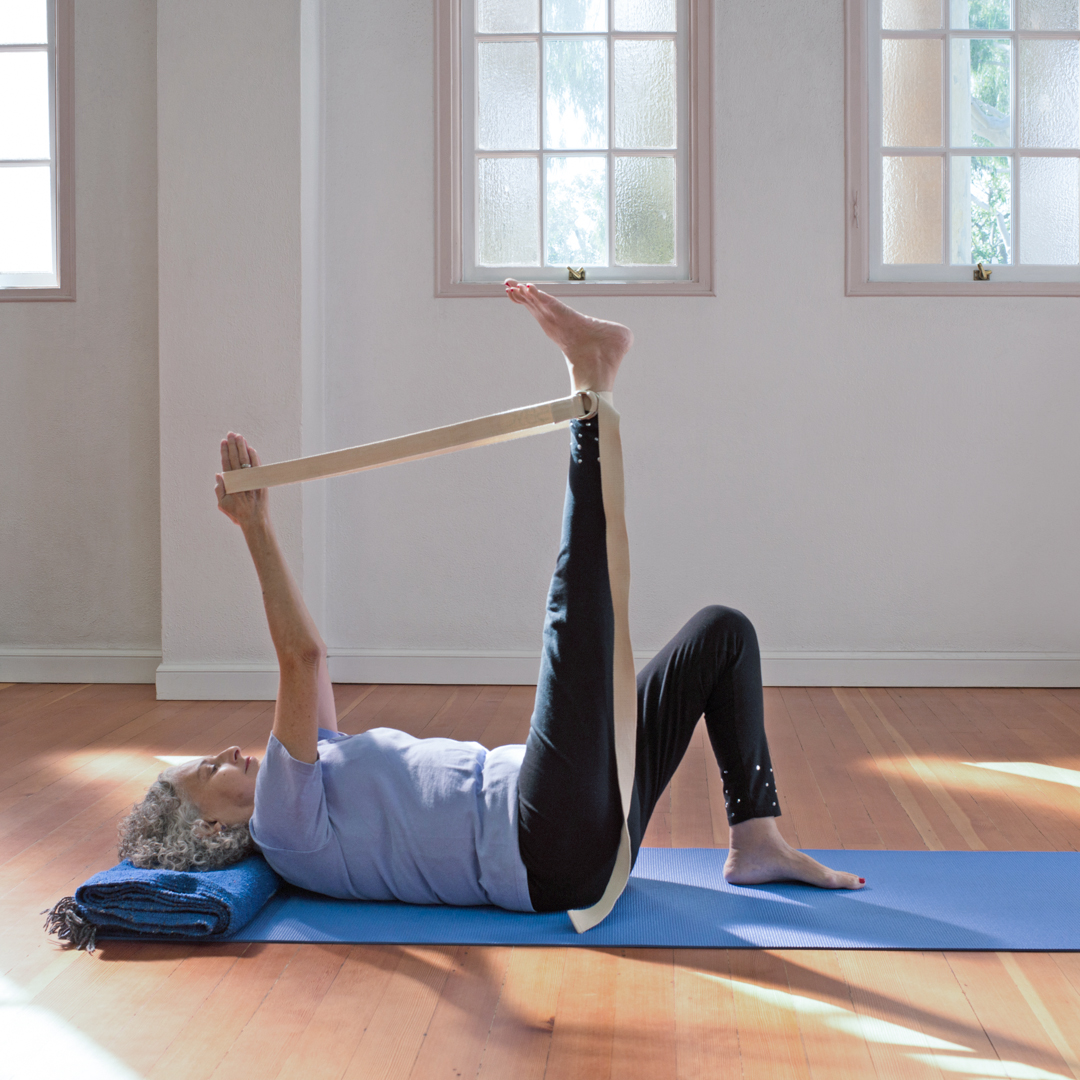 (Seated Forward Bend) Paschimottanasana, forward bending over two extended legs, can be more strenuous for some than others. The symmetry of the pose can be safer for those who have sacroiliac joint issues, but, in general, the stretch can also be more intense than forward bends over one leg. Most of the janu sirsasana variations also apply here, such as using a strap, pressing the feet into a wall or block, or bending the knees and supporting them with a prop. 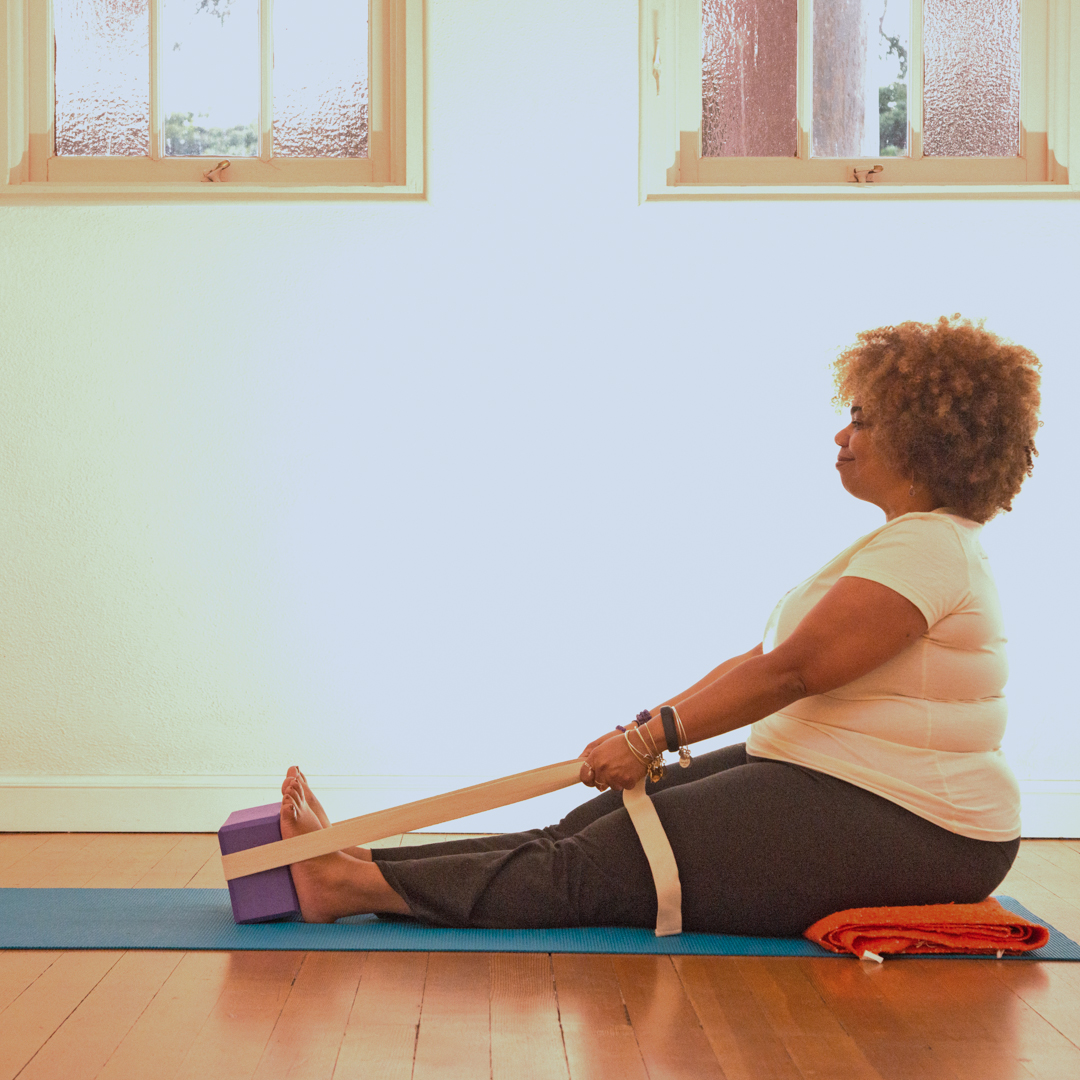 To experience the inward surrender of forward bending in a chair, students can practice a gentle seated version with the feet on the floor. From a seated position, focus on lengthening the spine and neck, and with the hands on the knees hinge forward from the hips. Once the student has come as far forward as possible, they can allow the head to gently relax down. Note that students with arthritis or other spinal conditions need to use caution when relaxing the head down and may prefer to keep the head up. 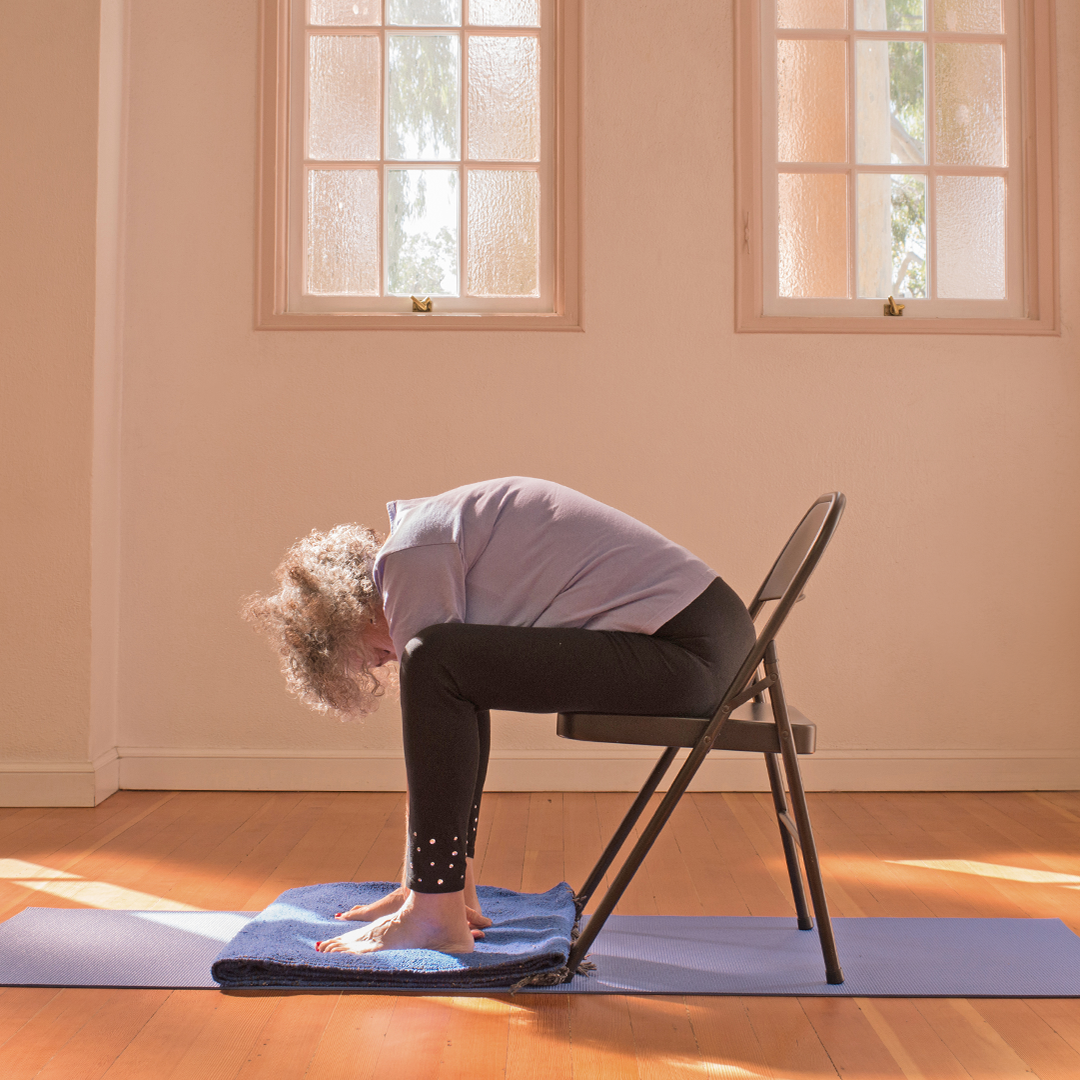 Paschimottanasana can be experienced from a standing position, where it becomes uttanasana. The benefits of this practice include the support of gravity in lengthening the spine and gently encouraging hip rotation. This is especially helpful for students with tight hamstrings. Have students practice with the buttocks against the wall, feet approximately six inches away from the wall. Use a chair or blocks in front of the student so that as they hinge forward at the hips they can easily reach the prop with their hands or forearms. As students come into the forward bend, they can notice the sit bones rising up the wall as they hinge forward. This is a useful cue that can help them connect forward bending with the movement of the pelvis. 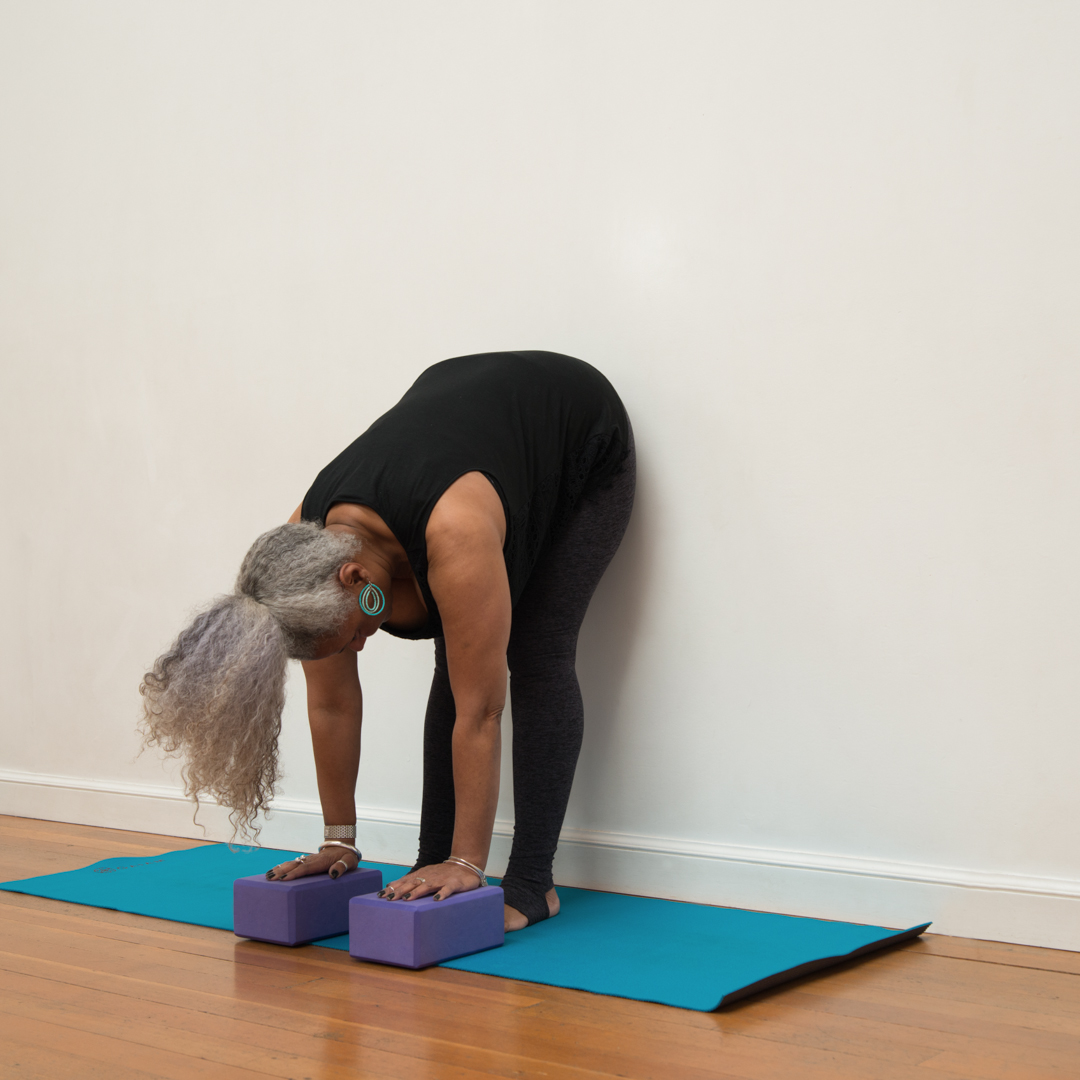 Similarly, a wall downward dog can offer students the experience of hinging at the hips and lengthening the spine in a forward bend, and may be a particularly good option when rounding the spine is contraindicated. In fact, the arm position can support spinal lengthening and discourage rounding in the back, which is typically the more dangerous aspect of forward bending. 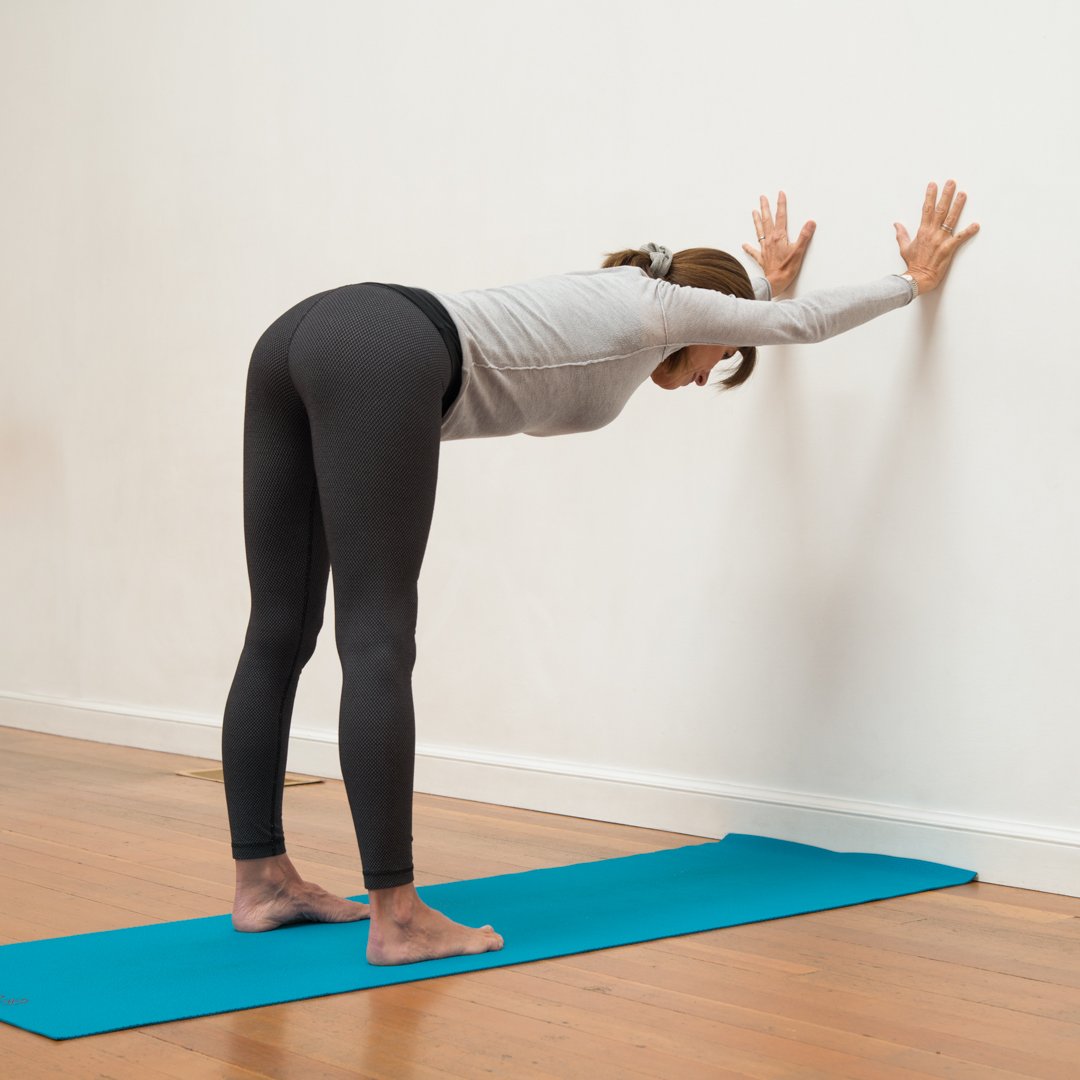 (Wide Angle Pose)Upavistha konasana, seated wide angle pose, is a forward bend plus an inner thigh stretch. Having students focus on pelvic tilt is essential here, as well as bending the knees to accommodate the hamstrings if needed.

Another way to get similar benefits is to practice by standing with the buttocks against the wall and placing the hands or forearms on the seat of a chair in front of you—or holding the back of the chair with your hands and extending your arms. Feet should be parallel to each other. In this pose, gravity assists the lengthening of the hamstrings and the release of the back of the neck. This is a variation of prasarita padottanasana. 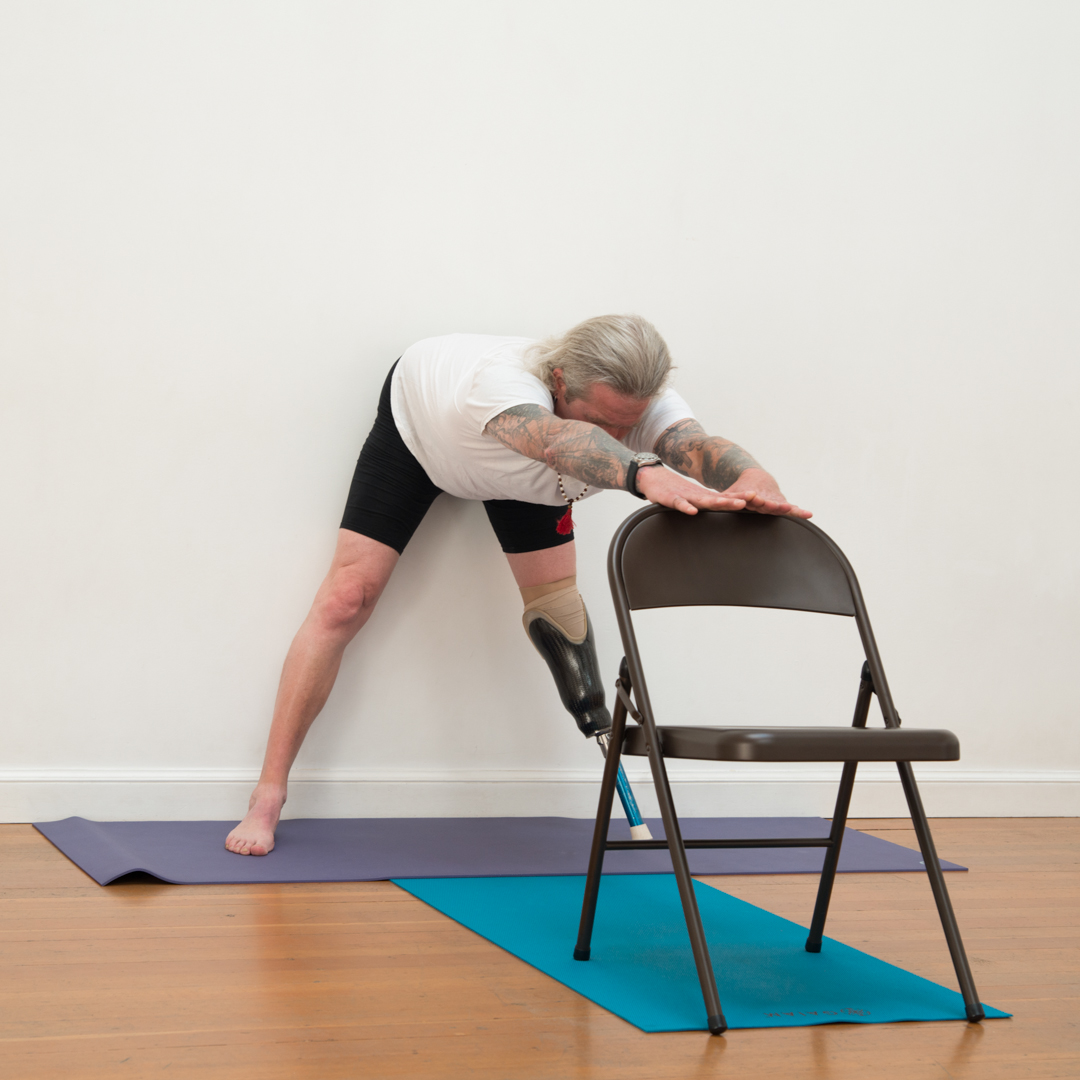 Similarly, from legs up the wall, you can allow the legs to separate and gravity to assist in their opening. As with supta padangusthasana, this variation allows for a hamstring and inner thigh stretch while keeping the spine supported and relaxed. 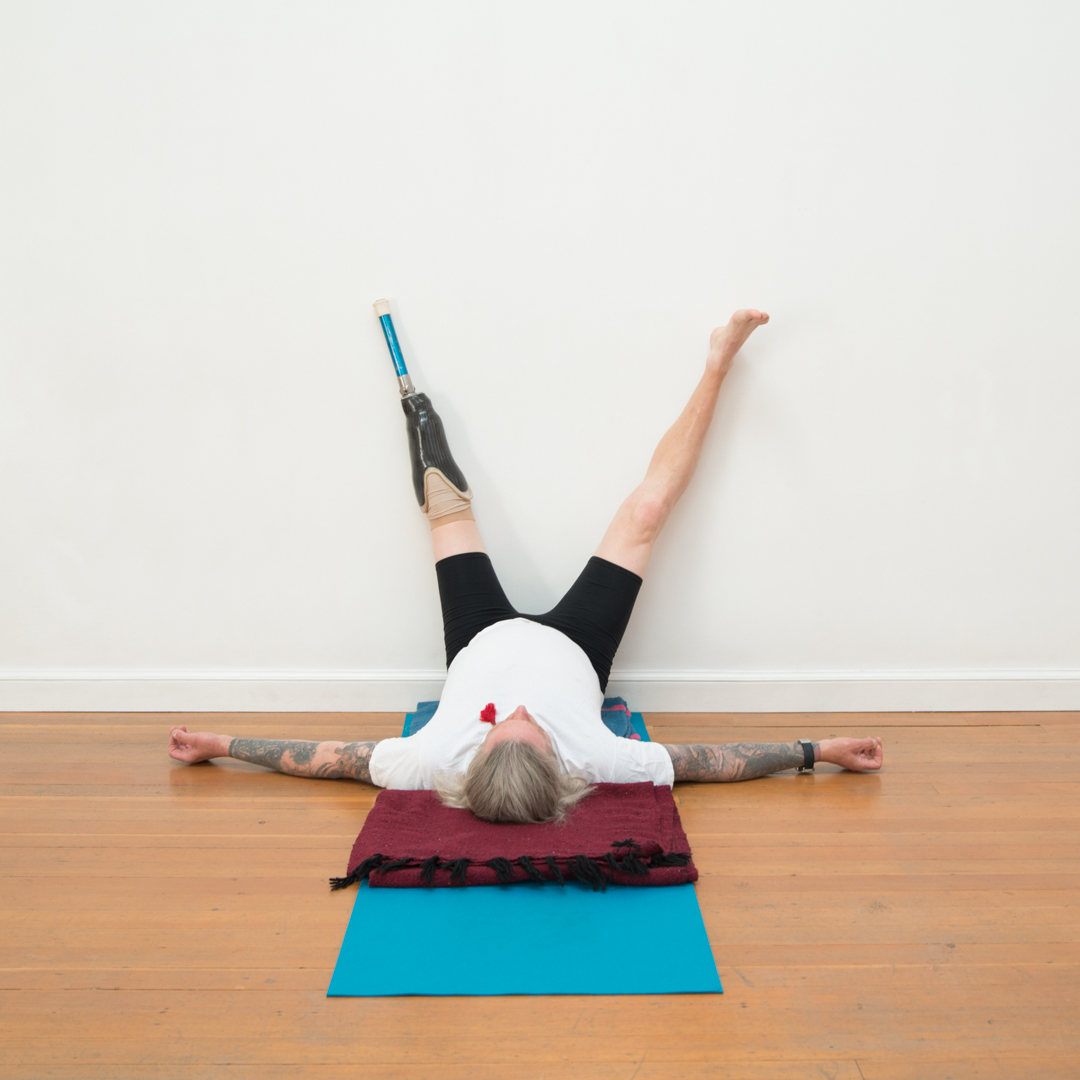 Upavistha konasana can also be practiced by students sitting in a chair. Two additional chairs are needed to support the legs—and make sure that the knees are supported. In fact, bending the knees slightly will facilitate ease in the forward fold and help to avoid hyperextension of the knees. 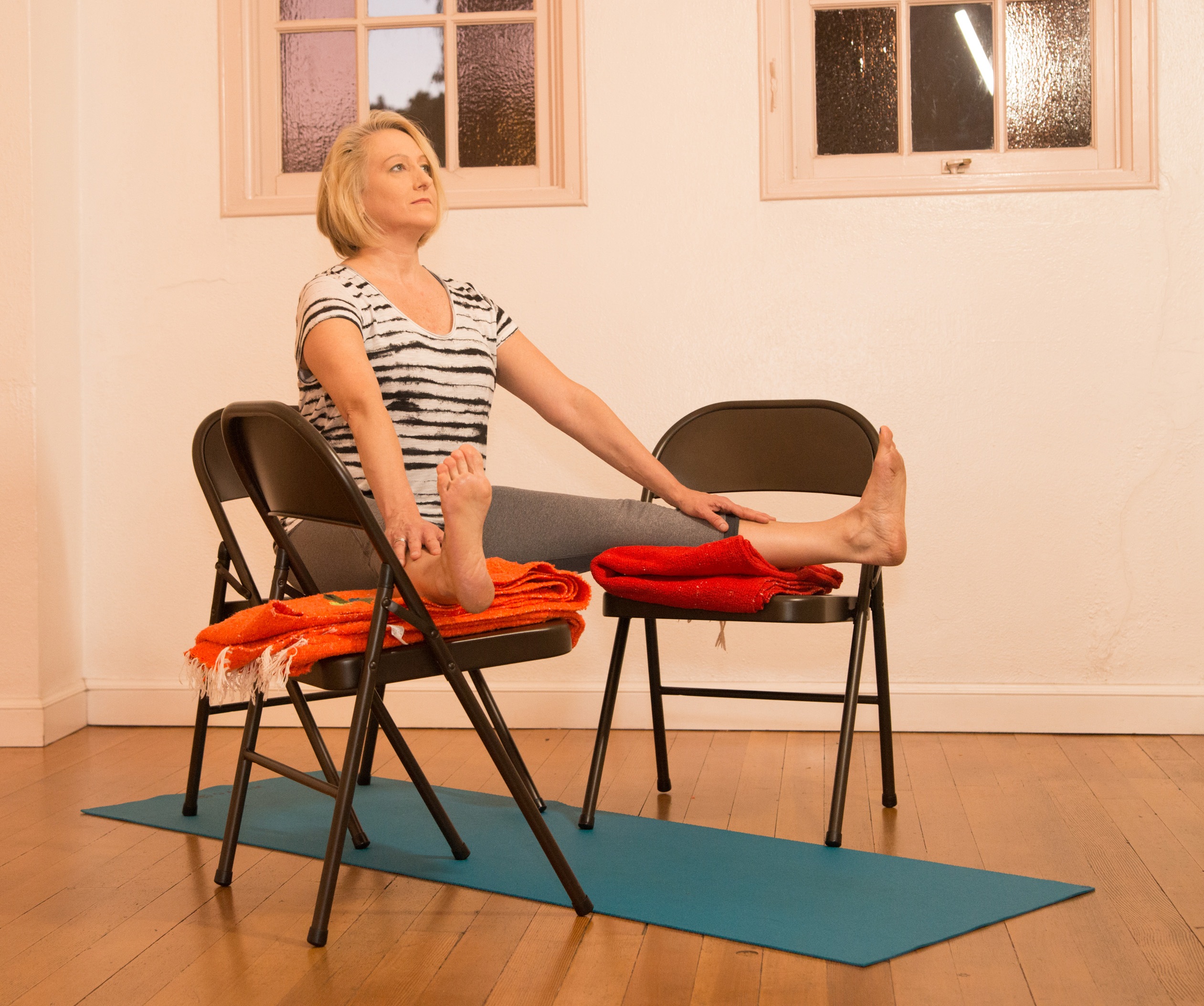 Finding accessible variations of forward bending poses allows people of all abilities an opportunity to experience their profound benefits; to turn inward and connect with themselves.