To Tuck or Not to Tuck the Pelvis?

Before the 1980s, no one really bothered telling tales about yoga students’ tails. The instruction for a posture such as warrior I, as offered in the 1960s classic yoga text Light on Yoga by B.K.S. Iyengar, didn’t mention what to do about the tilt of the pelvis.(1) But by the 1990s there crept into yoga teacher training a common cue that asked students to tuck their tails in a variety of standing postures, such as the warrior poses, mountain pose, chair pose, and even triangle pose. A slight pelvic tuck, also called a posterior tilt, can help to elongate the spine, which is one reason it was prized.

Various ways to ask for a tailbone tuck arose: Students were told to “scoop your tail,” “Drop your sacrum,” or “Draw your belly to your spine and move the top of your hips backward.” Why? The reasoning was that too many students were sticking their tails out in these standing postures, and when a student sticks their tail out (anterior tilting the pelvis), they create too much lordotic (backward) curve in the lumbar spine, which can overstress the joints. Tucking the tail was thought to engage the core muscles, which would protect the lower back.

It is certainly true that a posterior tilt of the pelvis reduces lumbar lordosis, but is pronounced lordosis in a standing pose always a problem? 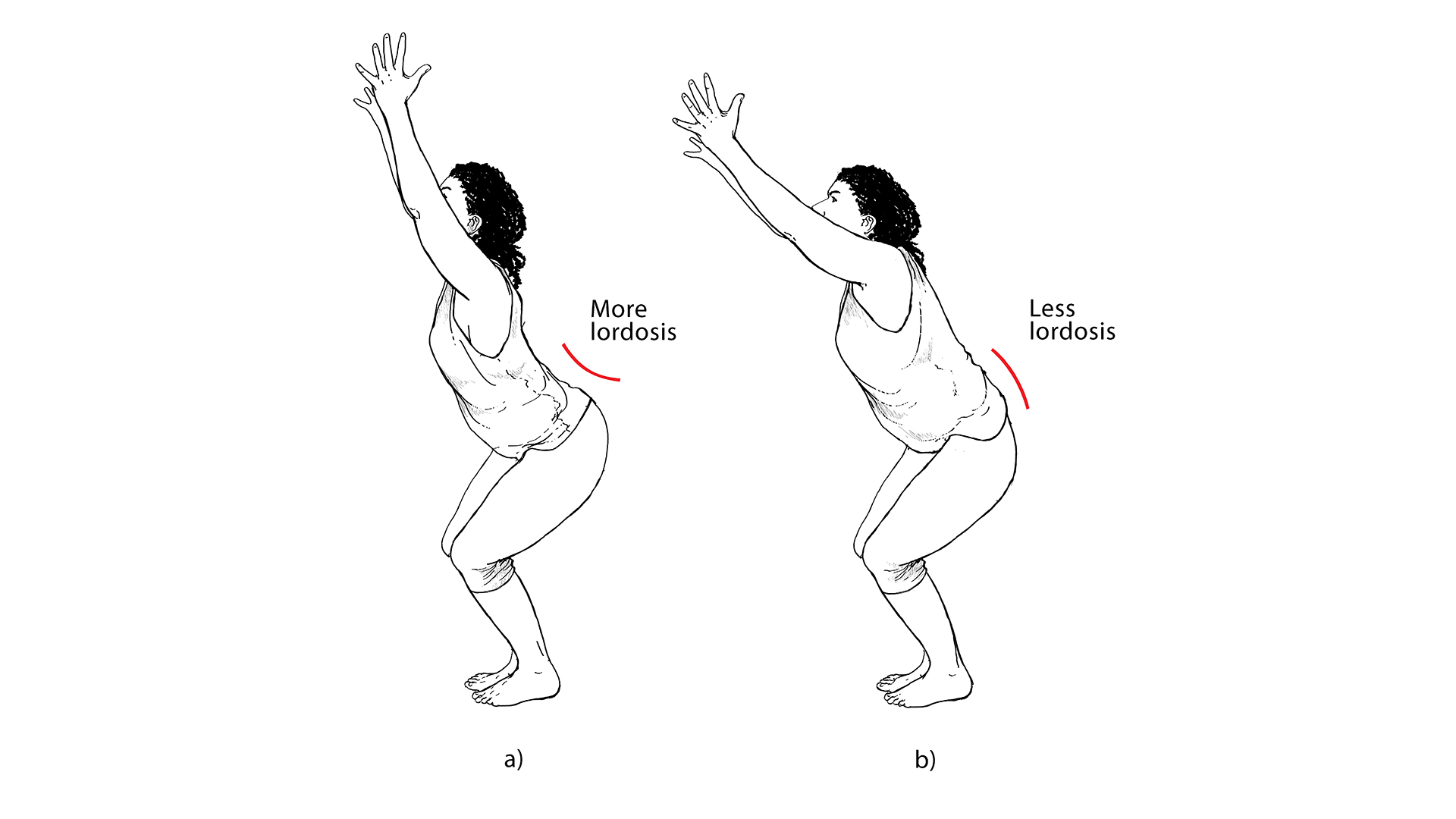 Figure 1: Chair pose (utkatasana) with a pronounced anterior pelvic tilt (a) and with a posterior tilt (b), also called a “pelvic tuck.” Notice the effect on the spine in each variation: An anterior tilt deepens the lordotic curve of the lumbar spine, while a posterior tilt reduces lordosis.

It is interesting to notice that the tail tuck cue came first, and the rationale for the cue was developed in the years that followed. Paul Grilley has noted one reason why this cue became so common: Many yoga teachers in the 1980s and 1990s came to yoga from a dance background. In the dance world, especially in classical ballet, dancers are “taught to tuck their pelvis so they can spin on a straight axis. It is difficult to spin multiple times if the pelvis is not tucked. [Ballet dancers] are also taught to tuck their pelvis so they can maximize their height and the appearance of leg extensions.” (2) What worked in the dance world was assumed to work in the yoga world, even though a trained professional dancer often has a very different body than the average yoga student.

By the late 2000s, the cueing had changed. Teachers had begun to realize that tucking the tail led to too much straightening of the lumbar curve. Having the lumbar too straight can be just as bad as having it too curved. For some people, performing a posterior pelvic tuck can also affect the upper spine and the position of the rib cage, creating a collapsed upper body and constricted breathing. A tucked tail became prohibited in many yoga studios; the pendulum had swung far away from the previous alignment cue. But some teachers felt that perhaps the pendulum had swung too far—“never,” after all, is never right. There are some occasions and some bodies that call for tucking the tail, and others when this tilt should be minimized or avoided altogether.

By the mid 2010s, teachers were offering both options, depending upon the situation. Sometimes they substituted a totally different set of cues that included no mention of the tailbone at all—cues that focused instead on co-contracting the muscles of the pelvis and core, and aligning the thighs, pelvis, lower back, and rib cage. With this core stiffness, stability can be maintained with whatever natural lordotic curve the student may possess. There is no need to change from that neutral spine; just stiffen it.

Anterior tilting of the pelvis can be either an effect of the position of the body and its relationship to gravity or the result of activating particular muscles—the erector spinae (the spinal muscles) pulling the sacrum up and/or the iliacus and quadriceps femoris pulling the front of the pelvis down. 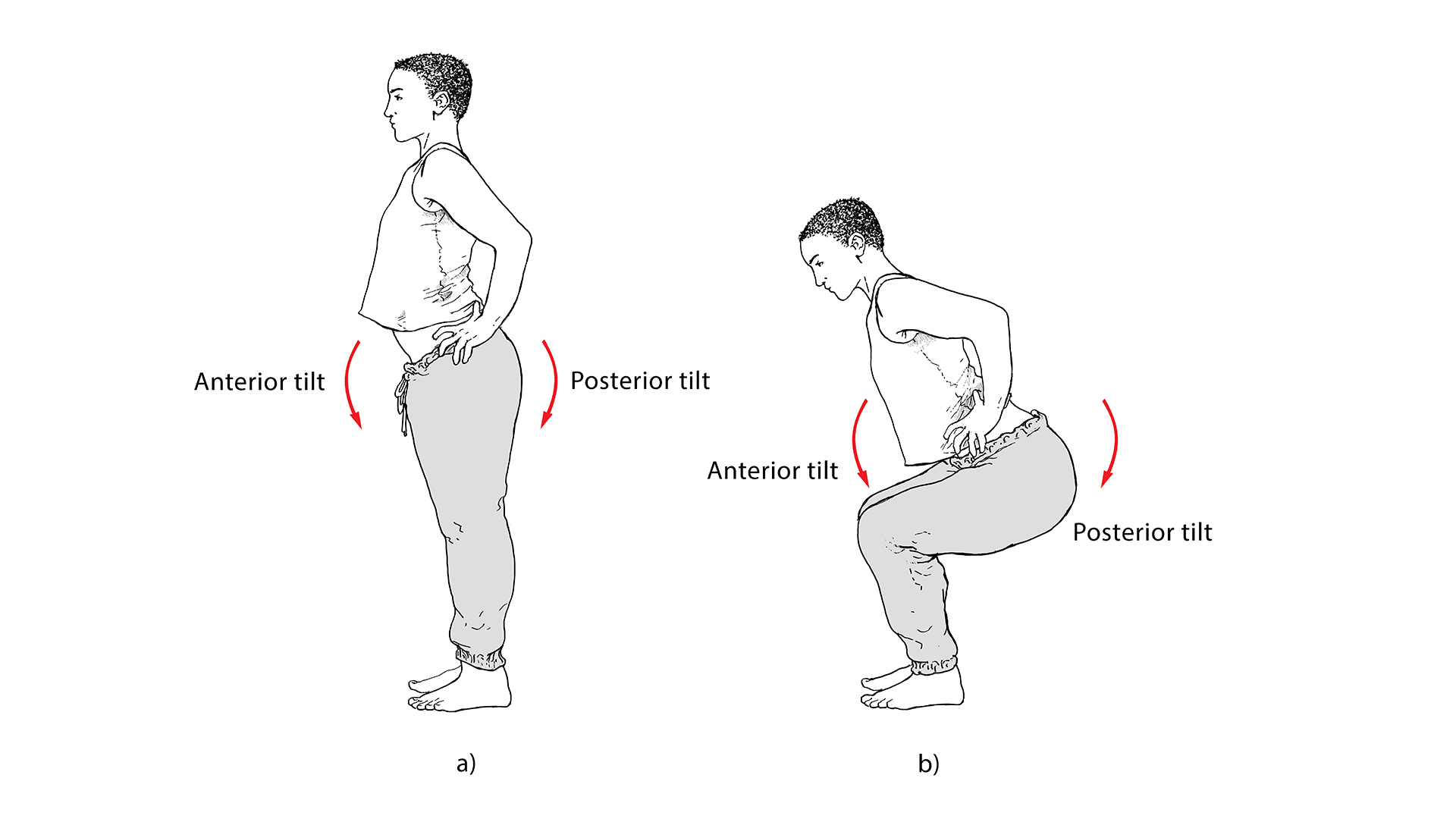 Figure 2:Finding your chair pose: (a) Stand in mountain pose (tadasana) with hands on your hips and experiment by tilting the pelvis forward and backward, until you have found your neutral, solid position. Then, keeping that degree of tilt, sit down into your chair pose. (b) If you still feel safe and solid, stay there. If not, experiment with different degrees of pelvic tilt until you find your chair.

For example, come into mountain pose with your hands at your hips, as shown in figure 2. Try closing your eyes (if it doesn’t make you dizzy), and note the position of your pelvis and lumbar spine. Keep that awareness as you tilt the pelvis forward and backward. As you do this, deliberately engage the specific muscles that create the tilt; for the anterior tilt, feel the top of your thighs pull down and the back muscles pull up. As you create a posterior tilt, feel the front of your belly lift up and the back of your legs pull down. Next, find the position of the pelvis where your spine feels neutral, safe, and solid. Let’s consider that your natural, neutral position. Now, as shown in figure 2b, sit down into the chair pose.

Again, play with this position—tilting the pelvis in both directions by working the same muscles as you did in mountain pose. When any of these positions feel weird and unnatural, don’t stay there; instead, find the position that feels solid and natural for your spine, and stay there. Now enhance your stability by co-contraction: Press your feet into the floor, feel that you are rotating your thighs inward and backward without actually moving them or your feet. You should feel safe, strong, and solid.

Now, did you tuck your tail? Maybe or maybe not. The important thing is to find whatever movement works best for you—because this is your chair.

For more on whether or not to tuck the pelvis, check out this tutorial on our Youtube channel, and don't forget to subscribe!