Why Some People Can Backbend More Easily Than Others

Ever wonder why your yoga teacher can do amazing and graceful backbends, but you get stuck before you even start? The bare bones answer may be the shape of your bones! A great deal of variation exists between lumbar spines, including differences in the number of lumbar vertebrae you may have (anywhere from four to six) and the natural amount of backward curve (called lordosis) you may possess (anywhere from 29° to 69°).

Another key variation that has a dramatic effect on your backbends are your spinous processes. Spinous processes are the bumpy bits of our vertebrae that you can feel when you palpate your spine. Some people have big spinous processes (see figure 1 below) and some rare individuals may have one or two missing completely! 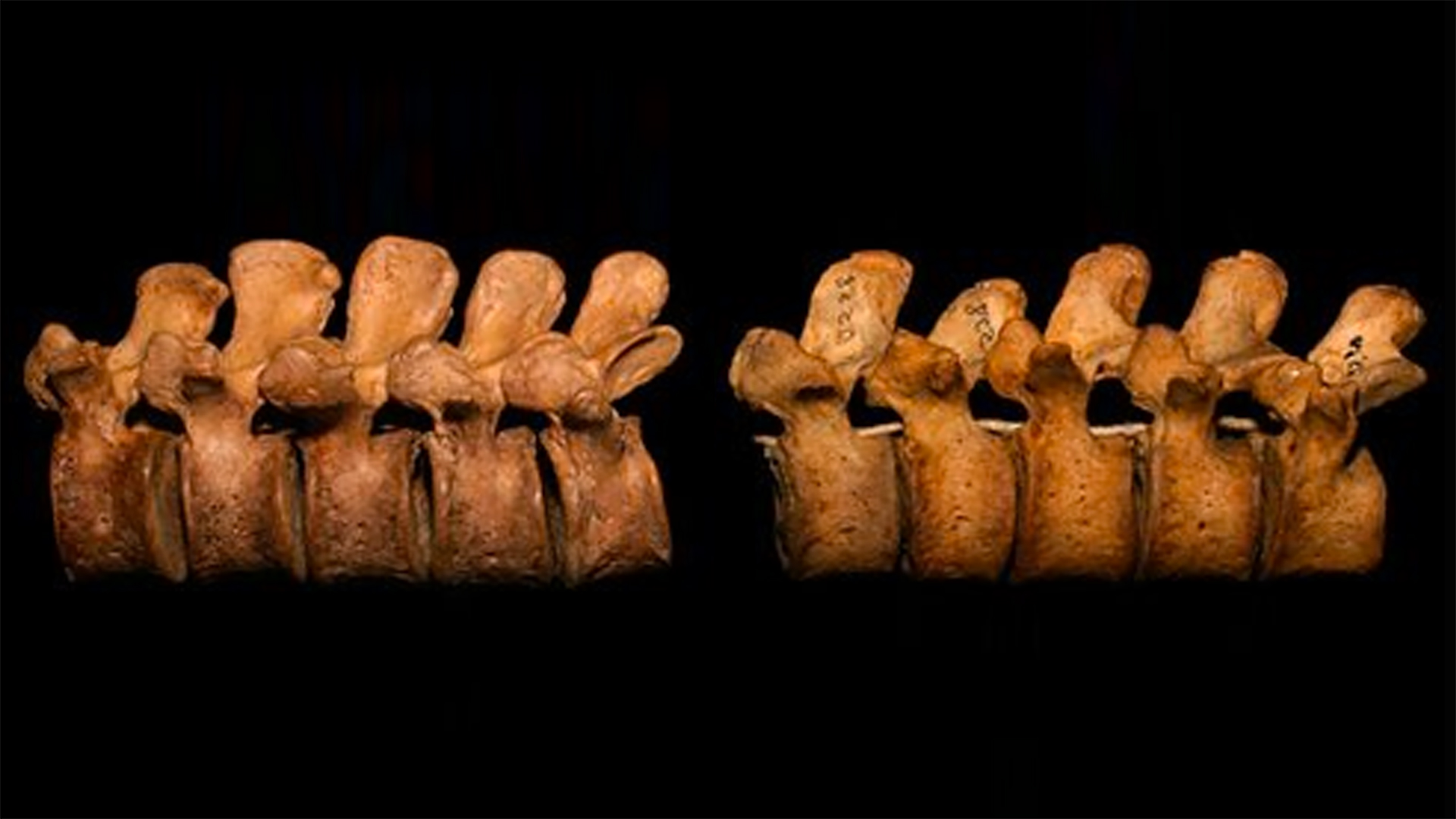 Figure 1 Notice the differences in the shape, size, and orientations of the spinous processes of these two lumbar spines. In each, the first lumbar vertebra (L1) is on the left; the lowest (L5) is to the right. (Image courtesy of .)

Variations in the Spinous Processes

The main movements of the lumbar spine are flexion (forward bending) and extension (backbending). The limits to these movements are usually tension (especially in flexion) and compression (especially in extension). Tension arises due to resistance of our tissues to being stretched and can show up as tight muscles, fascia, and ligaments. In backbends, the spinous processes “kissing” into each other is the main source of compression (although the facet joints may also play a small role). Variations in the size and orientation of the spinous processes are thus very important for how deep we can go into backbending postures. If the spinous processes are shorter, narrower, and angled more horizontally, then there is more space between them and thus more room for extension than there would be if the processes were longer, wider, and angled more inferiorly.

The average length and slope for lumbar vertebrae are shown in table 1 below. The data, from almost 3,000 vertebrae, are averages of men and women. Notice the relatively small standard deviations in the sizes of the processes, but the large standard deviations in the slopes. Small deviations mean that there is a narrow range of variation in a normal population, but large deviations means that many people will be quite different than the average. The large range of slope angles that occur means that some people will naturally be great backbenders, but many others will not be. 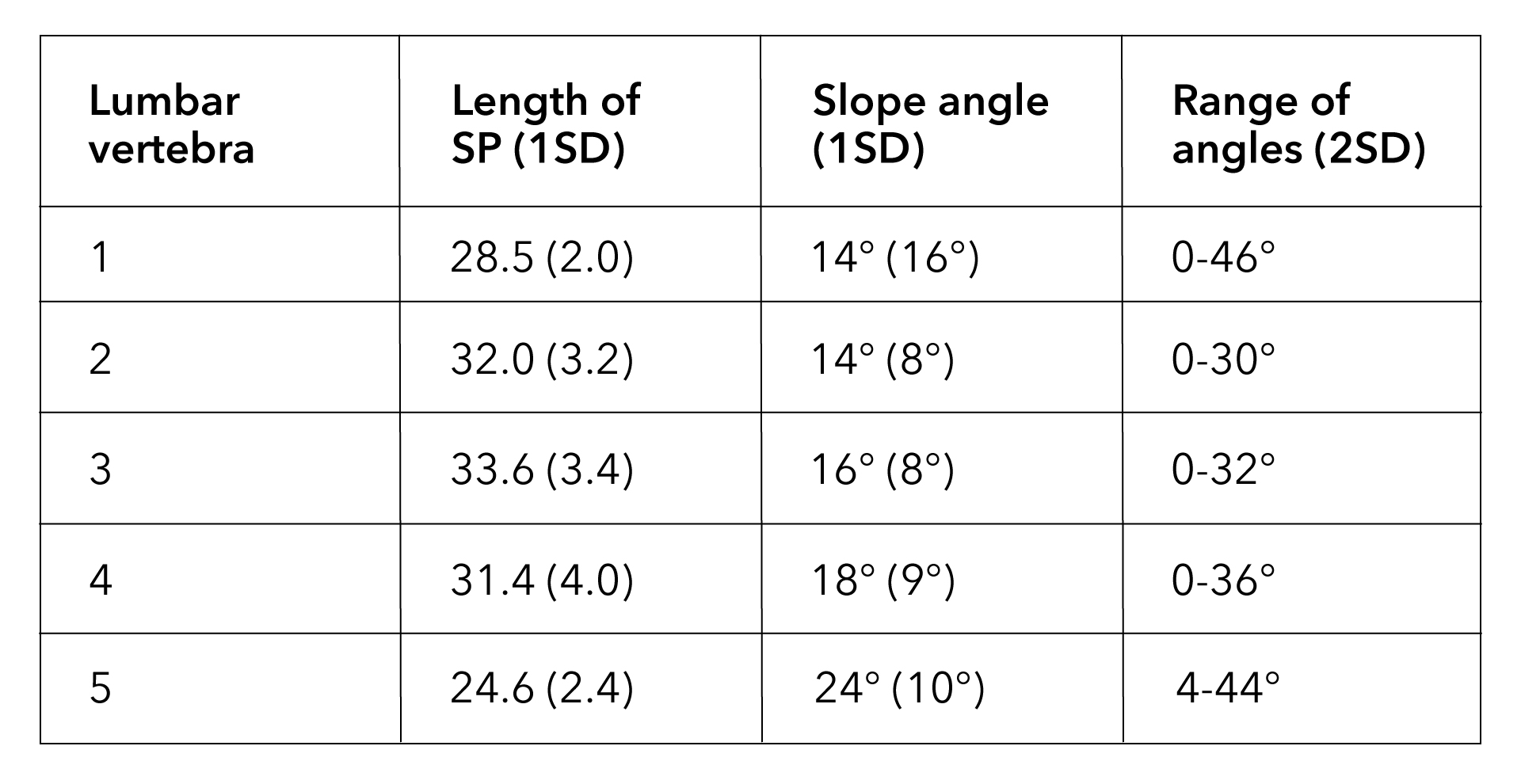 In general, women tend to have steeper slopes but smaller processes than men; however, this may simply be due to women having smaller bodies, on average. There are variations by ethnic background, with people of European descent tending to have longer and more horizontal spinous processes compared to people of African descent. Interestingly, the spinous processes tend to grow longer with age, implying that we lose our backbending abilities as we get older, and that is normal.(1) 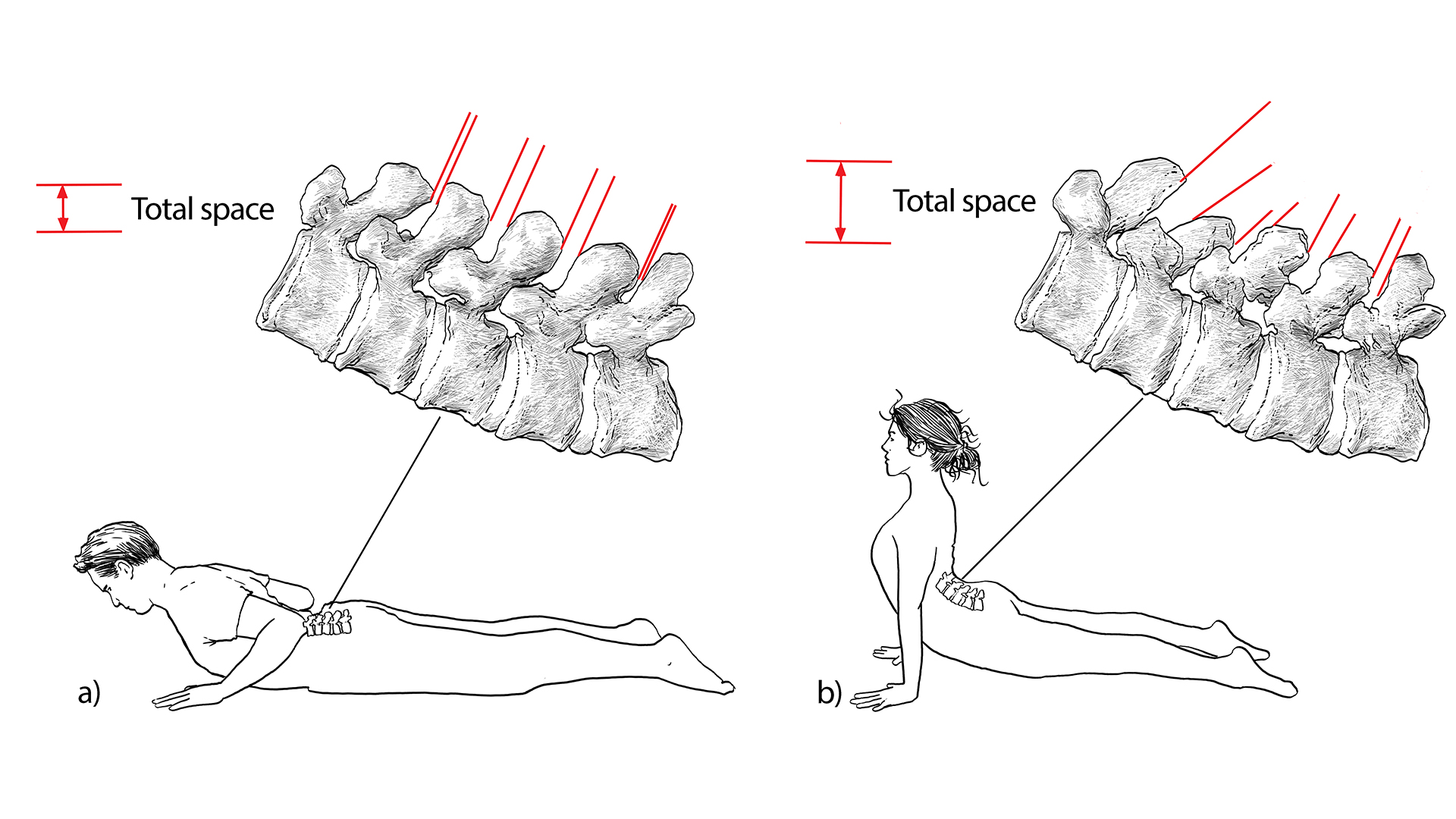 Figure 2: Notice the spaces between neighboring spinous processes. Student (a) has far less room to extend his spine than student (b). Yoga will not change this!

Imagine the students who possess the lumbar spines shown in figure 1 doing cobra pose as shown in figure 2 (above). There is no way they can backbend the same! Notice the spaces between the spinous processes. As shown, the student on the right has large gaps between each pair of processes; the student on the left has very small gaps. Indeed, between L4 and L5 there is no gap at all. His processes are already kissing, so there is no room for any extension at this joint. But this need not disqualify him from moving to his natural limits or from doing his yoga practice with attention and intention.

Of course, tension in other tissues may preclude the full extension available at any given moment, but once those tensile restrictions have been worked through, the spine will extend until compression is reached. Women, on average, have much more space between adjacent spinous processes than men,(2) which contributes to their greater range of extension and increased lordosis.(3)

Notice in figure 1 that the slopes of each process are different. Table 1 shows big differences in slope values between vertebrae and between people; the range of slope values is very large, as shown by the large standard deviations. This means that some people may have very little or no slope in their lumbar spinous processes but others may have a considerable slope. In general, and despite their greater range of extension, women have greater slopes to their lumbar spinous processes than men.

Also, note the length of the L2 spinous process of the right lumbar in figure 1: It is much shorter than all the others. In most anatomy books you will find drawings of the spine that show all the spinous processes having similar lengths. This depicts the average situation, but not the reality for every body. One study showed that women’s lumbar spinous process lengths varied from 7.6 mm to 28.4 mm, almost a four-fold difference! For men the range was from 8.9 mm to 33.5 mm.(4) All other things being equal, shorter processes allow for more movement than longer ones.

How far you can bend backward will at first depend upon how much tensile resistance you have in your tissues: Tight abdominal muscles and hip flexors, for example, can limit spinal extension. But, eventually, after you have worked through the tension along the front of your body, you will be stopped when your bones compress together. That will be the limit for how far you will ever be able to go. What do you feel when you do a backbend? Compression in the spine? If so, accept that you have reached your limit and be happy to stay there.

An interesting illusion arises from variations in the length of our spinous processes: A student can appear to have more or less natural back curve (lordosis) in the lower back if the spinous processes are shorter or longer. Figure 3 below illustrates this. Both clinicians and yoga teachers have to be aware that when we think a patient or student is hypolordotic, it may be that they actually have a normal amount of lordosis, but their spinous processes are much longer than normal. Beware of generalizations regarding hyper- or hypolordosis based solely on appearance. 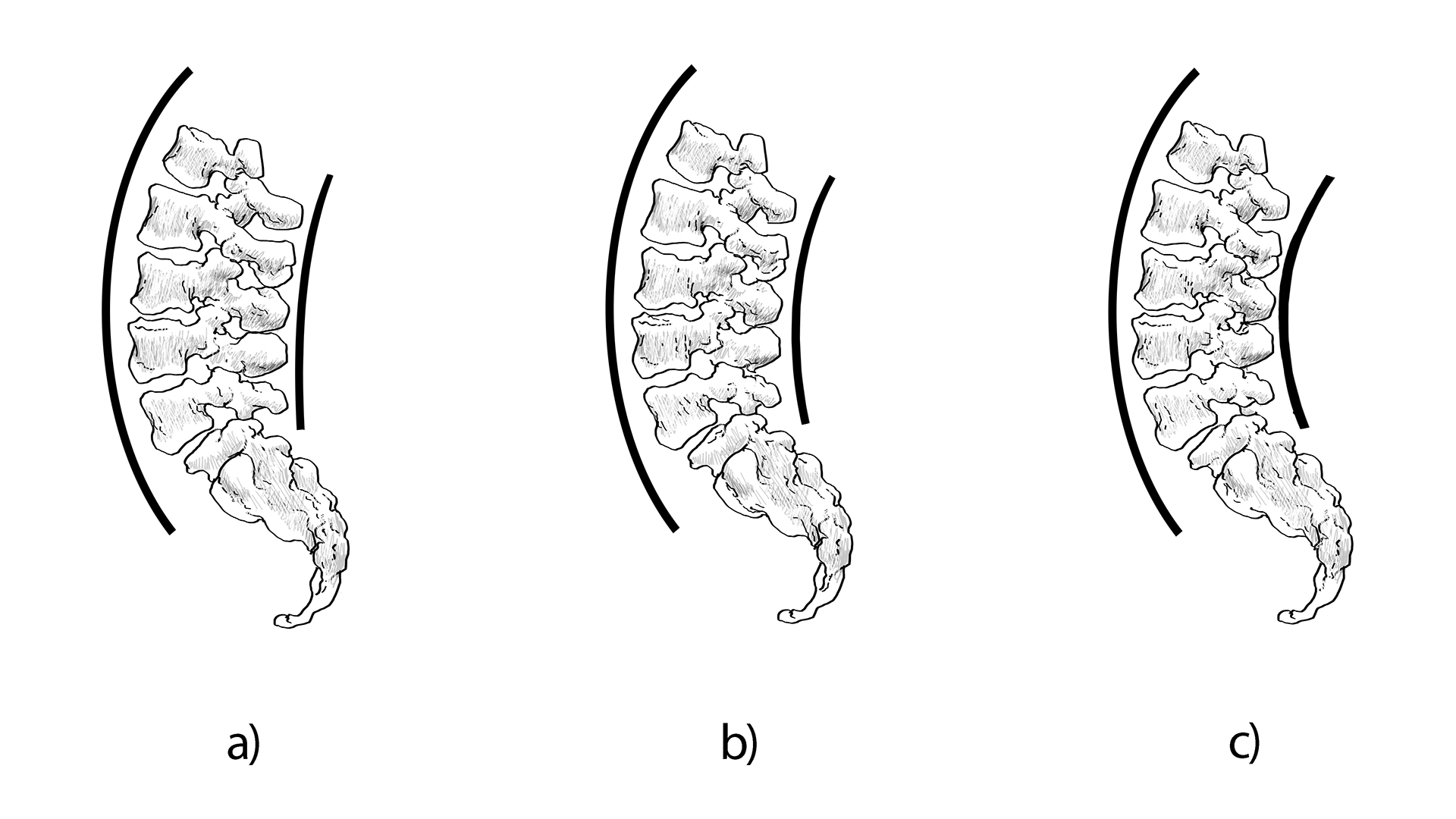 Figure 3: Looks can be deceiving! The amount of lordosis we possess can be masked by the length of the spinous processes: (a) shows a lumbar spine with longer spinous processes, (b) has processes with normal lengths, while (c) shows much shorter than normal lengths. In all three cases, the arch at the front of the spine indicating the true lordosis is identical, but the curve at the back of the spine seems very different, with (a) showing little lordotic curve and (c) showing much more.

2. See B. Cai et al., “A Morphometric Study of the Lumbar Spinous Process in the Chinese Population,” Brazilian Journal of Medical and Biological Research 48.1 (2015): 91–5.