Your Spine, Your Yoga

The job of the human spine is primarily to safely transmit loads between the upper body and the lower body and secondarily to freely allow movement. Notice the order just presented: Transmitting load or stress is more important than allowing movement. So often in yoga classes, these are reversed and mobility is prized ahead of stability.

In an upright biped, the spine must be strong enough to deal with the weight of the upper body pressing down onto the lower body. The spines of animals that walk on all four limbs do not have to continually bear this load; their spines can more easily focus on mobility. Our spine’s foremost priority is stability and it is most stable when in its neutral position; it is least stable when furthest away from its neutral position.

Where Is the Neutral Spine? 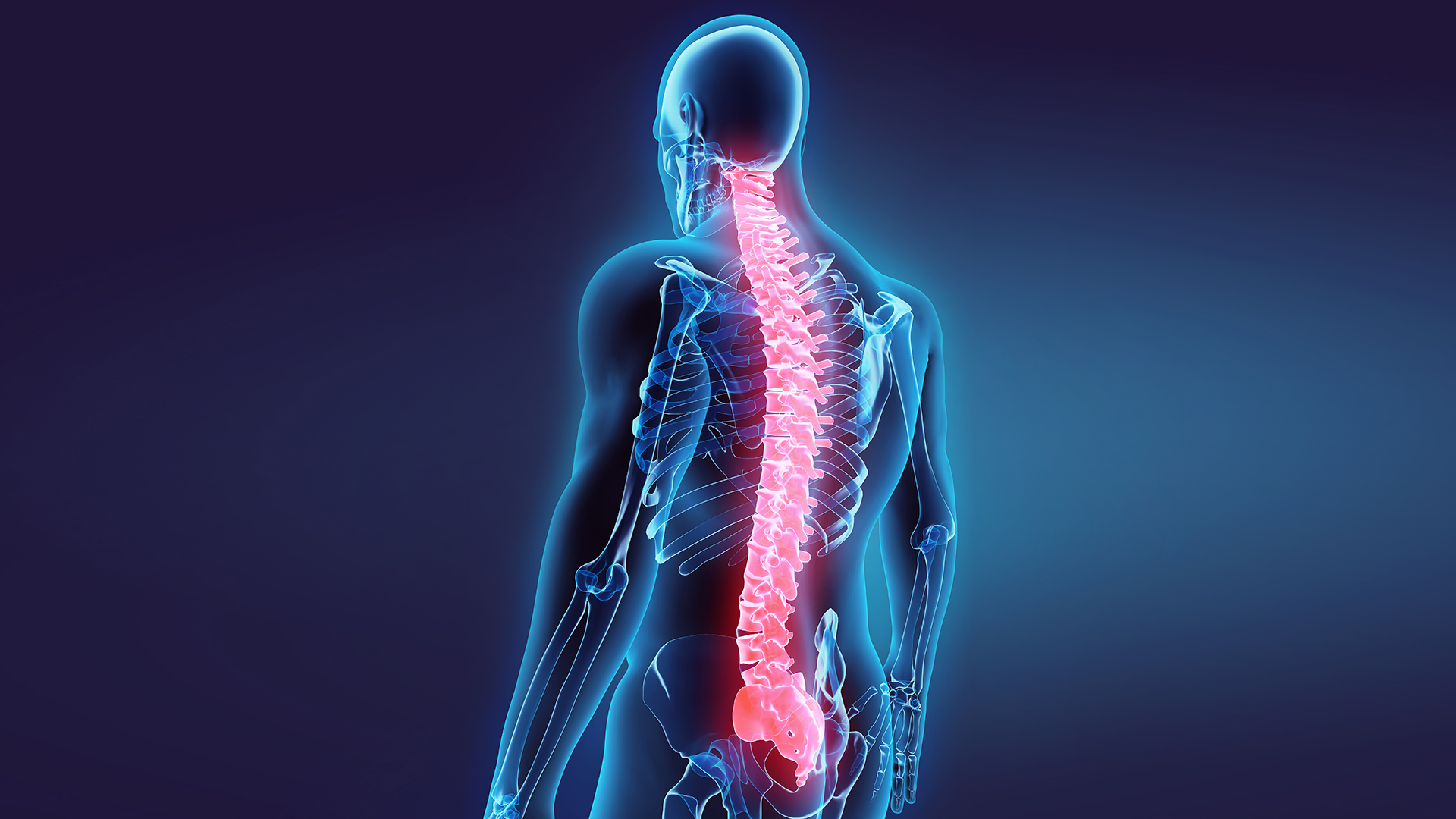 If the spine were a straight rod, it would be easy to see when there was too much or too little curvature in it: Any deviation would take the spine away from its straight position. But what is neutral for a spine that is already curved? How much curvature is too much? How much is too little? According to spine biomechanic Stuart McGill, a neutral spine is “the position where the spine is most relaxed and free of joint tensions that are created as the joints are bent away from neutral.”(1)

When you stand in mountain pose (tadasana), can you find the position for your spine that has the least amount of tension? If so, that is likely your neutral position. Unfortunately, chronically poor posture can also feel relaxed, but there may be a lot of stress seeping into the connective tissues because the muscles have lost their tone. When the muscles are weak, the fascia has to do the job of the muscles. When you pay attention to the tension in your spine, you need to notice not just muscular tension, but also the stresses in your joints and fascia. That’s easy to say, but it takes some practice. You may have to experiment—try different postures and check out how each position of your spine feels. Where do you feel free, light, long, yet relaxed? That is probably your neutral position. If this experimentation still doesn’t work, use a mirror or the eyes of a qualified teacher to help you discover your neutral spine.

The distance between a neutral spine and the position farthest away from neutral is a measure of a spine’s flexibility. A spine is least able to bear loads or stresses when it is farthest from its neutral position and most able to bear these loads when it is close to or in neutral.

In the yoga world, we often mix up these two abilities of our spine and put enhanced movement ahead of stability. We admire deep, sweeping backbends and twists—they look cool. Who doesn’t love a yogi who can gracefully drop back into wheel pose (urdhva dhanurasana) and grab her ankles? But for the majority of spines, attempting to gain such dramatic ranges of motion comes at a steep cost: injury and trauma through continued overstressing of the joints of the spine when it’s near its maximum range of motion. Because stability is more important than mobility, it is important to give two clear guidelines for working with the spine:

1. When the spine is bearing a load, keep it as close to neutral as possible, stiffen it and limit its movement.

2. To enhance range of motion, unload the spine.

Another way of saying this is, when under stress, stiffen; when enhancing movement, unload. It is fine to have deep backbends and twists if your spine allows such movements, as long as the spine is not also subjected to a lot of stress.

An example of subjecting the spine to a large load while moving it through a large range of motion is the version of camel pose (ustrasana—see figure 3c below) with the hands extended overhead. This camel requires the spine to bear the full weight of the upper body while extending dramatically, creating a lot of sheer stress across the lower vertebral joints. This posture contravenes our first principle: When the spine is bearing a load (in this case, supporting the whole leveraged weight of the upper body), don’t move it very much.(2)

Notice versions (a) and (b) of camel pose: Here the student has her hands on the floor or on her heels. Now the spine is not bearing all the weight of the upper body and the sheer stress is greatly reduced. These are much safer approaches to the pose because they follow the second principle: Reduce the load on the spine when it is in extension.

When you fully understand these principles, the way you practice postures may change dramatically. 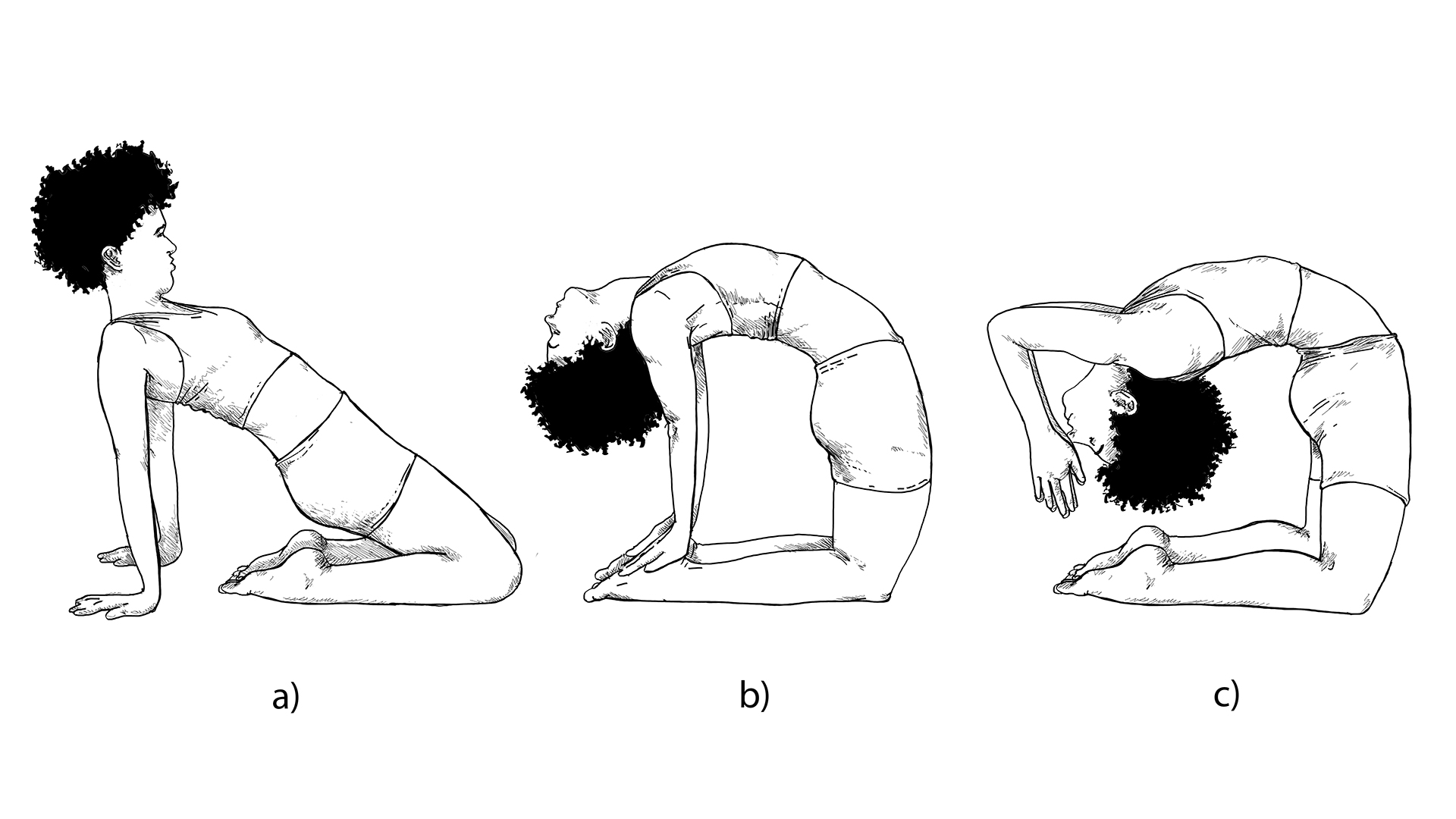 FIGURE 3:Camel pose can be performed with minimal stress on the spine, as shown in (a), or by allowing a deeper degree of backbending but with the weight of the upper body supported by the arms, as shown in (b), or by having a very large stress on the spine while it is experiencing a deep extension, as shown in (c). Depending upon your spine, any of these positions may not be a very good place to be, but (c) will definitely be the riskiest.

Variations of the Spine

While the average yogi has 24 mobile vertebrae,(3) not everyone is average. Most people have 12 ribs, but some have 13 ribs and 13 thoracic vertebrae, and a few have only 11 ribs and thus only 11 thoracic vertebrae. Most people have five lumbar vertebrae, but some have only four, while others have six. Some have four sacral vertebrae and some have six. Some have three coccygeal bones, while others have five. Fortunately, we can rely on the fact that the cervical spine has seven and only seven vertebrae, which is the same number for all mammals (even the giraffe!). But hearing about averages or seeing drawings in an anatomy textbook can trick us into thinking we all have 12 thoracic and five lumbar vertebrae when, as we have seen, we may not. How many you actually have may affect your yoga practice and your spine’s natural range of motion. Table 1 below shows how frequently these variations may occur. 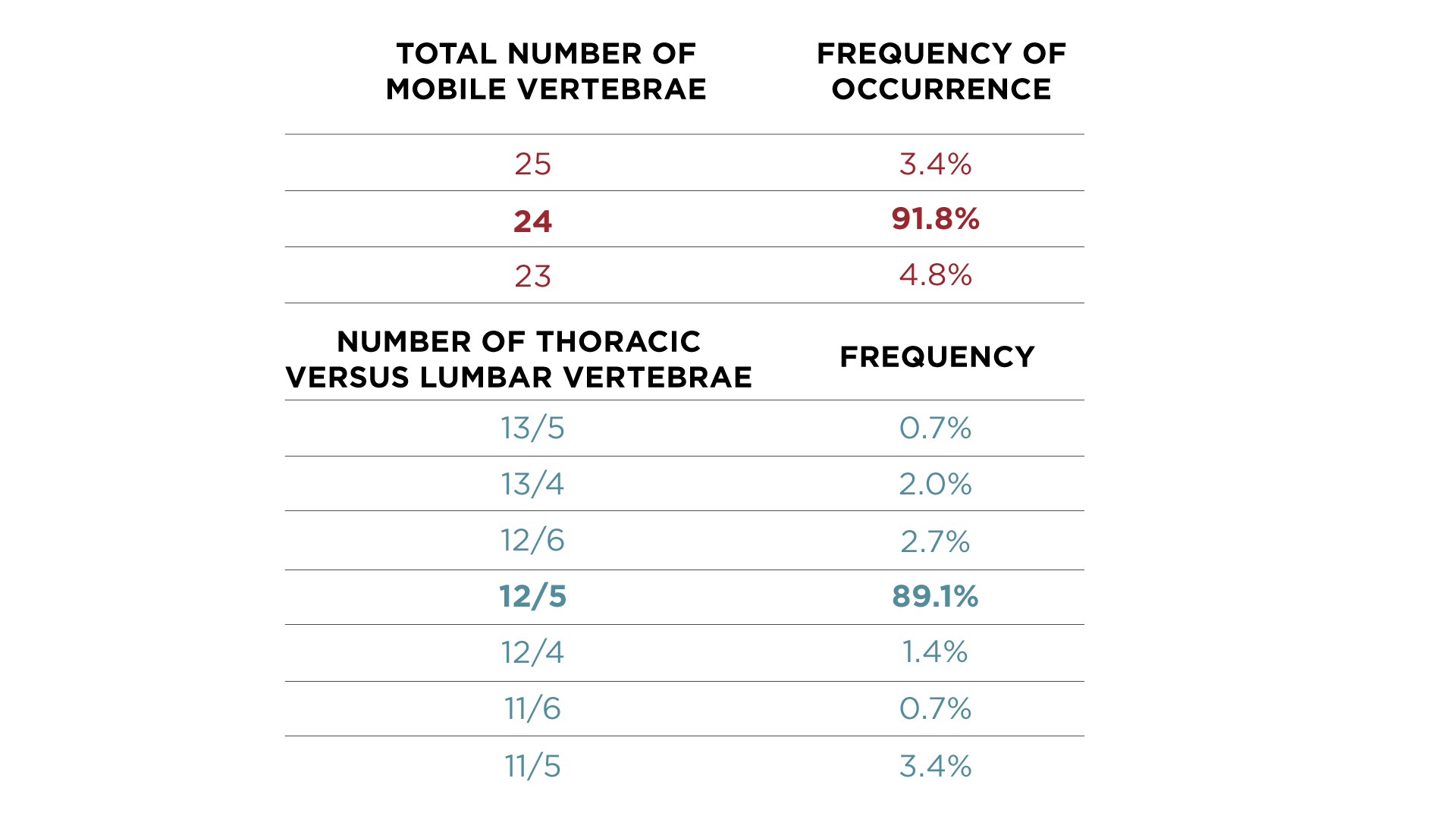 TABLE 1: The relative frequencies of spinal variations, with the average occurrences shown in bold. The figures in red show the total number of mobile vertebrae above the sacrum, while the numbers in blue show the possible combinations of thoracic and lumbar vertebrae.

About one person in a yoga class of 30 has one more vertebra in their spines than normal; about one person in a class of 20 has one less vertebra than normal. It is not clear whether having more or less vertebrae will help a person be more or less flexible; that will depend upon where the extra one is or where one is missing, and upon the shape of the extra vertebrae. (We will look at the effects of vertebral shape variations on your range of motion in a future excerpt.) However, we can speculate that since the lumbar spine is better able to extend and flex than the thoracic spine, having an extra lumbar vertebra may allow a greater range of motion in flexion and extension postures than is normal. However, since the lumbar vertebrae do not twist as well as the thoracic, having an extra lumbar vertebra at the expense of a missing thoracic vertebra may reduce twisting range of motion.

Your Spine, Your Yoga

In a world that admires aesthetics, large, sweeping backbends and other extreme movements of the spine strike us as desirable and admirable. However, if we change our focus to regaining and maintaining optimal health, rather than seeking maximum performance and flexibility, then a functional view of our yoga practice is required. More is not better; we do not need huge ranges of motion or lots of spinal flexibility to be healthy. Indeed, in many cases more spinal flexibility can definitely be unhealthy.

You are unique, and no one else has your  biography or your biology. This means that not all spine exercises, yoga postures, or cautions work for you. Sweeping generalizations, such as “Everyone must bend their knees when they do a forward fold to protect their lower back,” do not apply to everyone—some people are okay with straight legs while folding forward, while many people are not! Given the wide range of human variation, the challenge is to learn which movements and exercises work best for your body; what works for another body can serve only as guidance, not as direction or dogma.

2. Certainly, many yoga teachers will advise a student performing an unsupported backbend, such as the version of camel shown in figure 3c, to “engage your core” in an attempt  to protect the spine. However, when the back muscles are working hard, they also create compressive axial stress along the vertebral joints. This will compress the discs and can be just as harmful for the spine as too little muscular contraction. The unsupported camel posture is a high-risk, low-reward pose, and there are likely few health benefits in doing it. Some individuals are at little risk from this pose, but for the vast majority of people, there are better ways than this posture to build flexibility in the spine and strength in the core.

3. These are often referred to as pre-sacral vertebrae, which means the vertebrae above the sacrum.