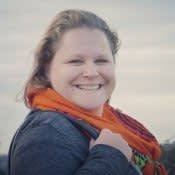 Lisa Kazmer grew up in upstate New York and after completing her BFA in Modern Dance from The University of The Arts in Philadelphia she moved to New York City where she received her yoga teacher training from Cyndi Lee’s OM Yoga Center. Lisa is a Prenatal Yoga teacher and a DONA trained Birth Doula. She began teaching yoga in 2007 and since then has made three yoga-focused trips to India; the first in 2009 to study Ashtanga Yoga and Yoga Philosophy in Mysore and subsequent trips to study Iyengar...(show full bio)