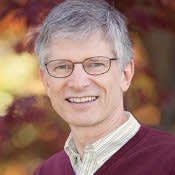 President and Spiritual Director of the Himalayan Institute and a clinical psychologist in private practice, Rolf Sovik has studied yoga in the United States, India, and Nepal. He holds degrees in philosophy, music, Eastern studies, and clinical psychology. Former Co-Director of the Himalayan Institute of Buffalo, NY he began his practice of yoga in 1972, and was initiated as a pandit in the Himalayan tradition in 1987. He is the author of Moving Inward, co-author of the award-winning Yoga: Mastering...(show full bio)