Different yoga teachers often express dramatically divergent views on the ideal position of the pelvis in neutral-spine poses such as mountain pose. Which pelvic tilt—anterior (forward) or posterior (backward)—is optimal?

Bill Reif, a physical therapist in Atlanta with nearly forty years’ experience, and author of The Back Pain Secret: The Real Cause of Women’s Back Pain and How to Treat It, understands the confusion. “It’s very difficult to come up with absolute rules,” he says. “The answer has a lot to do with the body type, the level of the student, and their lifestyle. Some students benefit from anterior or posterior bias.”

In other words, the pelvic tilt that we instruct and aspire to in a pose like mountain might vary according to individual needs. New mothers, for example, might need to tilt the pelvis in a somewhat different way than middle-aged men do. Below, Reif helps explain what the “ideal” position of the pelvis is in a neutral-spine pose, and how to begin to move ourselves, and our diverse students, in that direction—and why “tucking” is never the best way to get us there.

Many yoga schools teach that a neutral or ideally positioned pelvis in poses like mountain is “an upright bowl”—with the frontal hip bones (anterior superior iliac spine, ASIS) and the pubic bone equally far forward—or they emphasize a wheeling action by which the tailbone tucks and the frontal hip bones lift toward the lowest ribs. For many students, however, moving the pelvis into this position will flatten the curve in the lower back.

“A slight lumbar (lower back) curve is normal and desirable, and protects the spine from potentially painful stresses,” says Reif. “The pelvis that supports this lower back curve is necessarily at a slight anterior tilt. A neutral pelvis is slightly forward-tilted, perhaps 8 to 15 degrees for beginners, and by as much as 30 degrees for more experienced students with a greater range of motion. An anterior pelvic angle of 40 degrees is generally considered excessive and will produce a lumbar curve that is also extreme.” (One way to calculate pelvic tilt is by finding the angle between the ground and a line drawn between the anterior superior iliac spine (ASIS) and the posterior superior iliac spine (PSIS) of the pelvis.) 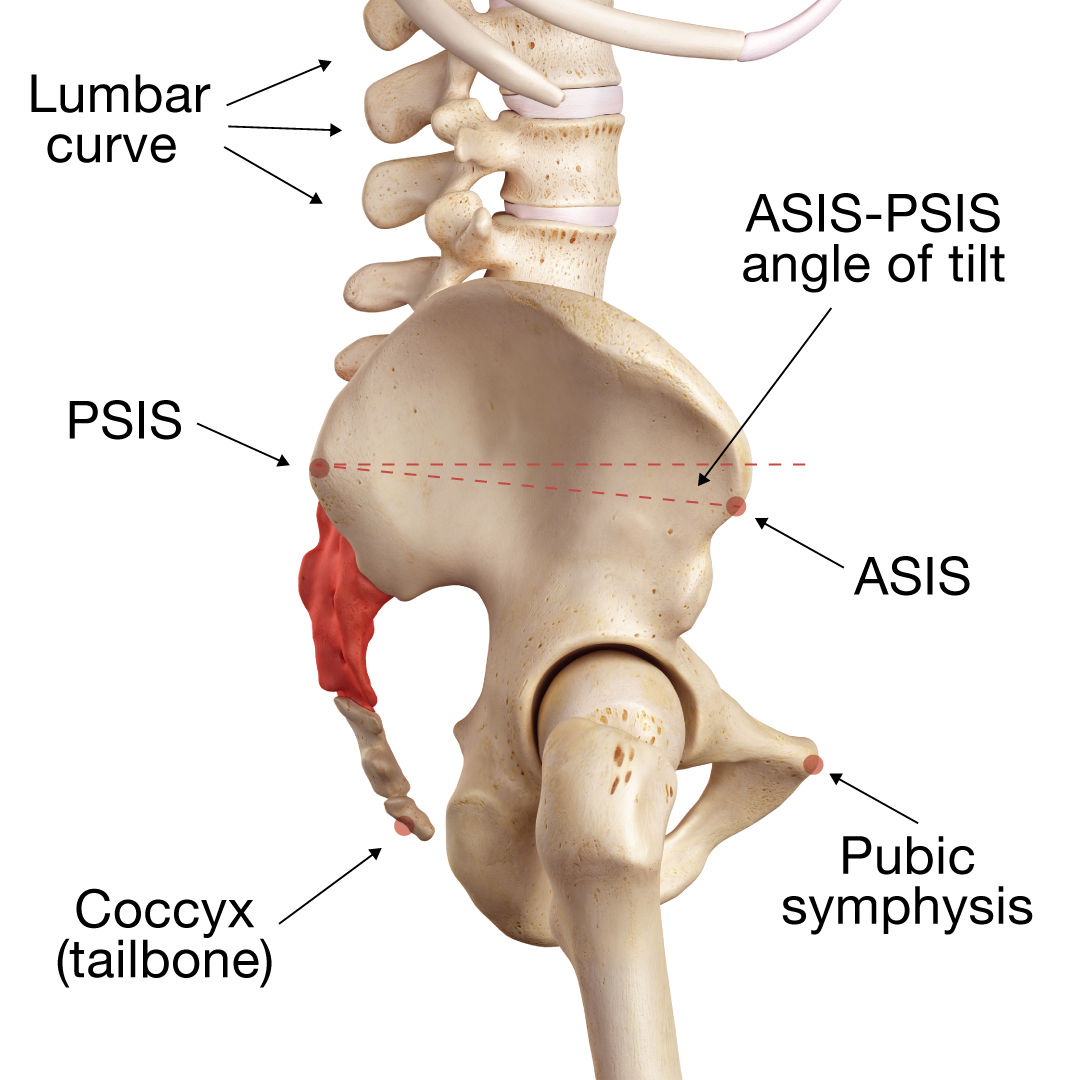 However, because neutral pelvic and lumbar positioning varies for every person, Reif encourages us not to get too caught up with the exact degree of the anterior tilt: “The ‘right amount’ of anterior tilt for you or your students in neutral-spine poses will lead to a gentle curve in the lower back.”

Tucking/scooping the tailbone, as commonly taught in these poses, is not beneficial to the function of the spine.

In mountain pose, then (and in other neutral-spine poses such as tabletop, plank, chaturanga, chair pose, downward facing dog, and staff pose), the pelvis should be tipped forward until the lower back curves in gently. “Tucking/scooping the tailbone, as commonly taught in these poses, is not beneficial to the function of the spine. In fact, that instruction, often given ‘to protect the back,’ makes it harder to engage the transverse abdominal muscle and the multifidus muscles which stabilize the back.”

Many of us deviate from neutral pelvic alignment in one direction or the other. “The average yoga student is ‘stuck,’ in either anterior or posterior tilt,” says Reif. In his physical therapy practice, he emphasizes pelvic mobility and spinal stability, working with his patients to undo the habits and free the muscular restrictions that keep them stuck in one particular tilt, since “A longstanding tilt in either direction is a likely cause of pain, injury, instability, or painful movement.”

Understanding a student’s starting point is important. As described in greater detail below, those of us who are stuck in a posterior tilt will need to move into more of an anterior pelvic tilt (by tipping the tailbone back until the lower back curves in) in order to come to neutral pelvic alignment. Those stuck in an anterior tilt, on the other hand, should move the pelvis posteriorly (by finding lower abdominal support, rather than by tucking).

2. Some of us are “stuck” in a posterior tilt. “Excessive sitting is one of the prime causes of a chronic posterior tilt,” according to Reif. Sitting restricts the movement of the hamstrings, causing tightness that pulls the sitting bones down, which then flattens or rounds the lower back. “The lumbar kyphosis (rounding of the lower back) associated with a posterior pelvic tilt can lead to back pain and disc problems, especially if it is maintained when you bend over to pick up something heavy, or you move into a deep forward fold in yoga class,” Reif says. He notes that men are frequently stuck in a posterior tilt, often coming to yoga with tight hamstrings and lower backs. 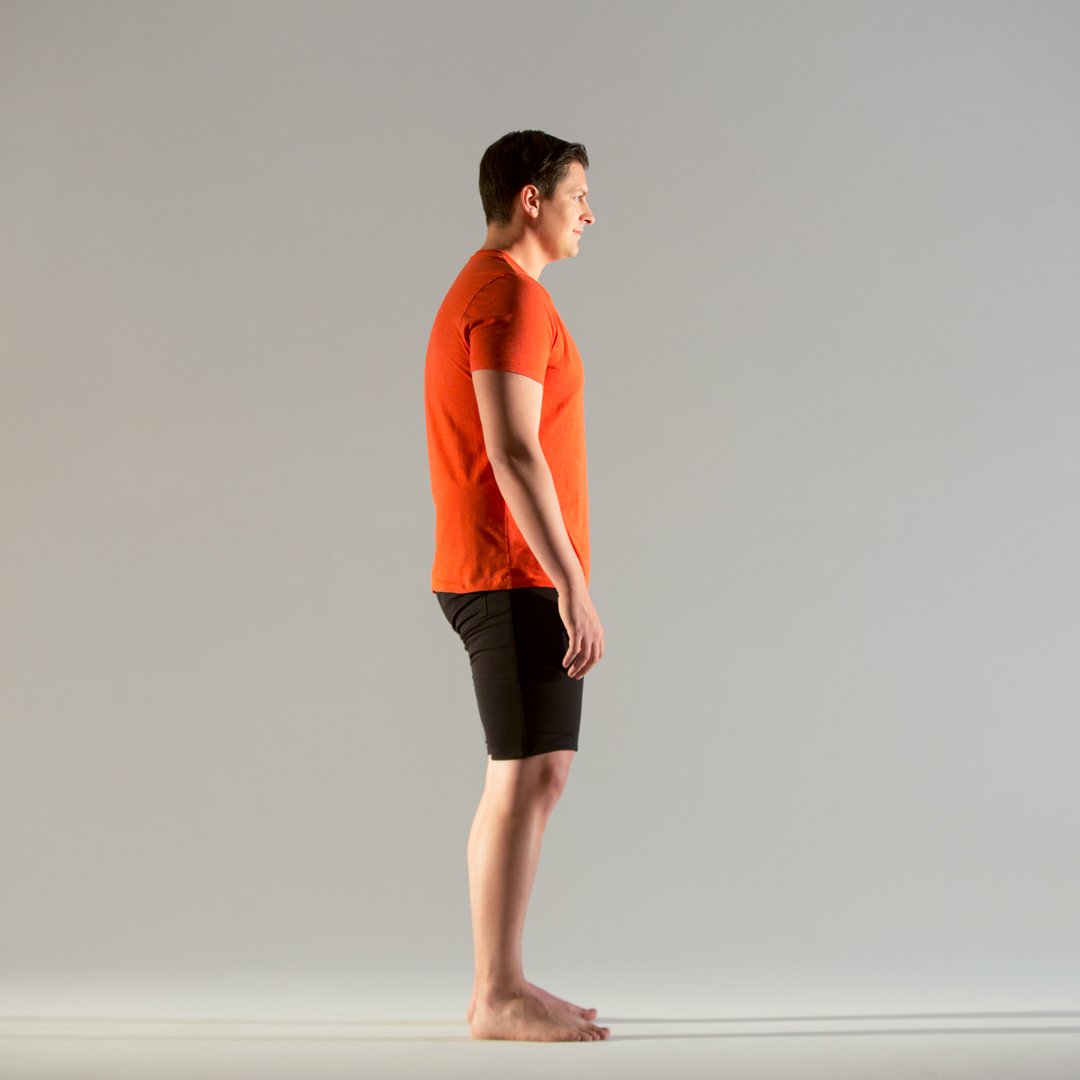 3. Some of us are “stuck” in an anterior tilt. “Our lumbar spines should have a mild anterior curve, which is known as a lordosis,” says Reif. “However, when this curve is excessive, it is a hyperlordosis, which is not ideal.” According to Reif, a chronic anterior tilt can be caused by “weak core muscles, wearing high heels, giving birth, the weight of a belly, as well as hip flexion muscle contractures, or spondylolisthesis (displacement of one vertebra).”

Both the causes and the consequences of this pelvic tilt are myriad. “Excess anterior pelvic tilt potentially leads to lower back pain, hip pain (because of the internal rotation of the femurs (thigh bones) this pelvic tilt necessitates), knee pain (because of the consequent knock-knee position), and flat or pronated feet. Excessive anterior pelvic tilt may lead to increased curvature of the thoracic spine (middle and upper back), and kyphosis there will put you at risk for neck pain, shoulder pain, and headaches. In short, you don’t want an excessive anterior tilt,” Reif counsels. He notes that women, especially after a pregnancy, are frequently stuck in an anterior tilt, with increased curves in their lower backs and tightness in their hip flexors and quadriceps. 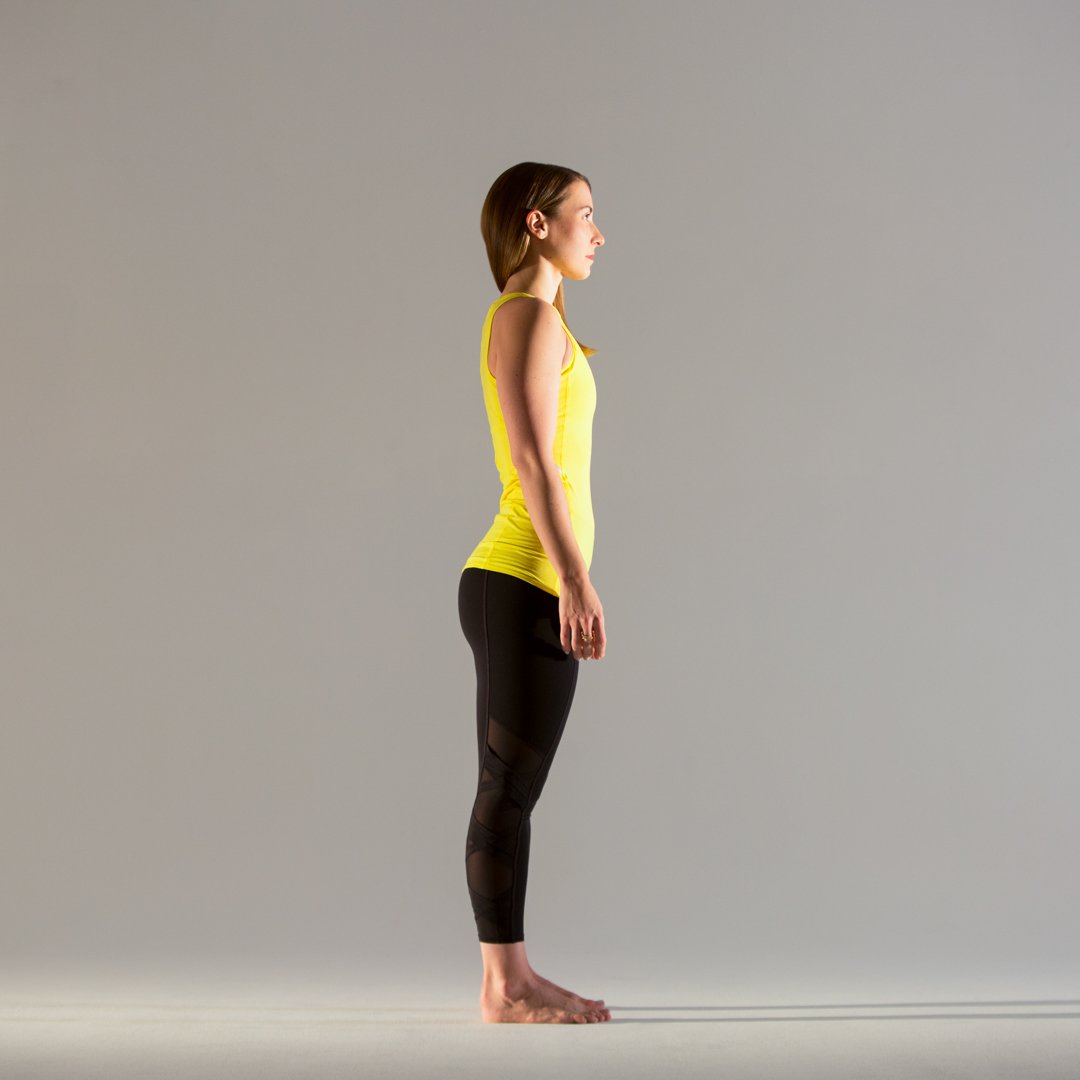 4. Students “stuck” in a posterior tilt can benefit from instructions and poses that move them toward a neutral pelvis. If we notice a posterior pelvic tilt and flattened lower back in ourselves or in our students (which may be more likely if we’re teaching men or older students)—encouraging the pelvis to tilt anteriorly will help move the pelvis into a desirable neutral position. Some students may be able to process an instruction to “Tilt the top of your pelvis/frontal hip bones forward,” but others may have difficulty isolating the muscular actions required to make that happen.

To bring a student stuck in a posterior tilt toward neutral in poses like mountain, plank, chair pose, and staff pose, beneficial instructions might include:

‌• “Tip your tailbone back until the lower back curves in.”

‌•“Press the tops of your thighs back.”

‌• or even “Widen your sitting bones.”

However, since muscular restrictions can make it difficult for some students to anteriorly tilt the pelvis, it may take more than instruction alone to bring those who are stuck in a posterior tilt closer toward neutral. Reif suggests that students in chronic posterior tilts stretch their hamstrings and lower backs to begin to allow more pelvic mobility. Rather than going into a deep forward fold to stretch the hamstrings (which will only reinforce their habitual posterior tilts and rounded lower backs—and might harm their lower backs), practicing hand-to-big-toe pose while lying down, with the help of a strap around the foot of the lifted leg, is a good way to begin to free their hamstrings. The lower back can be gently stretched while lying down, by bringing one knee, and then both knees, toward the chest. Foam rolling the hamstrings can also be valuable. (For further hamstrings advice, check out my article “10 Hamstring Myths Debunked.”) 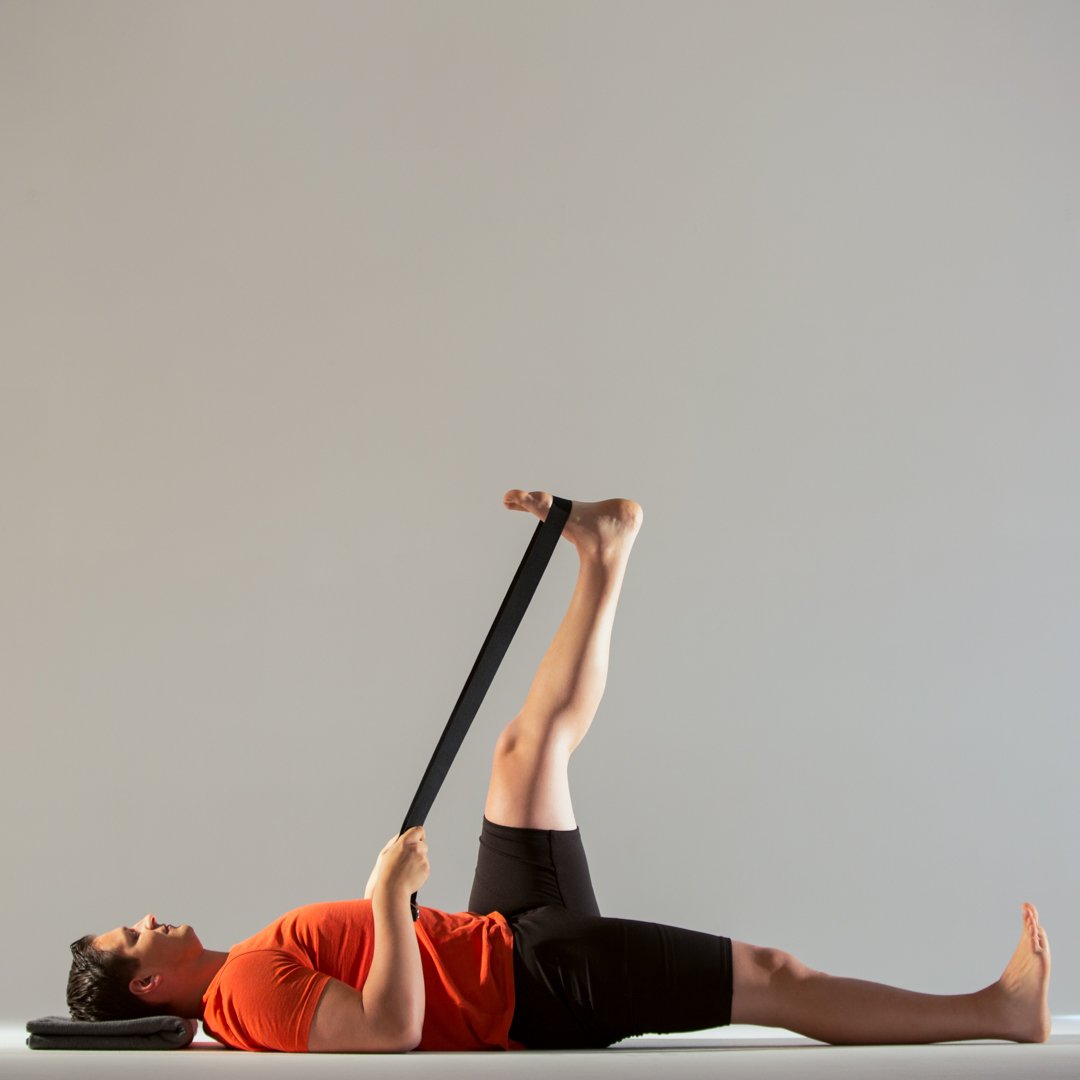 Supine hand-to-big-toe pose with a strap.

5. Students “stuck” in excessive anterior tilts can benefit from certain instructions and poses to bring them closer to a neutral pelvis.          Those who are stuck in excessive anterior tilts with exaggerated lumbar curves (common in, but my no means limited to, new mothers and those with weight around the belly), can benefit from instruction that aims to create a less exaggerated anterior tilt in poses like mountain, chair, and plank. Reif offers a cautionary note, however, about how to go about tipping the pelvis posteriorly:

“When trying to move students from an excessive anterior tilt toward neutral, a common mistake is to say ‘Tuck your tailbone,’ which engages the gluteal muscles, hamstrings, and hip rotators. It is better to use the ‘core,’ or deep abdominal muscles, to lift the front of the pelvis upward while keeping the gluteal muscles relaxed.”

To bring the pelvis from an excessive anterior tilt into a more neutral position (in a pose like mountain, chair, or plank), Reif prefers the cue, “Pull an imaginary drawstring around your waist tighter." He explains, “As you draw the string inward, you may notice the frontal hip bones lift slightly toward the ribs. Creating this action allows the transverse abdominal muscle and the deep muscles along the spine (lumbar multifidus) to work together to create balance in the spine. This in turn gives stability for each yoga pose.”

Moving from an excessive anterior tilt to neutral.

In addition to helpful instructions like these, those who exhibit an anterior tilt may require poses that stretch the hip flexors (psoas, iliacus) and quadriceps—such as low lunges with the back knee on the floor, warrior I, reclining hero’s pose, and dancer’s pose (perhaps with the help of a strap around the ankle of the bent leg). It is important, however, that a student with a chronic excessive anterior tilt does not create these poses by tipping the pelvis forward and curving in her lower back still more; rather, she should work to move closer to neutral by maintaining a light engagement of the lower abdomen throughout these stretches. Foam rolling the quadriceps may also be helpful. 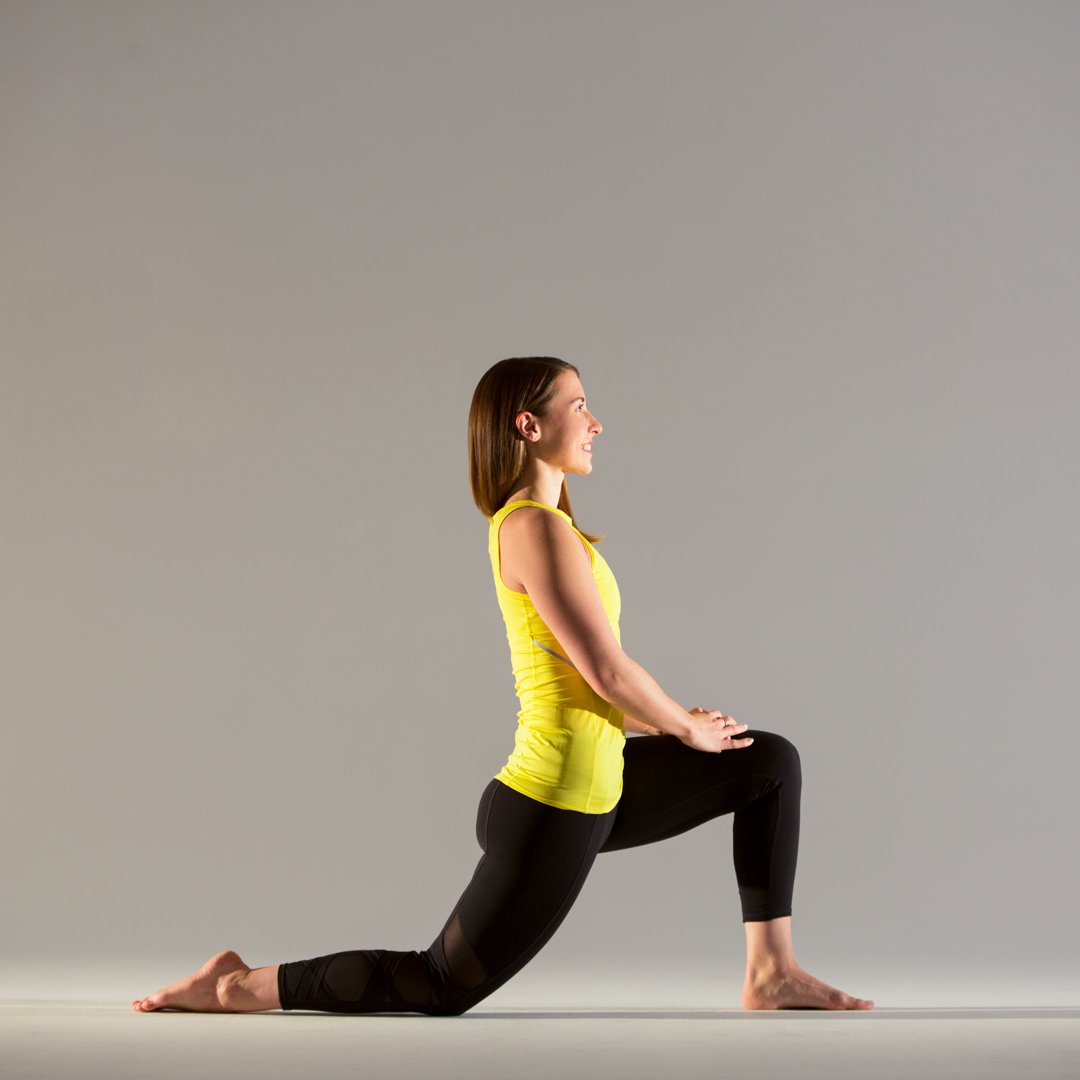 Low lunge with the back knee on the floor.

When we do the subtle work of moving our pelvises toward a neutral position in poses like mountain, we are creating a stable environment for the lower back.

“Your reward,” says Reif, “is the ability to perform better at work and in recreational activity, without having to worry about whether your back will ‘go out.’”