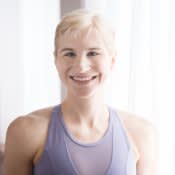 One of the best parts of my job here at Yoga International is regularly getting the chance to work with and learn from teachers I have long admired. Teachers like Rasa Yoga Founder Sianna Sherman. During the filming of her Asana Playground online workshop, I had the chance to sit down with Sianna to ask about an asana that I’ve found particularly challenging, yet intriguing—eka pada rajakapotasana IV, which is essentially a full split while catching the back foot in an overhead grip as in eka pada rajakapotasana (one-legged king pigeon pose). And as I might have guessed, I walked away with so much more than a list of preparatory poses and alignment tips (but don’t worry, she passed along plenty of those too!). I left with a newfound appreciation for asana—what it can represent, and how, ultimately, yoga practice is about so much more than trying to touch your foot to your head. It’s about tapping into the authenticity of our unique soul's journey.

As I mentioned, eka pada rajakapotasana IV is a combination of eka pada rajakapotasana and  (splits)—which is a big hamstring opener and, as Sianna reminded me, represents the heroic leaps of Hanuman (two of the most famous being his leap across the ocean from India to Sri Lanka and his leap from South India all the way up to the Himalayas to retrieve healing herbs).

Sianna explained that every time he makes an epic leap, Hanuman’s heart is full of devotion. That’s why Hanuman is considered the essence of bhakti yoga, the yoga of devotion. “To practice Hanuman’s yoga,” she said, “is to always ask, ‘How may I serve?’ When we experience those times in life when we’re asking, ‘What’s in it for me?’ the power of Hanuman is to flip that around and instead ask: ‘How can I serve? What am I devoted to?’ His power—and the heroic qualities he possesses, which allow him to accomplish these extraordinary feats—is really fueled by his own love and devotion, not by an external power. It’s entirely fueled by his heart.

“This pose—eka pada rajakapotasana IV—combines the leap of Hanuman with a gorgeous unfolding of the energy of the heart in the form of a backbend. That’s one reason I like to think of it as ‘Hanuman’s heroic heart pose.’ Another reason is that the name reminds us that we are all on our own hero’s or heroine’s journey—that all of us are in the alchemical process of our soul’s journey to unfurl the true power and essence of our heart energy. That journey requires a lot of courage and even warriorship—which is also related to Hanuman and to this pose.”

Preparing for the Pose

So what types of poses will prepare us for eka pada rajakapotasana IV?

After all, this is a pose that requires a lot of warm-up. Sianna stressed the importance of choosing poses that open up the shoulders, the heart area, the hamstrings, and the quadriceps, but emphasized that, “really, the most important factor is the power of the breath. And the quality of heart—the attitude we bring from inside to shape this pose from the inside out.” When it comes to working toward a challenging asana, who couldn’t use that reminder?

And for specific warm-ups and preparatory poses? “We want to choose those that open up the back of the legs, helping us prepare safe passage for the hamstring muscles,” she explained, suggesting standing poses like parsvottanasana (pyramid pose)—especially when the sole of the front foot is lifted (see below)—ardha hanumanasana (runner’s stretch), and even supine poses like , where you lie on your back and open up the back of the hamstrings.

It’s also important to open the front of the thighs, because eka pada rajakapotasana IV is an intense quad stretch. Sianna recommends preparing with similar, yet less intense, thigh stretches such as the twisted lunge variation below.

And because eka pada rajakapotasana IV is a very deep backbend, she stresses easing the way with other shoulder openers and backbends. She suggests for example, mermaid pose (see below), which mimics the form of eka pada rajakapotasana, dhanurasanas (bow poses), bridge poses, and urdhva dhanurasanas (upward-facing bow poses); pointing out that “all of those types of poses can help prepare the spine for the beauty of the extension that’s possible without compressing the low back while still really freeing the heart area.” As promised, here are four of Sianna’s favorite prep poses for eka pada rajakapotasana IV, along with some alignment pointers to consider for each. But first, here are the two criteria she says are important to keep in mind for all of these—and, really, for any asana:

(1) Where is the stability in the pose?

(2) How do we decompress and elongate the spine?

“Whatever the pose,” she says, “everything is in service of these two things. We always want to promote the longevity of our spine.” 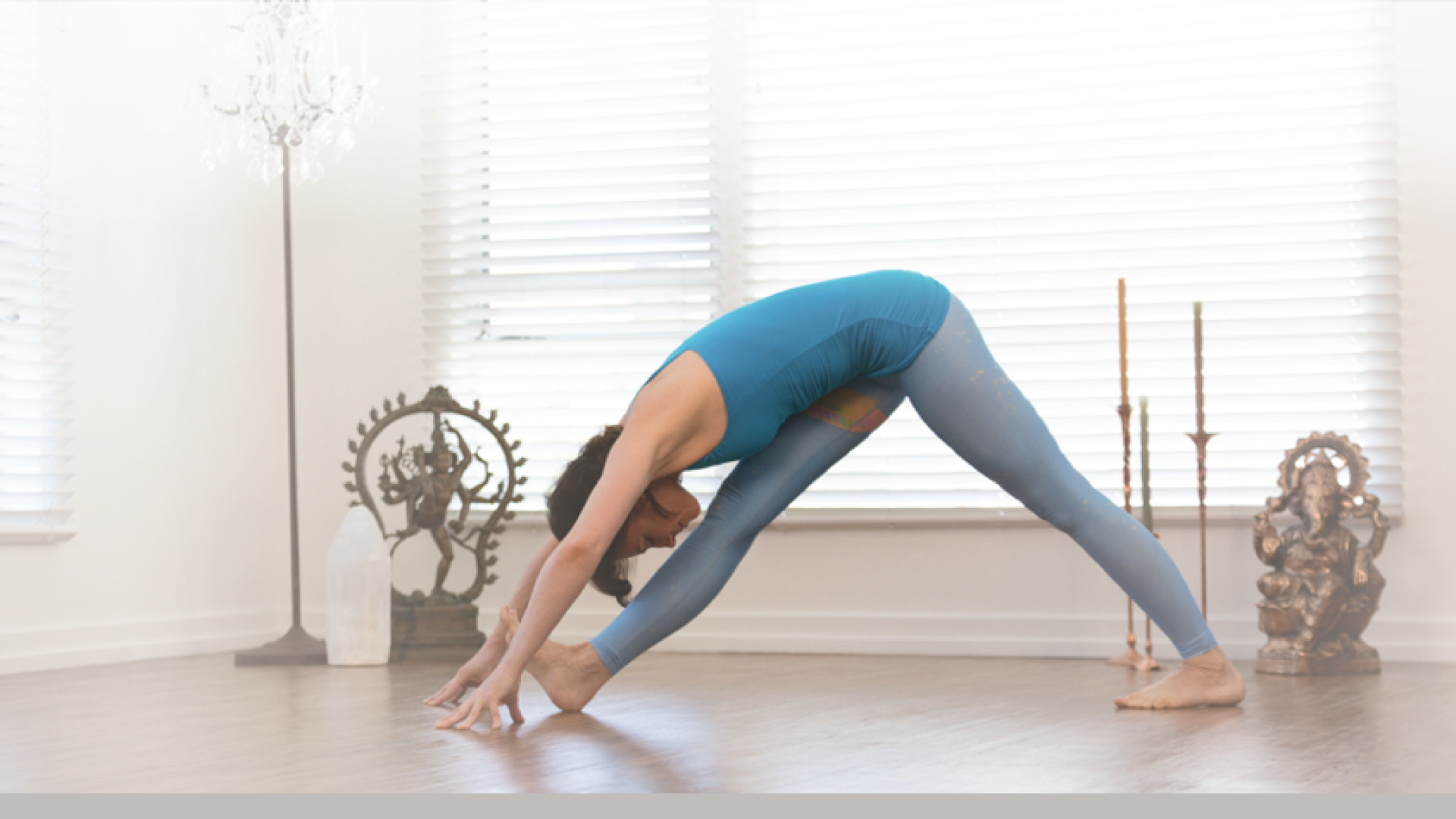 Sianna’s key alignment tips ‌• If you practice the form for the pose in which you dorsiflex the front foot (as shown in the photo above), press the front heel into the ground and resist it back. This hugs the muscle in the back of the leg to the bone so that the hamstrings feel safe before making their big “leap” (opening).

‌• Keeping that, create a widening in the front hamstring and sitting bone. Widen them away from the midline so that the pelvic floor can open.

‌• Now draw the front outer hip back and anchor the back of the buttocks down so that you have an evenness in the pose—an evenness through the pelvis, and an even stretching of the hamstrings as well. 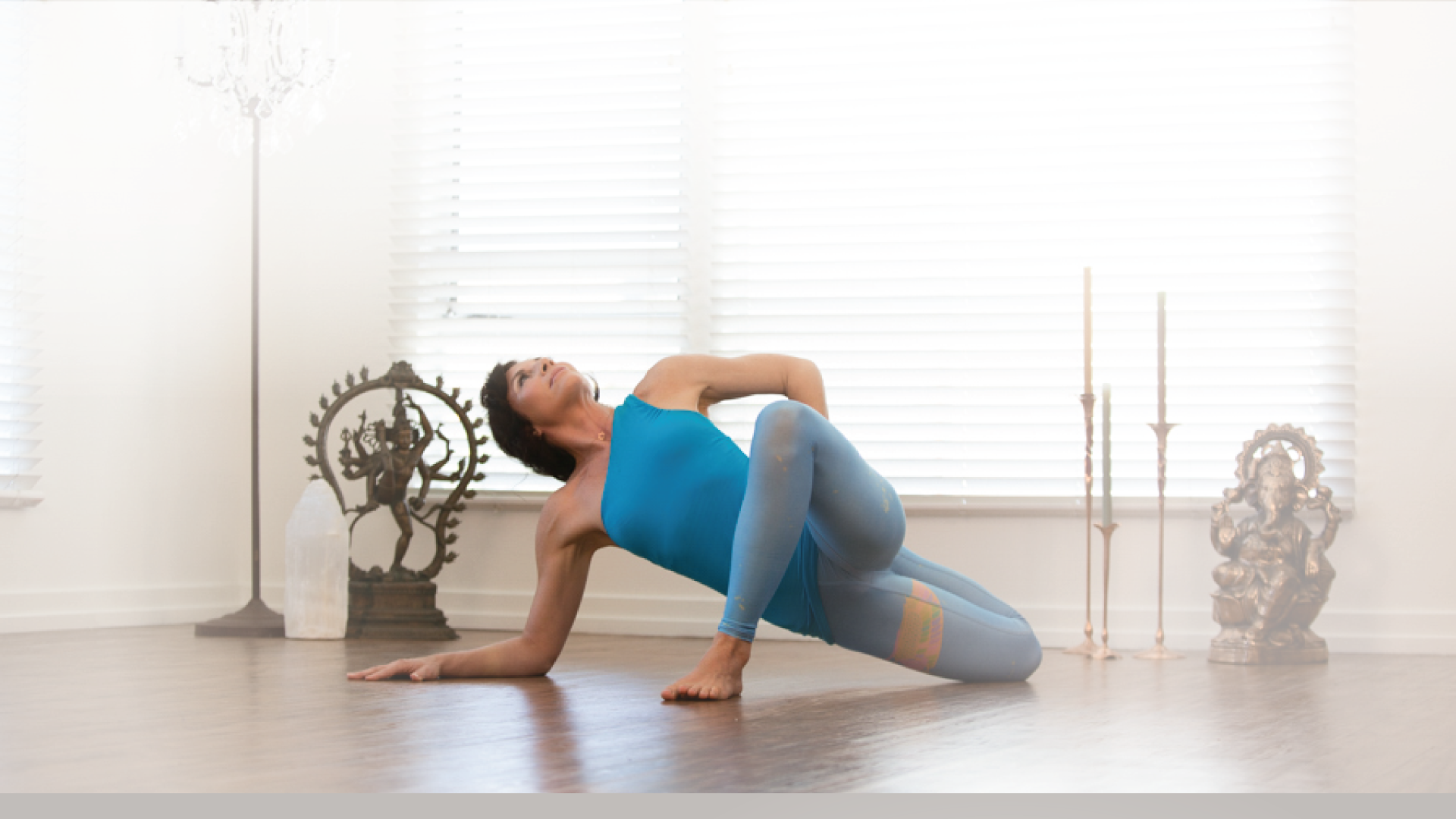 Sianna’s key alignment tips ‌• As you come into the pose and reach the opposite (left) hand to the right foot, kick the foot back into the hand to engage the front of the thigh. Kicking the foot back into the hand creates an isometric contraction through the quadriceps and up into the hip flexors. This makes the thigh stretch more effective so that the muscle elongates properly and you’re less prone to collapsing into the pose.

‌• Then, make sure to keep the heart very open by moving the head of the (left) arm bone back, and sweeping the (left) shoulder blade down the back of the heart, “so that you take refuge in the heart energy,” she says. 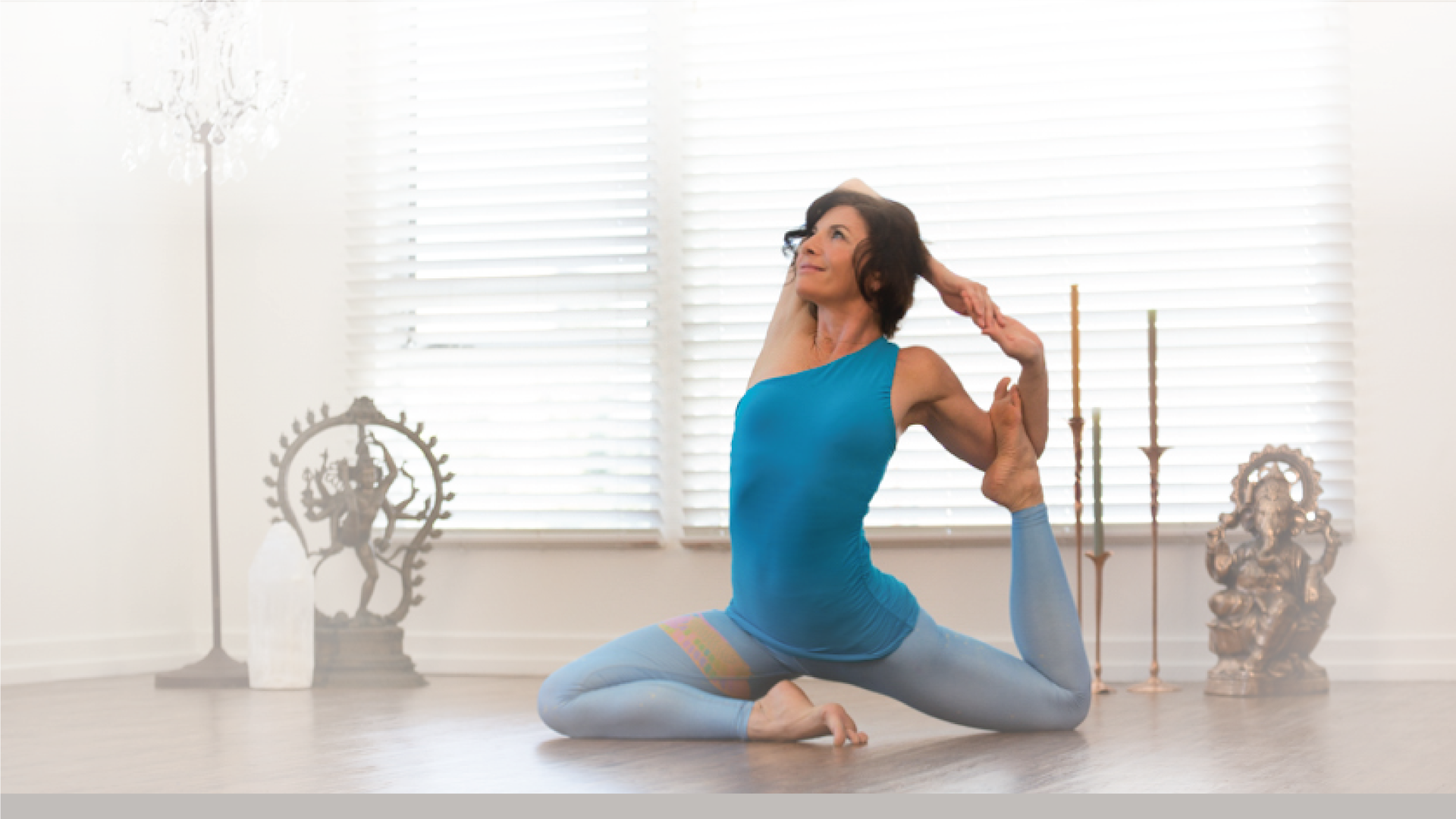 Sianna’s key alignment tips ‌• Do your best to square your hips, and then (similar to twisted monkey) kick the back foot back into your elbow crease. Then turn your torso forward, lifting up out of the low back to decompress the spine.

‌• Lift all the way up through your throat and sweep the shoulder blades down the back of your heart and in toward the base of your heart, giving you, as Sianna beautifully describes it, a “big freedom” by way of the opening in the mid-thoracic. “This pulls you out of the low back,” she says, “allowing you to take the full form and move into the backbend—like taking a big swim in the ocean of the heart.” 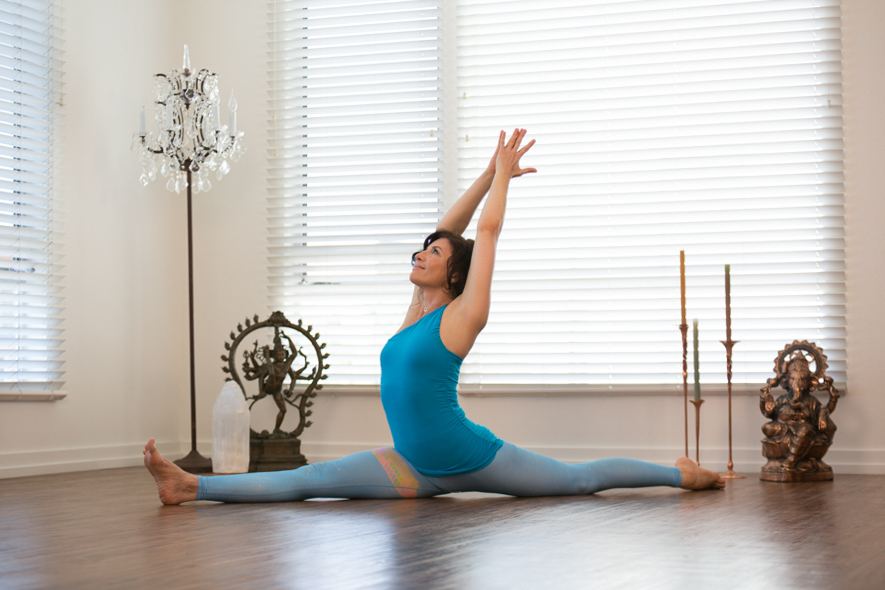 Sianna’s key alignment tips ‌• Pull the heel of the front leg down and draw it back (just as in parsvottanasana) so that the muscle energy (i.e., isometric contraction) creates a solid container before the full extension of the pose.

‌• In this pose, the back leg will want to turn out a lot, which will limit the expansiveness of the pose. Turn the back leg in, and widen the back sitting bone and thigh bone out to the side: first turn in your inner thigh, rolling it up to the sky, and then widen it away from the midline. This will set you up for the full extension of the pose.

‌• Square your hips as much as possible (the turning in of the back leg will help a lot). Draw the outer front hip down and back, and then extend out through both legs. 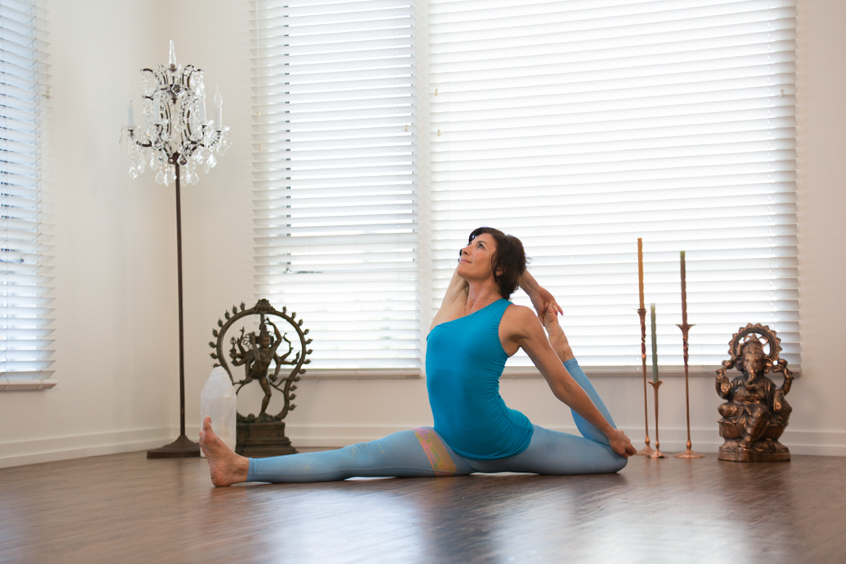 Practice with a hint of a smile. Remember your own heroic heart and that you are here to serve with the gifts of who you are. Bring your mastery, your beauty, and the essence of your heart into the world—and don’t hold back.

As for the biomechanics of the pose? She asks us to keep in mind that this is a deep pose. And:

‌• Lift up out of the low back as much as you can, all the way through the throat and the upper palate. Then press the head back, and move into the backbend, as Sianna puts it, “taking that big sweep into the ocean of your heart.”

‌• Then turn away from the back leg, and shine it full!

(Click here for tips on how to catch your back leg behind you with your hands overhead.)

Counterposes Because eka pada rajakapotasana IV is such a deep backbend, instead of taking a traditional, straight-legged down dog, Sianna likes to take a bent-knee form of down dog called “tiger dog.” “This form of the pose lets you focus on getting the inner thighs back while maintaining the low back (i.e., lumbar) curve as well as strong tone through the navel. Then you extend your spine as long as you can,” she explains. “This variation is about actively engaging the posterior-chain muscles, while giving as much length to the spine as possible.”

She suggests staying for a few breaths and then transitioning to your regular downward-facing-dog pose.

After that, Sianna says, one of the best poses you can do is a simple pigeon pose with a forward fold. “You don’t have to go into a deep pigeon, but just the nice, basic form. When you fold forward, you’ll be getting some extension of the spine, but you’ll still be in a form similar to what you’ve been in so that it’s not an extreme flexion of the spine yet. But the hips will have a lot of space to open and you can focus on lengthening out through your back.”

Next, a standing wide-legged forward bend (prasarita padottanasana). “The wide-leg stance is wonderful for releasing and tractioning the spine,” she says.

After that, child’s pose. Then you can go into your seated or supine poses. “What I’ve mentioned are the really key things, but you have plenty of space to finish with a flow that feels good to you,” she emphasizes. “You just want to make sure you’re not going from extreme extension (backbending) to any type of pose that limits the opening of the pelvis because that will push the sacrum posterior and you will loose the posterior chain power that you've built. You want to hold that power, moving progressively toward the full-flexion poses. The sequence of counterposes I suggested will let you do that.”

I can honestly say that applying Sianna’s alignment and sequencing suggestions helped me to feel more comfortable, stable, and confident in my own practice of eka pada rajakapotasana IV—transforming it from a frustrating shape that I could “kind-of-sort-of-do sometimes,” into an empowering asana that I fully enjoy and look forward to.

But most important of all was Sianna’s reminder to tap into my own heroic heart, and to remember that yoga practice is about so much more than trying to touch my foot to my head. To remember the question: “How can I serve?” And to allow my devotion to my practice support my commitment to that wider service.

Kat Heagberg is the editor of Yoga International, co-author of the upcoming book and Your Life with... Read more