Freedom in Movement: A Teacher's Story of Finding Yoga in Prison 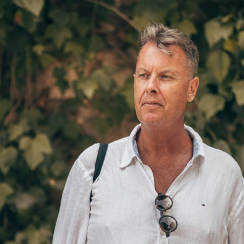 When COVID-19 hit and yogis went into lockdown, many of us struggled to find a new relationship with our practice. But for Nick Brewer, whose practice was born in confinement, the anxiety and uncertainty that came with quarantine were nothing new.

Nick, now the founder of the Primal Movement, a school based in Ibiza, Spain, discovered yoga when he was in an Argentinian prison serving a six-year sentence for cocaine smuggling. He spent four of those years in isolation for 20 hours a day.

Originally from Essex in the UK, Nick, now 50, had been a member of the UK ski team. At one point, his future potentially included the Olympics. The skiing career he’d dedicated his teenage years to came to a dramatic end when he broke his back in two places and was dropped from the team.

Six years later, Nick got into motocross and broke his back again. After he took up skydiving and freefalling, he broke his legs and shoulders.

“I kept breaking myself,” he says. “I was in my period of self-destruction. I only really got into smuggling in 1990, after I’d given up skiing completely, because it was high adrenaline, high octane stuff. Now I think I was also subconsciously trying to hurt myself.”

Nick was imprisoned in 2004 when he was 33. When his practice “found” him, as he puts it, he had no idea what he was getting into. But he intuitively knew it would be a gift. Then someone sent his cellmate a book on yoga. Nick seized upon it immediately.

Once Nick became fascinated by yoga, his family sent him more books including the Yoga Sutras of Patanjali and the Hatha Yoga Pradapika along with others on Hatha, Iyengar and Ashtanga yoga, anatomy and more. Reading these books helped him integrate everything he was learning.

Over thousands of hours, Nick went deeper and deeper into yoga.

After studying yoga asana for some time,  Nick also began a meditation practice. Learning to still his body led Nick to learn to still his mind, and he was helped by a book of conversations with Indian Hindu sage Sri Ramana Maharshi.

Nick also embraced yoga philosophy, including the yamas and niyamas (ethical observances outlined in the Yoga Sutras of Patanjali), to help him learn how to lead his life.

The practice and philosophy set Nick free even while he was in prison. “Ever since 2008, four years into my term, I’d known freedom was a state of mind,” he says. “The doors inside me had opened up and I’d become a free being, although I was locked up. The meditations and asanas I’d practiced alone for all those thousands of hours had changed me so much I’d shed my old self. And I knew that, when I got out, I wanted to integrate those practices into the lives of as many other people as I possibly could.”

The practice and philosophy set Nick free even while he was in prison.

When Nick finally left prison in 2010, he wasn’t officially released but taken directly to Buenos Aires airport and unceremoniously bundled onto a jumbo jet to the UK with just $100 in his back pocket.

Nick felt no shame about going to prison. “I know why I ended up there,” he says, “and I deserved it. I learned to forgive and love myself. When I did this, life became beautiful again.”

Back in London, Nick began teaching yoga, starting with one client. A year later he was guiding an average of 25 sessions a week. He then opened a studio in a pub where, in his smuggling days, he’d once partied. For the next six years, his classes and private sessions were in high demand.

In 2016, after six years of getting up at dawn and whizzing around London, Nick felt burned out. One of his yoga clients, who Nick describes as almost a mentor, offered him a job in Ibiza as a property and investment consultant. Nick took it.

Despite the fact that his life had changed dramatically once more, Nick continued his practice and meditation before work. And it seemed that there was no escaping his mission to teach.

“As I began to make friends in Ibiza,” he says, “people started coming to my house to train with me. I’d go out onto the terrace to do my own practice and there would be six people waiting to train. I thought it was great. One morning 20 people were waiting for me and I finally understood that I couldn’t escape my dharma. My way in life is to integrate movement into people’s lives. I told my mentor I had no choice but to go back to teaching. He understood.”

Nick found an old warehouse in Ibiza and, with the help of a friend, converted it into a movement studio. This became Project Ibiza, where Nick was teaching when COVID-19 hit the island in March 2020 and Ibiza went into lockdown.

By this time, after undertaking three different teacher trainings, spending months at ashrams around the world, and studying anatomy, Pilates, gymnastics, handstands, and taking Cirque training, Nick, as he puts it, “knew my way around the human body and how it worked.” This all led to Primal Movement, his own method.

Nick’s time in prison has given him a profound sense of what it means to be isolated and the effects isolation can have on the body and mind.

“The fear it creates raises cortisol levels that compromise the immune system,” he explains. “Peoples’ minds are climbing the walls, like mine was before yoga found me. When we were locked down, I knew I had to offer classes online that gave people a way to get out of their heads, that released dopamine and serotonin. I was in a prison cell for six years. I know how to train in confined spaces.”

Based on his prison cell workouts, Nick’s “get out of jail free card” classes on Instagram became hugely popular, attracting thousands of people from all over the world. Today, his followers number almost 9,000.

Formerly a social media novice, Nick was taken by surprise by his success online. He grasped the opportunity it offers with both hands.

“My way of thinking changed when I realized I could reach out to not just 30 people at the studio but thousands around the world,” he says. “The feedback I got was amazing. People told me that practicing with me had made their backache go away. They felt strong, healthy, fit and happier. I love that.”

After lockdown was lifted in Ibiza and Nick was able to reopen his studio, he stopped the online classes. But he has left almost 40 sessions on his IGTV channel. These can be accessed free of charge, though Nick invites donations via PayPal.

Although Nick offered classes online purely to help people with no intention of receiving anything back in return, the exposure has transformed his life and his business.

“As soon as my studio reopened, I went from doing zero private lessons to 100 a month,” he says. “Over the summer, I did 400 privates which was awesome. Now there’s a studio in Milan that wants to offer Primal Movement. I’ve been offered a residency by the Nomad group of hotels who want me to teach it in their hotels in Tulum, Mexico, and Portugal and create a community.”

When I asked if he’s tempted to create a certified training system for Primal Movement, Nick said, “People have approached me about that. But although I did develop the system myself, it’s really only freedom of movement and different variations on what’s gone before that have become fashionable as people look for something different and, in these times, perhaps want to move away from regimentation. I don’t want to develop a formal training, and I certainly wouldn’t attempt to patent moves. What I would like is as many people to benefit from practicing Primal Movement as possible. I’ve been approached about offering access to my content via an online platform for a small monthly fee—say $10. I’d love for that to happen.”

I’d say that, for all of us, getting on our mats in the first place is maybe more important than what we do once we’re there.

Yoga continues to sustain and support Nick as he looks toward an uncertain future.

As he puts it, “All I can say is that my mat is my daily medicine. Yoga sustained me through incarceration, isolation, and the uncertainty that followed when I was released into the outside world. Now just taking that first step onto my mat gets me out of the jail in my head and makes me appreciate my freedom. I’d say that, for all of us, getting on our mats in the first place is maybe more important than what we do once we’re there. It doesn’t matter whether we’re feeling tired or full of life, we’re getting out of our heads and reconnecting to our body through breath and movement. We’re breaking old patterns and forming new ones. And we’re more centered, present, and reconnected to something greater than the confusion in our own heads and in our world.”